The presence of Russian T-72B3 tanks in eastern Ukraine has previously been established and covered on Bellingcat. The tanks have reportedly been used near Ilovaisk, the Luhansk airport and even Debaltseve. The T-72B3 represents post-Soviet tank development by the Russian Federation, and was not exported to or fielded by Ukraine.

Another post-Soviet development with its root in the T-72 program is the T-90 main battle tank and its variants, currently representing the peak of armored warfare capability of Russian ground forces. First production versions of the T-90 were produced in 1992, and during the lifetime of the program a few export models (e.g. T-90S, T-90SM) have been produced. These have not however been exported to Ukraine, where the domestic military industry worked on other modernizations based on e.g. the T-72 and T-80.

A distinctive feature often associated with the T-90 family tanks are “glowing eyes” on the turret. These “eyes” are the electro-optical interference emitters of the Shtora-1 active protection system, intended to disrupt the guidance systems of anti-tank guided missiles (ATGMs). Another main battle tank equipped with the Shtora-1 system is the Ukranian T-84. Thus, the presence of the system alone is not enough to establish a tank as Russian of origin, but differential identification with other features of the tank needs to be done. In the case of T-90 and T-84, the protective configuration on the turrent is significantly different, as the explosive reactive armor (ERA) elements on the T-90s turret have a distinct wedge shape. The smoke launcher configuration is another feature that can easily be compared. To distinquish between different main variants of the T-90 tanks, the composition of the turret can be examined. The turrets of early T-90 tanks were manufactured by casting the metal, which leaves the turret with round shapes. By contrast, turrets on newer variants such as the T-90A are manufactured by welding, giving the turret sharper edges. These differences are illustrated below.

The rounded shape of the cast turret causes the ERA not to be completely aligned on the early manufacture T-90s, while on the welded turret of the T-90A the ERA elements are aligned neatly. The position of the top two smoke projectile launchers are also slightly different between the T-90 and the T-90A.

In the summer of 2014, reports of T-90 family tank sightings in eastern Ukraine started to appear. A Telegraph article cites a Ukrainian activist with the words: “Lugansk. We are retreating. Long convoys of tanks […] The men have endured a battle with a battalion of new Russian T-90 tanks”. Until 2016, there was only limited visual evidence supporting the claims.

One piece of visual evidence has surfaced in the form of a YouTube video, reported to have been filmed on August 25th, 2014. That would place the video’s filming date towards the end of Battle of Ilovaisk, meaning a phase of active hostilites between the forces. A noteworthy fact is that a number of Russian tanks were destroyed during the battles. The exact filming date however is difficult to determine without access to the original source, but the video can be geolocated to confirm the filming location.

The existence of the video was first reported by Ukrainian conflict researcher Askai707, who tweeted about it on 21.11.2016. At the same time, he posted a geolocation of the video, documenting the presence of T-90A tanks in the conflict zone. The video was filmed near a railroad crossing south-east of Lyse (48.469797 39.596891), a small Ukrainian locality in the Luhansk oblast. 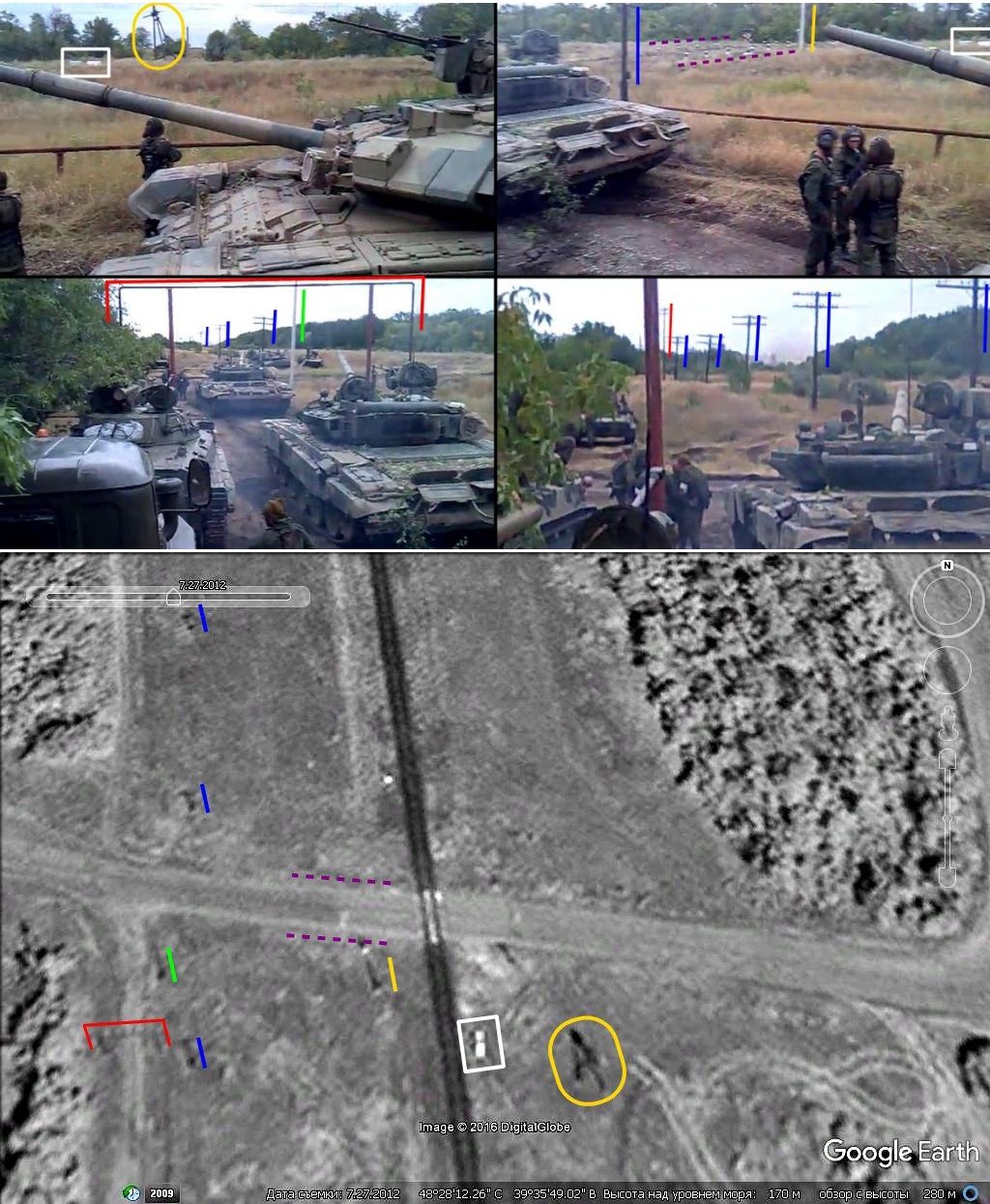 As mentioned earlier, the video was allegedly filmed on August 25th, 2014. According to situation update by Ukraine’s NSDC for the date, Ukranian positions were holding at Novosvitlivka – just 6 km west of Lyse where the video has been filmed. Proximity of hostile forces could thus be one explanation of the uncovered elements of the Shtora-1 countermeasure suite. 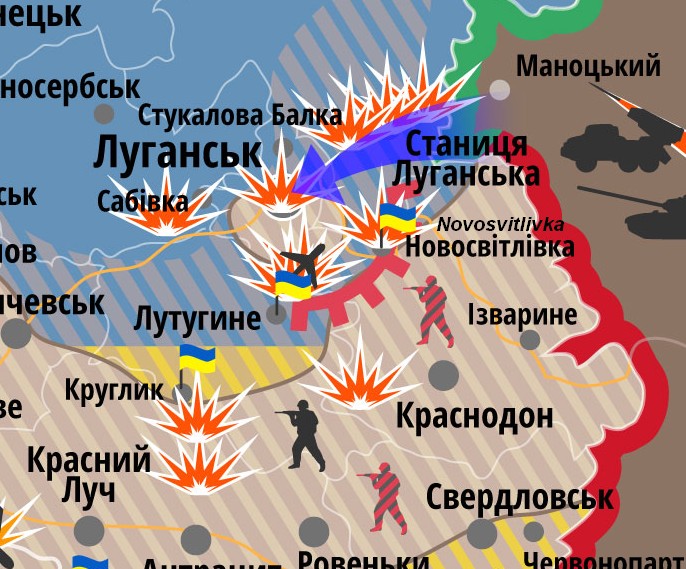 Situation in eastern Ukraine, according to Ukraine’s NSDC on August 25th, 2014. (Source)

The presence of Russian servicemen from the 136th Motorized Infantry Brigade in this area was previously documented by Askai707. The same brigade also operates T-90A tanks. Both InformNapalm and Askai707 had established that tanks of this brigade operated in eastern Ukraine in summer 2014. The imagery also shows T-90A tanks, however the geolocatable imagery only shows parts of the tank or the rear on an open road. The position of the geolocated imagery is depicted below: 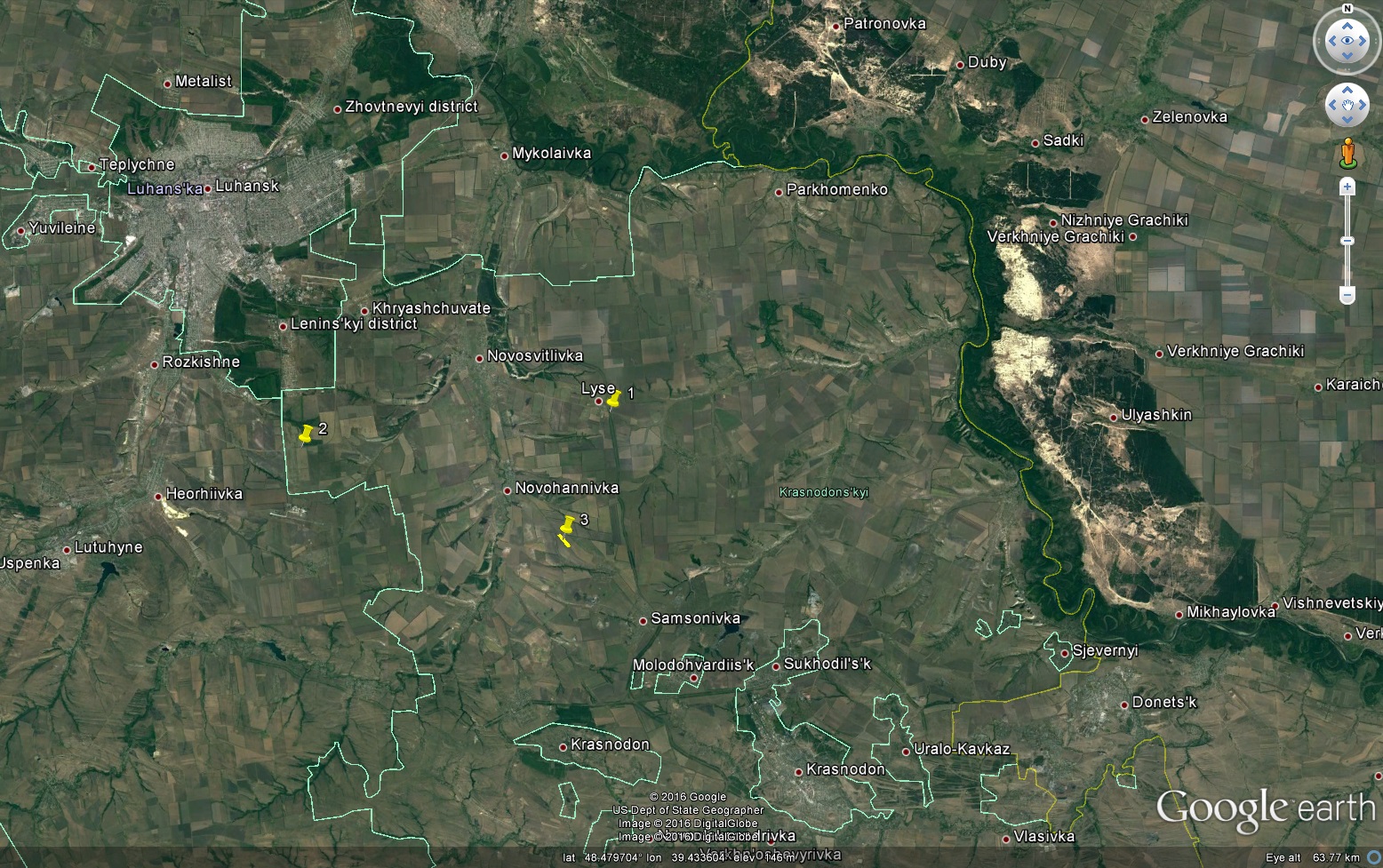 The position marked with (1) is the new video discussed in the article, (2) shows a soldier on top of a tank near a road sign, and (3) marks the position of T-90A tanks on the move on the road. The imagery always shows tanks with a similar camouflage scheme. Additional imagery also showing a T-90A from the front is known. While these imagery shows “soldiers” with white arm bands in front of the tank indicating that it was made in eastern Ukraine and other imagery from the same account shows the Luhansk airport after the capture, it was not possible to satisfactorily geolocate the imagery. 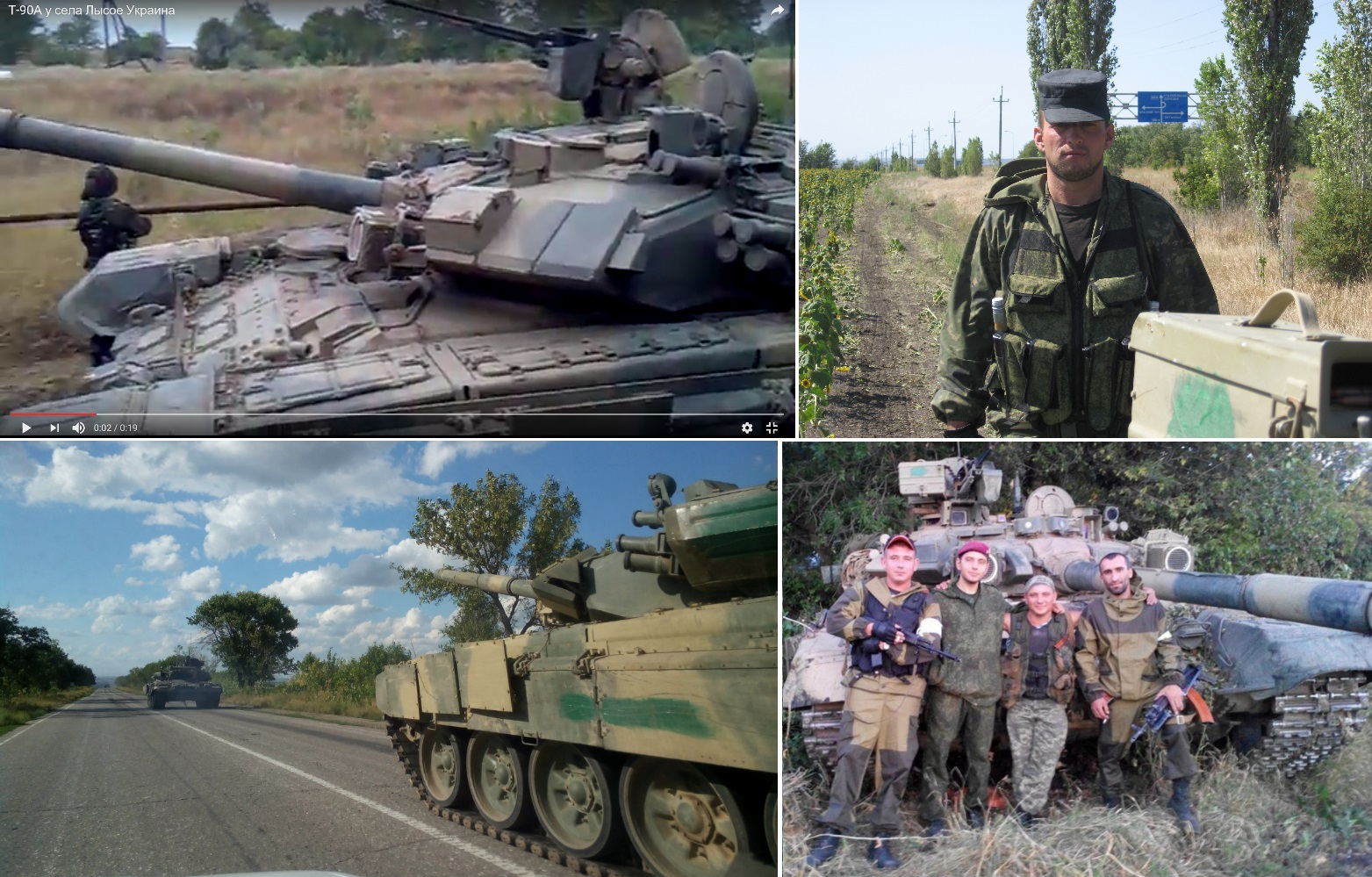 In summary, the sightings and analysis compiled by Askai707 and InformNapalm during the war in Ukraine clearly documents the presence of T-90A tanks, likely from the 136th Motorized Infantry Brigade, in eastern Ukraine during the summer of 2014. At least three tanks of this type operated in the area. The T-90A is one of several examples of military equipment that appears to have been moved from Russia to the conflict zone in Ukraine to assist in the fight against Ukrainian government’s forces, in addition to the earlier reports of T-72B3s, as well as TOS-1 multiple launch rocket systems in the Donbass.

Thanks to Klement Anders for the initial research and write-up.