In the coming weeks it is expected the OPCW Fact Finding Mission (FFM) will release its report on the April 7 2018 chemical attack in Douma, Damascus. The purpose of the OPCW FFM is to establish whether or not chemical agents were used, not to assign blame. Prior to Russia vetoing its renewal at the UN Security Council, the OPCW-UN Joint Investigative Mechanism (JIM) would have investigated any chemical incidents that had been deemed likely to have occurred by the OPCW FFM, but without the OPCW-UN JIM there is no official mechanism for investigating and assigning responsibility for chemical attacks.

Since the OPCW-UN JIM was not renewed, the OPCW FFM has reported on two chemical attacks, the March 30 2017 attack in Al-Lataminah, Hama, where it concluded “that sarin was more than likely used as a chemical weapon”, and the February 4 2018 attack in Saraqib, Idlib, where it concluded that it was likely chlorine was used as a chemical weapon. While the OPCW-UN JIM did not investigate either incident, Bellingcat has examined both incidents in detail, and concluded the Syrian government was responsible for both the Al-Lataminah and Saraqib attacks, with details in the OPCW FFM Saraqib report revealing the likely use of Sarin, along with chlorine, in the attack.

Without the OPCW-UN JIM, it is still possible to draw conclusions about who was responsible for attacks based on open source evidence and details published in previous OPCW FFM and OPCW-UN JIM reports. For example, Bellingcat concluded that the Syrian government was responsible for the Al-Lataminah attack based on a number of pieces of evidence. A specific design of filling cap documented by the OPCW FFM report on Al-Lataminah was also documented by the OPCW-UN JIM at the April 4th Khan Sheikhoun Sarin attack site, and described by the OPCW-UN JIM as “uniquely consistent with Syrian chemical aerial bombs”. “Marker chemicals”, described in the OPCW-UN JIM report on Khan Sheikhoun as “a strong indicator that the sarin disseminated in Khan Shaykhun was produced from DF from the Syrian Arab Republic stockpile”, were also found in samples examined by the OPCW FFM in their investigation of the Al-Lataminah attack. While it is not explicitly stated in the OPCW FFM report on the Al-Lataminah chemical attack that the Syrian government was responsible, there is plenty of information in their report to draw a solid conclusion.

The upcoming OPCW FFM report on the Douma chemical attack may also contain information that allows conclusions about the chemical agents used and the origin of the attack to be drawn.

Signs of Chlorine and Sarin

Unlikely many chemical attacks, the OPCW FFM was able to access the sites where yellow gas cylinders reportedly used in the attack were found, and take samples. The OPCW FFM may also have acquired biomedical samples taken from victims, and biomedical and environmental samples provided by local groups. It is from these samples it will hopefully be possible to establish which chemical agents were used. 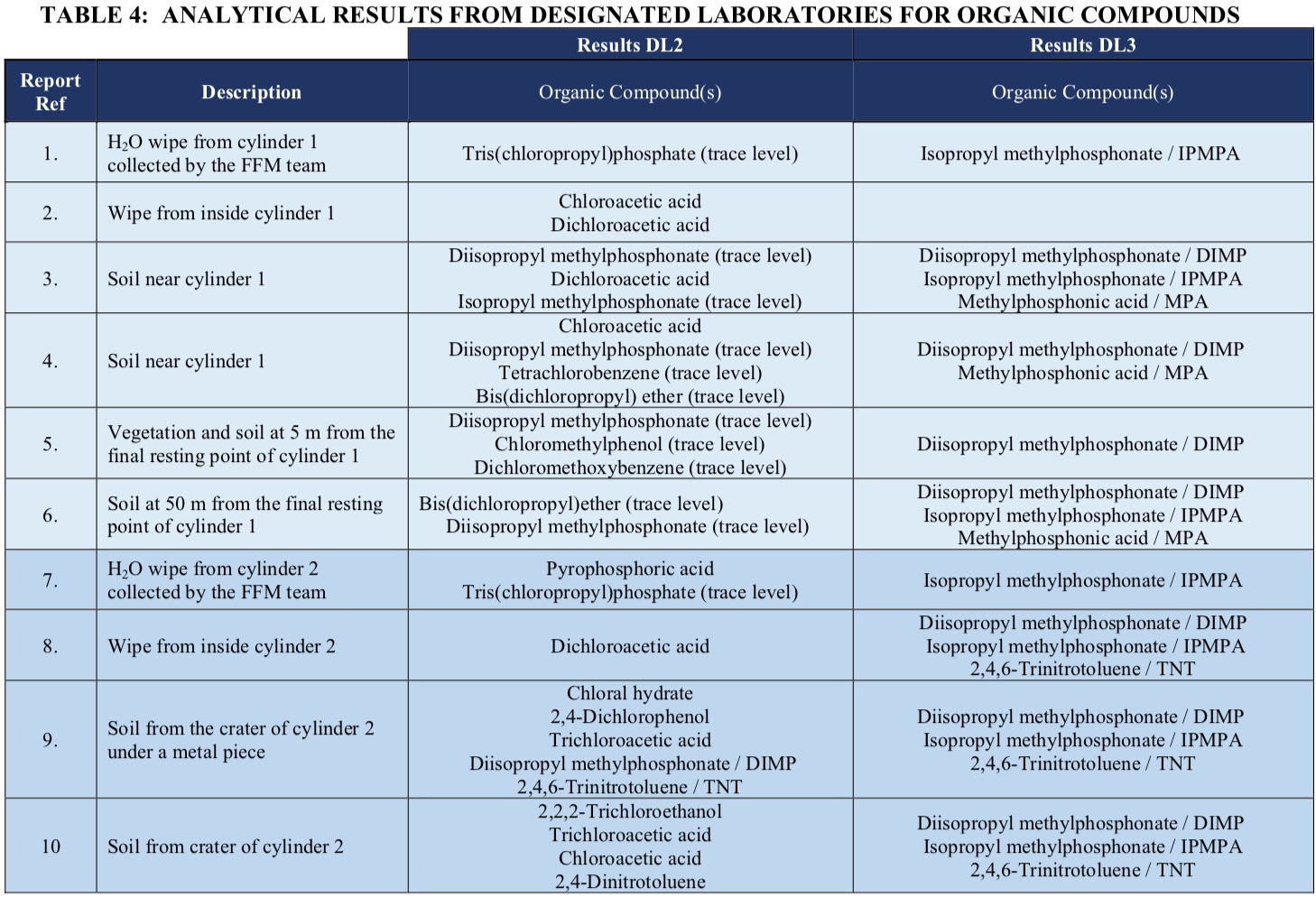 What stands out in these tables are not the chemical products related to chlorine gas, but the chemicals abbreviated to DIMP, IPMPA, and MPA. These are not associated with chlorine gas, but have been detected in all Sarin attacks in Syria where chemical analysis was performed by the OPCW, including the August 21st 2013 Damascus attacks, the March 30th 2017 Al Lataminah attack, and the April 4th 2017 Khan Sheikhoun attack. The French National Assessment following the Khan Sheikhoun attack also include analysis of the munition used in the April 29 2013 Sarin attack in Saraqib that detected DIMP in the presence of Sarin.

What this tells us is the Saraqib chemical was not just a chlorine attack, but almost certainly included the use of the Sarin. Symptoms from the Saraqib attack also indicates the likely use of Sarin, or a Sarin-like substance, with one symptom presented by all victims being constricted pupils, one indicator of Sarin exposure, not chlorine exposure: 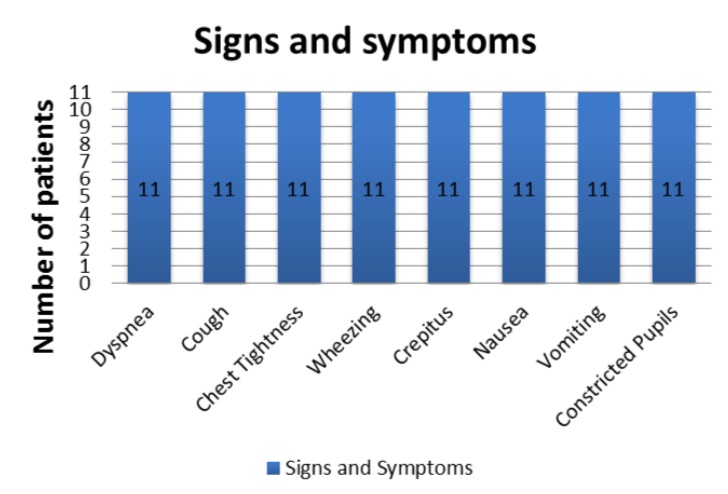 It has already been claimed by Western governments and local organisations operating in Douma that chlorine and a nerve agent were used in the April 7th attack, so the presence of chemicals related to Sarin, and symptoms consistent with the use of Sarin would be extremely significant. Unlike Saraqib, it is possible that biomedical samples were tested by the OPCW FFM, and previous OPCW reports contain test results from bio-medical samples taken from victims of Sarin attacks. In the OPCW-UN JIM report on the April 4 2017 Khan Sheikhoun Sarin attack multiple blood samples were recorded at testing positive for Sarin or Sarin-like substances, while urine samples tested positive for Isopropyl methylphosphonate (IMPA), a degradation product of Sarin.

Biomedical samples taken from the corpse of a victim of an earlier Sarin attack in Saraqib in April 29 2013 and published by the United Nations Mission to Investigate Allegations of the Use of Chemical Weapons in the Syrian Arab Republic provides information about what might be detectable when a victim has died: 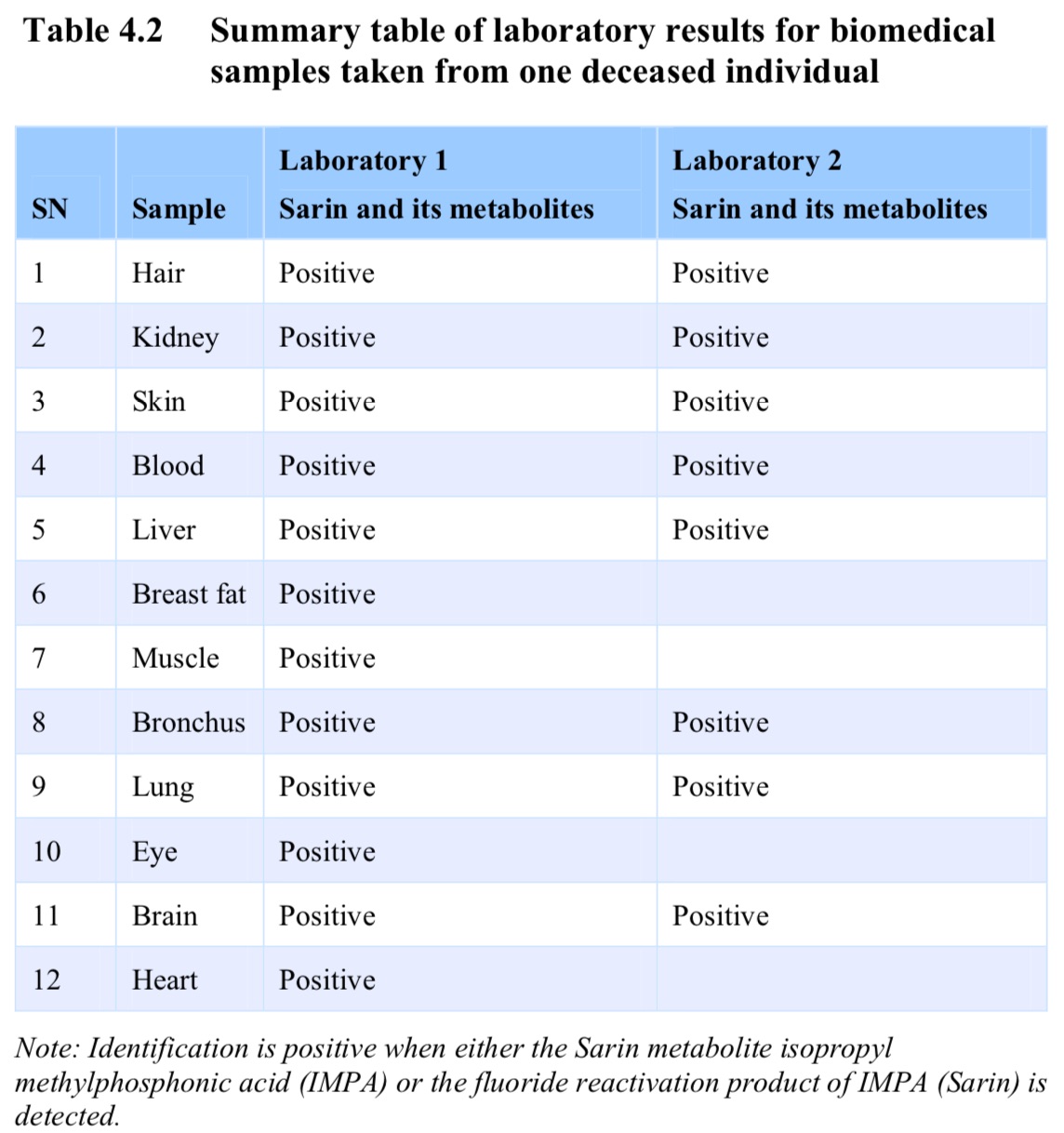 IMPA again is used to confirm the use of Sarin in a chemical attack, and if IMPA is detected in samples from the Douma chemical attack it will be clear that Sarin was used. The question is then, where did the Sarin come from?

The OPCW-UN JIM report on Khan Sheikhoun describes three chemicals found in tests of samples from Khan Sheikhoun as chemical markers which presence is a strong indicator “that the sarin disseminated in Khan Shaykhun was produced from DF from the Syrian Arab Republic stockpile.” These chemicals are:

Importantly, the presence of HFP is evidence “that HF [hydrogen fluoride] was used to produce the DF that was the precursor for the sarin” and “HF is a very aggressive and dangerous gas and is, therefore, difficult to handle. The use of HF indicates a high degree of competence and sophistication in the production of DF and points towards a chemical plant type production.” The report also states:

Moreover, the results confirm that sarin was produced by the binary route, in which DF is combined with isopropanol (iPrOH) in the presence of hexamine.

Phosphorous hexafluoride (PF6) appears in samples from the March 30th 2017 Al-Lataminah attack, along with Isopropyl phosphorofluoridate, a second marker chemical described in the OPCW-UN JIM’s Khan Sheikhoun report, and Hexafluorophosphate (HFP) was present in samples from several metal pieces and munition fragments from August 21st 2013 attack sites, according to the UN report on the attack.

The presence of these chemicals in samples taken from Douma would not only confirm Sarin was used, but the Sarin came from the stockpiles of the Syrian military. Syria has repeatedly denied losing control of its chemical weapons stockpiles, so this would be the strongest possible indication that the Syrian government was responsible for the April 7 2018 Douma attack. 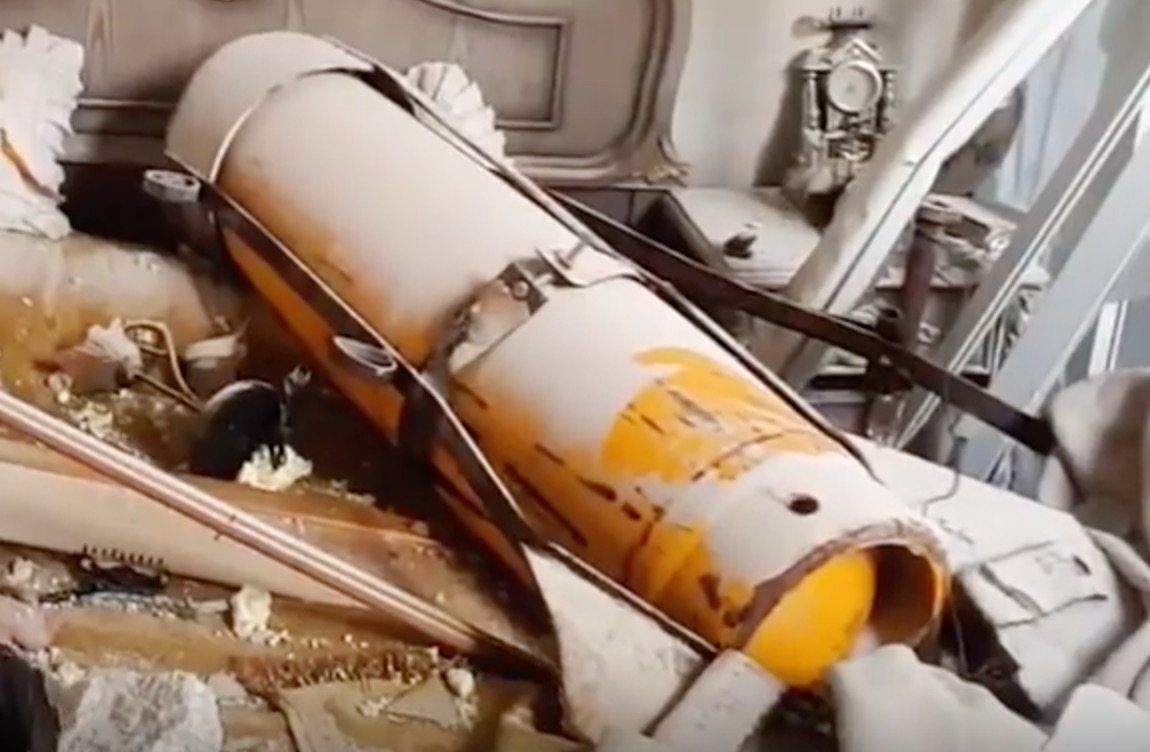 Identical yellow chlorine cylinders, some with matching external structures as those seen with the Douma munitions, have been repeatedly documented at the sites of previous aerial chlorine attacks, and the OPCW FFM report on the February 4 2018 chemical Saraqib attack includes detailed photographs that confirm the same type of munitions were used in both the Saraqib attack and Douma attack.

Recent OPCW FFM reports have included detailed photographs of munition debris, and have proven extremely valuable for matching debris to munitions used in previous attacks. What is yet to be explained is how Sarin was used in the February 4 2018 Saraqib attack, as it is unlikely that Sarin was added to the chlorine gas cylinder, suggesting a yet undocumented munition or container attached to the chlorine cylinder was used. If signs of Sarin use are detected in the Douma attack, hopefully the OPCW FFM will be able to show the how Sarin was deployed.