Over the last year, the OPCW has faced a series of leaks related to the Fact Finding Mission’s (FFM) investigation into the Douma chemical attack. The OPCW have now released their investigation into these leaks. These leaks appear to have originated from two former employees: Inspector A, who is Ian Henderson and Inspector B, a.k.a “Alex”, who is almost certainly Brendan Whelan.

In previous parts of this series we looked at the claims associated with Whelan and Henderson, and consulted chemists, toxicologist and chemical weapons experts. It became clear that Henderson and Whelan’s claims were flawed, overstated and at times actively misleading.

We also assessed what would be required for a “false flag” attack to have taken place in order to result in the the huge amount of evidence found related to this incident. Once available information is taken into account, it is clear that faking the Douma chemical attack would have been effectively impossible.

In short, the OPCW’s investigation agrees with the key points that we identified using openly available information. These two employees not only had limited access to information related to the Douma investigation, but also actively misled people on issues, including their status and the work they were authorised to conduct.

Ian Henderson a.k.a Inspector A

The OPCW report makes it clear that Henderson was not a member of the FFM. He aided the FFM by collecting data at sites of interest, including processing the cylinders from the two locations. He was later assigned to conduct an inventory of information and assess what other information would be required for future studies. The OPCW investigation states he had no further official part in the FFM investigation. It is important to note that this means Henderson would not have had access to large amounts of information regarding the Douma attack, including further investigations conducted by the FFM.

Henderson’s status was already possible to establish using both OPCW statements and internal documents leaked by WikiLeaks, specifically an email from Sebastien Braha, the Chief of Cabinet to the Director General of the OPCW. In this email Braha finds out that Henderson had produced an “engineering assessment” and asks why someone who was not a member of the FFM was carrying out this work. 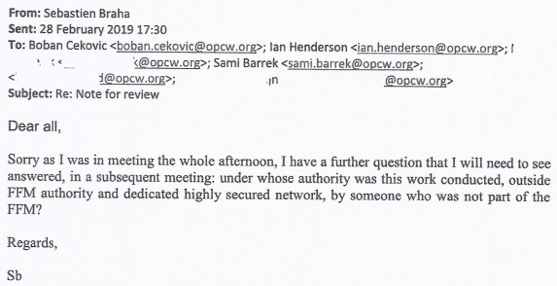 It is ironic that this email chain was leaked in an attempt to support the narrative of Whelan and Henderson, but resulted in a clear demonstration that Henderson was not regarded as being part of the FFM by the OPCW.

Despite not actually being part of the FFM, and despite being told specifically not to do so, Henderson decided to conduct his “engineering assessment” anyway. This not only involved misleading senior members of the OPCW, but also lying to the university which carried out his simulation. Henderson told this university they were being officially engaged by the OPCW. They were not. Indeed the OPCW even claims Henderson was on leave when this simulation was carried out.

During this period, Henderson also improperly handled extremely sensitive classified information. As well as disclosing this information to external organisations without proper authorisation, he also requested that they email him using his personal Gmail address. Considering the sensitivity of this kind of information, Henderson’s actions in handling it appear to be extraordinarily reckless.

In short, the OPCW report confirms the key points of our reporting on Henderson: his “engineering assessment” was an unauthorised report carried out with incomplete information by a person who consistently misled in order to achieve what they personally wanted. Henderson himself acted in a cavalier attitude with incredibly sensitive information and deceived those around him, both inside the OPCW and at external organisations, to achieve his own goals.

Brendan Whelan a.k.a Inspector B

We have previously examined Whelan’s claims in detail. In short, they are flawed, hugely overstated and, at times, actively misleading. As with Henderson, the conclusions of the OPCW investigation on Whelan are very similar to ours.

This is an absolutely vital piece of information that was not mentioned by any previous coverage of Whelan’s claims. By excluding this detail, organisations such as WikiLeaks, the Mail on Sunday and CounterPunch have potentially misled their readers about Whelan’s capacity to dispute the findings of the FFM.

The OPCW investigation also claims that Whelan confirmed in writing that he was satisfied with the Interim report that was eventually published. Although the OPCW does not provide any direct evidence of this, it is not entirely surprising. The only firm conclusion the published Interim report made about the Douma attack was that nerve agents were not used. As with all versions of the Interim report, it noted that further investigations were required.

The OPCW’s conclusions about Henderson also reflect on Whelan too. Whelan clearly made misleading statements about Henderson’s status, possibly in an attempt to lend more weight to Henderson’s analysis. It seems possible that Whelan’s email of the 20th May 2019, which criticises the OPCW for kicking out Henderson and insists he was a member of the FFM, was written with the intention of leaking it later in support of Whelan’s own claims. As we now know, those claims were false.

Even using open sources, it was possible to demonstrate that the claims of a conspiracy at the OPCW were misleading. We have previously covered this with a series of articles looking at the claims made by Henderson and Whelan, consulting with chemists, chemical weapons experts and toxicologists.

The OPCW investigation supports these conclusions: Whelan and Henderson made claims unsupported by evidence, misled their colleagues and lied to external organisations, mishandled sensitive classified information and made misleading claims about the attack in Douma.

It is fitting that the last word on this subject should go to Mr Fernando Arias, the Director-General of the OPCW:

“Inspectors A and B are not whistle-blowers. They are individuals who could not accept that their views were not backed by evidence. When their views could not gain traction, they took matters into their own hands and breached their obligations to the Organisation. Their behaviour is even more egregious as they had manifestly incomplete information about the Douma investigation. Therefore, as could be expected, their conclusions are erroneous, uninformed, and wrong.”

The OPCW Douma Leaks Part 2: We Need To Talk About Henderson