Islamic State has now taken over the Iraqi military outpost on the outskirts of Hit, a former forward operating base (FOB) which previously housed the US military in Anbar province.

Despite US-led airstrikes, Iraqi forces have found it difficult defending against Islamic State advances and recently abandoned one of the few remaining government outposts in Iraq’s largest province. In an embarrassing setback, an Iraqi military spokesman has called the action a “tactical retreat.” Worse yet, the US has spent more than $20 billion training the Iraqi military, according to the Congressional Research Service. 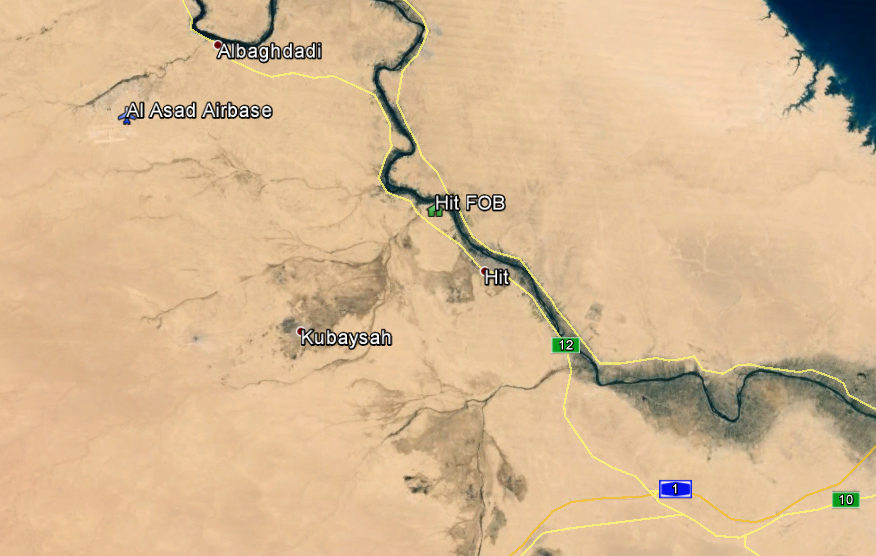 The FOB, located approximately four miles to the northwest of Hit, is also less than 20 miles southeast of the al Asad airbase, the Iraqi Army’s 7th Division Headquarters. Perhaps more importantly, the FOB sits along Highway 12 which connects nearby to Freeway 1, a short jaunt 20 miles to the south. Freeway 1, Iraq’s longest running road, connects to Syria and Jordan in the west via the Al Walid and Tarbil border crossings, both previously under Islamic State control. [1] Running east, it links to Ramadi, the province’s capital which appears to be the next target on Islamic State’s list. The militant group took Camp Saqlawiyah in late September, possibly in preparation.

However, US Special Forces and advisors are already on the ground in Ramadi which may suggest Islamic State will be met with increasing amounts of resistance. In fact, recent reports suggest that Iraqi forces, probably with the help of US advisors, successfully cleared parts of western Ramadi in mid-September. Ramadi has become by all accounts more important as Islamic State attacks closer to Baghdad and seeks resupply and/or reinforcements.

As we heard last month from Ahmed Abu Risha, a prominent tribal sheik who commands pro-government fighters, “If Ramadi falls, all of Anbar falls. Ramadi is the head. If you cut the head, the rest of the body will die, too.” His words echoed loudly earlier this month when Anbar’s top police commander, General Ahmad Sadak al Dulaymi was killed in an IED attack.

In the meantime, the fighting in Anbar province has sent at least 180,000 people from their homes, according to a statement from the UN’s Office for the Coordination of Humanitarian Affairs. The rise of internally displaced persons goes hand-in-hand with the Islamic State offensive as well as increasing US airstrikes in the desert province.

Militants took the town of Hit on Oct. 2 and nearby Kubaisa (Kubaysah) on Oct. 4. Attacks on the 7th Division Headquarters at al-Asad have also been reported—though the airbase still remains under Iraqi control, at least for now. Satellite imagery from 2013 shows the airbase with at least four helicopters for air support. However, with the way Islamic State has been taking them out, they may provide little help.

According to Iraqi officials, Islamic State controls 80% of Anbar province.

[1] Both crossings were at one point reported to be under Islamic State control. The Iraqi Army claimed to have retaken the crossings on 22JUN14.