This report contains extremely graphic imagery, including injuries and fatalities.

Multiple protesters in Iraq have been killed after being struck by 40mm “less lethal” rounds.

Over the last few weeks, Iraq has experienced significant unrest after protesters took to the streets, protesting the lack of jobs, poor public services and widespread corruption. Scores of protesters have been killed after bloody crackdowns in which live rounds have been used extensively against protesters. Some of the footage filmed by these protesters appear to show unarmed protest participants being targeted.

However, protesters have not only been killed by the extensive use of live rounds, but also by the deployment of “less-lethal” weapons, in this case 40mm tear-gas rounds. Although the intended effect of these tear-gas grenades is to dispense an irritating agent, mostly CS, they have also been fired directly at protesters, resulting in horrific injuries and often death. In short, these “less lethal” rounds have become a way for the security forces to apply lethal force without having to resort to live rounds.

Images and videos filmed by protesters have shown multiple cases where protesters have been hit by 40mm “less lethal” rounds. Due to the kinetic energy these round possess, they can penetrate flesh and bone with relative ease. While this may result in severe and potentially life-threatening injuries if impact is made on the body, if one of these rounds hits a person’s head, the risk of death appears to be particularly high.

The video below shows a person who appears to have been hit by one of these munitions.

The damage caused by these munitions is clearly evident in videos from the protests, however the full scale of the carnage is more clearly visible in what appear to be images of CT scans of those hit by 40mm grenades.

Images of what appear to be CT scans of those injured by 40mm grenades. Note the dates, highlighted in red, and the name of the hospital below: the Neurosurgical Hospital, Baghdad. Source 1 and source 2.

These munitions appear to have been used extensively against protesters, especially when security services are not using live rounds. The National reported that eight protesters were killed in this way on one day when protests resumed on 25 October, 2019 after a short break. Amnesty International conducted its own in depth investigation and identified multiple munitions types, as well as confirming that many of the videos and images showing this event originate from around Tahrir Square.  Images such as the one below help to illustrate how many of these munitions have been used against protests. 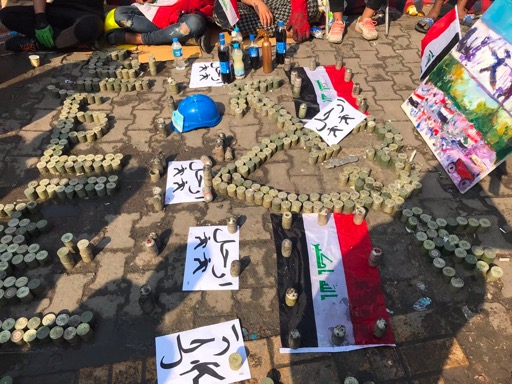 Multiple kinds of “less lethal’ 40mm grenades appear to have been used, including CS (better known as tear gas), smoke, and sound and flash. Several examples are listed below, including those manufactured by  Sloboda Čačak, a Serbian firm, and what Amnesty International and Adam Rawnsley identified as M651 tear gas and M713 smoke grenades manufactured by the Defense Industries Organization (DIO) of Iran. 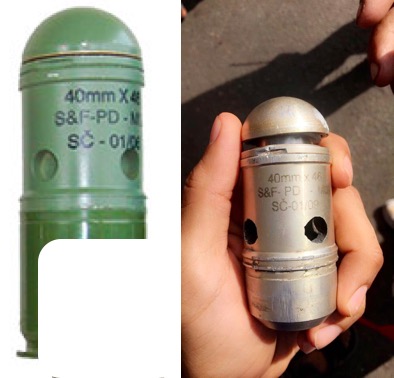 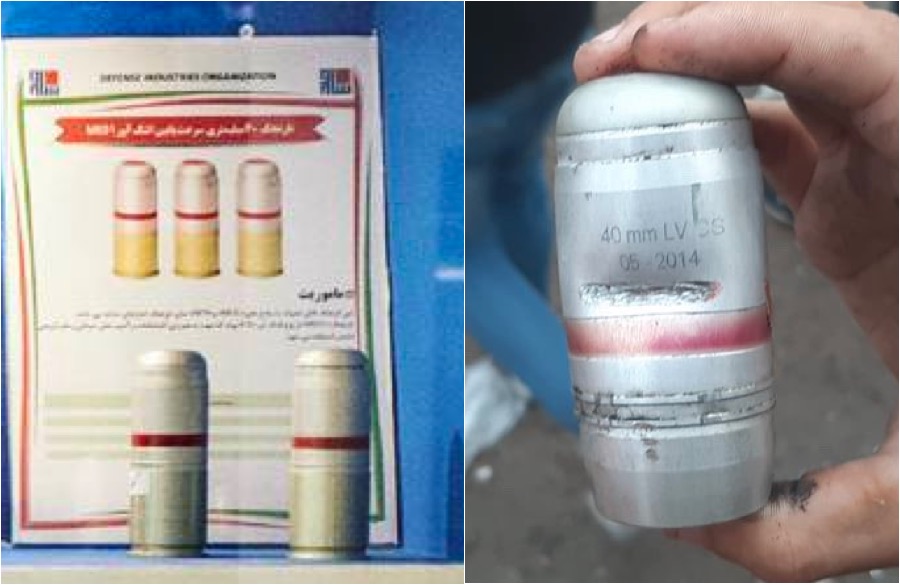 Example of 40mm CS grenade that Amnesty International and Adam Rawnsley have identified as being grenades manufactured by the Defense Industries Organization (DIO) of Iran.

As Amnesty International has noted, the 40mm grenades being used in Iraq are far heavier than the 37mm grenades used by many other security forces, and have clearly resulted in serious injuries and fatalities. Considering the scale of use of these 40mm “less lethal” grenades by the Iraqi security services, it is unsurprising that so many protesters have been killed or seriously wounded by the munitions described.

The use of “less lethal” 40mm CS munitions have previously caused controversy — for example their use by the Isreali Defence Force. In that case, munitions were fired directly at protesters, resulting in several deaths and injuries, including the fatal shooting of Bassem Abu Rahmeh. Since this criticism, the IDF appears to have enforced restrictions on the use of this kind of munition, resulting in a reduction of serious injuries.  It remains to be seen whether Iraq will restrict the use of these “less lethal” munitions, or continue using them in a manner that kills and wounds many protest participants.