Chemicals in Use in Iraqi Disturbances - Is it Nerve Agent?

Starting approximately from 29 October 2019, some reports allege that “nerve agents” were being used. These claims were backed up by various anecdotal reports and some video footage. However, is this really the case? Or is the term “nerve agent” being used incorrectly to describe signs and symptoms?

Reports from the field

Here are three examples of reporting from Iraq, alleging “nerve agent”. Others can be found with basic Twitter searches for the search terms “nerve agent iraq” for tweets after 29 October 2019. The general narrative is that normal CS “tear gas” was in prolific use until approx 29 October 2019. From that point on, a different substance with a different smell and, allegedly, stronger effects has been sporadically employed.

This report describes some of the alleged activity. 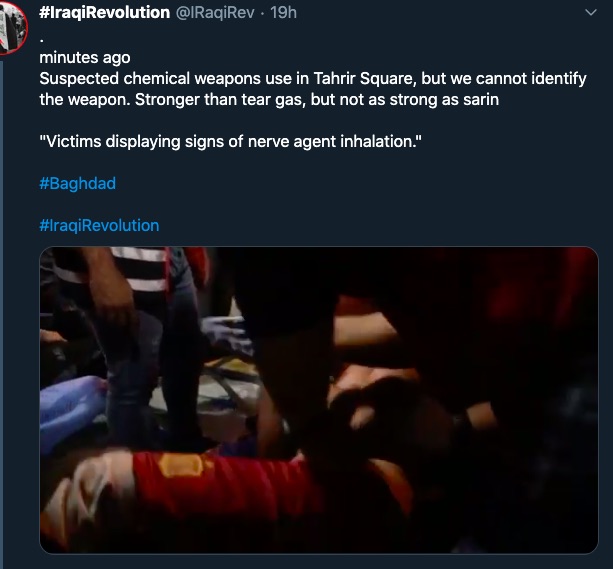 This tweet shows what appears to be a different victim.

These are photographs showing grenades that are associated with these incidents. Photo 1 (courtesy of @CalibreObscura) clearly shows a Serbian manufactured “flash-bang” grenade. It makes a very loud noise and bright flash, but is not a chemical dispersal device. 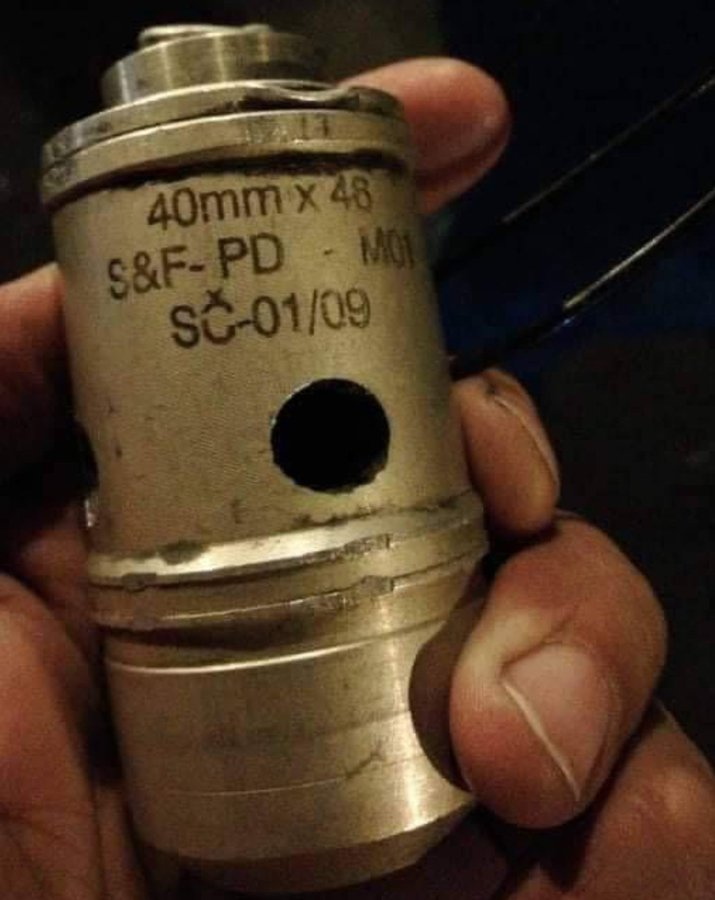 Photo 3, which comes to me via @IRaqiRev, is more mysterious. Any assistance on identifying this cylinder will be helpful. 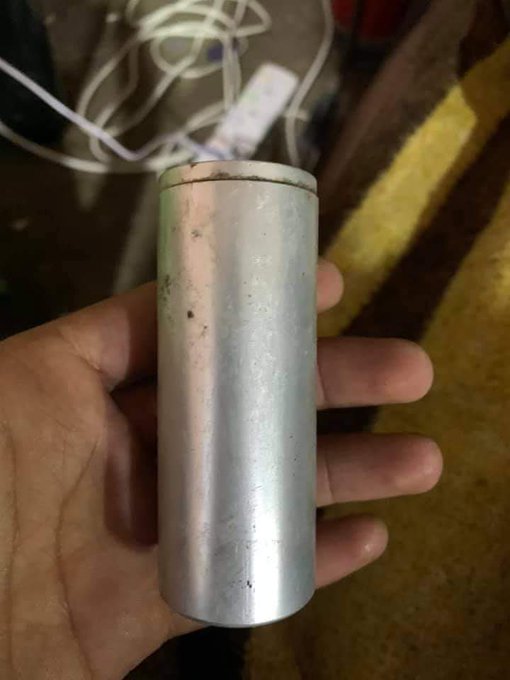 Some of the munitions used are clearly military-style smoke grenades.  These are often called HC Smoke Grenades because of the hexachlorethane (HC) used in them.  These grenades produce dense white or coloured zinc chloride smoke. An example is shown here: 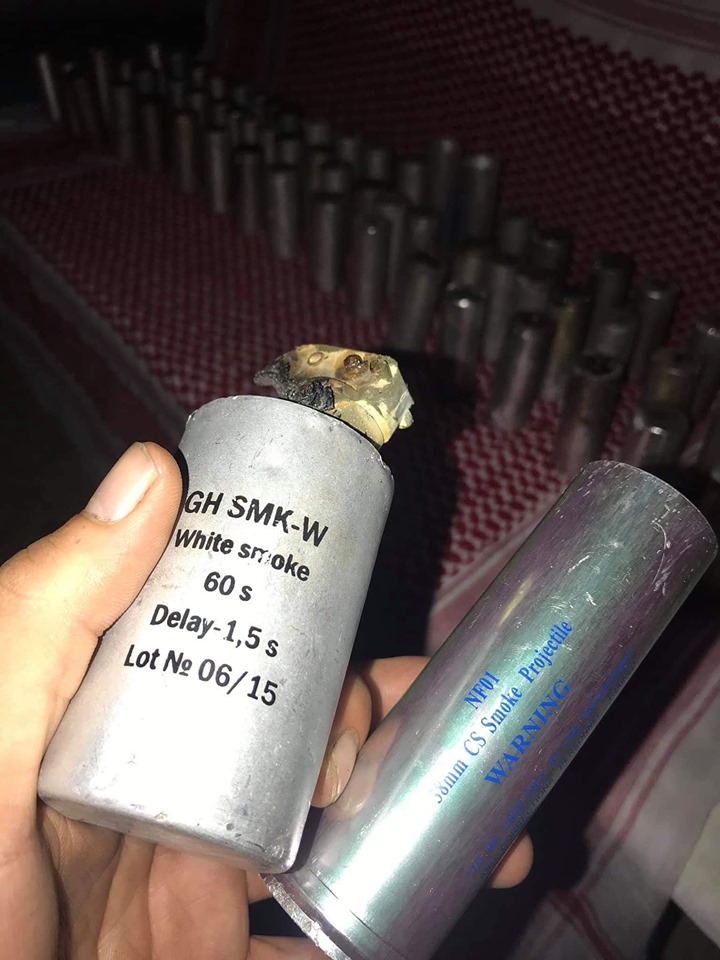 Two anecdotal reports that I have received was that victims were unresponsive to atropine, a medicine. I cannot independently confirm this at the time of posting.

Difficulties with diagnosis by video

It is actually very difficult to make any kind of diagnosis or chemical agent identification based on video. Even so, people still send Bellingcat videos and ask “what chemical did this?” and it is difficult, indeed nearly impossible to provide accurate identification, unlike the way Bellingcat operates with geolocation or munition identification questions. Many of the clinical signs that are observable in audio or video form, while gruesome, are terribly non-specific. For example, literally thousands of industrial and commercial chemicals cause respiratory irritation, skin and eye irritation, and difficulty breathing. Many signs of chemical warfare agent are subjective symptoms, such as memory loss and headache, and these cannot be easily observed by video.

In order to provide a better idea of whether an incident is a nerve agent, conventional tear gas, or something else, I have developed a simple worksheet of questions which can be asked, of victims, witnesses, and medical providers, both in the field and in clinical settings. The worksheet is available in PDF here and is shown here: 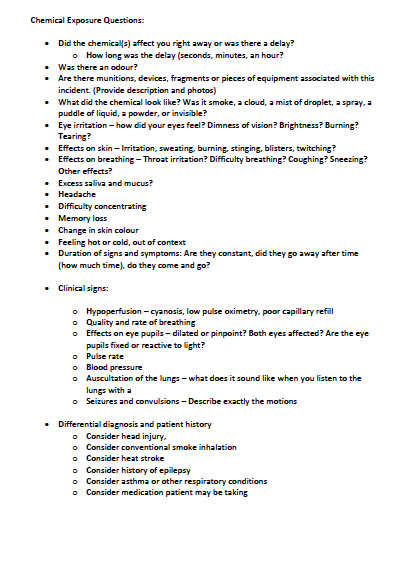 With the exception of two odd incidents in Syria in 2013, there is basically no history of nerve agents being used in grenade-type devices. The incidents in Iraq appear to be visible smoke from burning-type munitions. This is not consistent with nerve agents, which are all liquids at normal temperatures. The vast majority of nerve agent weapons are exploding munitions, which use an explosive charge to disperse their contents. The large majority of such weapons, if they function as intended, tend not to leave intact or mostly intact spent munitions.

The signs (things you can observe) and symptoms (things the victim feels) of nerve agent exposure are wide and variable. They also vary in time of onset. Respiration provides rapid onset of signs and symptoms. Exposure through skin contact takes much longer. Rather than repeat previous work, readers are strongly urged to review my older Bellingcat Post “Anatomy of a Sarin Bomb Explosion part II” here as none of the fundamental details have changed.

At the time of writing, none of the information I have received from Iraq points towards exposure to nerve agents, both for munitions reasons (i.e. the demonstrated munitions are not generally consistent with how you would disperse nerve agents) and medical reasons. In other words based on the available information none of the victims appear to have a set of signs and symptoms fully consistent with nerve agent exposure.

It should be noted that “tear gases” such as CS and CN are most definitely NOT nerve agents. Nerve agents interfere with the enzyme acetylcholinesterase. The tear gases do not operate using this specific mechanism.

Exposure to HC smoke may be responsible for some of the reported injuries.  HC smoke grenades are used around the world for smoke-screens and signalling. They are not designed or intended for crowd control use. However, the smoke is, like any other smoke, unpleasant and irritating to inhale.  HC could account for some of the new odours reported in recent days.   A lengthy discussion of the toxicity of HC smoke is here.  Paragraph 8-4 of this US manual talks about treating exposure to HC smoke.

Some excellent information is available in the US Army’s Field Management of Chemical Casualties Manual, a PDF edition of which is available here. A more thorough discussion of all medical aspects of chemical warfare and injuries from chemical agents is in this volume of the Textbook of Military Medicine available online here.

This post has been updated, and more updates will be posted if more information is made available.