Who to Trust, Google or the Russian MoD? A Guide to Verifying Google Earth Satellite Image Dates

Bellingcat recently published an in-depth investigation finding that the Russian Ministry of Defense (MoD) fabricated and misrepresented their satellite photographs in a July 21, 2014 press conference, immediately following the July 17 downing of MH17. The most obvious and compelling evidence of this investigation was in the clear differences in the landscape between Russian MoD satellite images–supposedly taken in mid-July–and the publicly available images taken in the week before and after the downing of MH17. While Bellingcat provided a guide for accessing this imagery in Google Earth, a question that has arisen is in the accuracy of these dates on Google Earth. As described in this guide, the findings of Bellingcat regarding the July 21 Russian MoD satellite images will be reaffirmed, along with a walk-through for anyone to verify Google Earth imagery via free and precisely dated image previews on Digital Globe.

The Russian MoD satellite images under consideration show a Ukrainian base with Buk anti-aircraft systems at the coordinates of 48.098403, 37.754424, just north of Donetsk. While the Russian MoD claims that these photos are from mid-July, a comparison with Google Earth satellite photos dated in May, early July, and late July show that this cannot be true.

These comparisons of the field and vegetation patterns to the immediate west and east of the Ukrainian base are damning, in that they clearly show that the Russian MoD satellite photos were taken in June, and not July. However, a question that has arisen is how to verify the exact dates of the Google Earth satellite photos. This verification can be done through checking the previews of imagery from Digital Globe, which supplies Google Earth imagery at a higher resolution for Google Satellite. This simple guide demonstrates how easily this imagery can be checked by anyone using Google Earth.

Much of the confusion over the correct date of satellite photos is from how Google Earth handles the dating of their satellite imagery, where “strips” of images are overlaid over different captured days. The patchwork nature of the variant dated imagery is not visible unless you specifically turn it on with Google Earth, where it appears as such: Each strip represents the most recent satellite image up to the date selected on Google Earth (in this case, it was April 26, 2015). We can determine the specific date of each strip by zooming in, which is the date determined in each Google Earth satellite snapshot in the Bellingcat report in the Russian MoD satellite photos. Instead of just relying on the Google Earth date, we can also check the publicly available image previews on Digital Earth to verify–without any doubt–the correct date of each satellite image.

From the Digital Globe’s ImageFinder page, we can input coordinates to find the historical satellite imagery for a site. After selecting “Enter Coordinates,” you can enter the coordinates of the base just north of Donetsk: 48.098403, 37.754424. I selected a 2 square-kilometer radius, but you can do any parameters you would like. 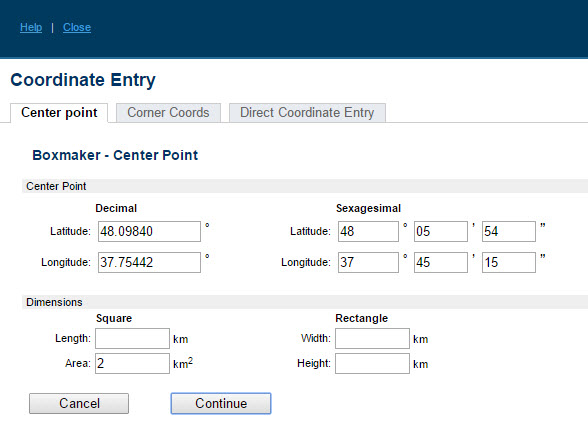 After clicking “Continue,” something like this will show up, displaying the area that is selected by the selected parameters. Click “Search” to display all available imagery. Be prepared to wait a while–it can sometimes take a bit for a window to pop up after clicking “Search.” A window will now pop up (check your ad blocking plug-ins and pop-up window settings!) showing all available imagery for the selected coordinates with your parameters. Click “Acquisition Date” (red box) to sort the available images by the date the images were taken. From that, we get the following list of images taken in the past year with varying angles, cloud cover, image band type, and so on. Select “View” for your desired satellite image to find the free preview available for the image, so that we can verify that the Google Satellite image is the same as the Digital Globe image, thus verifying the capture date. 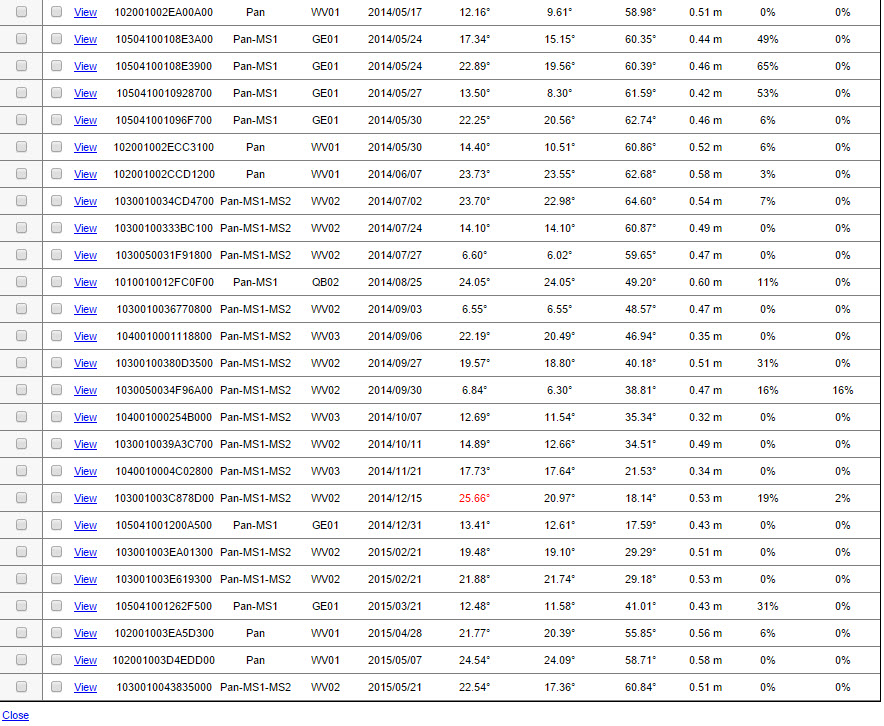 After clicking “View,” a window like this will come up, showing the satellite image along with its metadata. You want to re-size the image to “max available resolution,” and then save the image so that it is easier to examine the finer details. This particular image is for July 24, exactly a week after the shoot-down of MH17. 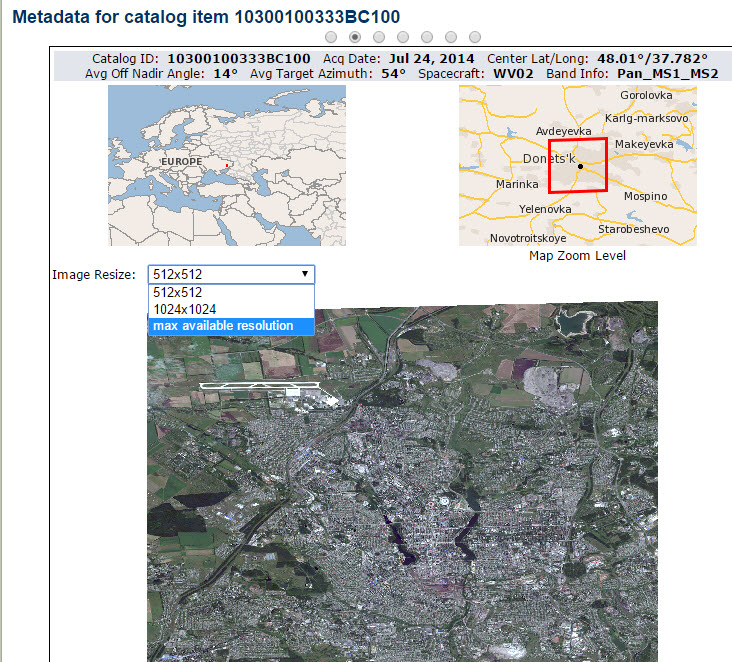 Be sure to save the image to examine it more closely. 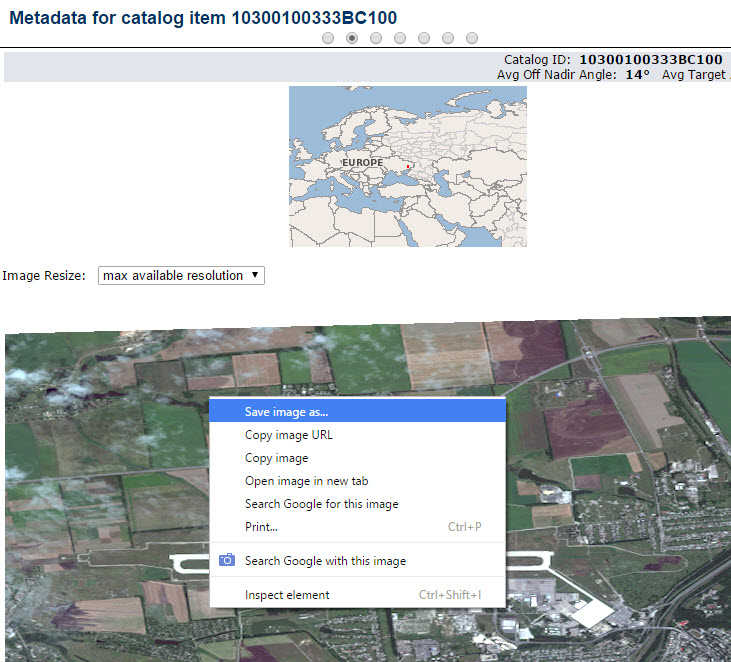 Now, we can finally conduct a close comparison of the Digital Globe image and Google Earth satellite image to make sure they are the same, thus verifying the date of the Google Satellite image. The previews of the Digital Globe imagery will be a much lower resolution and quality than the Google Satellite version, but the key features that have changed since May and June will be visible. Though you may need to squint your eyes a bit, it is undeniable that the Google Satellite images are these same as the Digital Globe images taken on the same day. Thus, we can put to rest any notions that the dates in the Bellingcat report in the Russian Ministry of Defense were incorrect or estimated.

Just to recap, take another look at red and yellow-boxed features of the vegetation and field in the the Russian Ministry of Defense’s satellite photo that was supposedly taken in mid-July, as compared with the (now double verified) dates of the Google Satellite images: There’s a Map for That How Tall is That Gantry?