It has become abundantly clear that geolocation and remote sensing is fundamental to knowing what happens in conflict areas where it is often too dangerous for journalists, observers and analysts to be present on the ground.

This is a satellite-based case study on vetting a three-dimensional view of an area via Google Earth, featuring examples from Syria, Yemen and Sudan.

The satellite imagery we use for conflict analysis, geolocation, or any other form of investigation is a flat image. Aside from city-based areas, there is limited three-dimensional views of buildings or features — all of which are crucial to monitoring and geolocating events. Google Earth does have three-dimensional mountains, but even they sometimes fail to represent what is on the ground.

However, it is possible to use varying angles of satellite imagery to get a three-dimensional understanding of an area.

A key feature of satellite imagery is the nadir. This is the view from above the Earth directly to its center. Having an angle “off nadir” provides a variation to the standard map view. Each time a satellite captures imagery the nadir varies in its angle of shot.

The images of my plant below illustrate this. The middle image is a replication of nadir angle 0 degrees. It’s a direct downward shot. The other two are varied angles, but given their presence, you have a working knowledge of the sides of the plant, as well as its top.

Now let’s use this information for a practical approach to geolocating serious incidents that occur during conflict.

There are three important ways you can use a varied nadir to your advantage, they are:

How can you access varying angles of the nadir? As explained above, each time satellite imagery is taken, the nadir will vary. If you have the Google Earth application, you are able to access past imagery.

For example, in this view of Sudan’s central area, each prior image we select using the “historical imagery” option shows an alternative angle of the buildings, exposing different sides, shadows, and small side streets. 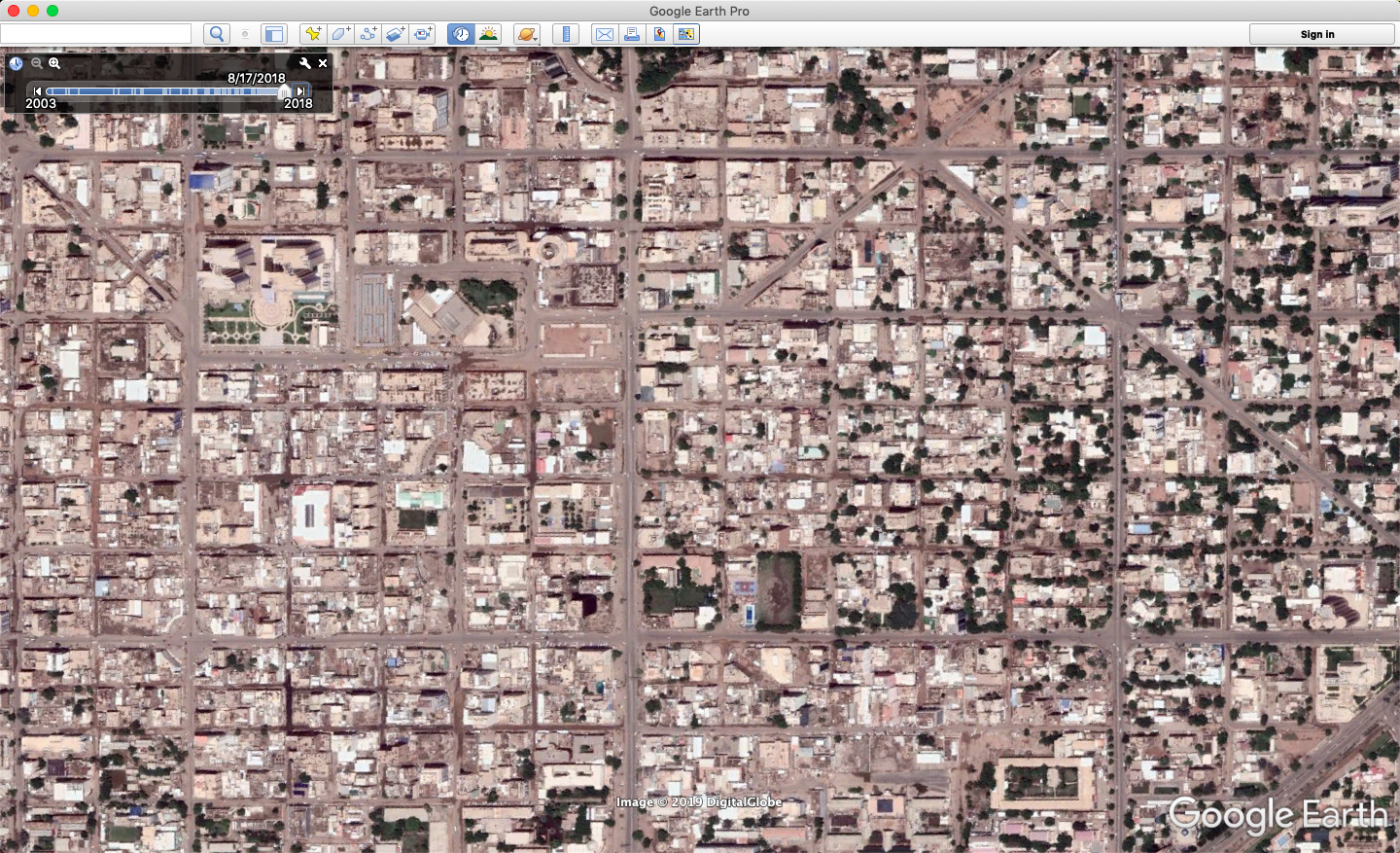 The following will include examples of what you can use to assist when viewing alternative angles of past imagery for geolocation and analysis purposes.

Identifying The Sides of A Building

Alternative nadir angles may expose the sides of buildings allowing analysts to get a more three-dimensional view of their design.

In the first example, we look at a prison of the National Intelligence and Security Service of Sudan in Khartoum. I previously spoke with detainees of the prison, who claimed they had been tortured at the facility. When they described what it looked like, they were only able to give details as to the sides of the building, and how many levels it had.

By viewing alternative angles of the building, we can match up those statements with varying views available through satellite imagery.

While that form of geolocation may be used to become familiar with how a building looks, this is also an effective practice for geolocating video footage.

In this video from Sudan, we are able to see a number of building sides. The specific scene below shows one view that can be used: 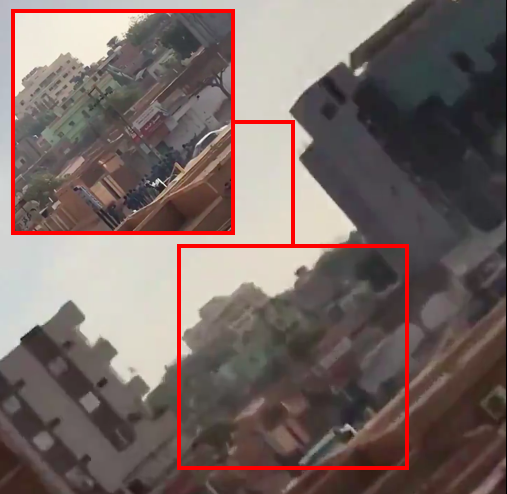 There are three buildings in the image that are at varying positions. The green center building and the glass building on the right have unique features. These features can be seen on angled views to see the north facing and side panels of the buildings.

Simply scrolling back in Google Earth’s satellite imagery will provide you with a clear angled view of the front of those buildings. On Google Maps, we would not be able to see this.

We can’t see the face of the green building because of the shadows it casts, but we can definitely see its color on the side, which is present in the video. IMPORTANT NOTE: When geolocating footage from buildings, be sure to carry out an assessment on whether or not the footage is filmed from a private dwelling. Publishing the geolocation of this may endanger the filmer should the content be sensitive.

Identifying The True Features Of Landforms

In Google Earth and Google Maps, we are able to access 3D views of mountains and land formations. However, some of those formations may not reflect exactly what is present on the ground.

For instance, some mountain ranges may have rocky outcrops. These formations will not be present on a 3D view, but viewing varying angles and shadows can show the true ridge or outline of a mountain by the shadows it casts.

In this video, two Houthi rebels inspect a crash site in Yemen geolocated for the purposes of a GermanArms workshop. 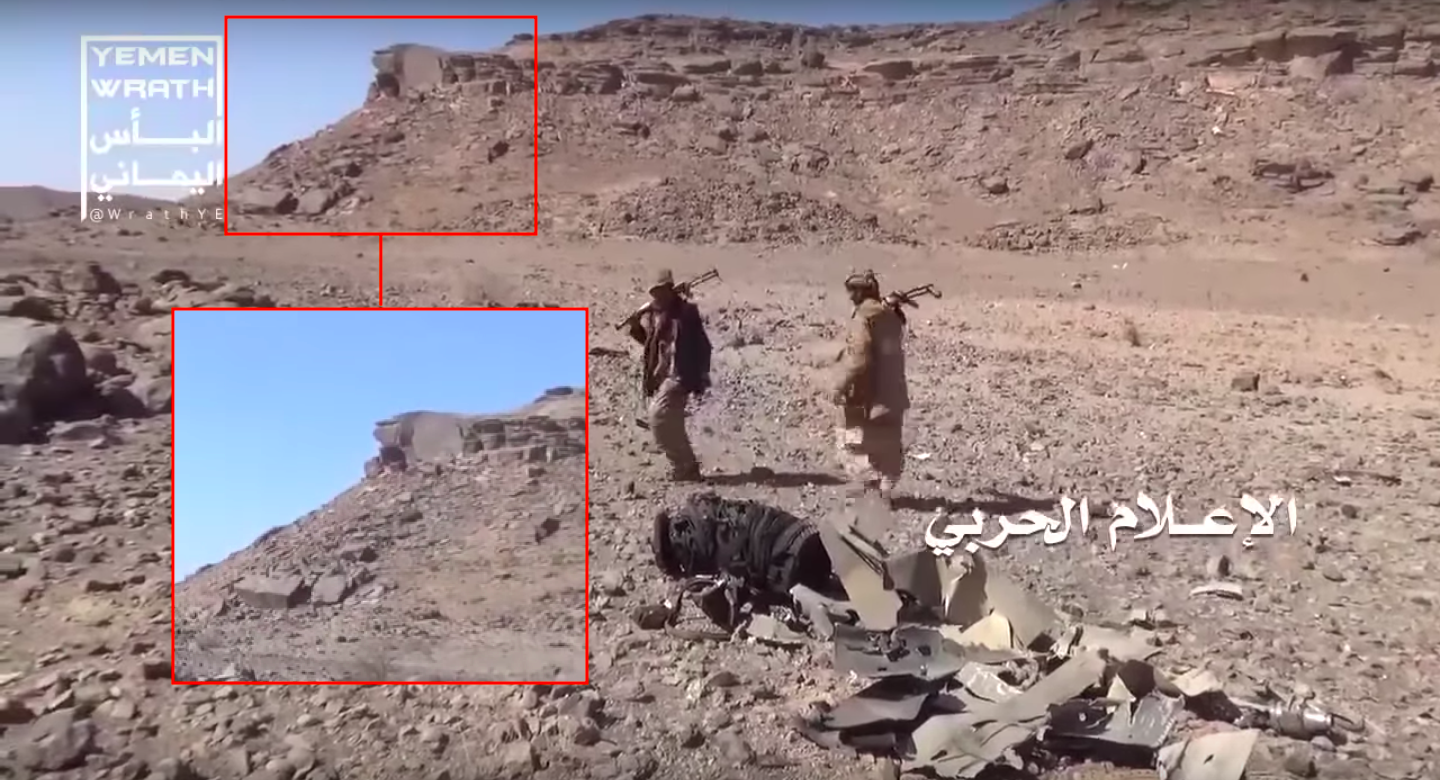 The rise in the background has a unique “layering” effect to the rocks as well as a large flat-faced shelf and a number of rectangular-shaped rocks below (as seen in the red box). Geolocating this can be quite difficult as the layering is not reflected on satellite imagery (below) either in its 3D view or flat view. However, when looking at an alternate angle from past imagery, further depth is shown in the rock face (as seen below). With this view, it gives us a more “on-the-ground” feel of what that mountain would look like, to see if it makes a match for what we can glimpse in the video. 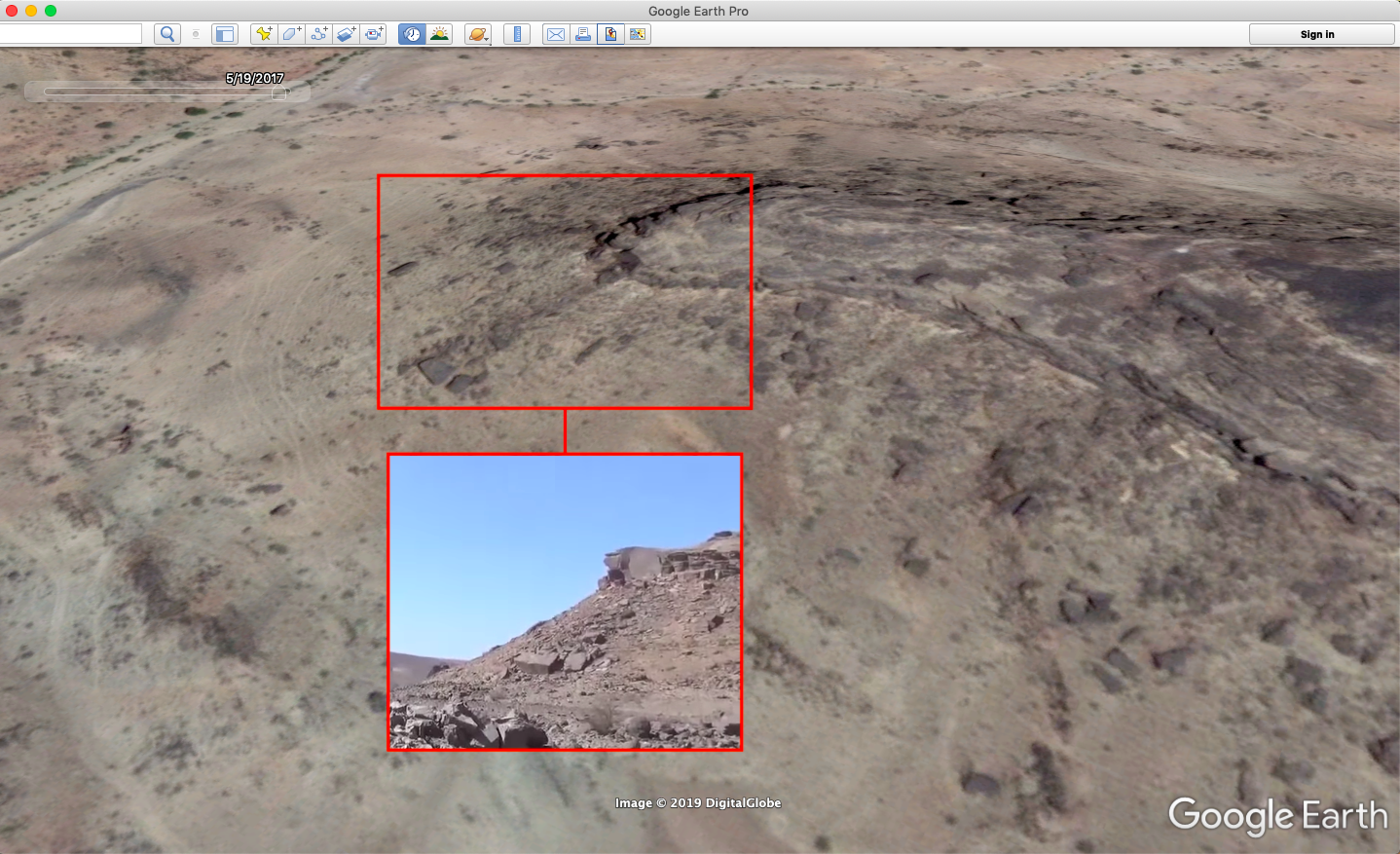 The corner pieces of the mountain show unique depth and shadows to confirm its position.

A similar example to show why angled imagery is important for mountain geolocation comes from Afrin, Syria.

In this footage from Afrin, shot through the cockpit of a T-129 helicopter, a cluster of buildings can be seen being attacked. The mountain ridge shows a unique rise of its rocky outcrop: The geolocation of the mountain, confirmed with the coordinates in the bottom right of the helicopters military grid reference view, appears on Google Earth with this ridgeline. The cluster of buildings destroyed are seen at a more direct nadir here. However, one must notice that both the outline of the three-dimensional view, and the “top-down” view does not replicate that sharp ridge we saw in the video. What we can see in the image above is a large rock-laden outcrop. Finding that on an image where the shadows are larger illustrates its height, as seen below. Note: this specific geolocation was a crowdsourced for the ItalianArms workshop conducted by Christiaan Triebert, Leone Hadavi, Timmi Allen and Thomas.

Identifying The Shadows Of Objects

Geolocation work can be made easy by identifying large man made objects in the rear of the scene under analysis. This might be, for example, a minaret, communications tower, or even power lines.

Finding those objects can often be a challenge, but can be made easier via using angled imagery or object shadows.

Something as distinct as a power line pole can be helpful in geolocation, though they are often hard to pick out. Using imagery where there is a high angled view in addition with an early or late in the day image can highlight these objects as their shadows will be longer.

For instance, in the satellite image below, it is very difficult to pick out the power lines. Shifting to a more alternative view on a different date yields much better results with the accentuated shadows of objects. In a practical example, geolocating a video of Sudan’s security forces firing into the air during a buildup of protests on December 28, 2018, was achieved by using the power lines as reference.

In the video below, a unique power line appears.

Notice the double pole (as seen in the image), while many of the surrounding power line poles were single poles. Having geolocated a number of other videos of security forces firing sporadically in the area, the concrentation point for geolocating this video was based around the Royal Care International Hospital (مُستشفى رويال كير العالمية) in Khartoum’s east.

The vehicles were driven along a road separated by black and yellow striped dividers:

Given that the main roads in the area used this style of road divider, the position of the double-legged powerline pole was crucial to the geolocation of this video. This was also matched with the other surrounding power line poles and trees to find a true position.

Changing imagery can reveal a very clear representation of the object we are looking for. In the image below, the three screenshots of the same poles are from Google Earth and different dates. The one in the middle shows the ideal representation of the powerlines. The image on the far right is also what is shown on Google Maps.

This method can also be useful as far as much larger objects are concerned. For instance, you may be looking for a communications tower or a minaret from a mosque in a specific area.

In the Google Earth image below we have both: Using a past image, we can view the shadows which will reveal these tall objects. 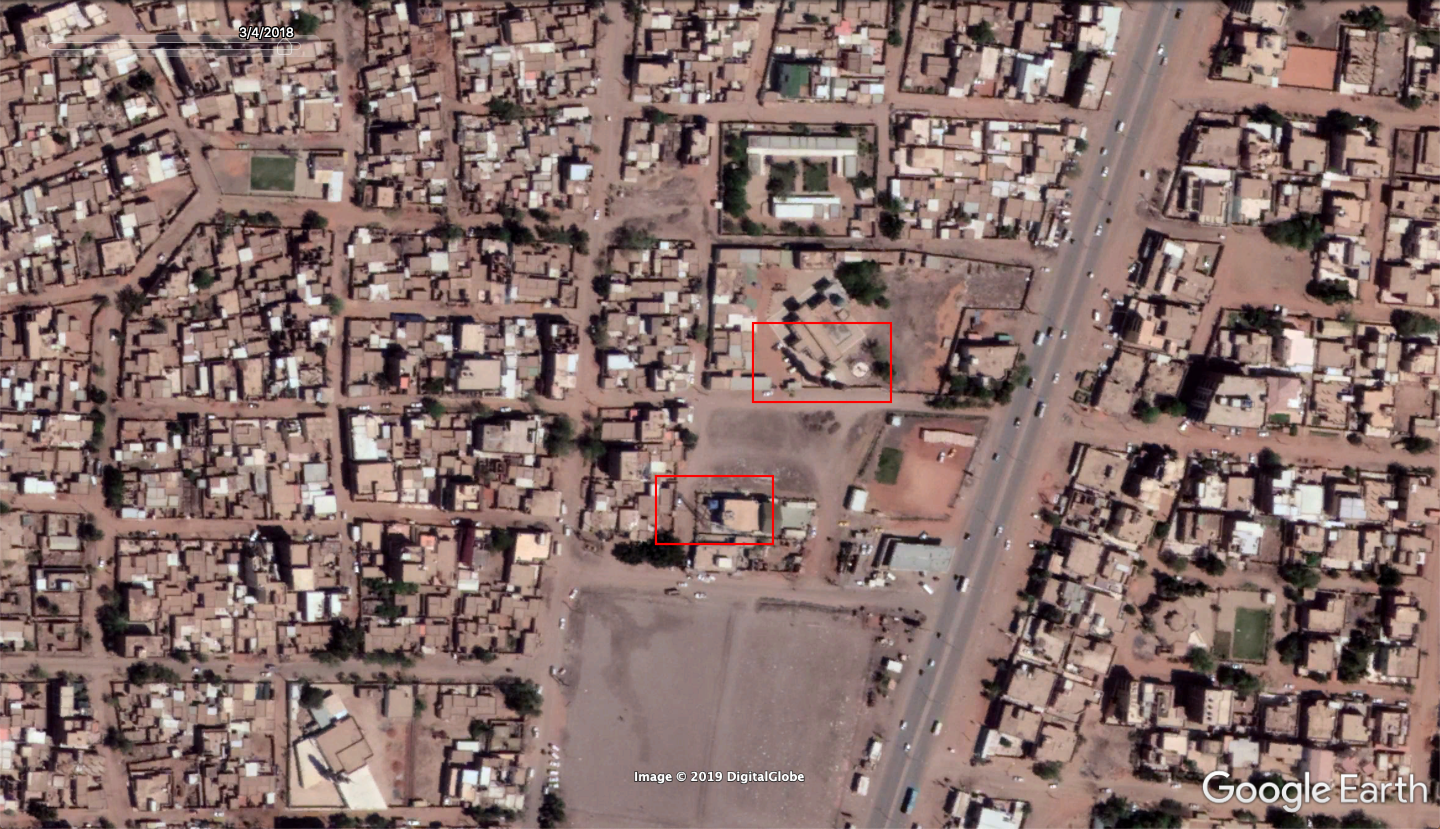 Viewing exactly what the minaret looks like from top to bottom, as well as the communications tower, can be done with Google Earth imagery taken on a large angle. Using Angles For A Practical Approach

In any open source investigation, it is much easier to find your goal with a lot of information than barely any at all. Google Earth’s past imagery is part of that information. It shows development, changes, seasons, new objects and, as discussed in this post, varying angles.

Viewing those varying angles of nadir is a practical skill that can help you in all kinds of ways — from the most simple of geolocation tasks to more complicated endeavors featuring remote monitoring and sensing.