Please read our full report on the life and times of Dr. Alexander Mishkin here.

In the preceding report from the current investigation into the two suspects in the Skripals poisoning case, Bellingcat and its reporting partner the Insider disclosed the identity of one of the two suspects. The person travelling under the alias of Ruslan Boshirov was identified as GRU’s Col. Anatoliy Chepiga, recipient of Russia’s highest state award.

Bellingcat can now report that it has conclusively identified the second suspect, who travelled to Salisbury under the alias Alexander Petrov. In its previous reporting, we already produced evidence that “Alexander Petrov” is not an authentic persona, but an undercover alias for an officer of a Russian security agency. In another report, we established that “Petrov” was specifically working for Russia’s military intelligence, the GRU.

We have now identified “Alexander Petrov” to be in fact Dr. Alexander Yevgenyevich Mishkin, a trained military doctor in the employ of the GRU. Bellingcat’s identification process included multiple open sources, testimony from people familiar with the person, as well as copies of personally identifying documents, including a scanned copy of his passport. The full identification process will be described in the upcoming full report.

While Alexander Mishkin’s true persona has an even sparser digital footprint than Anatoliy Chepiga’s, Bellingcat has been able to establish certain key facts from his background. 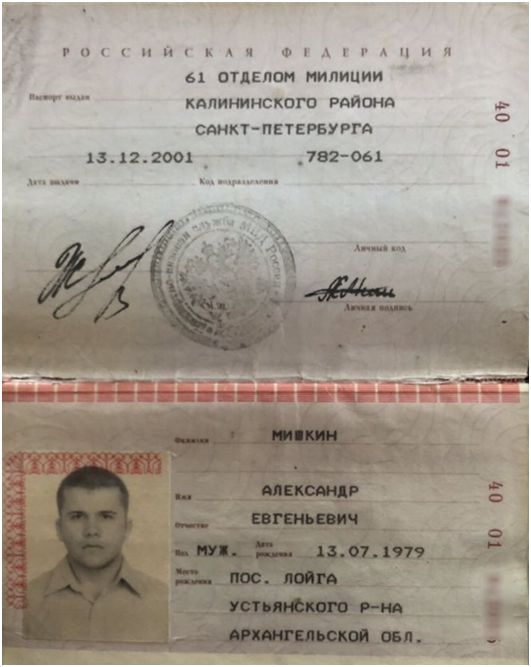 A scanned copy of Alexander Mishkin’s passport, issued in 2001 in St. Petersburg. The passport lists his real name and place of birth as Loyga.

Who is Alexander Mishkin?

Alexander Mishkin was born on 13.07.1979 in the village of Loyga, in the Archangelsk District in Northern European Russia.  He studied and graduated from one of Russia’s elite Military Medical Academies, and was trained as a military doctor for the Russian naval armed forces.

During his medical studies, Mishkin was recruited by the GRU, and by 2010 had relocated to Moscow, where he received his undercover identity – including a second national ID and travel passport – under the alias Alexander Petrov.

In the period 2011-2018, Alexander Mishkin traveled extensively under his new identity. Bellingcat has identified multiple trips to Ukraine and to the self-declared Transnistrian Republic, the last of which as late as during the Maidan events in Kyiv in December 2013.

Unlike the case of Anatoliy Chepiga, “Petrov”’s cover identity retained most of the biographical characteristics of the authentic Mishkin – such as the exact birth date, first and patronymic name, and first names of his parents.

Until early September 2014, Mishkin’s registered home address in Moscow was Khoroshevskoe Shosse 76B – the address of the headquarters of the GRU.  In the autumn of 2014, both Mishkin and Anatoliy Chepiga moved to upscale apartments.

Alexander Mishkin current military rank is unknown. However, based on the known rank as of graduation from the Military Medical Academy (Russian military doctors graduate with a rank of senior lieutenant), and the elapsed time (15 years), it can be posited that as the time of the Skripals’ poisoning incident he was either a Lt. Colonel or a full Colonel.

Bellingcat and the Insider have interviewed multiple sources familiar with Mishkin, both in St. Petersburg and in his native Loyga.

In the full report, which will be published on Tuesday at 13:00, we will publish the full method by which Mishkin was identified, as well as witness testimony from various sources. The full report will also contain forensic evidence of the visual (facial) match between  “Alexander Mishkin” and “Alexander Petrov”