The OPCW Fact Finding Mission’s new report on the April 7, 2018 Douma chemical attack provides more details about what occurred in Douma nearly a year ago — and also allows us to compare those details and their conclusions to open source evidence and statements made by various parties.

A few days after the attack, Bellingcat published an article, Open Source Survey of Alleged Chemical Attacks in Douma on 7th April 2018, examining the open source evidence surrounding the attack. This article focused on one location in particular, an apartment building which, according to Bellingcat’s analysis of the open source material, contained at least 34 bodies. A chlorine gas cylinder was found embedded in the floor of one of the building’s balconies, as seen below, indicating gas was expelled from the cylinder directly into the building:

While Bellingcat stated in its reporting that chlorine was highly likely to have been used in two attacks that occurred at 1930 local time, some reporting on the ground suggested otherwise. Reports from the documentation group the Syrian Network for Human Rights and the Violations Documentation Center referenced both the 1930 attacks, and an earlier suspected attack at 1600 near Sa’da bakery in Douma. In addition to allegations of chlorine use, the VDC reported witness statements describing symptoms that suggested another chemical agent could have been used:

Syrian Civil Defence, also known as the White Helmets, reported that a chemical attack at 1945 on April 7, 2018 killed more than 43 people and injured over 500. They reported that the dead victims displayed signs of cyanosis (a bluish discolouration of the skin), excessive oral foaming and corneal burns. Six living casualties were reported to have pinpoint pupils and convulsions. The report concluded the casualties had been exposed to “toxic chemicals; most likely an organophosphate element.”

There’s no indication that these conclusions were based on anything but observations of the victims’ symptoms, and it’s possible the severity of the chlorine exposure was responsible for the unusually strong symptoms, as described by Keith B Ward for Bellingcat in The Lethality of Chlorine Gas – A Possible Explanation for High Casualties and Deaths Following the April 7, 2018 Attacks in Douma.

The OPCW Fact Finding Mission (FFM) seeks to establish whether or not the use of chemical weapons is likely to have occurred, not to establish who was responsible for attacks. Therefore, while the Douma report provides many additional details, it does not go beyond establishing that an attack had occurred. In the summary of the report it states:

Regarding the alleged use of toxic chemicals as a weapon on 7 April 2018 in Douma, the Syrian Arab Republic, the evaluation and analysis of all the information gathered by the FFM—witnesses’ testimonies, environmental and biomedical samples analysis results, toxicological and ballistic analyses from experts, additional digital information from witnesses—provide reasonable grounds that the use of a toxic chemical as a weapon took place. This toxic chemical contained reactive chlorine. The toxic chemical was likely molecular chlorine.

What’s of particular interest in relation to the open source investigations is the documentation and analysis of the impact sites by the OPCW FFM, where much of the open source video and photographic materials were recorded. The report identifies four locations of interest, two of which are the balcony and bedroom impact sites.

Location 2 is identified as the balcony site, with the location described in the report matching that of the geolocated open source images of that site. The OPCW FFM report includes a diagram of the building, indicating where bodies were recorded by locals in the aftermath of the attack: 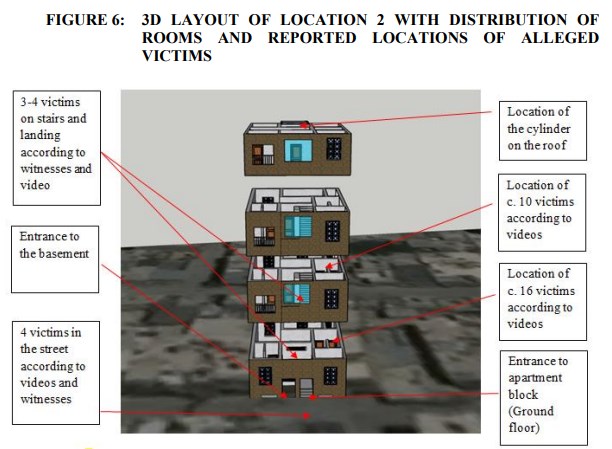 The OPCW FFM team were only able to visit the building after the bodies had been removed and buried, so were unable to examine the bodies themselves. The report states:

Many of the signs and symptoms reported by the medical personnel, witnesses and casualties (as well as those seen in multiple videos provided by witnesses), their rapid onset, and the large number of those reportedly affected, indicate exposure to an inhalational irritant or toxic substance. However, based on the information reviewed and with the absence of bio-medical samples from the dead bodies or any autopsy records, it is not currently possible to precisely link the cause of the signs and symptoms to a specific chemical.

While the OPCW FFM report does not provide its own casualty figures, it does include statements from witnesses regarding the number of dead:

Witnesses reported to the FFM team that there were 43 decedents in relation to the alleged chemical incident, most of whom were seen in videos and photos strewn on the floor of multiple levels of an apartment building and in front of the same building. Additionally, several witnesses reported seeing decedents in the basement of the building, on multiple floors of the building, on the streets and inside the basements of several buildings within the same area.

The initial Bellingcat investigation into the incident counted at least 34 bodies in videos and photographs from the balcony site. As there was no footage of the basement of the building it was not possible to count any victims (if any) that were killed in the basement.

The OPCW FFM analysis of the balcony site provides additional confirmation that the munitions used were air dropped. The OPCW FFM was able to access the site, and took multiple photographs of the gas cylinder and surrounding area: The report notes the following:

The mangled ironwork present on the patio indicated that there would have been a metallic frame and mesh covering it at one stage, though it was not clear whether this would have been present at the time of the alleged incident or had been demolished prior to that. The visual damage on the body of the cylinder indicates that the lateral aspect of the cylinder did not slide on the mesh but it hit perpendicularly.

This statement is consistent with the work of Forensic Architecture and The New York Times, which had previously noticed the damage on the cylinder caused by striking the mesh: 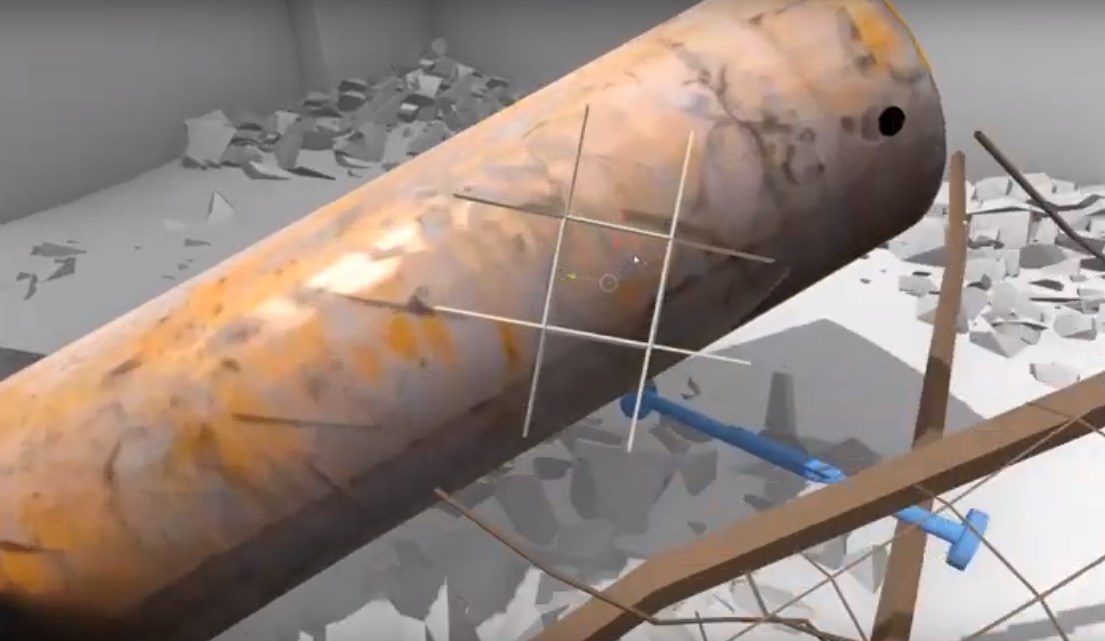 In addition to the cylinder striking the mesh as it fell, the OPCW FFM presented evidence it struck another object:

Observing the damage on the roof above the crater, the experts were able to provide an explanation of the cylinder not penetrating completely through the aperture. It can be seen that there was a large impact on the roof and walls above the balcony. The impact would decrease the velocity of the falling cylinder and changed its trajectory while hitting the concrete floor of the balcony causing a hole in it, but without sufficient energy to fall through it.

The damage described above can be seen in images taken by the OPCW FFM during their visit to the site: 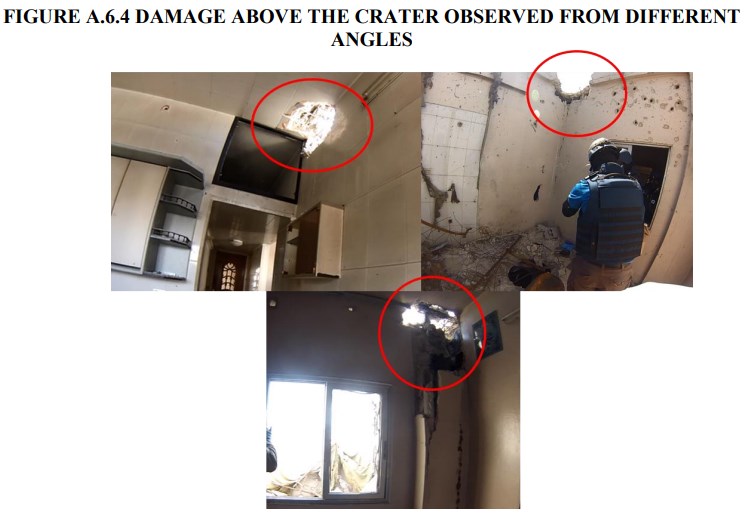 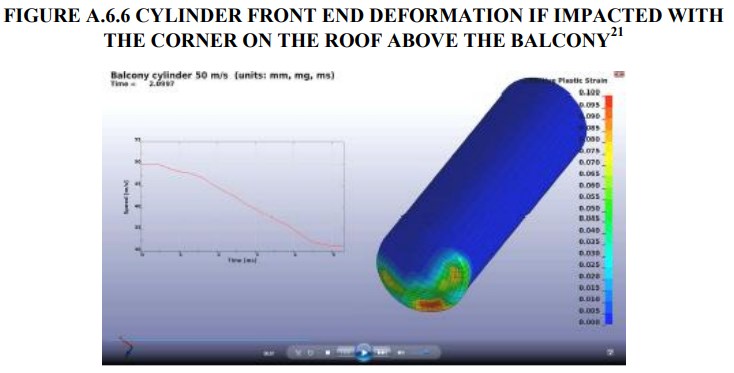 The OPCW FFM also documented changes in the locations they investigated from the footage filmed after the incident and what they found during their visits. In the case of the balcony site, they noted the cylinder had been previously sampled, objects and debris had been moved, and most significantly “the metal frame and fins, visible on the terrace in videos, were missing at the time of the FFM visit.”

The metal frame and fins are one of the key pieces of evidence connecting the cylinder found at the balcony site to the other gas cylinder at the bedroom site, and previous chlorine attacks in Syria. At the time of the FFM visit, the site was under the control of pro-government forces.

As with the balcony site, the impact and trajectory of the gas cylinder at the bedroom site was carefully examined by the OPCW FFM, with experts asked to assist with the analysis. The bedroom site has caused particular controversy, as the position of the cylinder on the bed, some distance from the hole in the roof it had apparently made, led some to claim the cylinder has been placed onto the bed manually by unknown actors. However, the OPCW FFM report stated the following:

The team consulted experts in mechanical engineering, ballistics and metallurgy to provide qualified, competent assessments of the cylinder trajectory. The results of these assessments indicated that the shape of the aperture produced in the modulation matched the shape and damage observed by the team. The assessments further indicated that, after passing through the ceiling and impacting the floor at lower speed, the cylinder continued altered trajectory, until reaching the position in which it was found.

The simulation of the impact also shows that the shape of the hole in the roof is consistent with the gas cylinder landing parallel with the ground, as demonstrated in the below image: 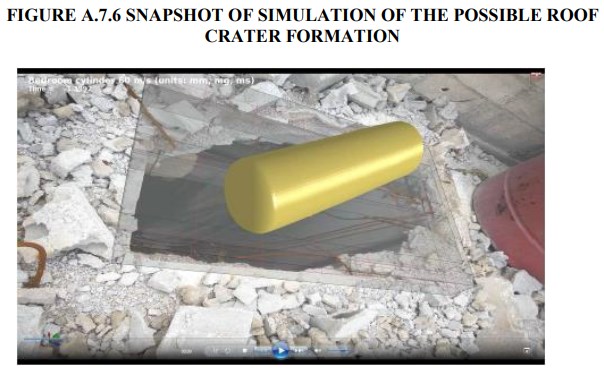 A computer model of the cylinder after impact was also created:

The flattening of one side of the cylinder can clearly be seen in photographs of the gas cylinder: This, again, clearly indicates that the chlorine gas cylinders used in the attack were dropped from the air, with modifications to those gas cylinders consistent with those seen on gas cylinders used in other chlorine attacks. If these scenes were faked, as some have claimed, then they would have to have faked them in such away that when experts examined the damaged gas cylinders from each site they were perfectly consistent with the types of impacts seen at each site. This includes a metal mesh pattern on one cylinder, along with damage consistent with it hitting the corner of the building, and the other cylinder landing in a very different way, parallel to the roof it struck, causing one side to flatten.

While some may find comfort in increasingly elaborate conspiracy theories about what happened in Douma, the OPCW FFM report continues to make it clear that the Douma attack was yet another chlorine attack delivered by helicopter, using the same type of modified gas cylinders as seen in previous chlorine attacks.