Last week, the Organisation for the Prohibition of Chemical Weapons (OPCW) released the first report of the Investigation and Identification Team (IIT). It examined three chemical attacks in the vicinity of al Lataminah: two using Sarin on March 24 and 30, 2017, and one using chlorine on March 25, 2017. The attack on March 25 struck a hospital at about 3 PM local time and killed a doctor, injuring 30 others. The IIT concluded that there are reasonable grounds to believe that these attacks were carried out by the Syrian government.

We know that a delegation of generals visited a command post in Hama and observed strikes on al Lataminah on the March 25, 2017, the same day of the chlorine attack on the hospital. This delegation included both General Ali Abdullah Ayoub and Brigadier Suheil al Hassan. The presence of Brigadier al-Hassan is of particular interest; he is the commander of the “Tiger Forces”, who have previously been linked with the use of helicopter-borne chlorine munitions.

This visit was reported both by SANA, a Syrian state news outlet, and the Syrian Ministry of Defence. Indeed, SANA produced a video of this visit, which was deleted later, after SANA purged its YouTube account. However, the Syrian Archive managed to collect a copy before the deletion.

Our assessment shows that the visiting generals were likely present at this command post observing strikes on al Lataminah, less than two hours before the chlorine attack on al Lataminah hospital:

There are two methods by which we can establish the time of this visit. The first is by analysing the shadows. In order to do this accurately we must know where the object casting the shadow is.

The clearest shadows in the SANA video are those cast by soldiers standing on parade for an inspection. By examining the features in the video, we can identify a road running east-west, an earth bank to the north side, a T-junction to the east, and a concrete structure on the north side of the road. Only one place in the vicinity of the command post fits these features, and that is a stretch of road at 35.205926, 36.771009. Note the earth bank to the north, the turn in the road to the east, and a concrete structure with a visible hole

Unfortunately, there are no clear reference points we can use to judge the fall of shadow. The best marker we have is the road, to which the shadows of the visitors appear to fall at an almost perpendicular angle. 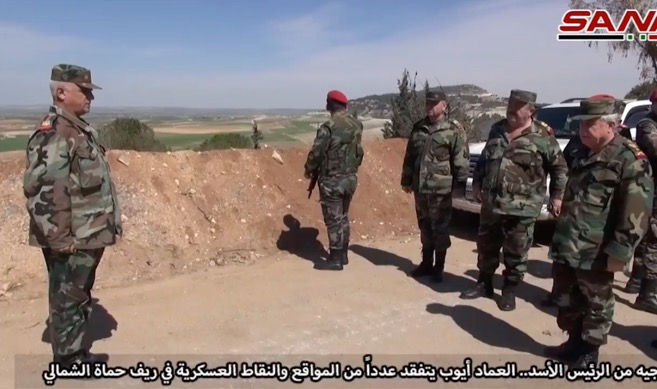 We can simulate these shadows using Suncalc, a tool used to calculate where shadows will fall on particular dates and times. By placing the shadow perpendicular to the road we get 1300 as a very rough time. Trial and error appear to indicate that this parade took place between 1200-1400.

For ease of analysis, the height of the virtual object casting the shadow on suncalc has been set at 100 meters. Since this does not affect the angle of the shadow, it has no impact on the time calculation, other than to make it easier to see the simulated shadow. A better shadow analysis may be conducted on what appears to be a live feed from an ISTAR platform, likely a drone, as spotted by MCantow. In this feed the shadows are clear, as are reference points such as buildings and roads. The feed displays the latitude and longitude of its target in the bottom left of the screen, so finding the location is easy. In the feed, the shadows appear to align almost perfectly with a side road, which we can use to establish the angle of the shadows. This clear reference point allows us to be much more accurate than the previous shadow analysis and gives us a time of about 1415. A change of fifteen minutes to that time changes the angle of the shadow so that it no longer appears consistent with the ISTAR feed.

Using Suncalc we can get a reasonably accurate assessment of what time certain parts of this visit took place. However, by looking at the watch faces of participants featured in the footage it may be possible to get a much more accurate assessment.

Although most of the watches we see in the video are too blurry to make out their faces, we do at one point see the watch of General Ayoub. His watch appears to show a time of about 1315. 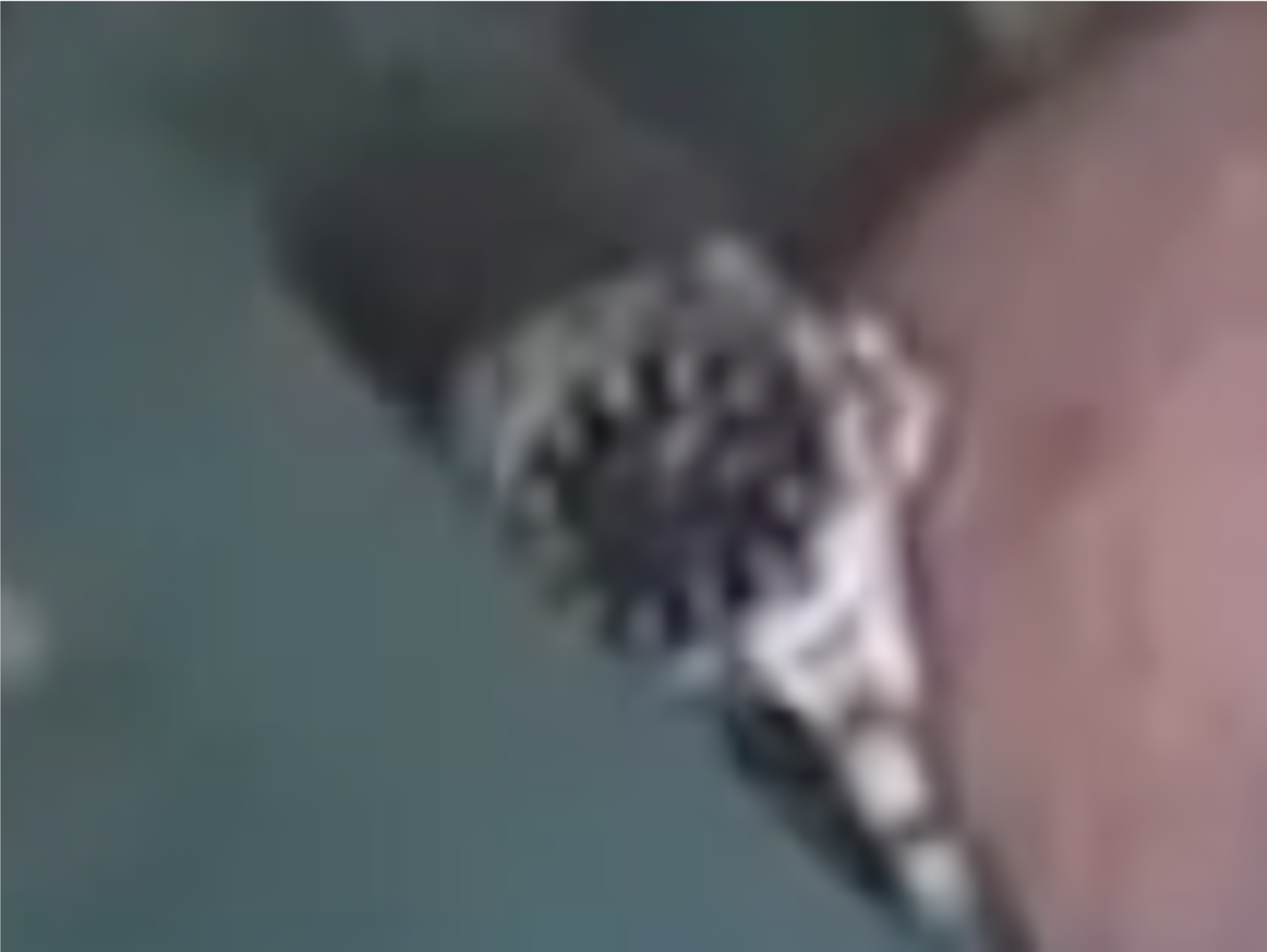 We decided to apply a sharpening tool from Topaz to see if we could get a clearer image. The output does appear to be clearer, although it should be noted that this is the interpretation of the sharpening tool. We placed the sharpened image next to a similar watch to help with the comparison. The watch does appear to show about 1315, which is consistent with the shadow analysis we carried out earlier. 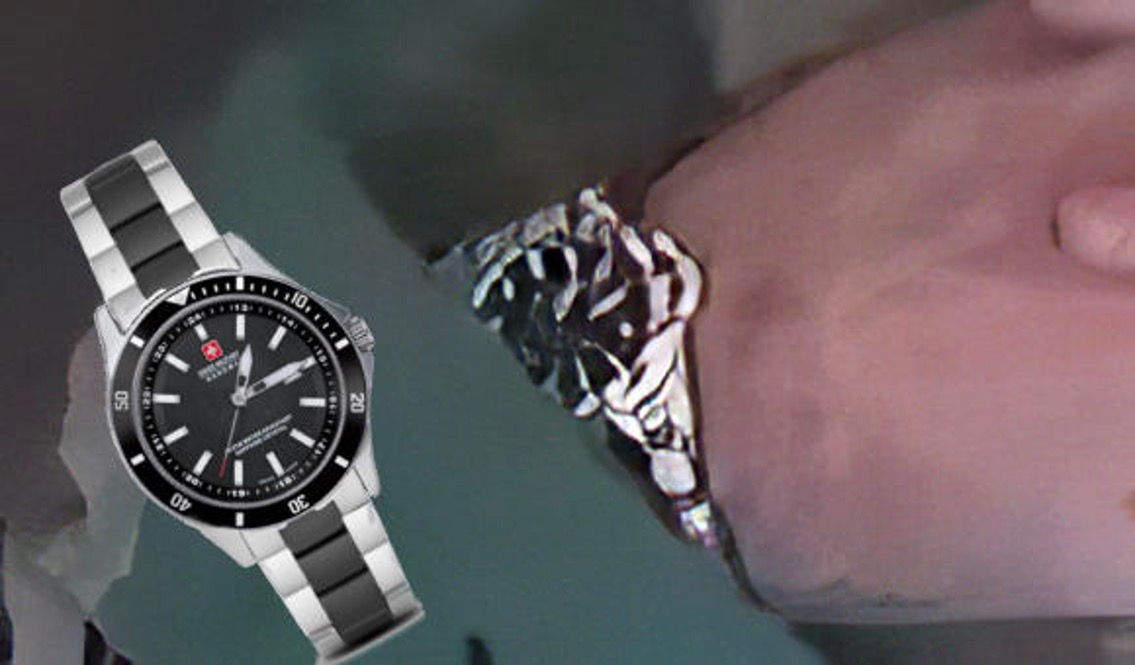 During their visit, the generals at one point observed al Lataminah, and the SANA report includes footage of what appear to be airstrikes on the city. By drawing straight lines through fixed points on the map, we can establish linear areas where the strikes shown in the SANA video took place in al Lataminah. 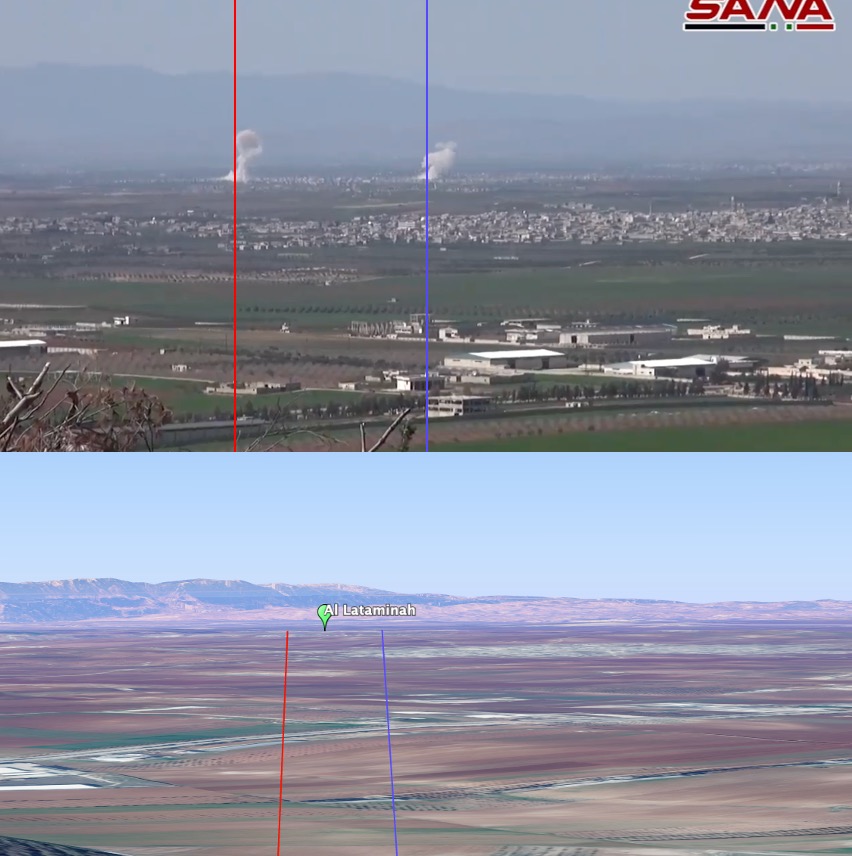 Lines along which the airstrikes seen in the SANA video took place. The yellow circle is the location of the hospital that was struck by a chlorine munition later that day

Although neither of these strikes portray the CW strike on the hospital investigated by the IIT, it does demonstrate that the visitors were observing strikes being carried out on the city of al Lataminah.

The presence of General Ayoub and Brigadier al-Hassan at a command post observing strikes on al Lataminah within two hours of a chlorine attack on that city is a potentially significant fact. If the ISTAR feed observed during the SANA video was indeed live, then they were present at the command post about 30 minutes before the helicopters took off from Hama airbase to attack al Lataminah with a chlorine munition.

Considering the time required for pre-flight checks and loading munitions, it appears likely that this visit took place while a chemical attack was being prepared on the very city that the generals were observing.

As mentioned previously, al-Hassan’s Tiger Forces have been linked to the use of air-dropped chlorine bombs. His presence in a command post on March 25, 2017, observing attacks on al Lataminah, is a potentially significant data point when establishing responsibility for the chlorine attack which took place later that day.