The new OPCW FFM report is consistent with Bellingcat’s earlier investigation into the March 25th 2017 chlorine attack in Al-Lataminah, which took place at Al-Lataminah hospital, an underground facility that was struck by a chlorine cylinder. As with earlier open source reporting on the attack, the OPCW FFM spoke to witnesses who described cylinders being dropped from a helicopter, consistent with other reports of aerial chlorine attacks in Syria. Earlier reporting on the attack put the number of victims around 35, and the OPCW FFM lists details of 33 victims, all of which were male, and included medical staff. The OPCW FFM report also states 3 victims died, consistent with earlier open source reporting, including Dr Ali Darwish, who stayed in the hospital to close up a patient he was operating on, and received a lethal dose of chlorine gas as a result:

In the samples taken from the hospital site the OPCW FFM also found chemicals related to the use of Sarin:

“The FFM further notes the presence of chemicals that may be related to sarin. In the absence of information to the contrary, the FFM does not attribute the presence of these chemicals to this alleged incident, but instead determines their presence as being related to the very likely use of sarin the day before, and the decontamination of patients at this location.”

It is, however, worth noting that samples from the OPCW FFM investigation into a suspected aerial chlorine attack in Saraqib in February 2018 contained chemicals related to Sarin, along with biomedical symptoms consistent with the use of Sarin, but those same symptoms were not documented following the Al-Lataminah attack.

Unlike the March 25th 2017 chlorine attack, the Sarin attack on March 24th in Al-Lataminah went unnoticed, so the OPCW FFM report is the first information we have about that attack. The OPCW FFM describes the attack as follows:

“A witness reported being awoken on 24 March 2017 at approximately 05:45 by the sound of a plane launching at least two munitions in the southern outskirts of Ltamenah. The first munition made impact in the agricultural lands south of the city, producing a mild detonation and generating no smoke (first impact point). The second munition made impact 10 minutes later, about 100 meters south of the first impact point producing a strong detonation and smoke. Another separate witness indicated that the first munition contained a chemical that was not chlorine, and that the secondmone was of a more conventional nature (second impact point).”

The impact sites are also included in the following map published as part of the OPCW FFM report: 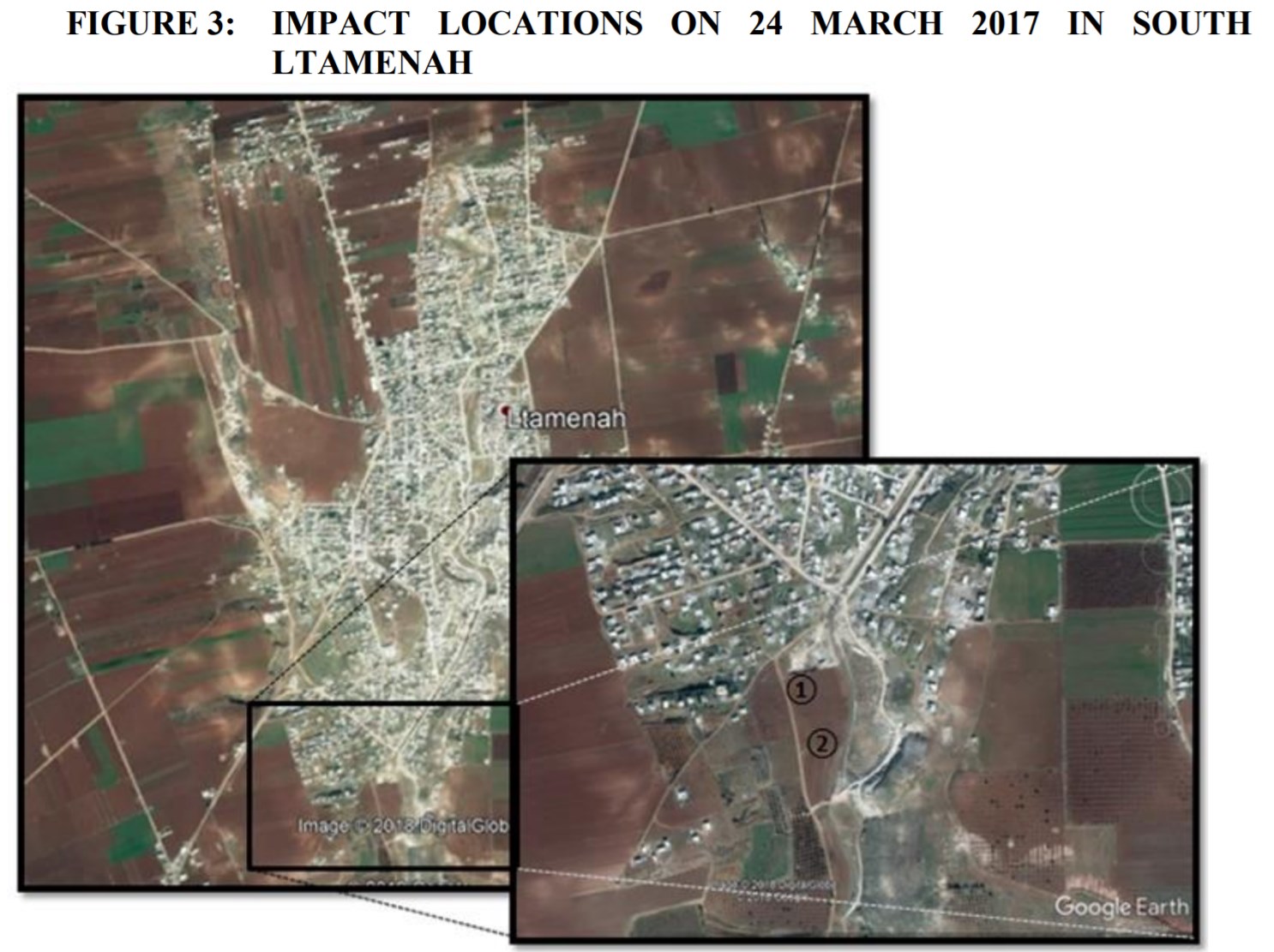 This location is particularly interesting as it is just to the west of an opposition tunnel system previously identified through open sources after the Russian Ministry of Defence posted videos of airstrikes on the location in 2015. In each of the three videos, the Russian MoD falsely claimed that ISIS was being bombed when ISIS was not in the area at the time, and in one case, wrongly claimed the location was in Raqqa:

This site is just north of the site hit during the March 30th 2017 Sarin attack 6 days later, and also documented in the OPCW FFM’s earlier report on the March 30th attack. It appears likely that the March 30th Sarin attack was another attempt to attack the tunnel complex targeted on March 24th, as no other obvious targets are in the area: 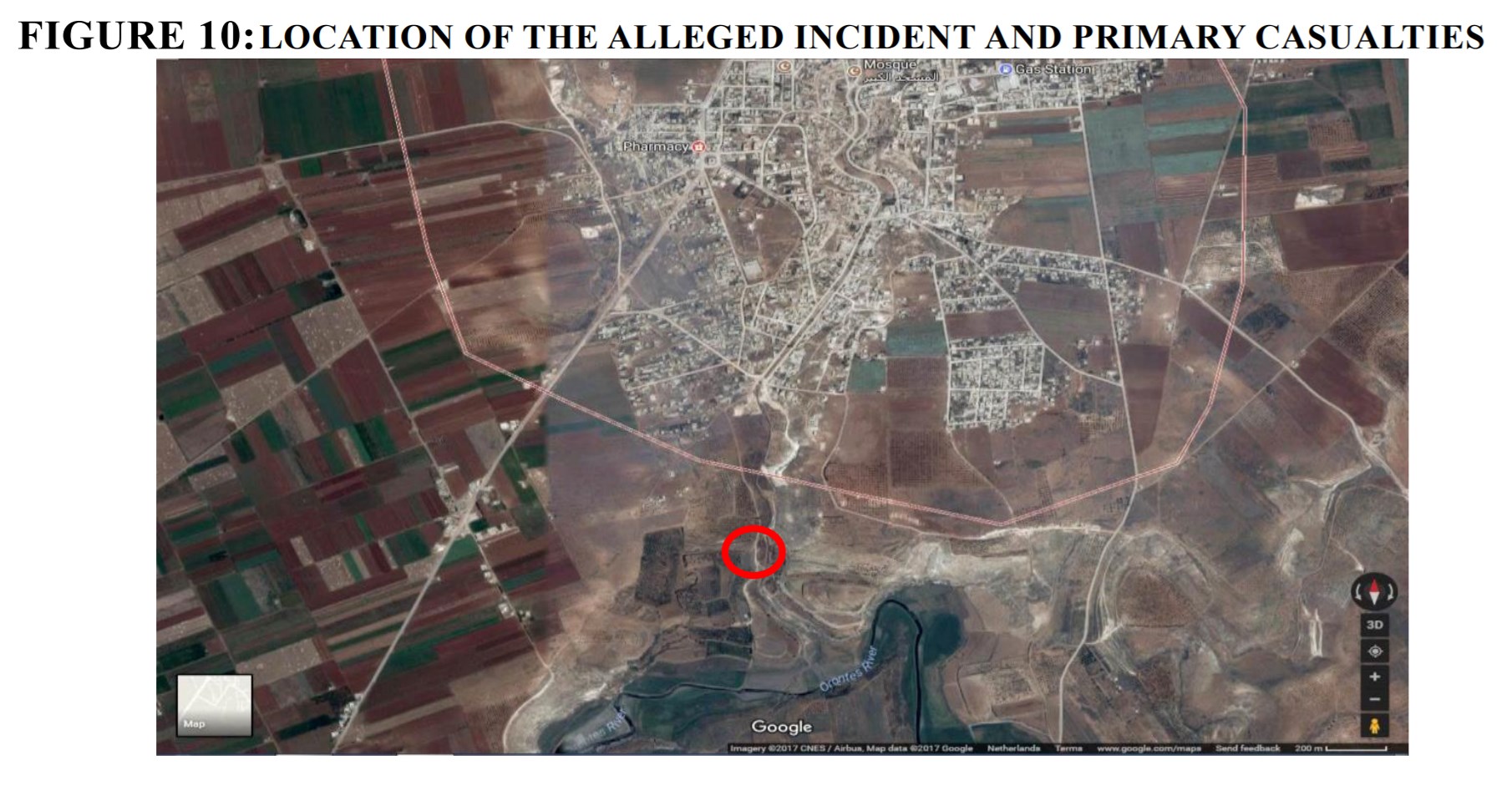 Samples provided to the OPCW FFM were examined, and Sarin, along with other related samples were detected in multiple samples: 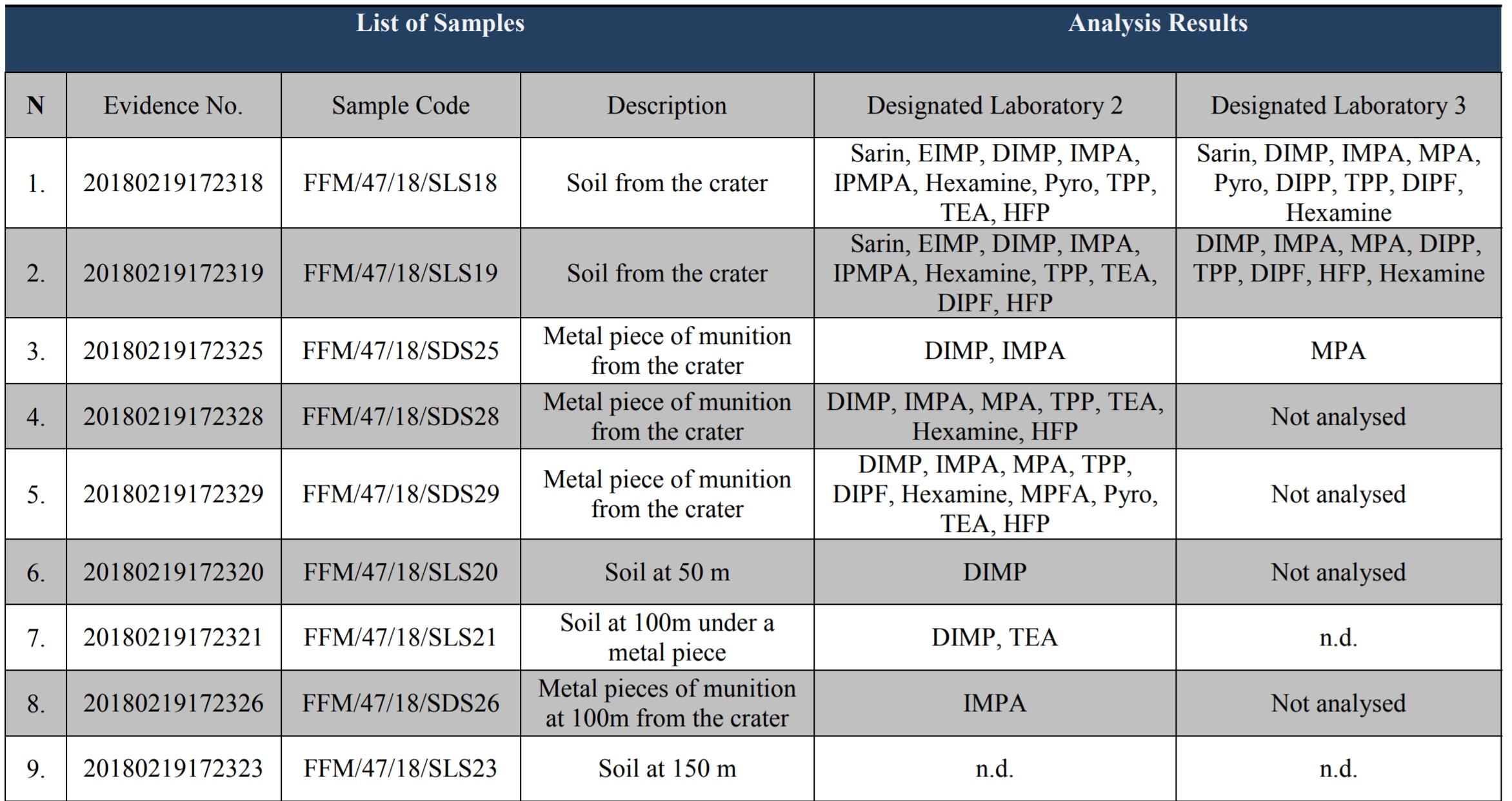 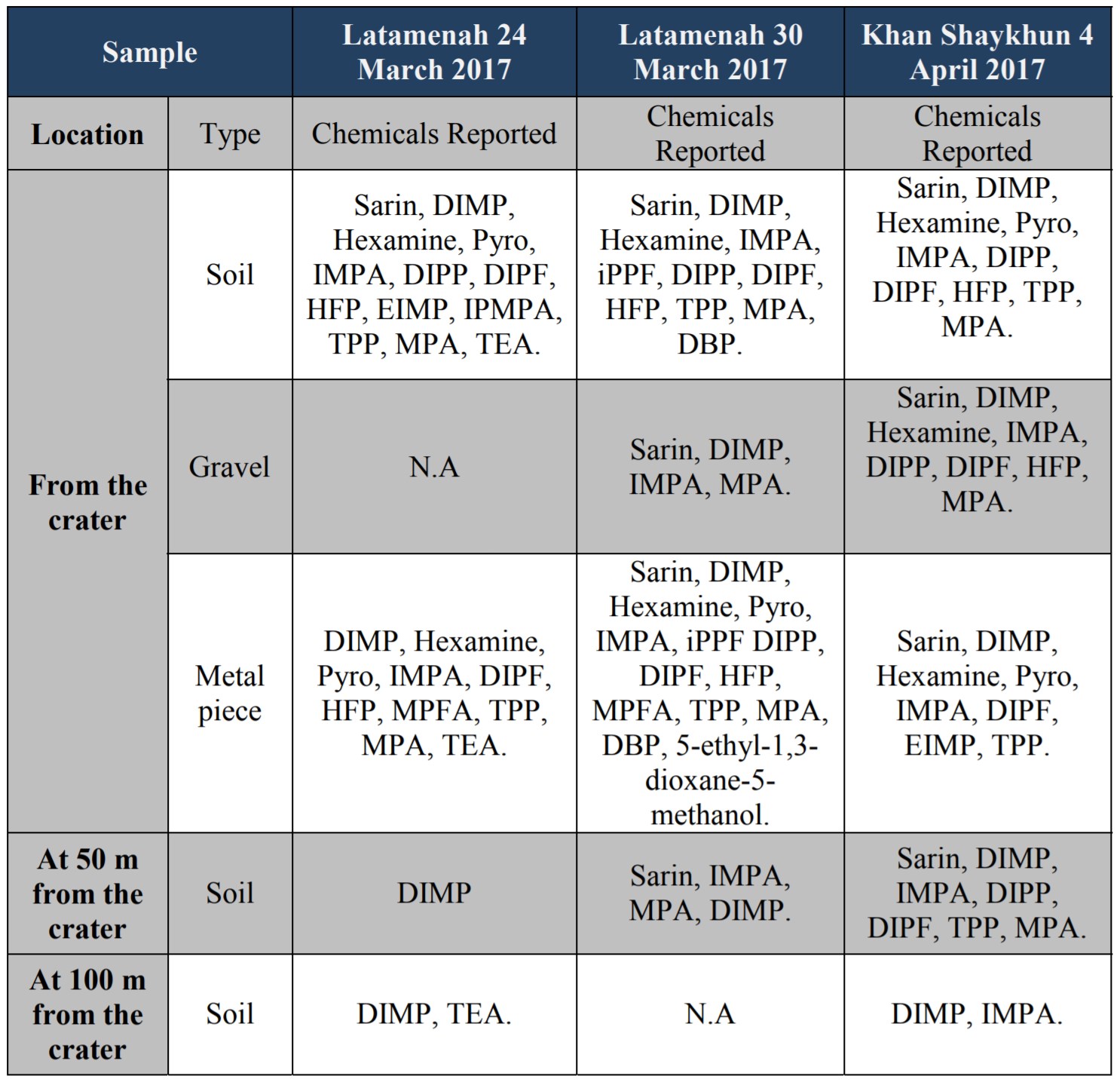 As the OPCW FFM would no doubt be aware, in the OPCW-UN JIM report on the Khan Sheikhoun Sarin attack, the OPCW-UN JIM described marker chemicals that linked the Sarin used to the Syrian government:

“The samples from Khan Shaykhun contain the three types of marker chemicals described above: PF6 [HFP], isopropyl phosphates and isopropyl phosphorofluoridates. Their presence is a strong indicator that the sarin disseminated in Khan Shaykhun was produced from DF from the Syrian Arab Republic stockpile.”

“The analysis results of OPCW designated laboratories confirm the presence of sarin and some of its known degradation products (see OPCW document S/1521/2017, as well as United Nations documents S/2017/567 and S/2017/440). Moreover, the results confirm that sarin was produced by the binary route, in which DF is combined with isopropanol (iPrOH) in the presence of hexamine.”

It seems clear the OPCW FFM is trying to draw a connection between the Sarin used in all three attacks, Sarin they would know has been linked to the Syrian government, even if they don’t state it explicitly. It should be kept in mind the OPCW FFM is not tasked with assigning blame for chemical attacks in Syria, so they would not be expected to explicitly state such a connection, so this appears to be as close as the OPCW FFM can come to blaming the Syrian government for those three attacks.