The town of Al Lataminah in Hama has seen a large amount of military activity during the recent years of the Syrian conflict, including repeated allegations of the use of chlorine gas as a chemical weapon, and more recently confirmation in an interview with the head of the Organisation for the Prohibition of Chemical Weapons (OPCW), Ahmet Uzumcu, that Sarin had been used in a chemical attack on March 30th 2017, 5 days before the more notorious Sarin attack on Khan Sheikhoun. Five days prior to the March 30th 2017 Sarin attack in Al Lataminah there was another chemical attack reported, a chlorine attack on a hospital in the town.

This chemical attack is notable for two reasons; it precedes the March 30th Sarin attack in the same town, and it was included in a graphic produced by the UN’s Independent International Commission of Inquiry on the Syrian Arab Republic that stated the attack was the responsibility of the Syrian government (source) 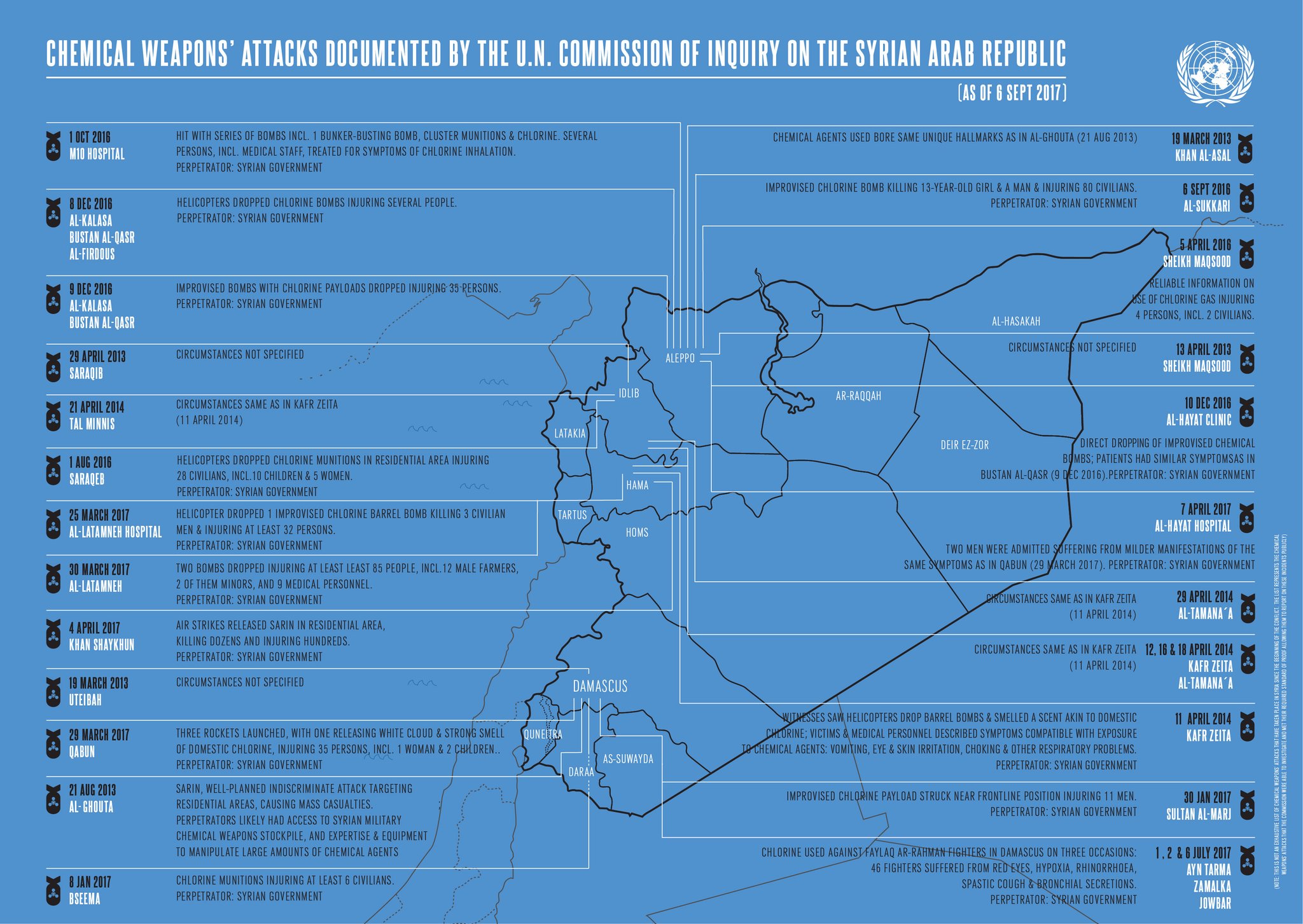 More footage of the same entrance shows a hole in the concrete roof close to the position of the yellow cylinder in the above video, as well as a view of the outside of the building. Bellingcat has verified the location of the hospital entrance in Al-Lataminah, but will not provide details of the location due to ongoing targeting of medical facilities in the conflict:

Syrian Civil Defence in Hama provided other details of the attack, including a different time of attack. In a March 25th Facebook post they state that a helicopter took off from Hama military airport around 2:45pm and attacked the hospital. The post included photographs that showed the same entrance as filmed in the above videos: 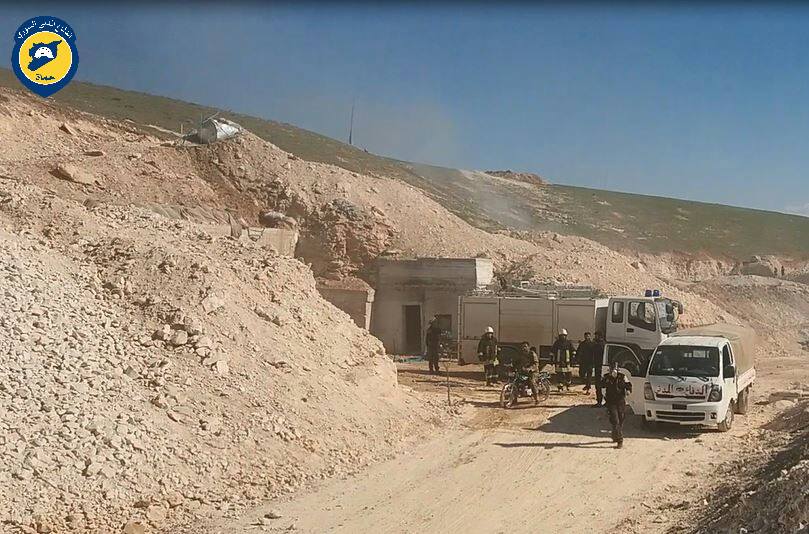 A tweet from the official White Helmets Twitter account shows the same yellow cylinder recovered from the entrance of the hospital, as well as the apparent impact site in the roof of the hospital entrance, and one of the victims of the attack, Dr. Ali Darwish:

2 killed and 30 injured in chlorine strike against hospital in #Hama. pic.twitter.com/UuhvnWjLAR

Hadi Al Abdullah, a Syrian journalist/activist, provided more images from the attack, including images from Syrian Civil Defence showing markings on the yellow cylinder indicating it was used for storing chlorine. These markings are consistent with claims from the ground that chlorine was used in the attack:

The details of the exact impact site and the presence of a damaged chlorine gas cylinder at the impact site are consistent throughout multiple sources of information. The report of the casualties from the attack are also consistent, with the death of Dr Al Darwish reported by multiple sources. In the following video, Dr. Basel Termanini, Vice-President of the Syrian American Medical Society, explains that Dr Darwish was operating on a patient when the attack occurred, and refused to leave without closing the patient, but as a result was exposed to a lethal amount of gas, and he would later die at another medical facility:

The hospital’s spokesperson, Abadah al-Mansour, told Syria Direct on March 26th that Dr Darwish had died after refusing to leave his patient, and the operating technician and anesthesiologist were still in a critical condition. According to the Syria Direct report, a total of 35 people were injured, including medical personnel, and 3 killed, including Dr Darwish and the patient he was operating on.

The information gathered in this report was collected as part of a Bellingcat workshop held in London between October 2nd and 6th by workshop participants, including Eliot Higgins, Christiaan Triebert, Gilbert François Duivesteijn, Jan Kuhlmann, Jasmijn Remmers, and Kris De Groote. For details of the December 11th-15th workshop please email contact@bellingcat.com, or sign up for our newsletter for details of future workshops.