For the Third Time This Year, Chlorine is Used as a Chemical Weapon in Douma, Damascus

As international concerns grow about Syria’s use of chemical weapons, new evidence of the Syrian military’s chemical weapon use continues to emerge from Syria. On the morning of February 1 2018, local activists reported the use of chemical rockets filled with chlorine against opposition held territory in the west of Douma, Damascus:

Urgent || the 3ed #ChlorineAttack against the west neighborhoods of #Douma_city by #Assad regime army.
Three #Chlorine missiles were lounched at 5:30 AM and dropped just on the farms of west #Douma, then the gas spread over the area.
1.Feb.2018 pic.twitter.com/2xD591eZ3w

This represents the 3rd chemical attack reported in Douma since the start of 2018, with two earlier attacks on January 13, and January 22. While munitions are not known to have been recovered from the January 13 attack, munitions used in the January 22 attack were recovered and documented, as were munitions used in the February 1 attack. The design of the munitions recovered in both attacks are identical, and match a design of munition used in a January 30 2017 chlorine attack in Marj al-Sultan, around 8km southeast of Douma. 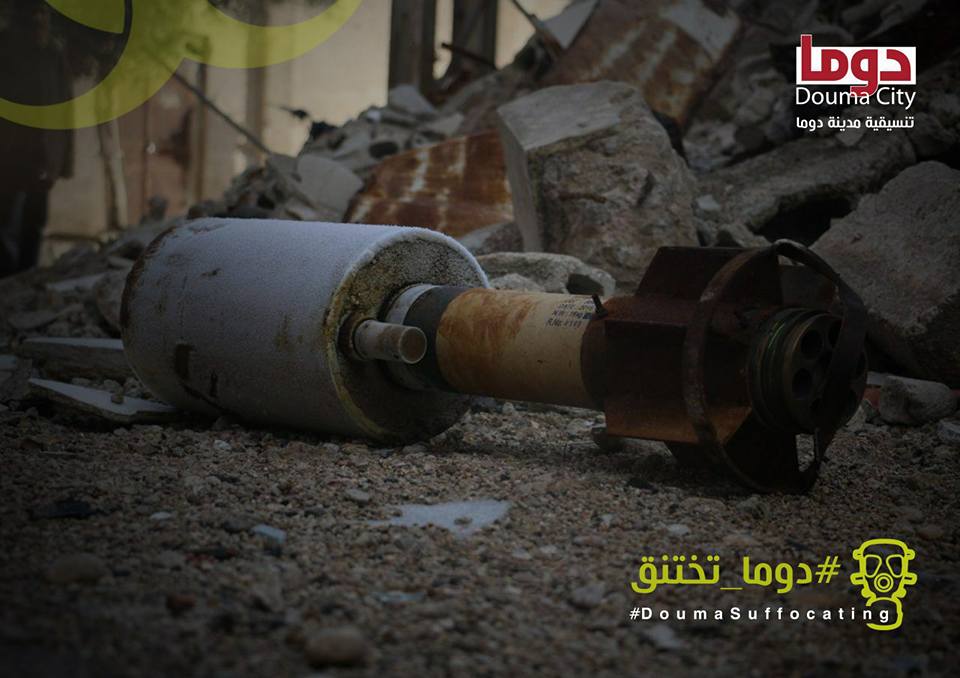 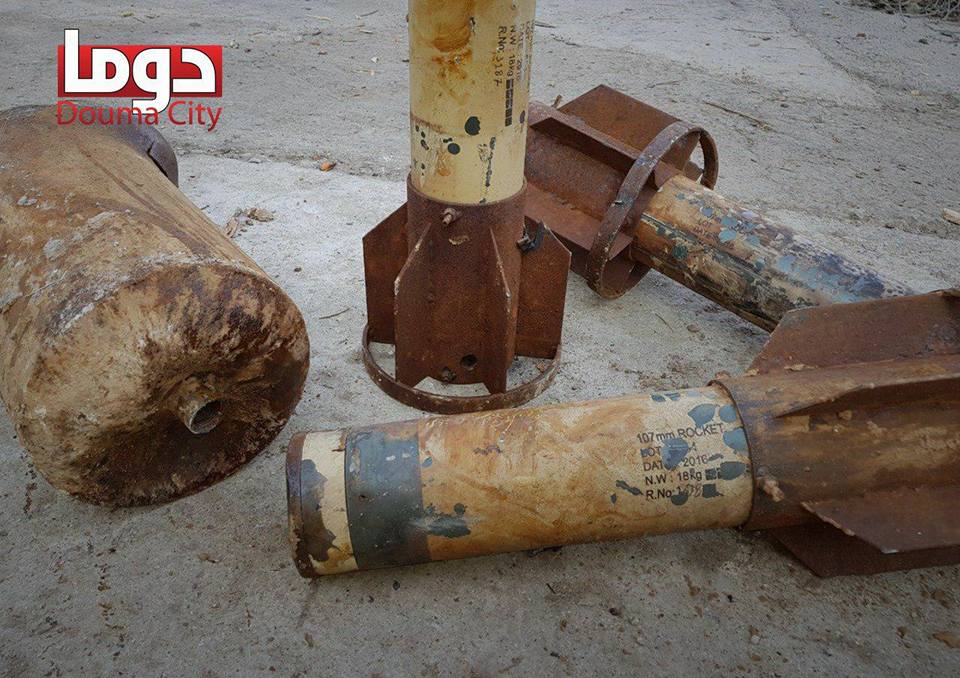 The rockets are based on modified Iranian 107mm artillery rockets, with the explosive warhead replaced by a large gas cylinder, and additional tail fins added to the rocket. In all three attacks the design of the rockets are identical, and in some cases rockets from the 2018 attacks share the same lot numbers, indicating they are from the same manufacturing batch. This strongly indicates that the rockets used in the 2018 attacks would have originated from the same source: 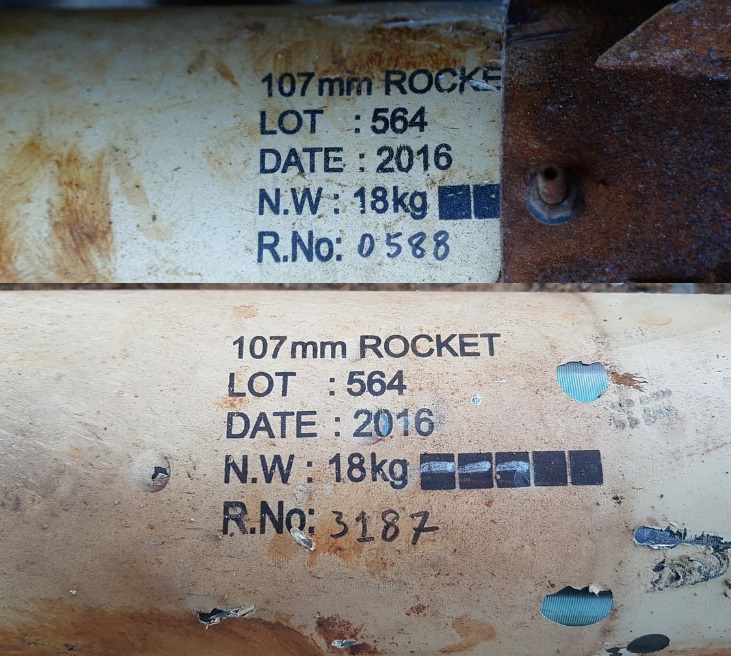 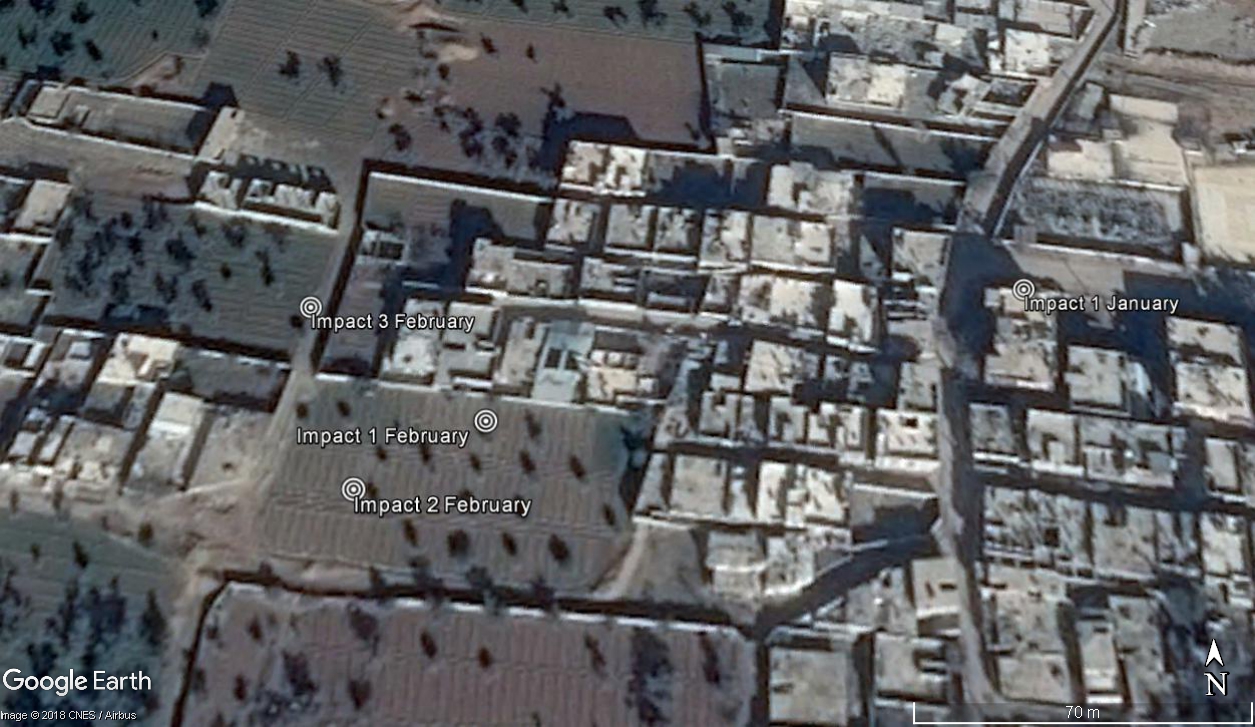 Multiple organisations and individuals have tracked the progress of fighting in the area on a regular basis, showing little movement in the front lines closest to the locations attacked, despite a recent attempt by government forces to capture the area. A map from pro-government “war correspondent, photographer and war map designer” Maxim Mansour posted on January 12 2018, the day before the January 13 chemical attack, shows government forces attacking the area:

The Syrian army advances in northeastern #Harasta in orchards
Where terrorists attack with mortars in the residential Al-Assad Suburb.#SAA #Damascus #Syria pic.twitter.com/bsW8r6n3au

Maps from the pro-government South Front website dated January 18 and January 29 show similar front line positions, with no change between the two dates. Maps from the pro-opposition FSA News also show the same front lines during that period, as does the conflict mapping website LiveUAMap. With this agreement among multiple sources about the position of front line positions the closest government positions to the impact sites would be 400-600m away.

It is also possible to establish the likely trajectory of rockets used in the February 1 attack. In one geolocated video, Firas Abdullah films the impact crater of one of the rockets:

Urgent || the 2nd #Chlorine missile of the #ChlorineAttack against the west neighborhoods of #Douma_city
1.Feb.2018 pic.twitter.com/Yzg3r8FwXh

The shape of this crater indicates the rocket would have come from the west, from the direction of the Syrian government positions around 1km away. In another video, we see an impact site where the warhead of the chemical munition is still embedded in the ground:

#Urgent || the 3ed #Chlorine missile of the #ChlorineAttack against the west neighborhoods of #Douma_city
1.Feb.2018 pic.twitter.com/mD0fAUB4to

SAMS-USA reported that “a SAMS-supported hospital in East Ghouta received 3 patients suffering from suffocation, a dry cough, and vomiting, all of which are consistent w/ the use of chlorine gas. Victims include 2 women & a 16-year-old.”. Ghouta Media Center reported that one civil defence member was injured in the attack. Local reports state the chlorine attack was then followed by a day of heavy shelling in Douma, resulting in the death of two children and multiple injuries.

The research for this publication was supported by PAX for Peace.