Following the attack ordered by Donald Trump on Syria’s Shayrat Airbase in response to the April 4th 2017 Sarin attack in Khan Sheikhoun, the lack of press reports about chemical weapon attacks in Syria may lead the casual observer to assume chemical weapon use in Syria had ceased, until the January 22nd 2018 chlorine attack in Damascus. Regarding the January 22nd 2018 attack, US Secretary of State Rex Tillerson stated that “Only yesterday more than 20 civilians, mostly children, were victims of an apparent chlorine gas attack”, and that “The recent attacks in Eastern Ghouta raise serious concerns that Bashar al-Assad may be continuing to use chemical weapons against his own people.”

However, while the January 22nd attack caught the attention of Rex Tillerson and the media, many more attacks have been alleged throughout 2017 and into 2018, with many attacks reported after the US airstrikes on Shayrat Airbase. Since the beginning of the year at least 4 attacks have been reported, with 2 in Damascus, and 1 in Idlib.

#Assad regime army has attacked the west frontline of #Douma_city with #Chlorine gas, 3 ground-to-ground missiles were lounched at 6:10 AM.
The gas spread over the nearest neighborhoods.
7 suffocation cases so far, nobody is in the streets..
We safe untill other notify… pic.twitter.com/Xc5Hdj8Ebu

The January 13th attack was investigated by Syrians for Truth and Justice (STJ), which described it as the “first attack in 2018 when chlorine gas is used as a weapon in Ghouta”. According to statements in the STJ report, the attack occurred around 6am, with the chlorine delivered using surface to surface rockets, with several civilians injured, mostly women and one child. Reports of chlorine use in Damascus are unusual in that many other reports of chlorine use have involved the use of chlorine cylinders dropped from helicopters, initially using a barrel bomb casing and detonator, but more recently using nothing more than gravity to break open the cylinders and release the chlorine: 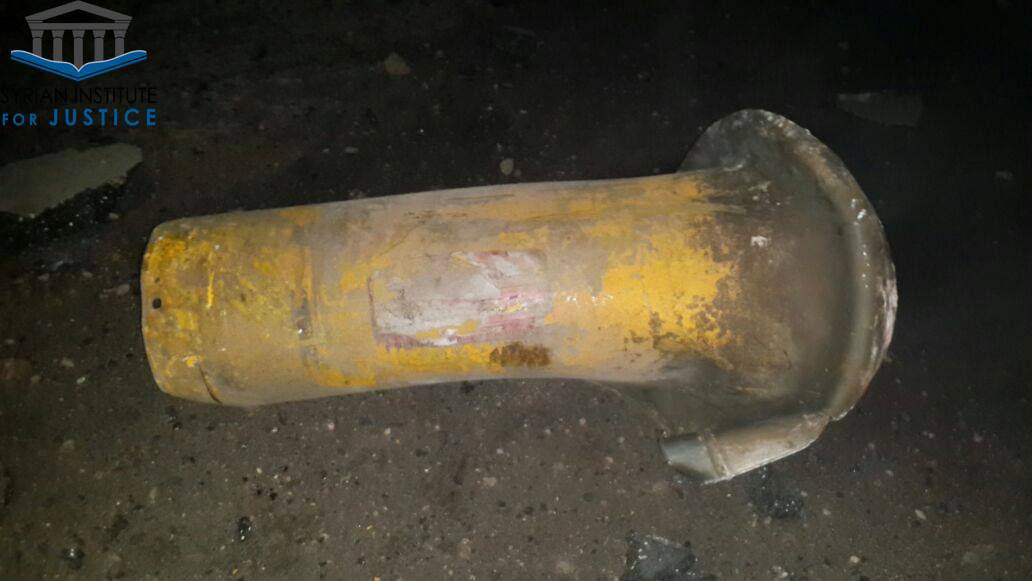 The remains of a chlorine cylinder used in an attack in December 2016.

The STJ report also refers to earlier chemical attacks in Damascus, including a December 30th 2017 attack, several attacks during the summer and an attack in November. All attacks occurred after the bombing of Shayrat Airbase, and, disturbingly, some of these attacks appeared to use chemical agents that caused symptoms similar to Sarin, in particular constricted pupils.

In the majority of the attacks reported since the bombing of Shayrat Airbase there has been no evidence of the munitions used presented. Various explanations have been given for this, from a lack of thorough documentation to a lack of access to the impact sites of the munitions, but the remains of munitions play a key role in evidencing that a chemical attack took place, and understanding the nature of the attack.

The January 22nd 2018 attack is quite different in this regard. Multiple images of the munitions used in the attack were published online, showing the munitions in detail: 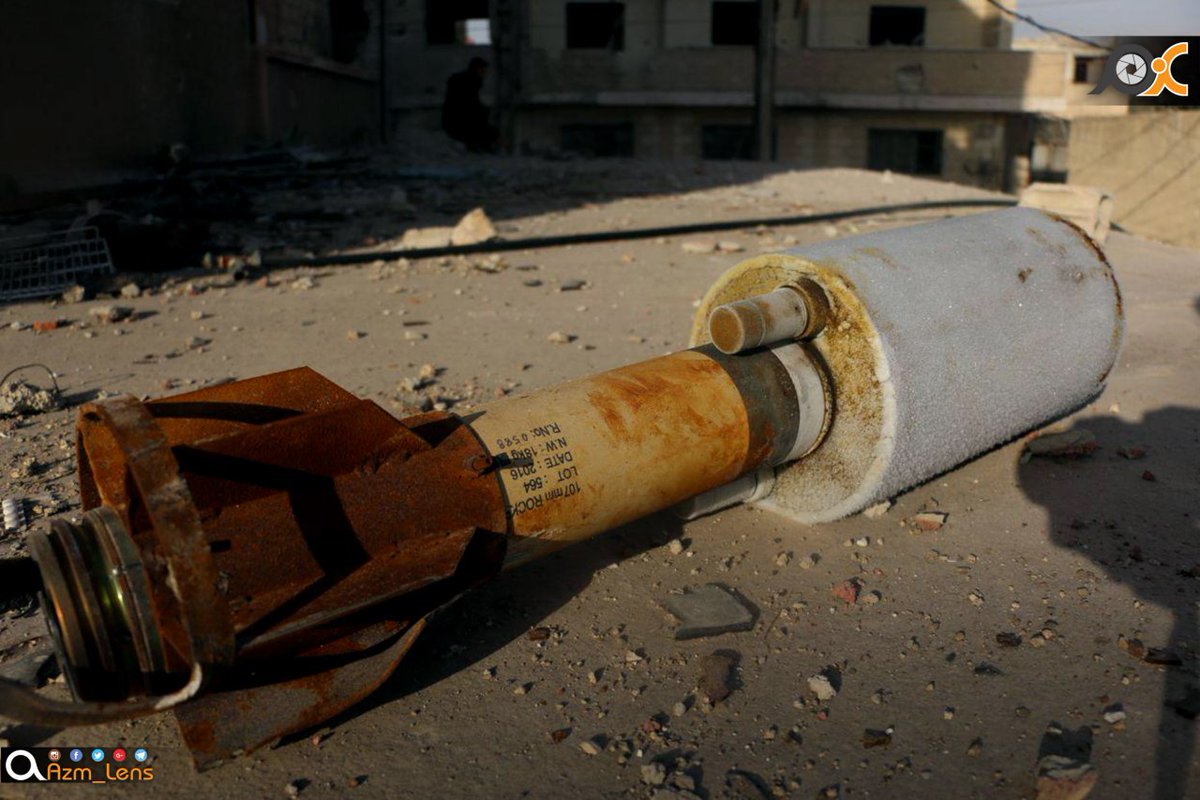 The munitions are what are known as IRAMs, Improvised Rocket Assisted Munitions. A standard artillery rocket, in this case an Iranian 107mm rocket, is modified, adding a new, oversized, warhead, and stabilising tail fins. IRAMs have been used throughout the conflict, and have become a key part of the arsenal of units fighting in urban environments, with their heavier warheads increasing firepower but reducing range. 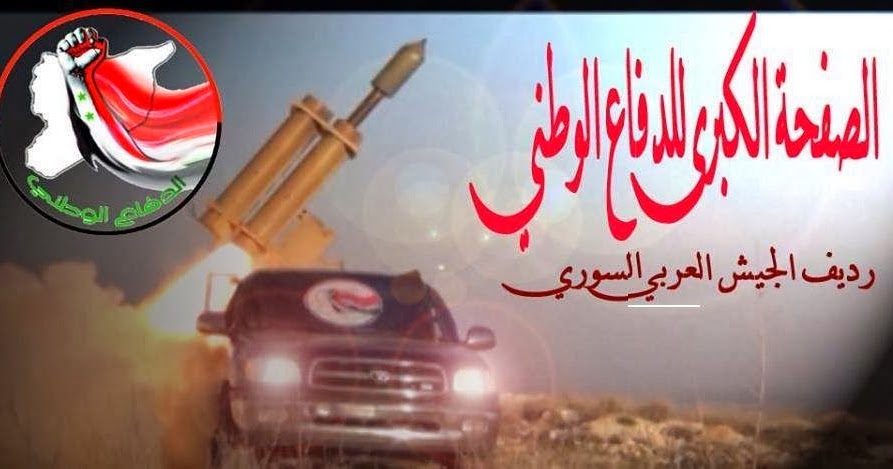 Several of these rockets were used in the January 22nd attack, resulting in over 20 injuring, including babies and children. The design of the munitions used in the attack is very close, if not identical, to munitions used in a chlorine attack against opposition forces that took place nearly a year earlier, on January 30th 2017 in Al-Marj, just east of Damascus.

The same type of Iranian 107mm rocket is used, with an identical tail fin assembly, down to the position of the bolts. Although difficult to see in the 2017 imagery, at least one port in the rear of the warhead is visible, also visible in the 2018 images: 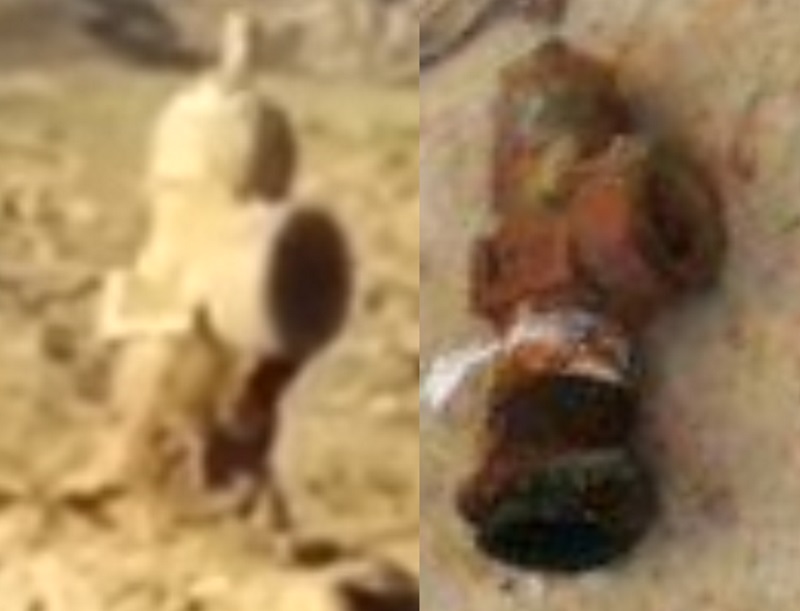 Although there are multiple, distinct, matches, the 2017 munition was not as well documented as the 2018 munitions, so it is not possible to say that every element is identical, but at the very least it is possible to say that if the munition is not identical, it is an extremely similar design. These similarities indicate the munitions came from the same source, and as both attacks were against Syrian opposition groups, it seems reasonable to say that both chemical attacks were likely carried out by the Syrian government. That being the case, it is clear that Trump’s red line has been as effective as Obama’s red line at preventing the use of chemical weapons in Syria, and with the recent Russian veto of the continued work of the OPCW-UN Joint Investigative Mechanism in Syria it is unclear what the next steps will be, if any.

The research for this publication was supported by PAX for Peace.