Verified and False Footage of the Iran Protests

The Islamic Republic of Iran is witnessing the largest anti-government demonstrations since the 2009 presidential elections protests.

Via social media, it is possible to get a sense what’s going on, for example by searching on Twitter for the most ubiquitous hashtags in English and Farsi: #IranProtests and #اعتراض_سراسری.

Social media footage is a way to get a better understanding of what is going on in Iran. The tough digital environment in Iran (and for example the blocking of and removal of Telegram channels) might mean that the analysis based on these social media footage may be hours if not days behind the pace of events, King’s College London lecturer Alexander Clarkson noted.

But it is important to be aware of mislabeled and misattributed footage.

Sometimes, it is really easy to spot a fake. Take the following tweet, for instance, which includes two photos of “an Iranian student” who “decided to remove her veil” and was last seen at a protest at Tehran University. 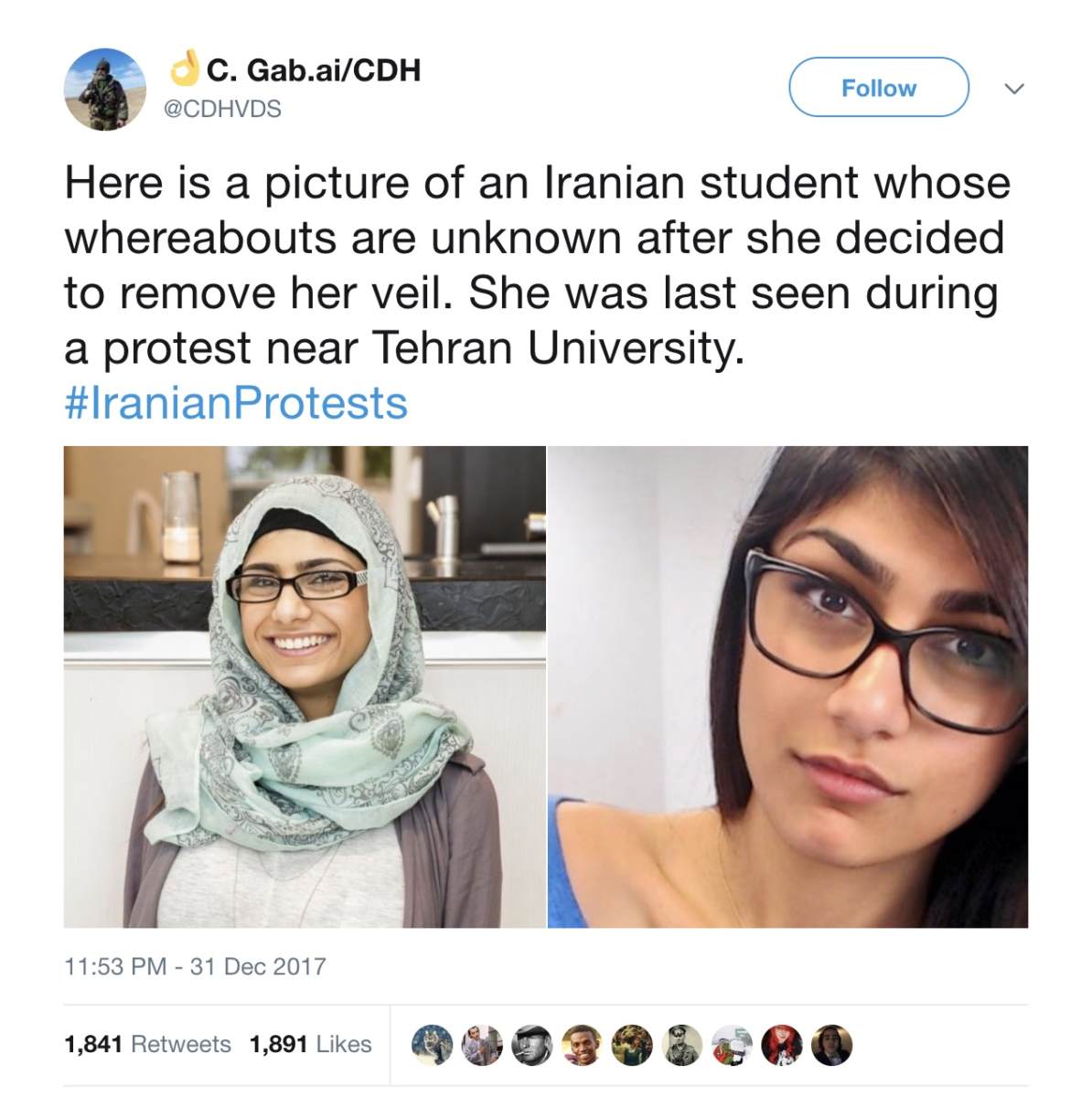 However, a simple reverse image search shows that the lady is known as Mia Khalifa, a social media personality best known for her career as pornographic actress.

Misattribution is a common problem, as was also highlighted by Twitter @jxckhy tweeted. Indeed, none of the photos or videos are showing the current and ongoing protests. Let’s have a closer look at each one of the images and videos. 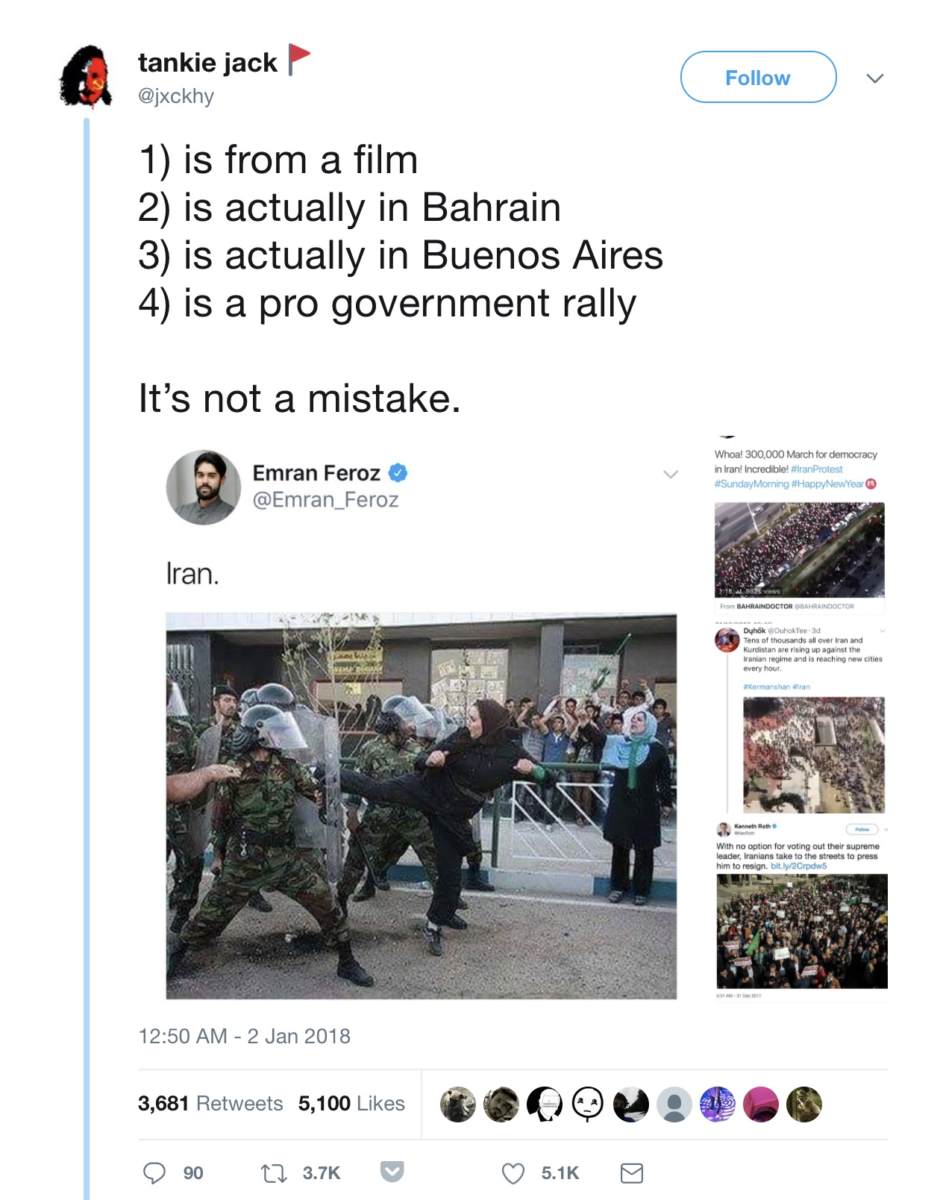 The first tweet shows a photo of a woman wearing a hijab gives a flying kick to a group of (riot) police, simply captioned “Iran”. The same photo was also shared by others, such as GreenLeft.org. This may give the impression the photo is from the current protests. 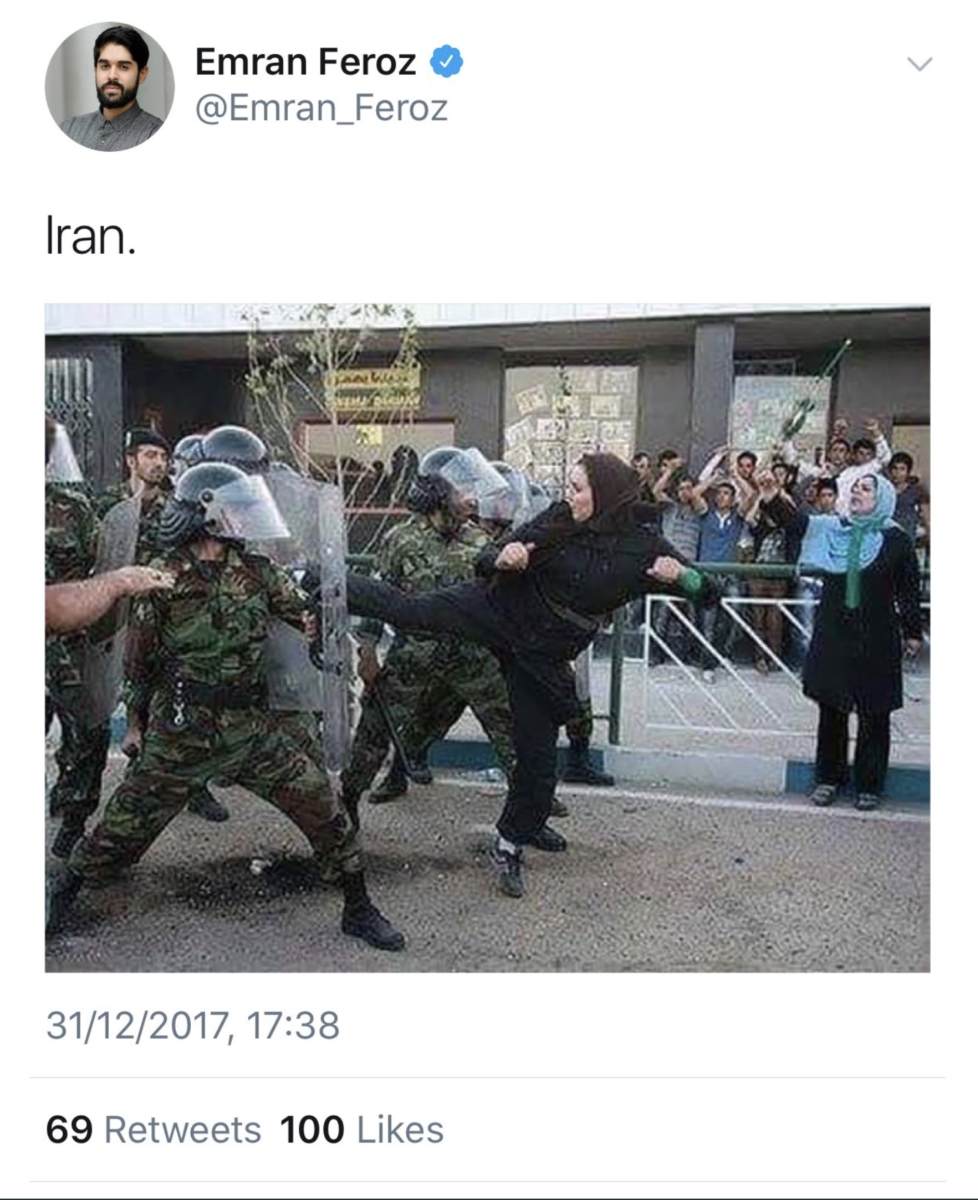 But it is not.

A simple reverse image search shows that the photo is not recent. One of the results on Google leads to a 2014 article by Mashreg News, and hints towards it being from a movie called “The Golden Collars” (Farsi: قلاده های طلا).

The 2012 pro-government block-buster depicts a group of Iranian expatriates which plan to instigate riots in the aftermath of the 2009 Iranian presidential elections. The photo is part of a series of images showing scenes of the movie.

The specific scene is just over an hour into the movie and the same actress can be seen at the same location. The specific photo appears to have been one of the several photos published by the movie makers at the time.

Emran Feroz, a journalist who shared the photo, says he was aware it was from a movie. He saw the photo on the social media feeds of his Iranian friends who “shared it symbolically”, like him. Nevertheless, he apologises for the “misleading” tweet. He has also made this clear in a thread on his Twitter profile.

The second tweet is an embedded video shared by Twitter-user @KamVTV saying it shows “300,000”protesters marching “for democracy in Iran”. Sometimes, a hint towards misattribution can be as easy as reading the title or the uploader of a video – in this case, “BAHRAINDOCTOR”. The video namely shows the “March of Loyalty to Martyrs” (Arabic: مسيرة الوفاء للشهداء‎) rally on February 22, 2011, in Manama, Bahrain, where tens of thousands participated during the Bahraini uprising. The video also clearly shows the Bahraini flag. You can watch the original video on YouTube. The tweet is still online as of writing.

The third tweet is another video, this time claiming to show tens of thousands “rising up against the Iranian regime”. The tweet has been deleted since, though is still online on other profiles. However, this is a video of protests in the Argentinian capital Buenos Aires in early December 2017. (You can actually hear people speaking Spanish in the video.) 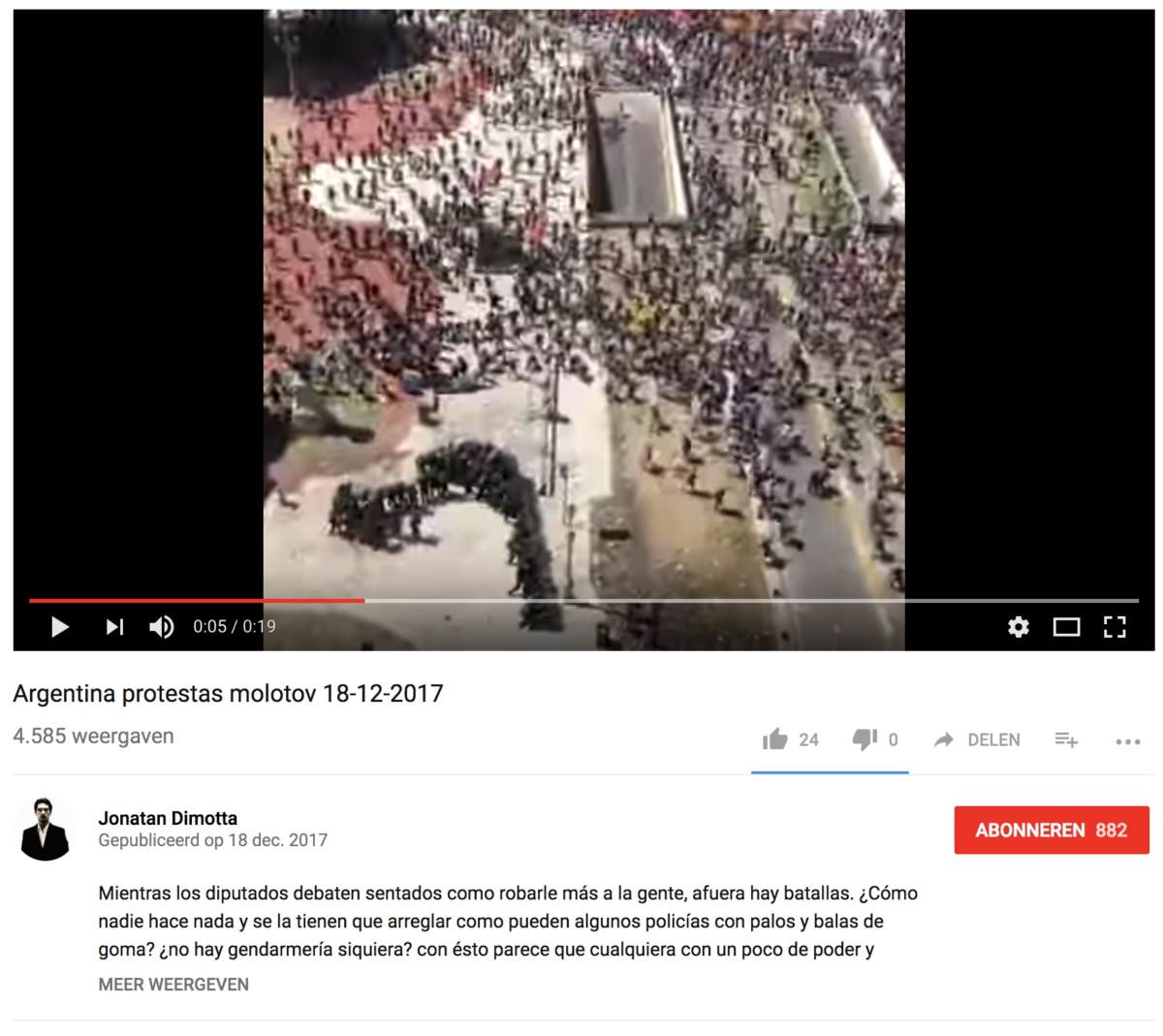 The fourth and last tweet is a screenshot of a now deleted tweet of Human Rights Watch director Kenneth Roth, saying “With no option for voting out their supremes leader, Iranians take to the streets to press him to resign.”

However, the attached photo shows that it is a pro-, not an anti-government, rally in Tehran. Again, a simple reverse image search would have done the trick.

From the four tweets, three of them clearly show non-related events. Roth’s tweet simply shared the properly attributed photo from the Times.

Besides, Feroz’ has commented under his own tweet and told Bellingcat that it “shows that people, especially journalists and activists, have to be very careful on social media. There are always many actors who wait for such mistakes or misleadings to use them for their own agenda.”

And that is indeed happening. German public-service television broadcaster ZDF, for example, broadcast a video taken during the 2009 protests as if it was 2017. (Although they rectified it within a day, they are still getting mocked for it.)

For that very reason, it is important to try to verify footage before sharing it; because the misattributions and fakes will just continue to spread on social media. (And that while there is plenty of verified footage from the Iranian anti-government protests.)

Tips to Verify Footage Yourself: