“We are one of the five leading countries in the world in the area of drone technology”, beamed Iranian General Sharam Hassanejad of the Vali-e Asr drone force in an interview with Iranian state media last October.

The general’s words were not an empty boast. Iran has amassed a significant arsenal of drones — an arsenal which satellite imagery can reveal in hitherto unseen detail.

On January 4, 2021, a WorldView-2 satellite captured a part of Iran’s drone fleet on a remote airstrip in the desert near Semnan in the country’s North. The image it took was exclusively provided to Bellingcat by European Space Imaging, showing over 154 drones of various types lined up for a large exercise by the Iranian armed forces on January 6. 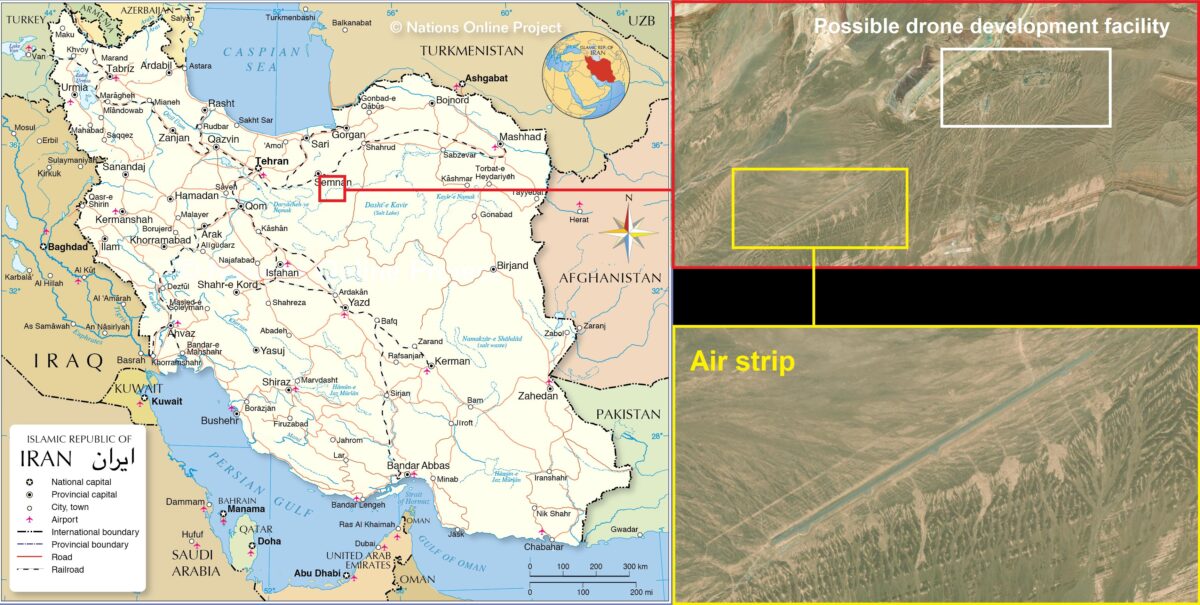 Map of Iran courtesy of the Nations Online Project. Reproduced for educational purposes.

Video of Iranian Army UAVs getting ready for the exercise near Semnan. Mohajer-6, Kian (Arash), Kaman-12, Karrar, and Ababil-2 are among UAVs seen in the video. pic.twitter.com/32PT1jMLGS

Iran’s drone programme has gone international, with various Iranian-manufactured drones showing up in Iraq, Sudan, Syria, Venezuela and Yemen. Furthermore, Iran was blamed by Saudi Arabia and the United Nations for the attack on the Aramco oil facilities in September 2019.

The country’s drone arsenal includes everything from target drones (former President Mahmoud Ahmedinejad’s infamous ‘Ambassador of Death’) to medium altitude, long endurance armed drones such as the Shahed-129, used in support of the Syrian regime of Bashar Al-Assad.

More recently, Iran has come under scrutiny for its research and development of suicide drones, also know as loitering munitions. A potential sign of the reach of Iran’s drone programme can be seen in the suicide drone attacks launched by Houthi forces in Yemen. The Houthis’ Samad-type drones share many design features with the Ababil-2 model shown in Iranian drone parades, as demonstrated by the Conflict Armament Research group.

Nevertheless, it’s important to mention that Iran has more than one drone programme. The country’s army and the Iranian Revolutionary Guard Corps (IRGC) both operate their own drone programs. Whereas the IRGC is focused on aiding Iran’s allies in Syria and Yemen, the armed forces are primarily concerned with national defence. The army’s drone division, the aforementioned Vali-e-Asr group, conducted the January 6 drone exercises, although some sources reported that it was held under the supervision of the IRGC.

The satellite imagery below shows a line-up of various drones. By using open-source identification guides such as the Oryx Handbook of Iranian Drones, we can walk through their types and possible use. The image itself was sharpened for better views by the open-source Twitter group @AuroraIntel.

The drones visible include:

Other drones present at the airstrip were either too small to be properly identified by satellite imagery alone, or there was no additional TV footage of the drone exercises to further verify the drone types in use. Iran clearly learned from reverse engineering drone technology captured from Israeli and US drones in Afghanistan, Iran or Syria, with types such as the Yasir small drone based on the Boeing Insitu ScanEagle, and the Shaher type drones have strong resemblances with the Israeli Hermes drones. Oddly, this drone parade didn’t show any of the Saeqeh/Simorgh drones, whose shape was based on the US RQ-170 Sentinel that crashed in Iran’s western desert in 2011.

This imagery and footage shared by Iranian state-sponsored media agencies reveal the sheer scale of the resources Iran has put into building a diverse set of drones for all purposes, ranging from strike-enabled drones to small short and long-range suicide drones and smaller surveillance drones.

Moreover, this image shows that Iran’s armed forces are using increasingly sophisticated drones — something which in the past was mainly the preserve of the IRGC.

Social media footage of the event at this airbase and a similar drone parade at another drone base also indicates that Iran is stepping up its efforts to attach precision guided missiles to its drone arsenal.

To what extent these innovations have been successful and effective will remain unclear until proven on the battlefield.

Thanks to Adam Rawnsley, @Oryx Spioenkop and @AuroraIntel