Since the Islamic State first systematically started using commercial off-the-shelf (COTS) drones to drop munitions in 2016, the use of small, remotely controlled airborne devices to carry out attacks has been replicated around the world, from rebels in Ukraine, to Mexican cartels. It’s a low-cost tactic that now appears to have been adopted by some anti-coup, armed groups in Myanmar.

Over the Christmas and New Year period, two videos were posted by two separate groups, each showing makeshift explosive munitions being carried and dropped by small drones. In the first video, posted in late December by the Karenni Generation Z Army (KGZ), a small team is shown launching a DJI Phantom drone modified with a release mechanism and armed with a small munition. The second video, posted by the Aung San Force-MPDF on 2nd January, shows six strikes, as well as footage from drones observing what seem to be indirect fire attacks.

According to the news website Myanmar Now, the KGZ is a rebel group active in the Kayah State in the country’s east. The Aung San Force, meanwhile, is reported by Myanmar Now to be a self-organising resistance group. Both were reportedly formed in the aftermath of the February 2021 coup, which resulted in protests and a brutal military crackdown.

It is unclear if any other anti-coup groups in Myanmar have employed similar tactics. A number of militias of varying size and capability have formed in the year since the Myanmar military took control of the country despite Aung San Suu Kyi’s  National League for Democracy winning a landslide in elections.

These militias pale in scale, experience and capability when compared to more organised ethnic rebel groups, some of whom have been operating in Myanmar for decades. And while some of these more established groups are reported to have assisted anti-coup outfits, the dynamics that underpin these relationships remain complex, ever evolving and are not uniformly replicated across the country.

That being said, analysing the deployment of such weapons remains a useful exercise, allowing us to observe the innovations, influences and tactics employed by some sub-state armed groups in Myanmar.

This video shows six strikes carried out by drone; the accompanying post suggests it was taken during operations in the Sagaing Region in the country’s northwest and then posted to social media on January 2. While we don’t see the drone itself, we do get a decent look at the munitions, as well as the effect they have on the ground. 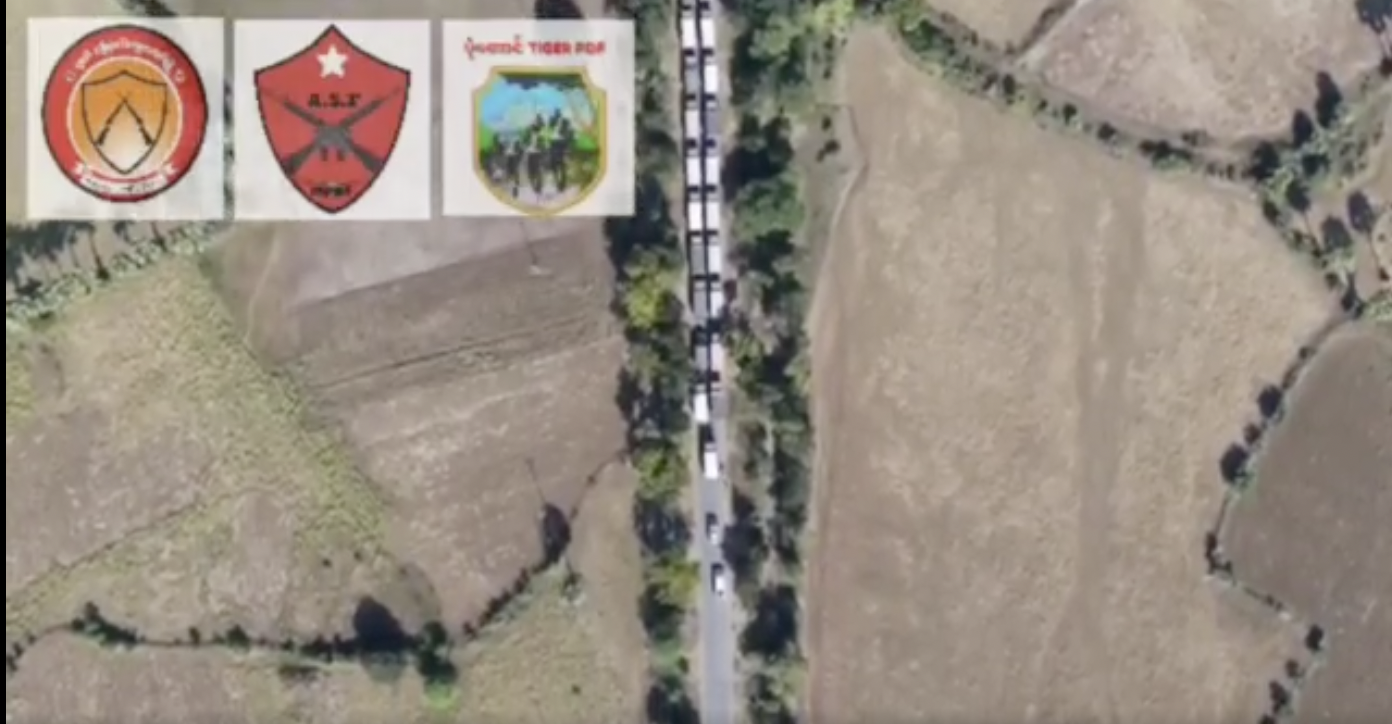 A screen grab of footage from a drone video posted to the Facebook page of the Aung San Force-MPDF.

Although the quality of the video limits analysis, it’s possible to draw some firm conclusions about their nature. The munitions themselves appear to be either the same or of very similar design to each other. The Aung San Force does not appear to have modified a conventional munition, as the Islamic State did with 40mm grenades and the PKK have done with 30mm grenades. The fins at the back and a plunger at the front of the munitions strongly indicates they have a simple point-detonating fuze. Some of these examples appear to be covered in a wrap of some kind. 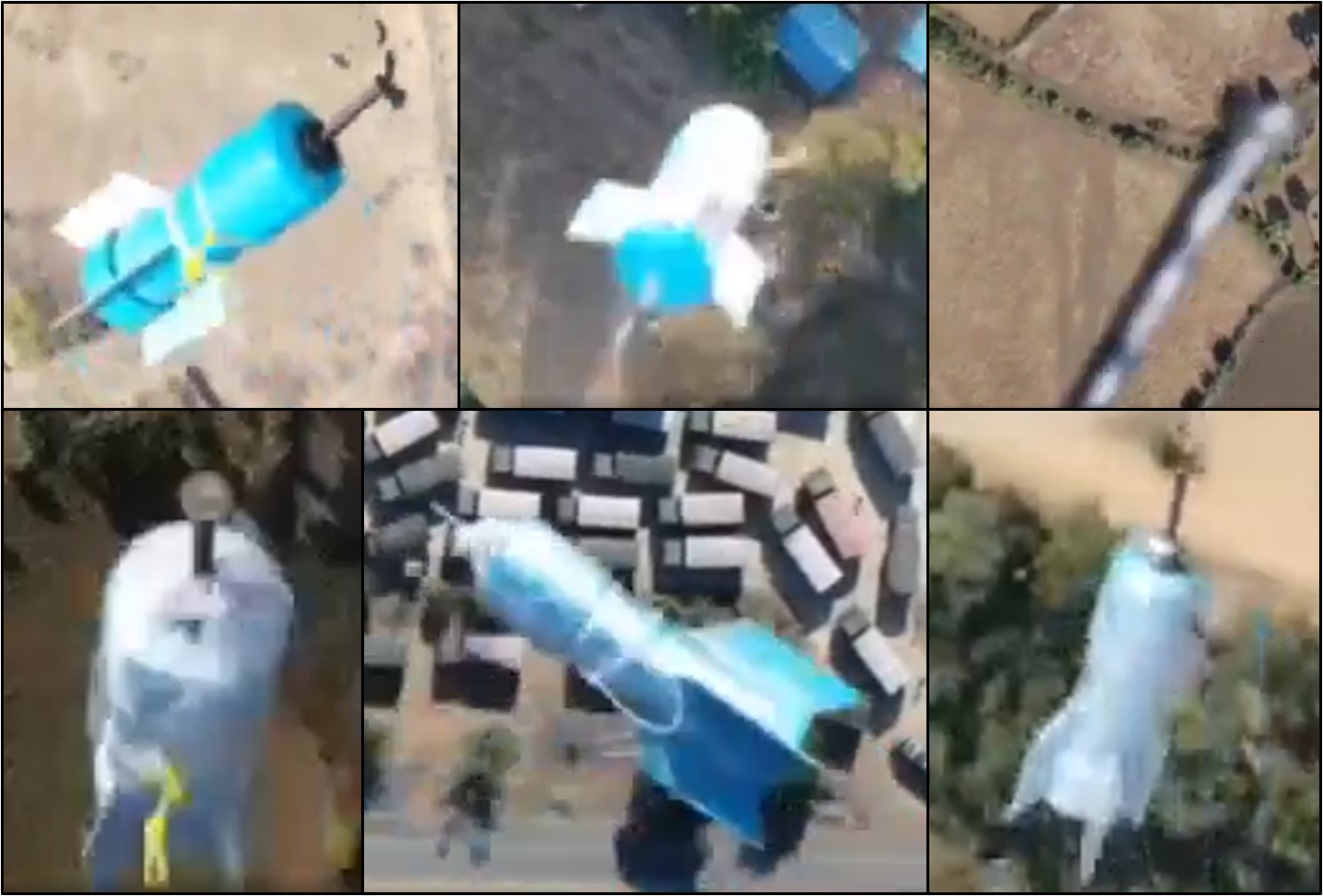 Munitions filmed dropping from a drone and posted to the Facebook page of the Aung San Force-MPDF.

While these are relatively small, simple munitions, they clearly do the job they were designed for, producing a small blast on the ground. Their similarity to one another also indicates a relatively consistent manufacturing process. It is clear that thought has been put into the design and production of these munitions, rather than simply being an ad hoc attempt at weaponisation.

This is in contrast to other attempts at weaponisation of drones elsewhere in the world that have varied from well planned and effective to ineffective and suspiciously slapdash.

The KGZ video is less obviously instructive. Although we see the drone and the munition, the quality of the video is such that it’s difficult to make many useful observations about either from this clip by itself. Indeed we don’t even see the moment of impact of the bomb, making any assessment of effectiveness (or if they even detonated) impossible.

A panning aerial view of buildings, presumably filmed by the drone itself could be geolocated to the area around a police station in Demoso, a town in Kayah State.

KGZ released this video of using drone to drop a bomb onto fascist position.
If the resistance can effective utilize such tactics, this could change the war. There are even bigger drones on open market.#WhatsHappeningInMyanmar pic.twitter.com/4N2njvOm6Z

The drone is a DJI Phantom, versions of which were used widely by the Islamic State, and has been modified with a release mechanism to drop the bomb.

Footage posted by KGZ fighters shows a weapon being attached to a small drone.

Although we don’t see too much of the munition used by the KGZ in the video, a post on their Facebook page displays clear images of devices that appear to match those on the drone.

As with the Aung San Force bombs, they do not appear to be modified conventional munitions, but rather improvised from scratch. A strip of metal foil is visible at the tip with wires leading to the base where what appear to be batteries are embedded. This indicates a crude electric contact fuse. When the munition makes impact with the ground, the foil will crush onto the front of the munition, completing the circuit and detonating the bomb. 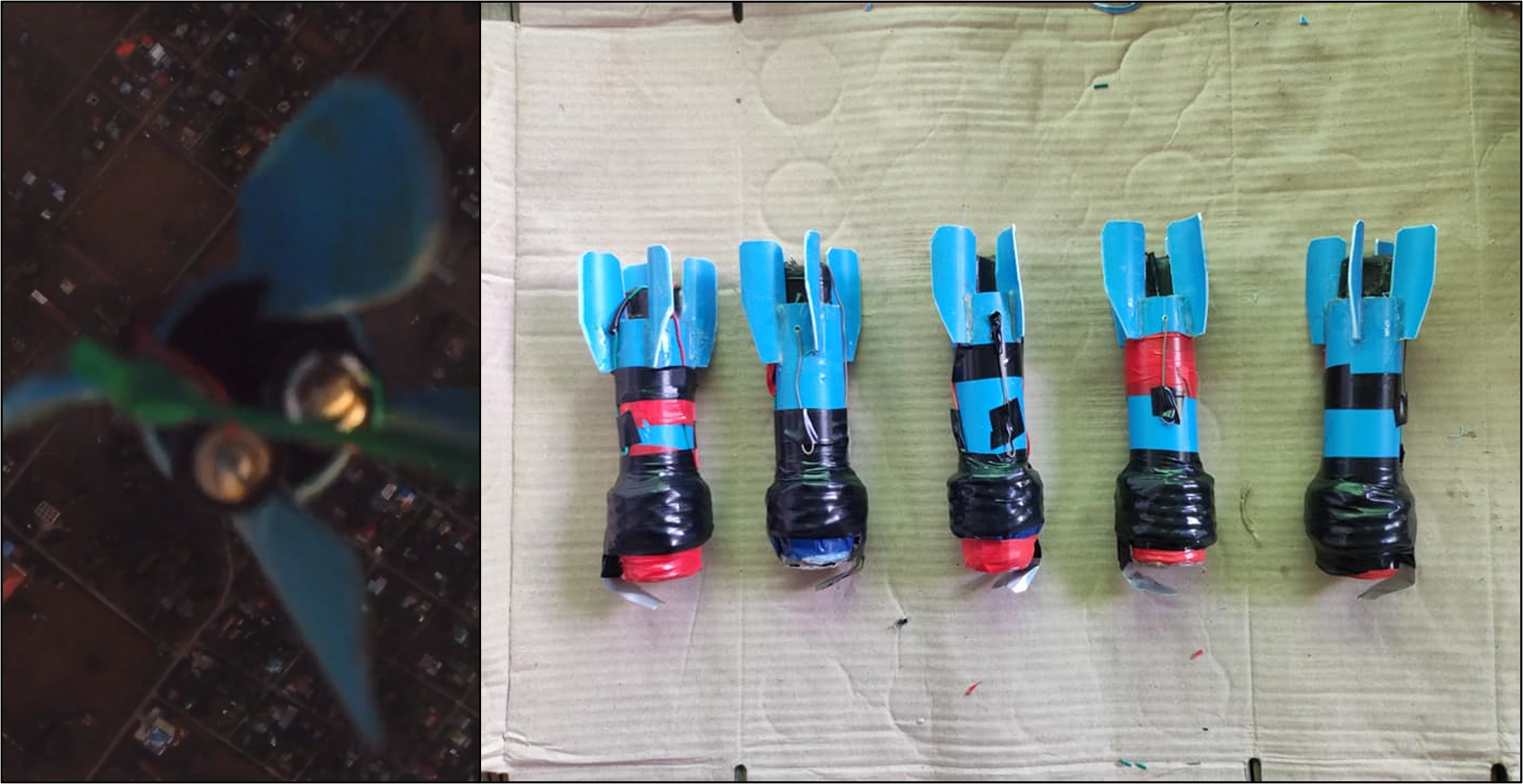 Photos of munitions posted to the KGZ Facebook page.

While electric initiation mechanisms, such as electric contacts attached to opposing arms of a clothes peg, have been used by other armed groups to initiate IEDs, this seems a poor choice for a drone bomb. The passing wind could either detonate this kind of munition in flight, or bend it out of alignment so it does not detonate at all. This may be why the KGZ video does not show any explosion.

Despite appearing to be more of a novelty rather than a fearsome weapon, bombs, even small ones, dropped by recreational drones can be very effective despite being unguided. This was most aptly demonstrated by the Islamic State which carried out hundreds of such drone attacks in 2017. Notably, these attacks disrupted Iraqi troops during the Mosul offensive, with Islamic State utilising their makeshift air force to drop custom-made drone bomblets onto a multitude of targets, including vehicles and infantry, to deadly effect. Although vastly different organisations to the Islamic State, it appears some anti-coup groups have been experimenting with similar tactics.

Yet the use of these weapons, and the means by which their deployment has been communicated, also speaks to another purpose.

According to Richard Horsey, an advisor on Myanmar to the International Crisis Group (ICG), footage of this kind can be a powerful tool in the information battle too. He noted that these videos have gone viral on Facebook in Myanmar, allowing anti-coup groups to demonstrate their capabilities and provide hope to their followers.

While such devices can have an impact on the battlefield, as already demonstrated in other conflicts, they are not going to win the war, Horsey said. But they can boost morale and encourage viewers sympathetic with the aims of these groups to provide money that may let them purchase more drones or weapons.