Since the outbreak of the conflict in Ethiopia’s Tigray Region, there have been reports on the possible use of drones by the ENDF, or the Ethiopian National Defence Force. Opponents of the government claimed that the Ethiopian military operated armed drones from an airbase in neighbouring Eritrea, a claim which Bellingcat addressed in a previous article in 2020.

For some time, the only firm open source evidence of drone use by the Ethiopian government has been of small unarmed Chinese commercial drones operated by the country’s police, which were subsequently used by the military.

As the conflict dragged on, Ethiopian military figures broadly acknowledged some use of drones. “Our air force is equipped with modern drones. We have our own technicians and controllers who run and fly them. We don’t need others to help us out with this in our fight against the extremists. We’re pretty self-reliant”, remarked Major General Yilma Merdasa of the Ethiopian Air Force in an interview to local media last November.

The View from the Runway

On August 3, photos began to appear on social media showing the Ethiopian Prime Minister Abiy Ahmed at an airport accompanied by Ethiopian military officers. In images posted on Facebook and Twitter we see the Prime Minister with Temesgen Tiruneh, head of the National Intelligence and Security Service (in a blue jacket) walking away from the tarmac.

Although it has not been possible to establish precisely who took this set of images, they first appeared that same morning on several Facebook pages strongly supportive of the government, including Ethio Times and Kiyya Hararghe. The images were also later published on the Facebook page of Voice of America’s Oromo service, a major language in Ethiopia. 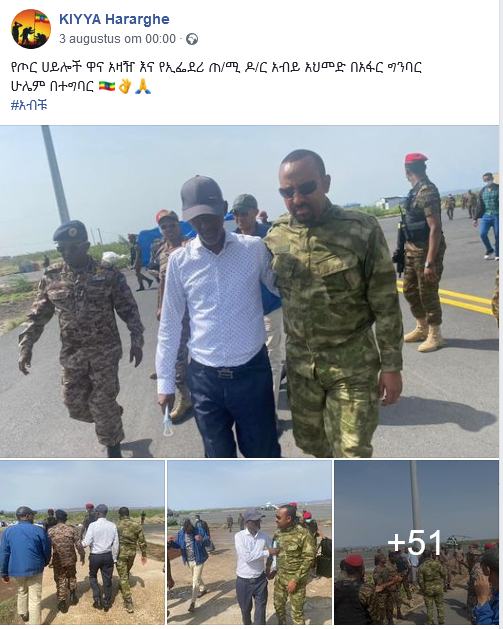 Bellingcat and open source researchers such as flight tracker expert @Gerjon_ were able to independently geolocate these photos to Semara Airport (11.791731, 40.991712). 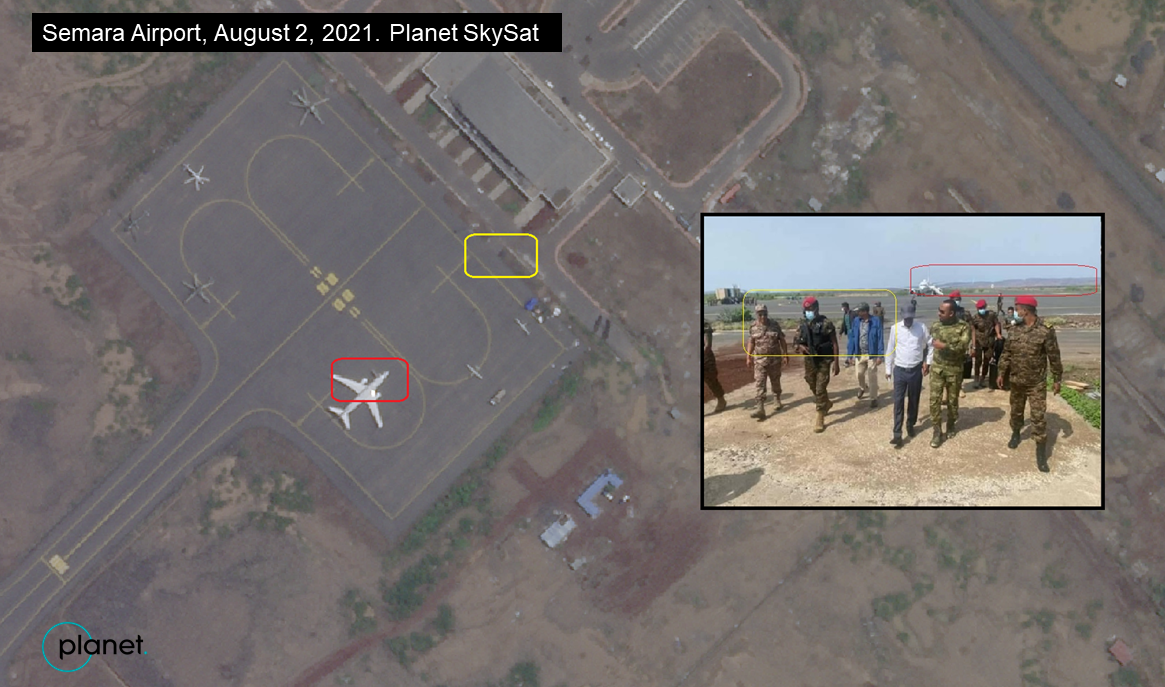 In the background of one image, behind the Prime Minister, a Ground Control Station (GCS) can be seen — this facility contains systems for controlling drones. An aircraft can be seen next to the GCS which deserves closer attention. Could this be a drone, and if so, what type? 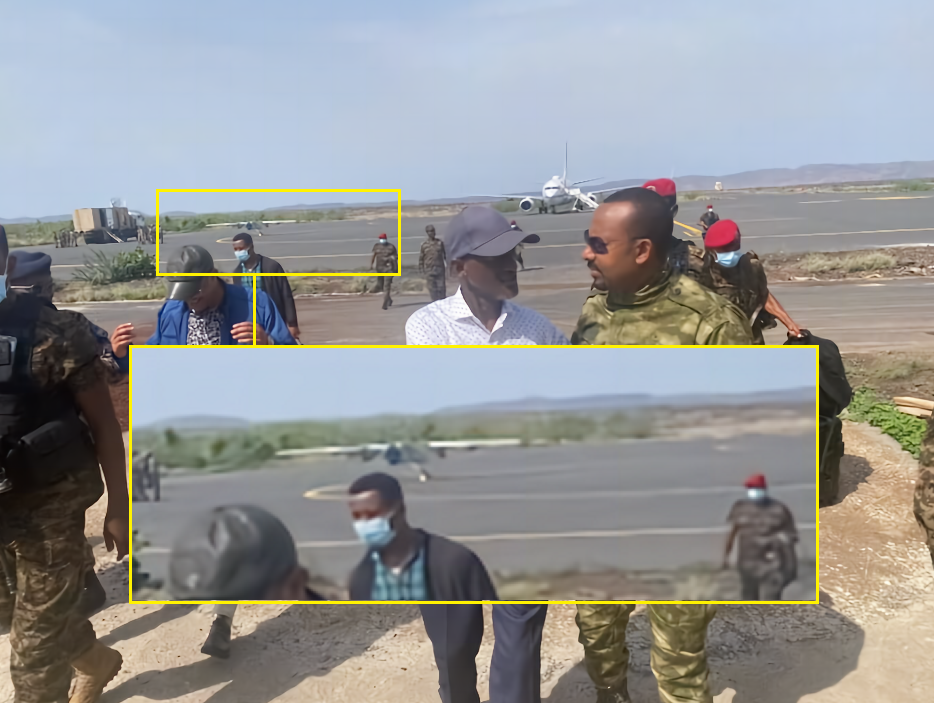 One of the images included in the Facebook post provides a glimpse inside the GCS. It shows a video feed from a camera, often seen as part of Intelligence, Surveillance and Reconnaissance (ISR) pods on drones. In short, this is the view which a drone operator at a military base would see on their computer screen. 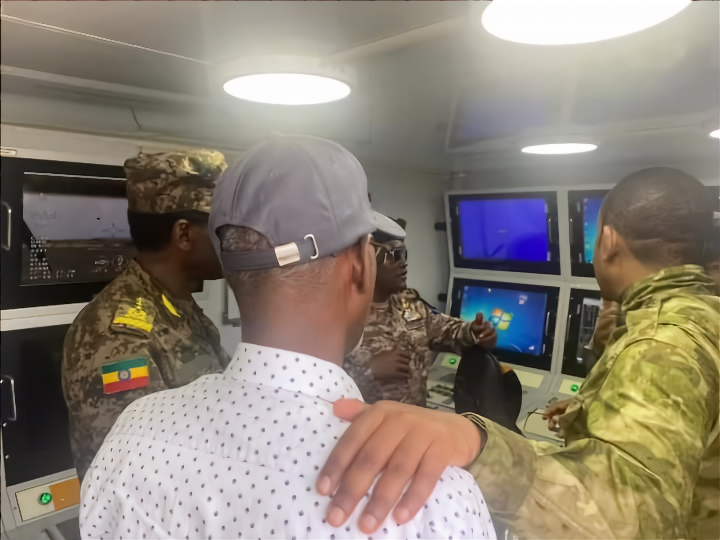 We can see the similarities ourselves by watching drone feed footage broadcast in 2019 on an Iranian news channel and uploaded to the video sharing website Aparat. Various measurements, such as the latitude-longitude meter, are arranged in exactly the same way on the screen. The same distinct crosshair can also be seen in both images.

These commonalities suggest that both drones use a similar Intelligence, Surveillance, Target Acquisition and Reconnaissance (ISTAR) software.

The image below compares the Iranian drone feed from 2019 to the screen seen inside the Ethiopian GCS:

The aforementioned features of some Iranian drone feed footage appear to have remained consistent since 2019. For example, in May 2021 a video published by Iranian TV and shared on Youtube shows the Iranian military operating Mohajer-6 drones with a clear sight of the drone feed. 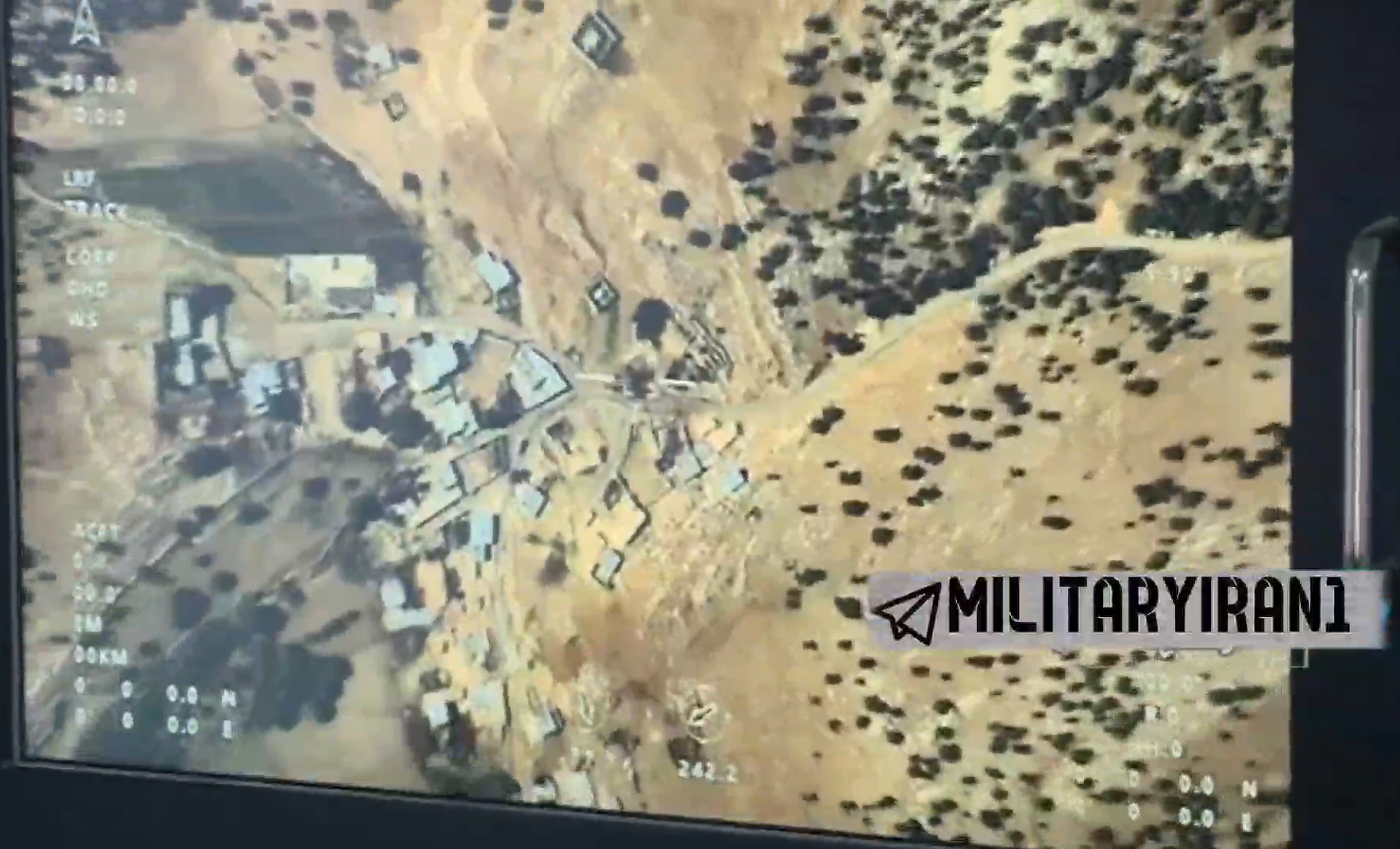 Bellingcat checked the drone feed seen at Semara against other publicly available drone feed footage for Chinese, Turkish, Iranian and US drones, but found no other close match. While this does not conclusively rule out other configurations, it makes it more likely that the elements seen on the screen are those of a specific software feed for the Mohajer-6.

The View From Above

Bellingcat obtained high-resolution 0.5m imagery from Planet SkySat of Semara Airport on August 2, 2021 — a day before the photos of PM Abiy Ahmed’s visit were taken. The image below includes more clues to the identity of the aircraft:

We see two aircraft and the ground control station nearby. A Boeing 737-700 stands on the tarmac a little further away; its position corresponds to that of the Ethiopian government jet which brought the Prime Minister to Semara, all also visible in the photos published on Facebook.

As the GCS can be used for operating drones, it is reasonable to suspect that the aircraft nearby could well be drones.

The measurement of the aircraft in satellite imagery shows that these two aircraft have a wingspan of 10 metres, and a length of six metres. This helps eliminate some possible drone candidates that have recently appeared in various conflicts, such as the Chinese Wing Loong II and the CH-4 and CH-5, or the Turkish Bayraktar TB-2. All of these have longer wingspans.

We also obtained a MAXAR WorldView-3 high-res 0.8m resolution image of Semara on August 5, courtesy of European Space Imaging. However, atmospheric conditions limit the use of this image. It is a little blurrier, which complicates a clearer view of the shape of the drones.

By this time, the 737 has already left. However, we still see what are likely to be two drones at Semara airport, including the GCS on the tarmac. One of the two drones has been moved closer to the main airport building. 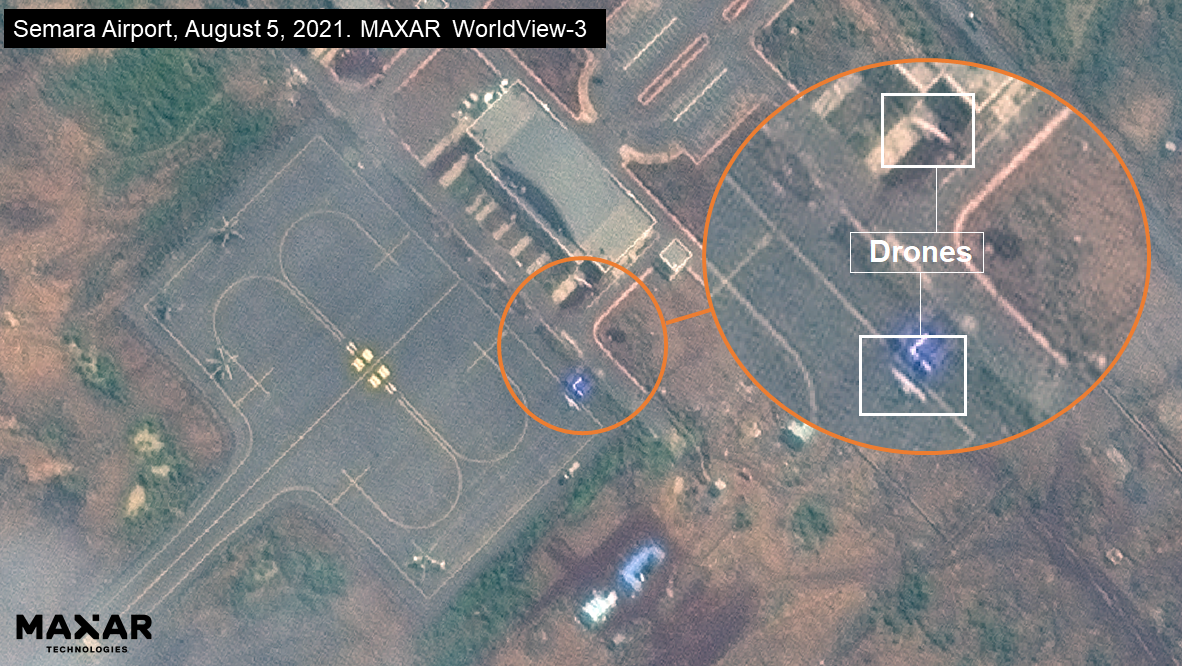 As noted earlier, the wing measurements from satellite imagery did not match those of several Chinese drone types known to be used in conflict zones. However, that alone did not rule out all Chinese manufactured drones — an important stage in verification, considering previous confirmed use of Chinese drones in Ethiopia’s police operations. Furthermore, the precise shape on the satellite imagery wasn’t clear enough to determine the exact model, leaving more questions open.

With those wing measurements in mind, let’s return to the photos showing PM Abiy Ahmed at the airfield. A closer look at photos from the extensive Facebook album of the PM’s visit to Semara showed the outline of a drone that fitted the shape of an Iranian Mohajer-6.

The image below shows the two drones in the background. We have used an image enhancement service in an attempt to produce a clearer image of the drones. 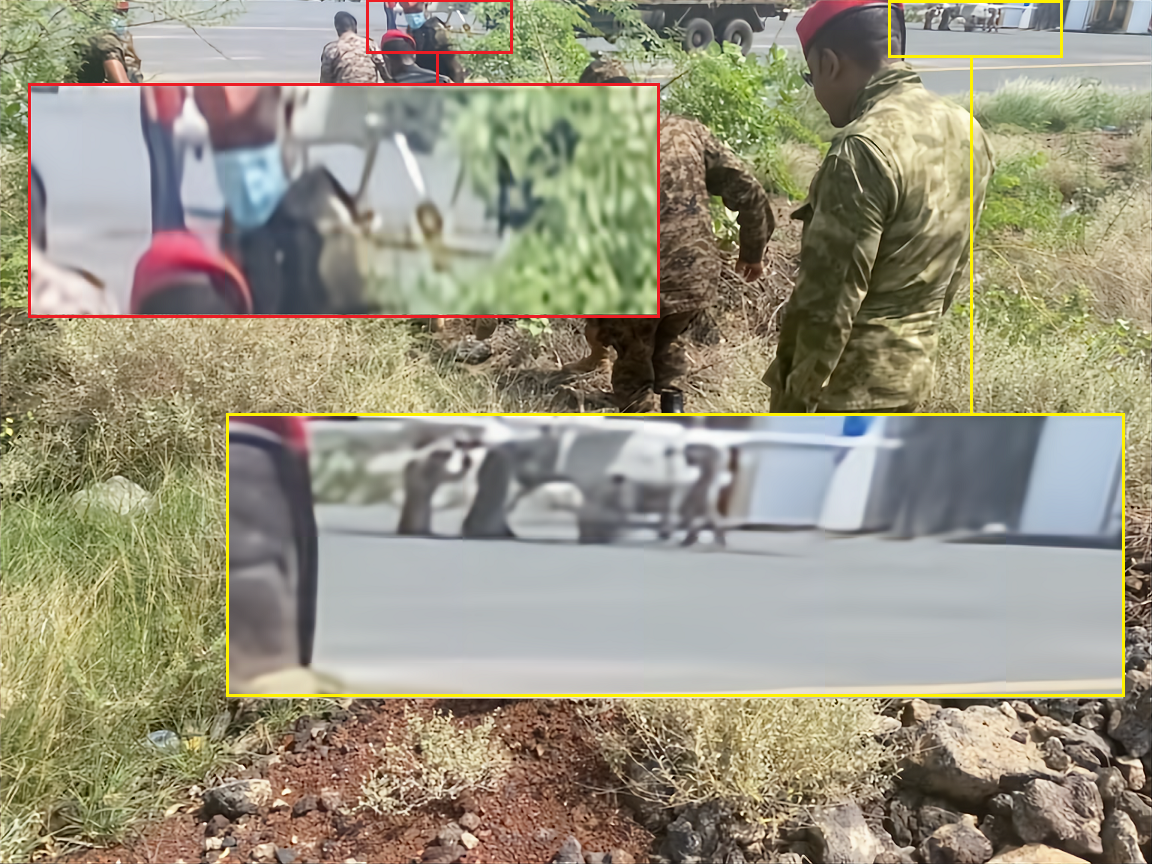 A closer look reveals further similarities between the landing gear and shape of this drone and those of the Iranian Mohajer-6.

On the drone to the right, two different images from the aforementioned Facebook photo album show the various parts of the drones in the background. Once aligned, we can see the tailfin of the drone and begin to have a composite image (given that both drones appear to be identical).

In the blue box in the top zoomed in image, we see a possible missile shape under the drone, which will be discussed later. These specific designs are outlined in the zoomed in images below: the curved flare nose, landing gear, the measurements and the wingspan are unique features for a Mohajer-6, providing more indications that this could indeed be a drone of Iranian origin. 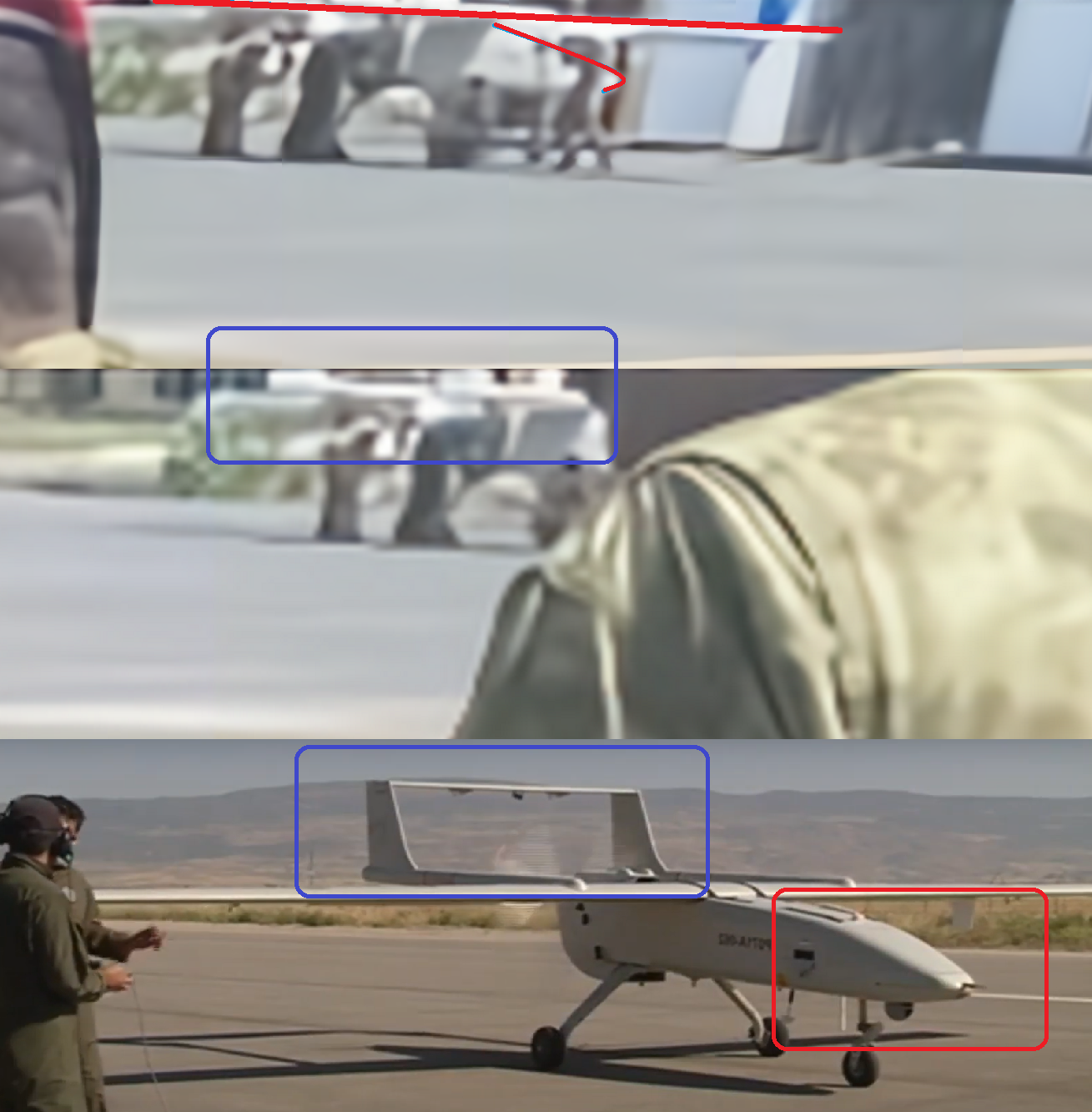 As far as Bellingcat was able to establish by the time of publication, there are currently no other drones with these specific measurements and shape which fit this profile. Once again, although certain Chinese (GAIC Yaoying II/ Air-Sniper-2) and Turkish (Karayel) manufactured drones have similar measurements, none were as close a match with the Facebook imagery of the drone shared above. 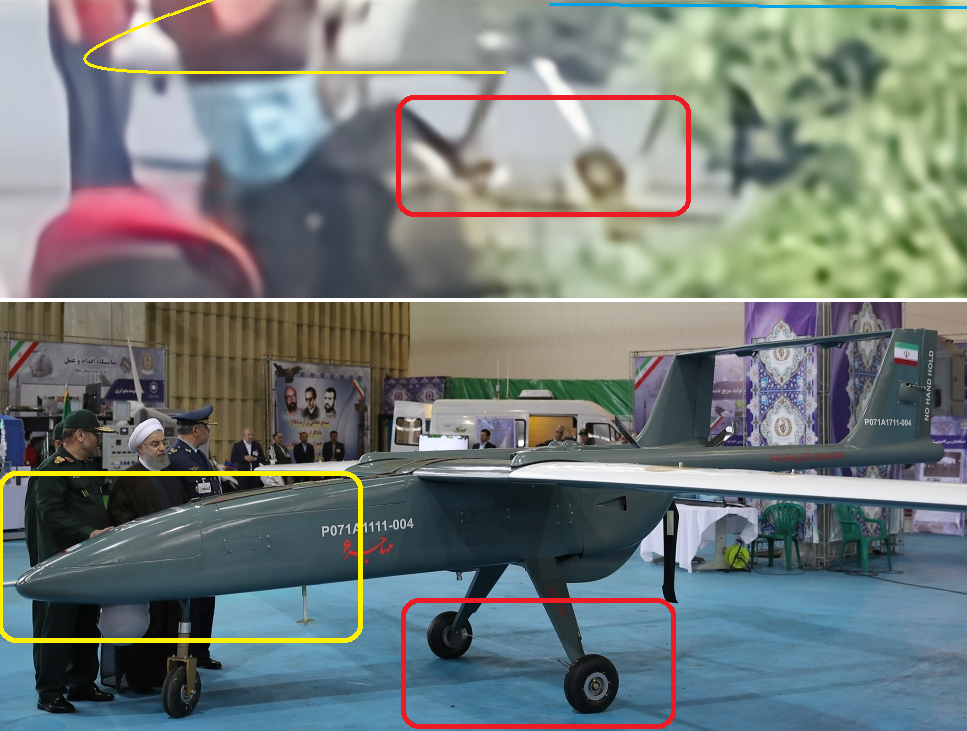 Lower image from IRIB via The Defense Post. It is published here solely for comparative purposes.

As there are ongoing concerns over civilian casualties from airstrikes in Ethiopia, it’s important to check if the Mohajer-6 is armed.

Imagery from Iran, as well as media reports, indicate that the Mohajer-6 can indeed be armed with various missiles and bombs. One of these is the Qaem air-t0-surface missile. 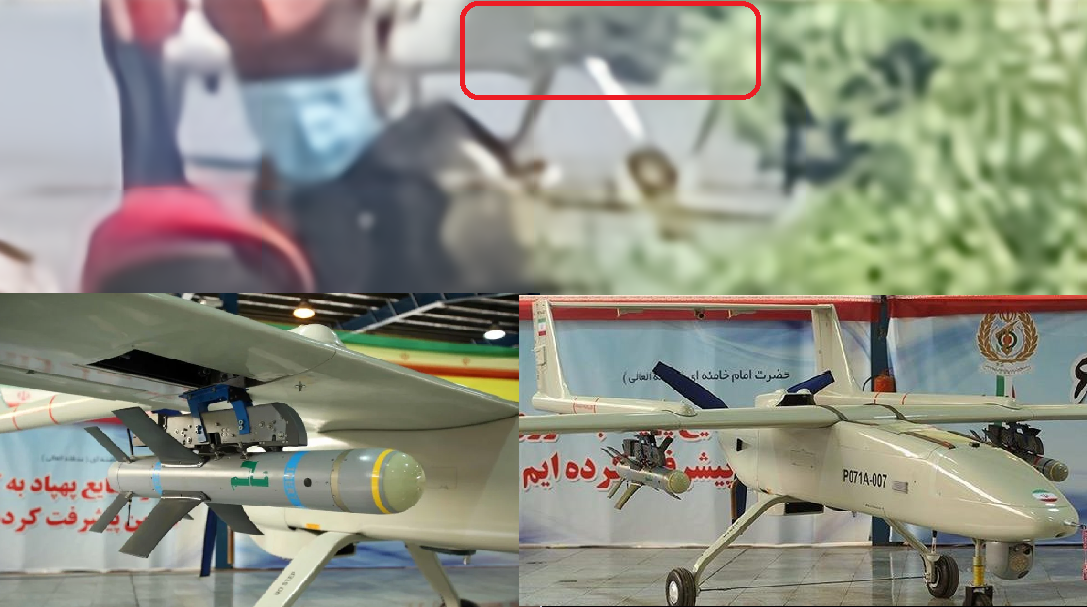 The photographs analysed indicate that the drone model seen at Semara has various points where weapons can be equipped. One of these drones appears to be armed with a missile.

In recent weeks, further claims about Iranian-made missiles in Ethiopia have been aired online.

On August 13, one analyst alleged a match between missile remnants in Ethiopia’s Tigray Region and the Qaem missile. Bellingcat was unable to independently verify the accuracy of his comparison.

Finally, debris recovered from an alleged dronestrike conducted in #Tigray matches the reverse conical part at the rear of #Iran's Qaem smart munitions known to be used on the Mohajer-6. Note the presence of perforations where the Qaem's rear facing antennae are mounted. 4/4 pic.twitter.com/enLLfqbepJ

What can be said on the basis of satellite imagery and photos posted on social media is that two drones were based at Semara Airport. An analysis of the shape and measurements of these drones, as well as the footage from the drone feed, provides a strong indication that these are drones consistent with the Iranian Mohajer-6, seemingly armed with air-to-ground missiles. Nevertheless, it must be stressed that higher quality imagery would be needed to state anything conclusively.

Meanwhile, the conflict over Ethiopia’s Tigray Region grinds on. Despite a recent ceasefire, it has now spilled over into neighbouring regions, with grave humanitarian consequences for civilians.