Did Drones Attack Maduro in Caracas?

This article was written in collaboration with Giancarlo Fiorella, who runs the In Venezuela Blog and Twitter account, and the Bellingcat Investigation Team.

On the 4th August, President Maduro of Venezuela gave a speech in Caracas, celebrating the 81st anniversary of the National Guard. However, Maduro never finished this speech, as part-way through two explosions rocked the area. He was quickly hustled off stage by his security detail. Claims rapidly spread on social media that the event had been targeted by drone-borne IEDs (DBIED), which were later supported by official statements by the Venezuelan government. However, these claims were disputed by firefighters, who claimed the explosions were caused by a propane tank inside an apartment. Images of a fire in a flat and an initial lack of images or videos showing any drones appeared to support the firefighter’s version of events.

However, images and videos consistent with what appeared to be a drone attack started to emerge the next day. Footage of a drone falling out the sky next to the apartment which would later catch fire, and another of a drone exploding with force in mid-air, appear to support the Venezuelan government’s version of events.

This article will collect, verify and assess the open source information associated with this event, and draw conclusions about what happened based on this information.

Initial footage from this event was limited to a video showing Maduro giving his speech, and did not appear to show either drones or explosions. However, the audio to these videos include the sound of what seems to be two separate explosions, and dignitaries, including Maduro himself, clearly reacting to some kind of unexpected event.

Video 1 is official footage of Maduro’s speech from Venezolana de Television, a state-owned television network. In it, we can clearly see and hear the dignitaries on stage reacting to what sounds like an explosion at 0009. This event seems to be unexpected, as the dignitaries appear to react with surprise. Indeed, after the apparent explosion the camera view switches to the military parade, which scatters in disarray at 0031. Due to the audio switching at 0010, it is not possible to hear any other sound clearly.

Video 2 is footage of the speech filmed by Ruptly, and focuses on the stage throughout. Like in Video 1, we clearly see the dignitaries reacting to an explosion at 0003. This explosion appears to be powerful enough to visibly shake the camera that is filming. We then see Maduro’s security detail rush onto stage and protect him with what are presumably protective mats. At 0017 we then hear what sounds like a muffled second explosion, to which the dignitaries also react, looking towards its source. During this video Maduro’s face is visible, and it displays what appears to be genuine surprise and confusion at the unfolding events.

Video 3 shows the above videos synced together in time with each other. We can see that the parade flees as Maduro is rushed off stage by his security detail.

None of the videos above showed either explosions or drones. Claims from firefighters that a gas canister explosion caused a fire in a nearby flat appeared to be a likely early narrative, despite government claims that there had been an attack using two small drones. However, new footage later became available which showed a drone exploding, and another drone tumbling out of the sky immediately next to the location of the alleged kitchen fire.

Video 4 (Courtesy of Caracas News 24) depicts a drone with six rotors hovering while Maduro’s speech can be heard in the background. At 0007 the drone appears to explode with some force, and the cameraman flinches, removing the explosion from shot.

Using a frame-by-frame analysis we can geolocate this video to very near the area where Maduro was speaking. Structures seen within Video 4 appear to match the street lights seen lining Av Bolívar on which the parade took place. Note that the camera captures these lights both front-on and side-on: there are a limited number of locations on Av Bolívar where this is possible. (Comparison image) 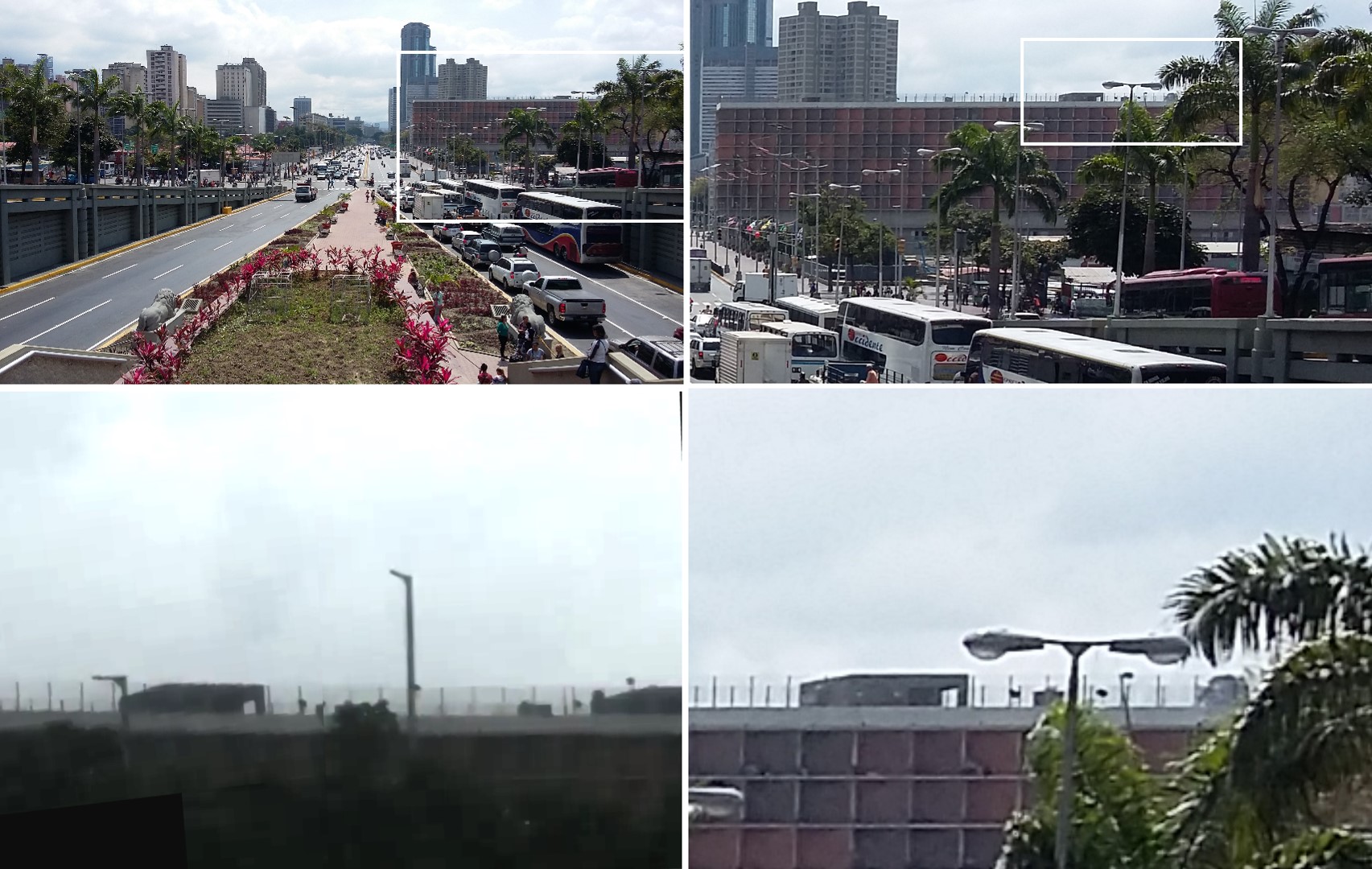 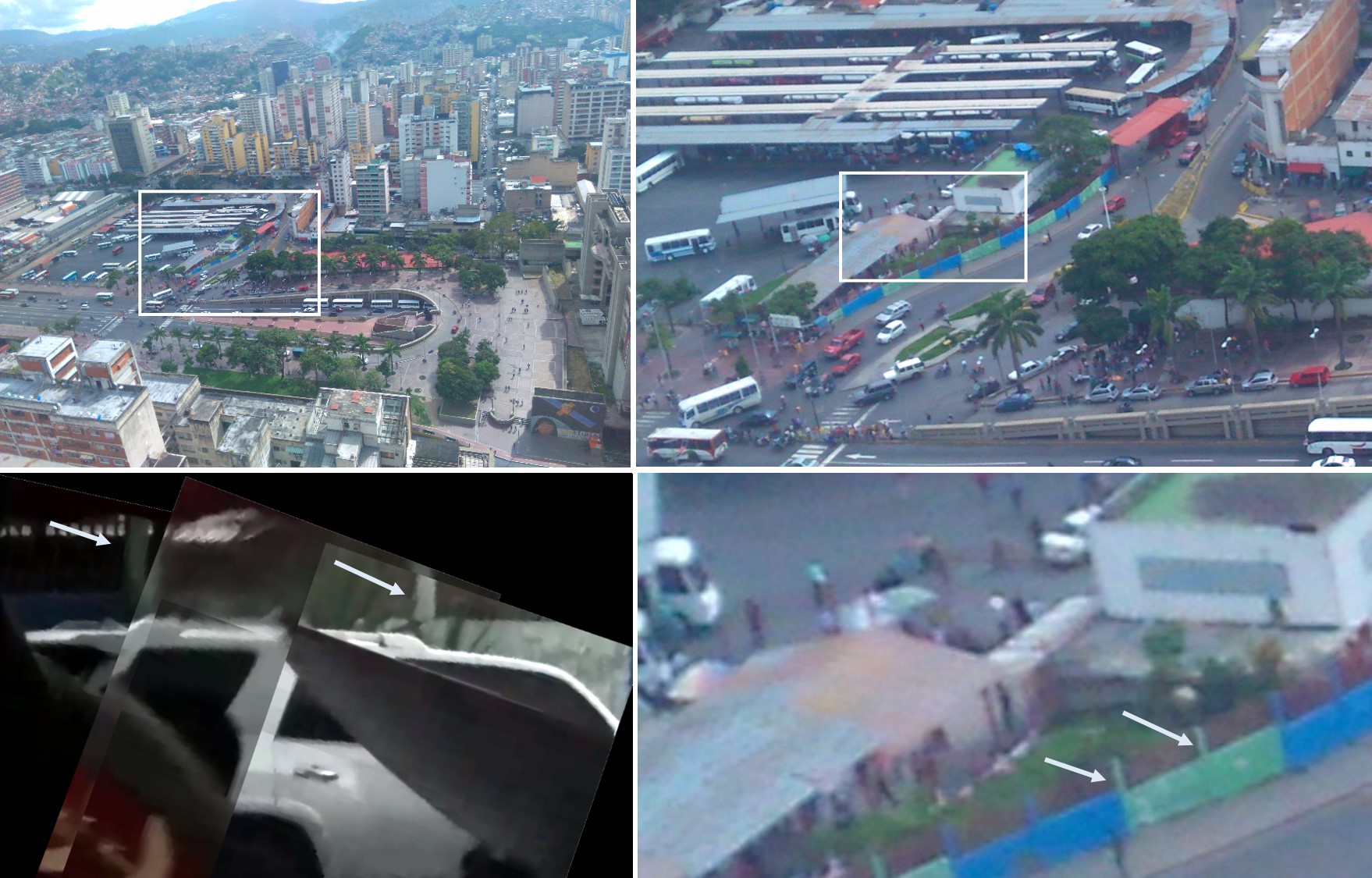 Here we see that a fence briefly seen in the Video 4, apparently quite close to the camera, appears to match a fence just to the South of Av Bolívar. Note the alternating colours of the pillars and walls. (Comparison image)

Examining the unique features of each of these video stills, it appears that the camera is most likely located at the extreme West end of Av Bolívar, just to the South of the road. The yellow shaded box represents the most likely location from which Video 4 was filmed.

Examining the soundtrack of Video 4, we can match the sounds with the other videos of Maduro’s speech, showing that it matches in all respects – see Video 5 below.

Video 6 (Courtesy of Adriana Rabascall) shows a drone with six rotors apparently losing control and falling to the ground. No explosion is seen or heard. Vitally however, it is possible to geolocate this video to the same location as the fire in the apartment, which firefighters had claimed was caused by a gas canister explosion. Images taken of this location during the fire also show a hole in the wall of the apartment in the vicinity of where the drone would have crashed. Comparison of Video 6 with location of fire. Note the small hole below the window through which the fire is visible. (Courtesy of @isaA740919) 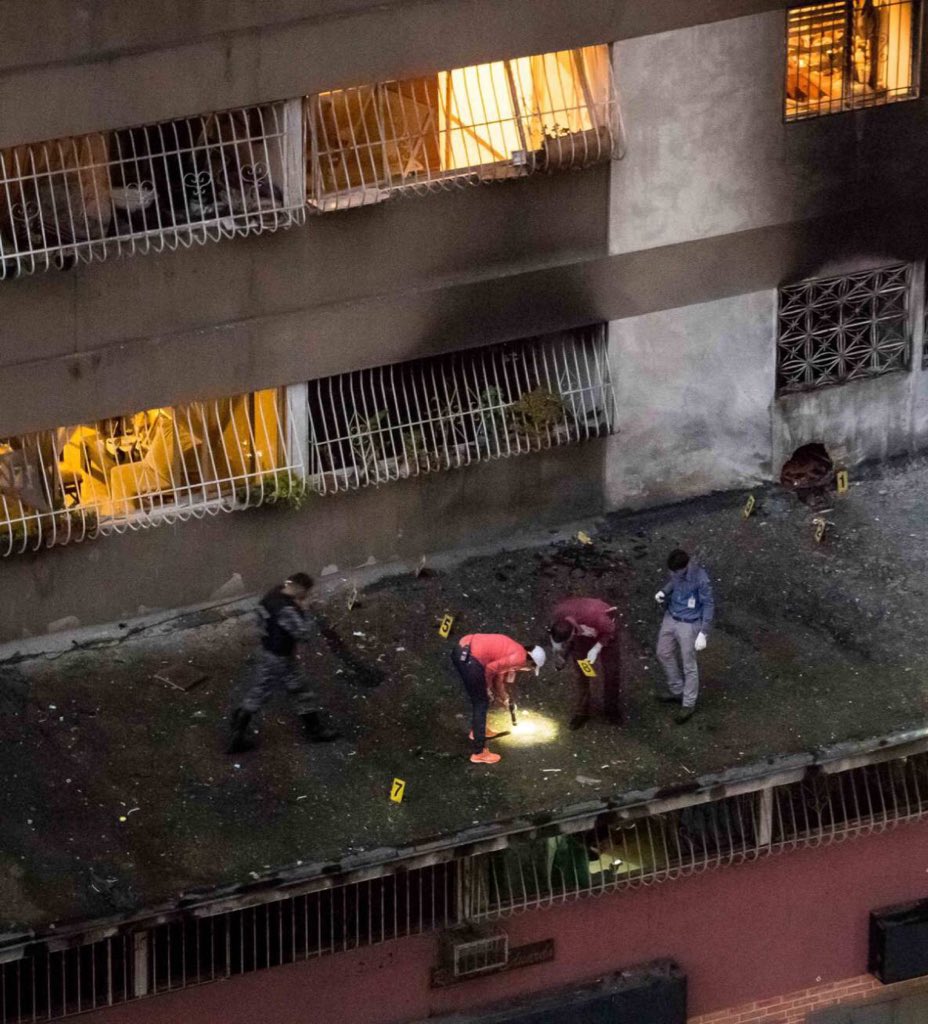 Image showing the building after the fire has died out. Note the hole in the wall to the right of the image. (Courtesy of José Gavira)

From these images we can see that this drone crashed at the same location at which a fire was reported. We can also see that there is a distinct and neat hole in the wall of the apartment that caught fire. It is a very likely possibility that the downed drone subsequently detonated, creating the hole in the wall of this apartment, igniting a fire, and causing the sound of the second explosion which can be heard in Video 2. 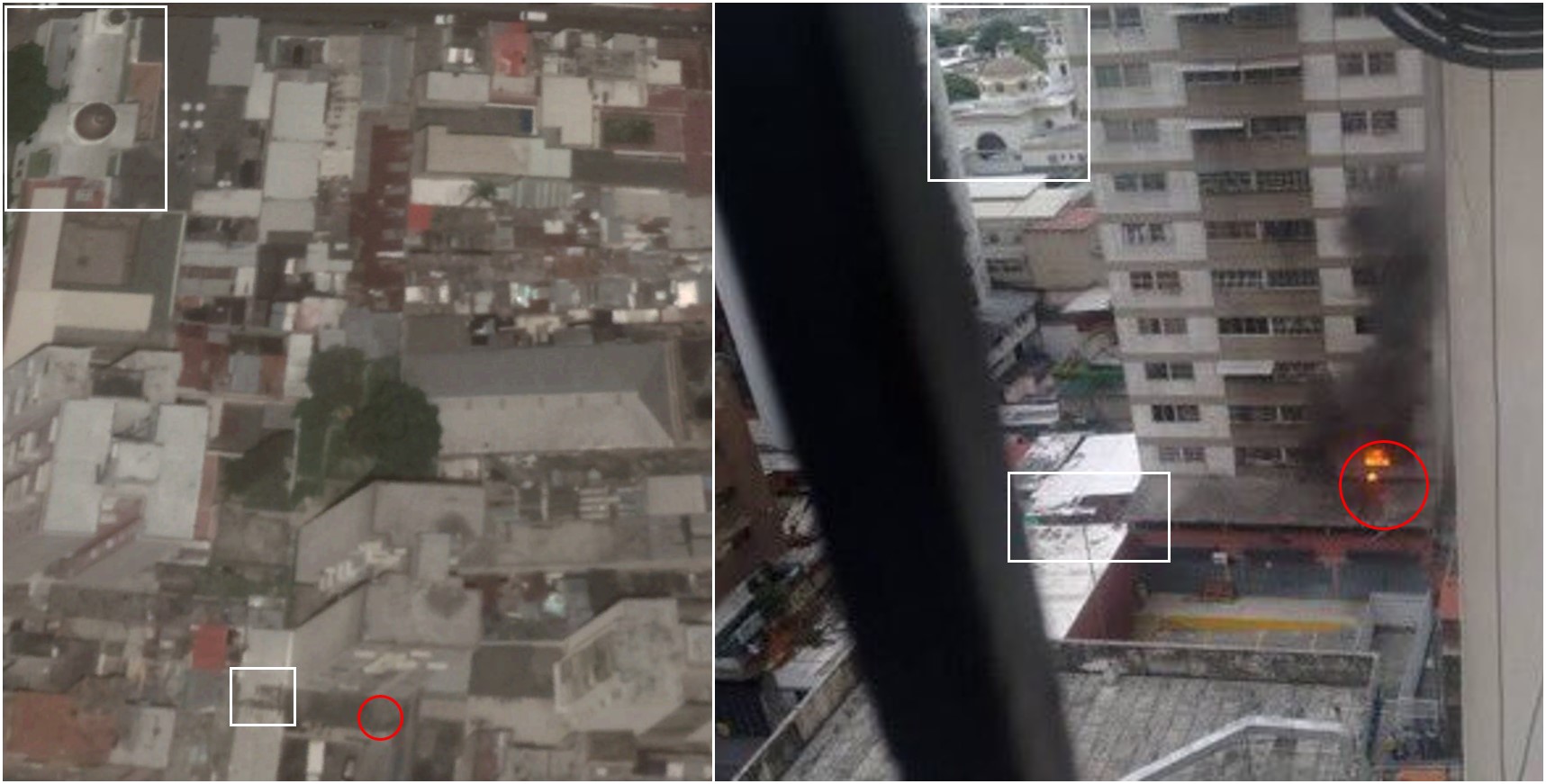 In the geolocation above, we can see that the drone crashed at a location 400m from the main stage. This would likely explain why the second explosion was so muffled compared to the first.

What drones were used?

The drones seen in this event each have six rotors, and though it is not possible to make out much detail on the drone which exploded in midair, several important features are visible on the drone which crashed. These features support the Venezuelan government claims that the drones were DJI Matrice 600s, although it does appear the drones have had their legs removed.

It should be noted that DJI Matrice 600s may have less than the three GPS antenna marked here in blue. (Courtesy of Adriana Rabascall and DJI)

In a press conference following the event, Minister of the Interior, Justice and Peace Nestor Reverol said that the drones were controlled by attackers located on streets “adjacent” to the presidential stand, and that each of them carried “approximately 1 kilo of C4” explosive. Reverol also claimed that the attack was thwarted by “special techniques and [radio] signal inhibitors”, which “disoriented” the drone that detonated closest to the presidential stand. This is certainly a capability the Venezuelan security services are reported to have. The other drone, Reverol explain, “lost control” and crashed into a nearby residential building, detonating at the height of the first floor. He also claimed that one of those arrested was involved in the assault of the Paramacay Fort last year near Valencia, Carabobo state.  It is not currently possible to verify or contest these claims using open source information.

Following the event, one group appears to have indicated knowledge of the attack: “Soldados de Franelas”. The name translates into “T-Shirt Soldiers” after a prefered method of hiding one’s identity at a protest by wrapping a t-shirt around one’s head, covering the face. The practice is widely used in Venezuela by anti-government protesters, and dates back to before the Chávez era. The account, which was created in March 2014 and has 98,000 followers, regularly tweets anti-government messages.

On August 4, 27 minutes after the event, @SoldadoDFranela tweeted “Time’s up”:

The account then Tweeted three messages, all with identical text stating:

“The operation was to fly 2 drones carrying C4 the objective was the presidential stand, snipers with the honour guard shot down the drones before they could reach their objective. We demonstrated that they are vulnerable, [we did not] achieve [our goal] but it’s a matter of time.”

Two Tweets contained widely-circulated videos that captured the moment of the explosions, and the third, seen below, contained two images taken at the site following the explosions: However, it is not clear from any of the group’s messages that they are unequivocally claiming responsibility for the event. The group’s tweets, along with a written message shared on social media by a Venezuelan journalist,  are written in the passive voice, and allude to the event from a distance, rather than clearly claim its authorship. The group’s claim that the drones were shot down by snipers does not appear to be supported by the open source information available.

From the open sources of information available, it appears that an attack took place using two DBIEDs while Maduro was giving a speech. Both the drones appear visually similar to DJI Matrice 600s, with at least one displaying features that are consistent with this model. These drones appear to have been loaded with explosive and flown towards the parade.

This event constitutes the most vulnerable that Maduro has ever appeared in public. As the head of an authoritarian government, Maduro has cultivated an image of himself as a strong, commanding leader, backed by the “monolithic unity” of the National Bolivarian Armed Forces. During the attack, Maduro and his entourage appeared confused and afraid. Even after the explosion, Maduro briefly attempted to continue with his speech even as he was swarmed by his security detail.

Since the event, the Maduro government has arrested at least six individuals whom it claims were involved in carrying out the drone attacks, and claims to know the identities of everyone else involved. Security forces have also conducted raid in a Caracas hotel located some 600 meters from where Maduro’s presidential stand was located on Saturday, suggesting that the operation was staged from this location. The authorities conducted another raid at a second hotel in Caracas, and arrested an unknown number of people there.