With the conflict in Syria soon to enter its fifth year, large parts of the country have been laid to waste by intense fighting, bombardment and shelling. Understandably, most of the focus has been on the fighting and the direct victims of armed violence, with rather less on other impacts and their consequences, particularly the environmental damage and pollution caused by the conflict.

Environmental damage can take many shapes and forms, from attacks on industrial facilities, critical infrastructure and the resulting releases of hazardous substances, to the looting of factories and laboratories, to the collapse of environmental governance, and the toxic footprint of weapon and munitions residues. In November 2015, PAX released the report Amidst the debris…, which provides a snapshot of the environmental hazards associated with the Syrian conflict. The research was guided by the assessments by the United Nations Environmental Programme (UNEP) and others of previous conflicts (Afghanistan, Lebanon, Iraq, Kosovo, Serbia ,Gaza, Ukraine) their environmental impacts, and associated public health risks.

The lack of field access to Syria for obvious security reasons severely limits the ability to undertake the thorough assessment of environmental hazards necessary to verify potential health risks. But with the current mass use of a range of communication technologies, including social media, Open Source Intelligence (OSINT) can be a useful tool for environmental impact mapping. For the PAX Syria report, we made use of various OSINT tools. This article will go into more depth on how these tools can be a useful means for monitoring live conflicts for non-governmental organisations, international organisations and humanitarian workers providing aid in affected areas.

The main sources of potential pollution during armed conflicts are usually heavy industrial sites and critical infrastructure that, when damaged, could result in major chemical releases. Loss of power can also lead to releases. Therefore, a useful starting point is to identify vulnerable locations associated with such sites. Prior to the war, Syria was investing heavily in building up their industrial base, mainly the pharmaceutical, textile and biotechnology sectors. The government set up websites specifically to promote the industrial areas, for Sheik Najjar (PDF) near Aleppo, for Hassiya near Homs, for Adra  near Damascus and for Deir az Zor (using Internet Archive).

Other important tools that we used to locate industrial sites were Wikimapia and Openstreetmap. These feature user-driven location data from for all kinds of sites, from military to industrial, to agricultural and recreational. The oil and gas industries were fairly well documented, which helps in identifying oil fields, pumping stations and processing sites.

Based on environmental assessment reports written by consultants for the European Union, and on a report to the UN by the Syrian government on environmental developments made prior to the war, we had a fair idea for where to look, and what to look for.

Satellite and open source information are the main remote identification tools available for locating damage in areas to which one does not have access. Projects undertaken by the American Association for the Advancement of Science (AAAS) under its Remote Sensing for Human Rights project are an interesting example of how satellite analysis can help build up evidence, for example on human rights violations and border conflicts.

One useful tool are the Damage Assessment Maps (DAMS) released by the the UN’s Operational Satellite Application Programme (UNOSAT), along with GIS .shape files that can be imported in ArcGIS or the opensource free version, QGIS. Both programmes have the option to use open source satellite data like Bing or Google Maps, and if combined with the .shape file DAMS, these maps provide a decent overview of the impacted areas. Combining these with the data on industrial sites from the sources mentioned above, such as Wikimapia, the picture slowly emerges of where impacts have occurred and where likely environmental hotspots can be located. Local visual confirmation and data collection would be needed to verify this information. Clearly it is important to ensure that the information found is correct but this form of remote identification could be an initial step towards determining areas for priority interventions.

As with others, we have found the well-established mobile network very useful for monitoring what has been going on in Syria. The large number of people using smart phones, and the intense use of social media by the different warring parties that have been uploading their progress and their use of weapons throughout the last four years, has been an important source of environmental data. Nevertheless, there are a number of challenges and pitfalls with using social media that have to be taken into account, for example in verifying the sources, locations and authenticity of the footage. Some useful information on verification can be found here and here, as well as in the Visual Verification Guide by First Draft.

The primary tools we used for monitoring environmental impacts were YouTube, Facebook, Liveleak and Twitter, where most of the groups or their followers had their own accounts and uploaded videos and images. As many locations and groups have social media accounts associated with them, it was possible to review these accounts for images and videos related to relevant attacks. In addition to this, searches in English and Arabic for the aforementioned industrial sites, and for words like ‘factory’ and ‘industrial site’, resulted in a number of videos documenting these attacks.

For example, a large cement factory in the southern part of Aleppo, near a water treatment centre and oil storage sites, was attacked by rebel groups in April 2014. The groups claimed that they hit an ammunition storage site. Cement factories use heat to process minerals such as silicon and mix it with aluminium, lead and other materials. Such sites usually hold large volumes of fuel for these processes, in addition to storing toxic waste products. 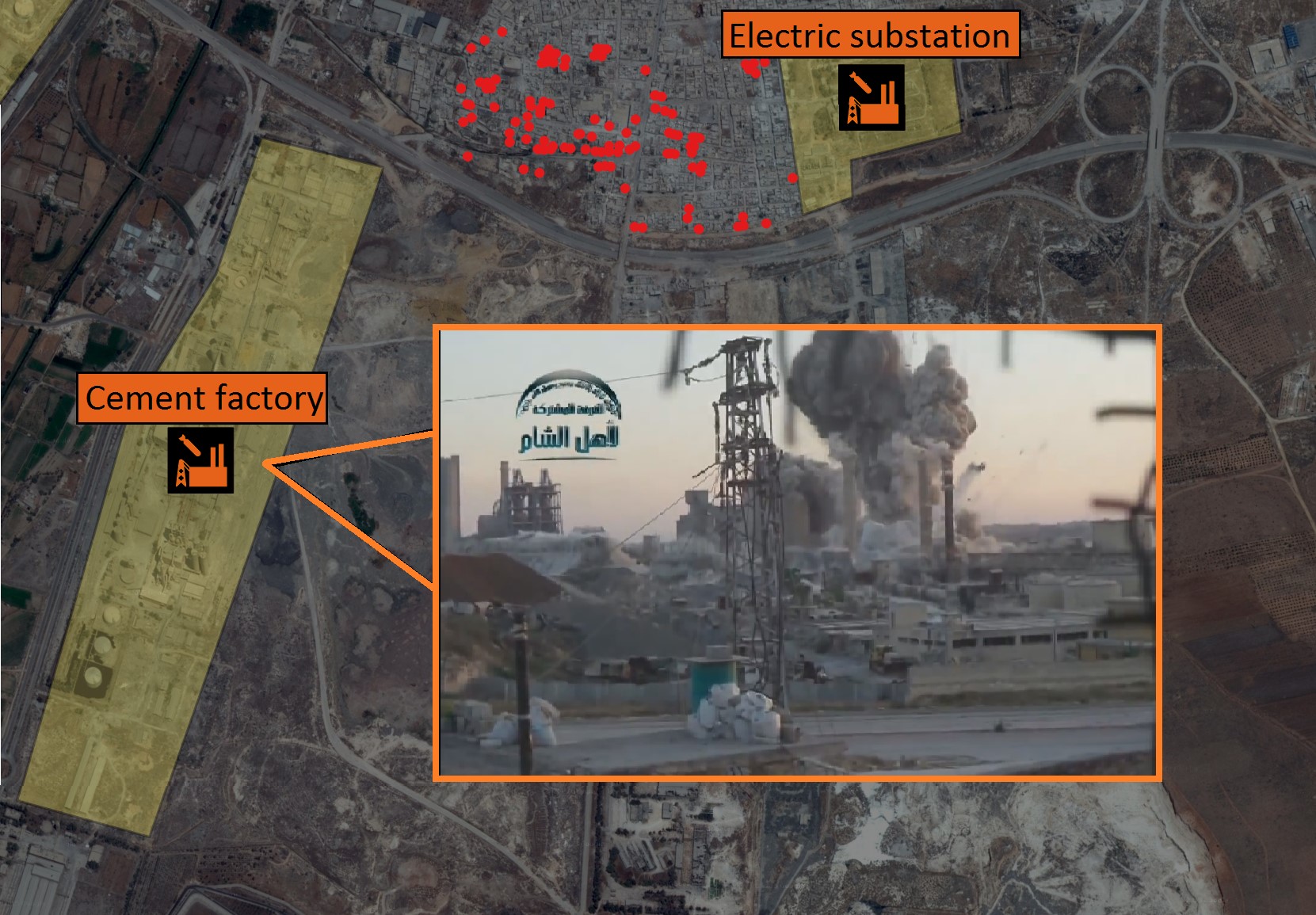 It was possible to confirm the location of these images and videos by using a process known as geolocation. This is where structures and landmarks in the images are compared to satellite imagery and other reference images from the area to confirm the exact location where the images were recorded.

The search term ‘power plants’ yielded similar results to those described above, and helped identify attacks on power plants in the west of Syria. Power plants often contain large quantities of Polychlorinated biphenyls (PCBs), a known carcinogen, which when burned can create toxic dioxins. Several of these power plants have been severely damaged, with images showing fires at the plants. However, these are only single source reports, and additional confirmation should come from requesting satellite data from the dates on which the plants were alleged to have been attacked.

For attacks on oil and gas sites, locating them should be less difficult, using data released by the military, and news reports. Attacks carried out by US, British, French and Russian fighter jets and cruise-missiles have been documented by both the Pentagon and the Russian Ministry of Defence, although not all of the precise locations have been disclosed. Examples of Russian attacks on oil sites can be found here; or here for Russian attacks on water-treatment facilities. By using satellite data, these sites can be located even if the belligerent forces refrain from disclosing specific locations.

Overall, social media data collection can be an indicative tool that supports initial damage mapping for sites that can cause environmental contamination. While this information can be crucial in mapping conflict-related pollution, it should however be noted that there are also areas where severe pollution could have occurred but that have not been documented online, which can be partly obviated with remote sensing.

The scale of the environmental footprint of conventional munitions and weapons residues is still an area of debate. Nevertheless, peacetime problems with pollution from firing ranges could indicate that the intense use of munitions or the targeting of munitions storage and production sites could create local hotspots of contamination. Explosive substances like RDX, PBX, TNT and various forms of rocket fuels are known to be toxic, with health risks depending on length, intake and type of exposure.

Therefore, having an indication of areas of intense fighting and the type of weapons used can be useful for post-conflict assessment and testing for the presence of certain heavy metals and toxic energetic materials. Of particular interest are densely populated areas subject to intense weapon use, blasts at munitions depots and DIY munitions factories.

In a number of examples it was possible for Bellingcat researchers to find videos and images of attacks taking place, clearly showing the attacker, meaning it was possible to establish the likely munitions used. In other examples, unexploded munitions and the remains of munitions at the point of impact were present, allowing for identification of these munitions. Further research allowed for the type of fill used in many of the munitions identified to be established, as well as other relevant substances.

The process described above is far from perfect, but we wrote this blog to demonstrate what is possible with modern technologies to kick-start monitoring of conflicts. Ideally, there should be sufficient expertise and funding to real-time monitor conflicts as they are unfolding, and provide a baseline environmental assessment of available information. More robust verification measures are also needed to ensure the information found is correct, which would include multiple source verification and ideally, verification on the ground through sampling.

Moreover, those collecting data should also be aware of the potential security impact if the information in made public, and caution should prevail in the public dissemination of the data. Similarly, proper risk communication for these potential impacts is crucial to prevent misinformation spreading or instigating unsubstantiated fears and concerns among civilians. This type of work would ideally be carried out by professional organisations and should be included if such a process is started.

Stepping up monitoring and data collection on environmental hazards is important to increase the protection of civilians during and after conflict. Data collected during this period could be very useful for informing structured post-conflict environmental assessments, allowing hotspots to be identified, contained and dealt with, thus minimising civilian exposure and long-term environmental pollution.

To learn more about how improving the collection of data on wartime environmental damage could help increase accountability and minimise harm, see the recently published Environmental Mechanics from the Toxic Remnants of War Project.

When the guns will eventually fall silent, recovery operations will soon take place, and all relevant information is then needed to guide targeted identification, clean-up and remediation of environmental hotspots, be it part of broader humanitarian reconstruction work or targeted clean-up programs. Nonetheless, having all the relevant data at hand will speed up the socio-economical development, reduce humanitarian and financial cost and limit civilian harm.

More information on Syria and environmental impact can be found in these articles:

IPS News – Environment: a Silent Victim of the Syrian Conflict