Water is playing an increasingly important role in the Syrian Civil War. November 2015 witnessed at least two attacks on water facilities in the Aleppo and Deir ez-Zor Governorates.

This article looks into both claims using open sources to find out what we can and cannot know about these attacks. Both videos will be discussed separately, starting with Abū ‘Amr and followed by al-Khafsa. The article will end by placing the two attacks in the wider context of water in the Syrian Civil War. 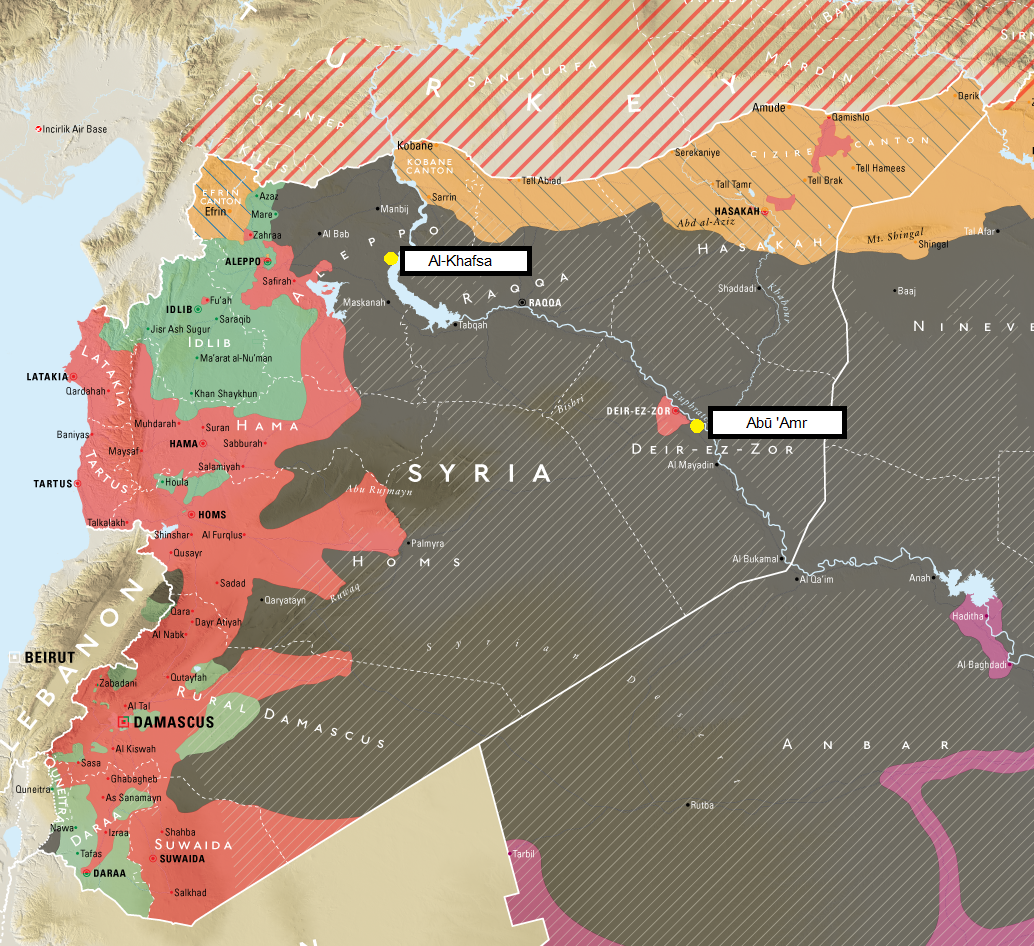 The locations of al-Kahfsa and Abū ‘Amr on a map that shows territorial control in Syria as of November 30, 2015. (Map via @LCarabinier)

On November 17, 2015, ʻAmāq News Agency published a 59-second video that claims to show the destruction caused by air strikes of the ‘airplanes of the international coalition’ (Arabic: طائرات التحالف الدولي) in a village called Abū ‘Amr (Arabic: البوعمر).

In the video, two men stand and talk in the vicinity of the facility. The first man in the video says that the coalition air force bombed the irrigation station of the third district, which provided water for fifteen thousand acres of land, as well as cattle and even birds. He claims the station is now completely out of service. The second man says it was the main water supply for five villages accounting for 100,000 people, accusing the international coalition of using scorched earth tactics.

The video was published on November, 17, 2015. The Syrian Observatory for Human Rights (SOHR) reported strikes in Abū ‘Amr on November 17, 2015. A day later, they mentioned that:

The second man in the video claims the bombs start falling during the call for ṣalāt al-subh, the first of the five daily prayers for practicing Muslims. Although it is hard to verify, the two sources point towards the early morning of November 17, 2015, just before 4:26 AM (taking into account the prayer times schedule for Deir ez-Zor).

A comparison between the video and satellite imagery makes it easy to verify the location as Abū ‘Amr, as that is the name Google Maps uses for the village. Geonames refers to the houses surrounding the water pumping station as Al ‘Abd (Arabic: العبد), which does falls under a greater area called Abū ‘Amr. For the sake of clarity, I will refer to the Abū ‘Amr water pumping station (Wikimapia labeled it as a ‘giant water pumping station’). 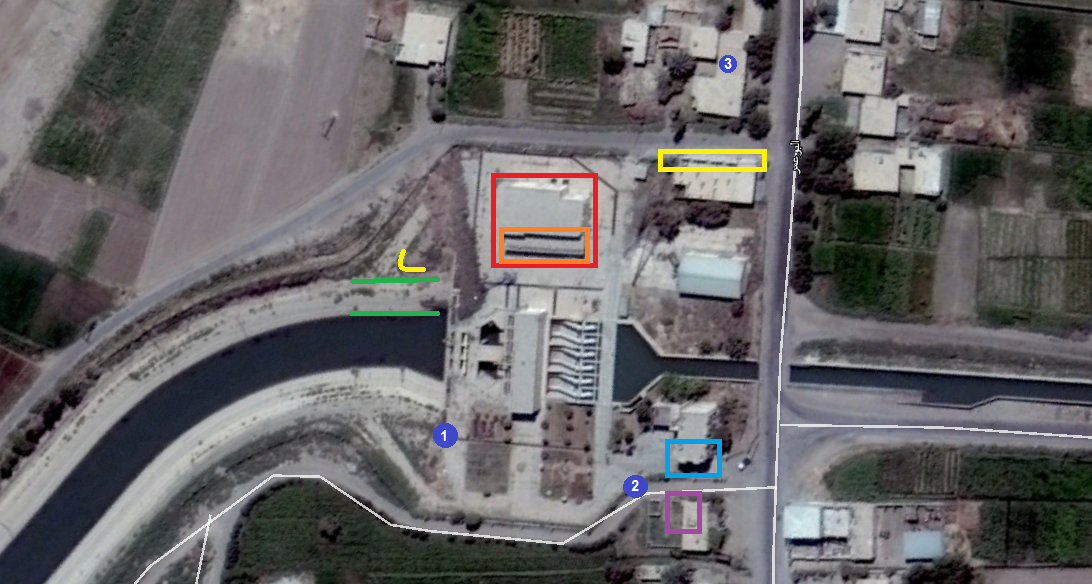 Overview of the water pumping station in Abū ‘Amr and the surrounding buildings and territory. (Satellite imagery via Google Maps) 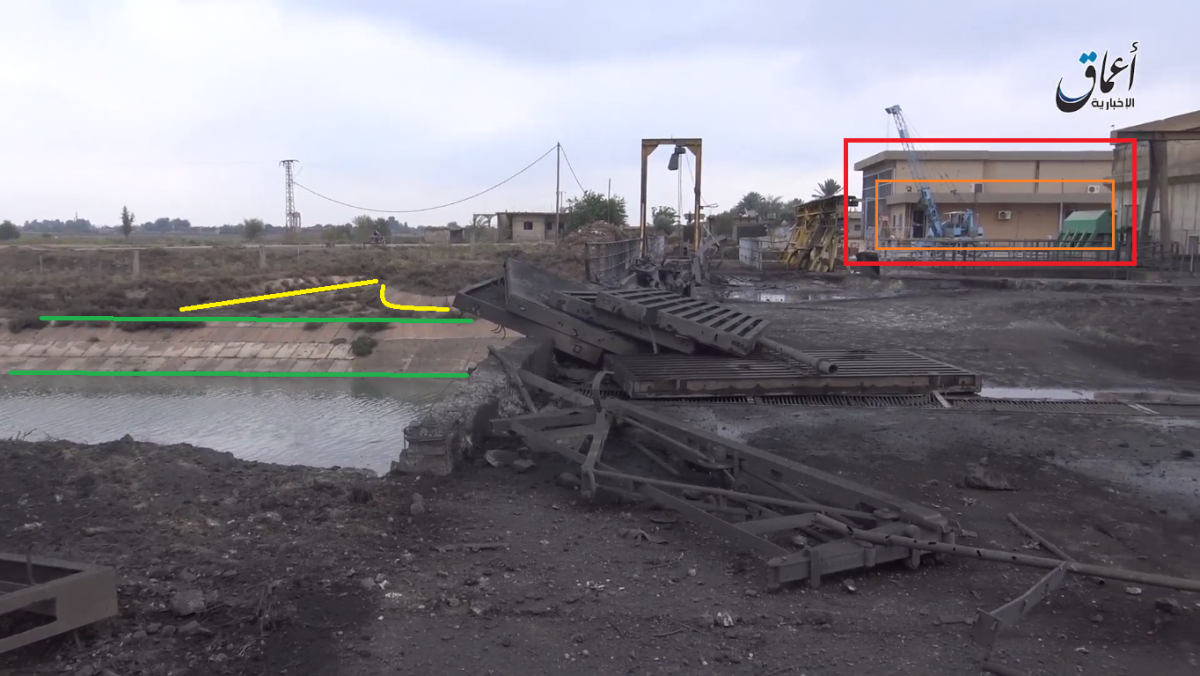 The first filming location showing part of the destruction at the water pumping station in Abū ‘Amr. 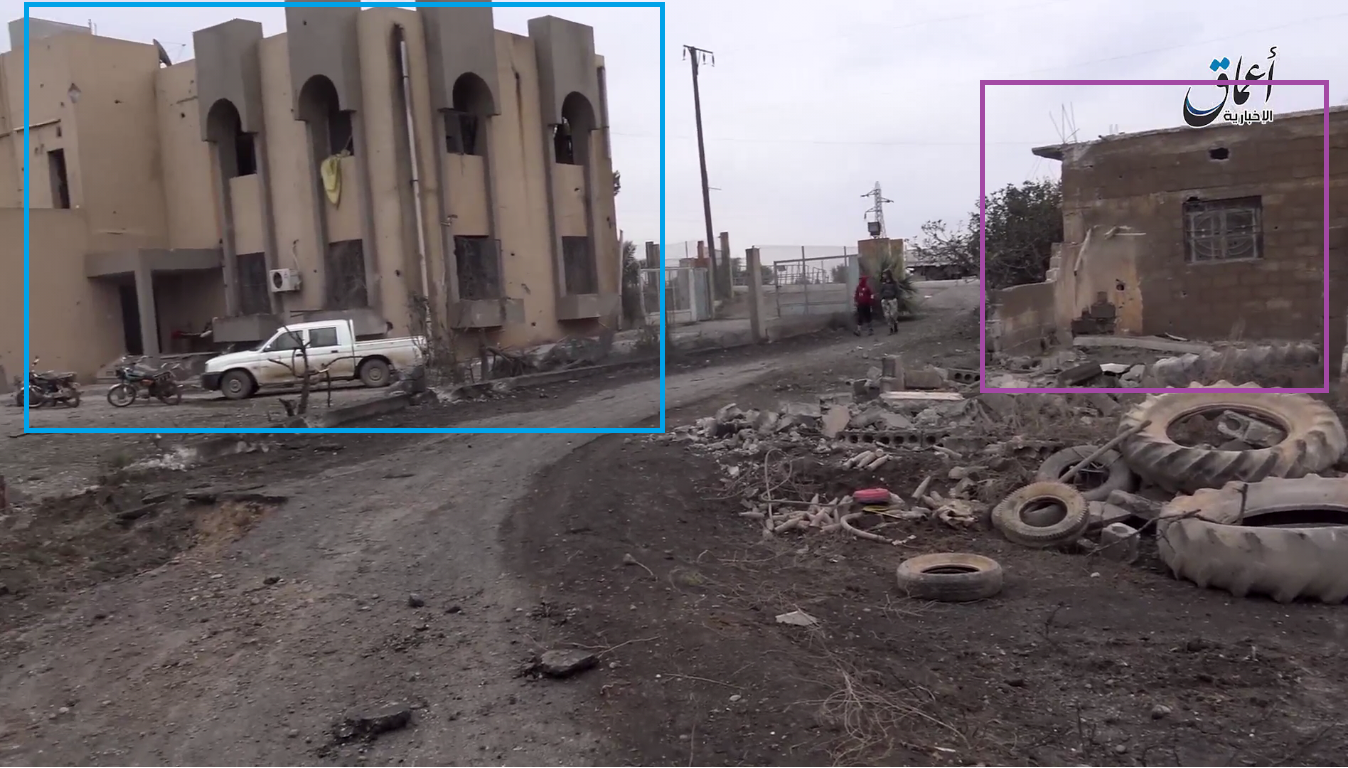 The second filming position showing a building on the premises of the water pumping station and a house in Abū ‘Amr. The house belongs to someone named Abdul Rashīd al-Khalīfa, according to information put on Wikimapia six years ago.

The third filming location is on top of a house, overseeing the water pumping station. The impact of the alleged missile is clearly visible in the roof, leaving a gaping hole. This house belongs or belonged to Hamoud al-Ibrahim Abu Ayyub or Ahmed Ibrahim, according to information a guest user added to Wikimapia six years ago. 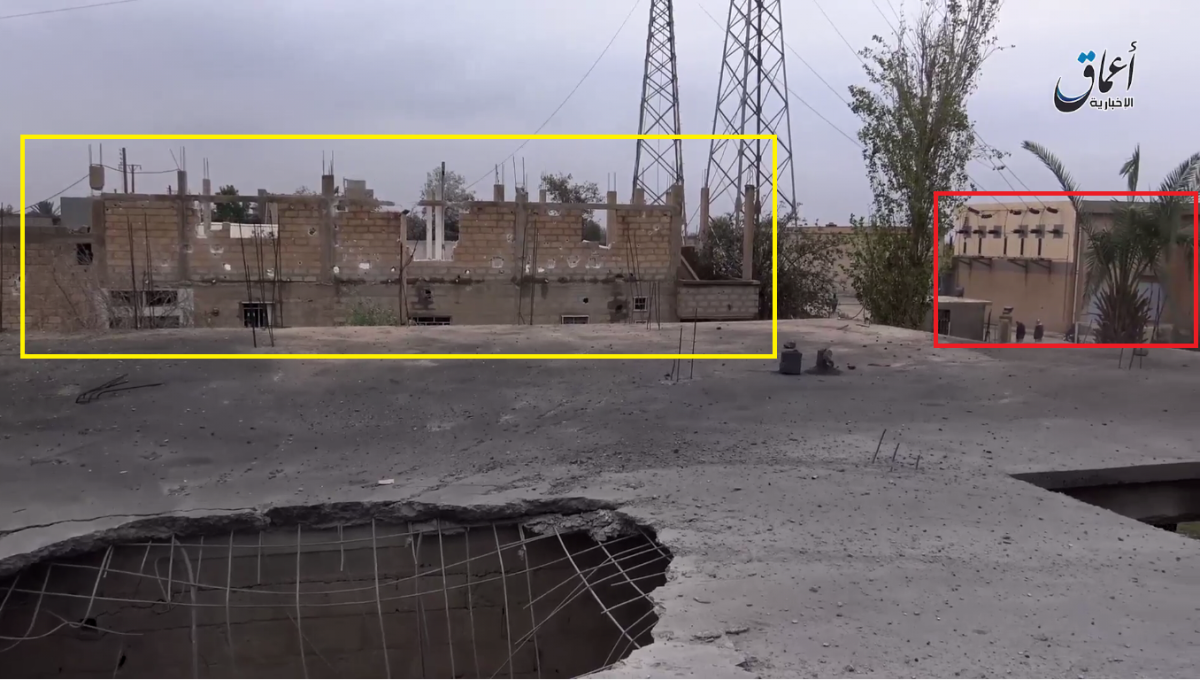 The third filming location is on top of a house next to the water pumping station in Abū ‘Amr.

Having only found this information so far, it can be established that there are at least two craters that resemble the impact of an air strike. The map below shows the craters in red and a possible crater in yellow. The red lines indicate damage, mostly scorched earth or concrete. No casualties have been reported.

The map below shows the craters in red and a possible crater in yellow. The red lines indicate damage, mostly scorched earth or concrete. (Satellite imagery via Google Maps)

The photos have an Islamic calendar time stamp: Safar 14, 1437, which corresponds with November 26. That is also the date when the photos were published on an IS-linked website. The Syrian Arab News Agency (SANA), which is linked to the Syrian Ministry of Information, reported strikes at Aleppo’s ‘water pumping stations’ on November 27. Two days later, Syrian newspaper Souriatna reported strikes on two water purification plants in al-Khafsa (online, p. 4). The ʻAmāq video has a December 1 timestamp at the beginning, which is the same day that UNICEF Representative in Syria, Hanaa Singer, issued a statement condemning the targeting of the al-Khafsa water treatment facility.

Thus, the strikes on the al-Khafsa were first reported by IS-linked websites on November 26, 2015. Both regime and opposition media followed in the days after. UNICEF’s condemnation followed a week later.

The video can be easily geolocated with the accompanying description. It was filmed on the compound of a water treatment facility six kilometres south of al-Khafsa (Arabic: الخفسة, also known as Khafsa Kabīr). The description of the location as a water treatment facility was added to Wikimapia seven years ago. Although it is not named named ‘the al-Khafsa facility’ explicitly, it is safe to assume that this is the facility the parties are talking about, as there is no other huge water treatment facility near al-Khafsa or in the Aleppo Governorate. Besides, the location can be confirmed by a document that can be found on the website of Hamburg Wasser, one of the companies responsible for the redesign of the transmission pipeline from Lake Assad to Aleppo.

A map showing the plans to redesign the transmission pipeline 4b from Lake Assad to the city of Aleppo. The project’s client was the General Establishment of Water Supply and Sewerage Establishment in Aleppo, financed by the German government-owned development bank KfW and executed by Dorsch Gruppe. 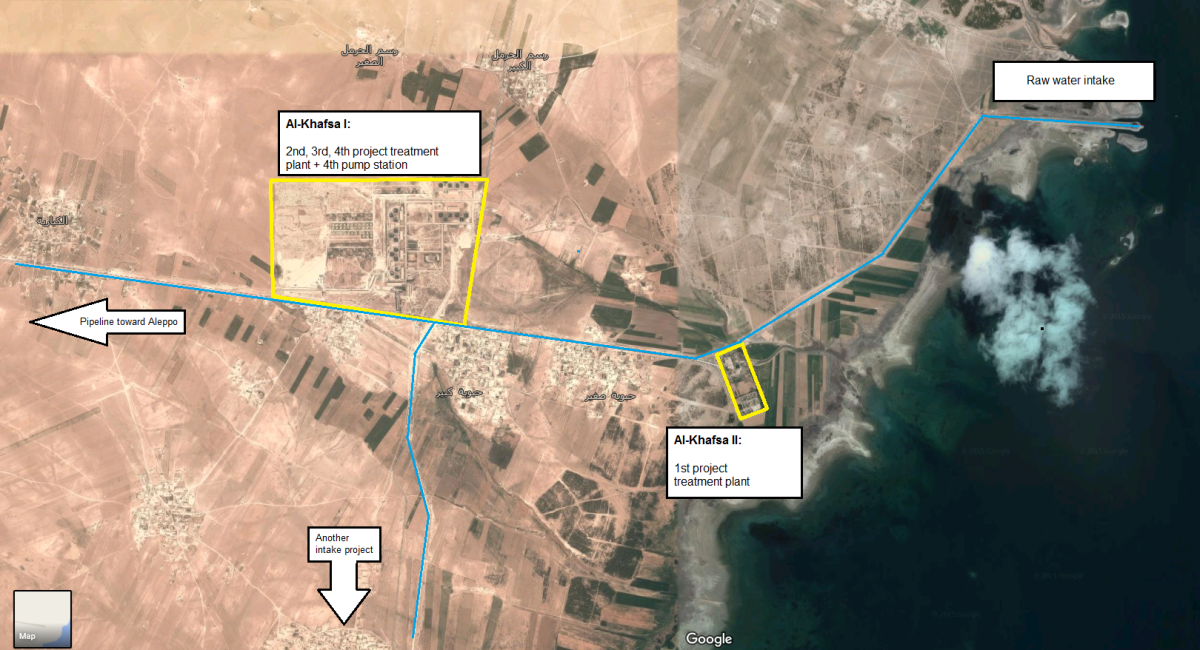 The left image shows a still of the Amāq News Agency video. The image on the right is a Google Maps screenshot that gives the exact location of the cameraman on the compound of the al-Khafsa water treatment plant.

IS had published photos of the working facilities in October of this year. Although the December 1 video only shows al-Khafsa I, the photos released in October show the al-Khafsa II facility. 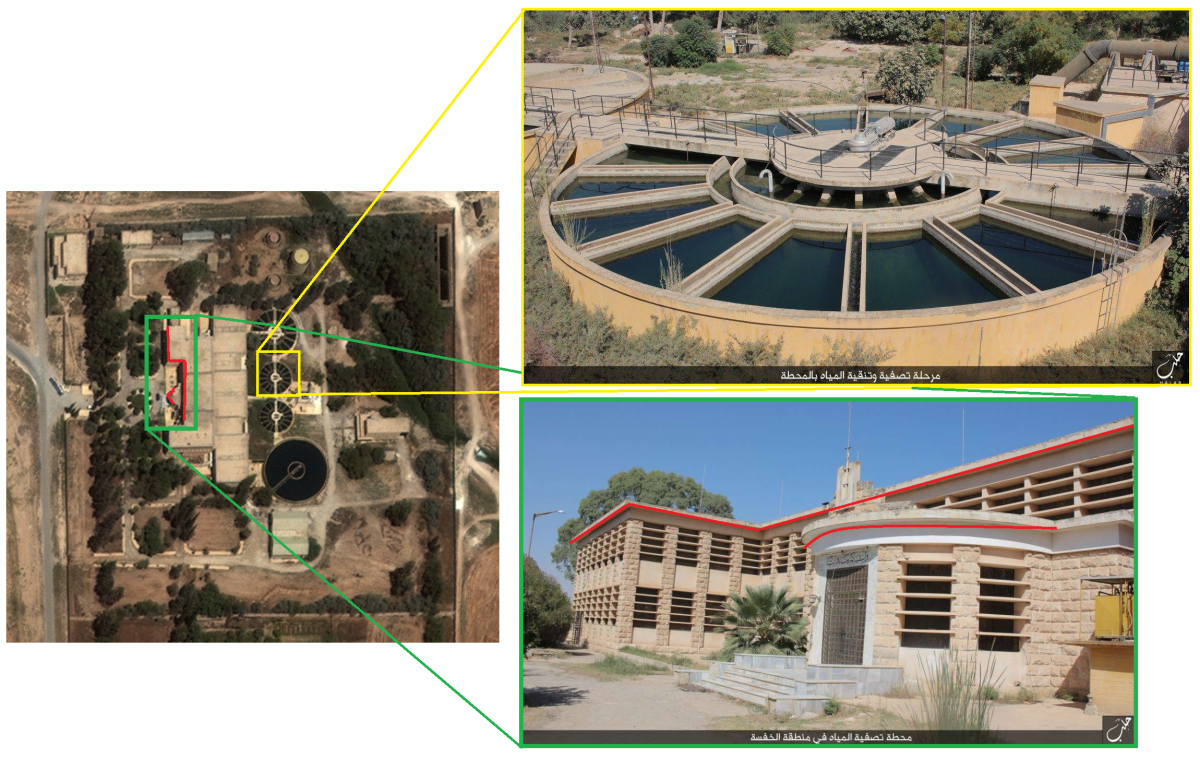 On December 2, 2015, the Russian Ministry of Defence (MoD) published the following video on Twitter and YouTube, claiming it is an ‘oil refinery’. This clearly shows the al-Khafsa II facility being targeted.

The left image is a still from the footage released by the Russian Ministry of Defence; the image on the right is Microsoft satellite imagery showing the same location. Coordinates: 36°10’37″N 38°2’30″E.

Based on the footage released by the Russian MoD as well as the IS-linked website, at least two locations of damage can be identified. It is not entirely clear which parts of the facility have been targeted. The ʻAmāq video shows destruction at one of the clarifiers at the larger al-Khafsa facility; the Russian MoD footage shows one strike on the smaller al-Khafsa facility, as can be seen on the map.

According to Hanaa Singer, the al-Khafsa facility is “one of the most important in Syria, producing an average of 18 million litres of drinking water daily”. She called upon “all parties to the conflict to end all attacks on water facilities, treatment systems, pipelines, infrastructure and personnel who repair water supply installations” in a statement released on December 1, 2015.

The al-Khafsa facilities have had trouble in the past (for example, see here and page 162 here) but were repaired shortly after. That seems to be the case now as well, as Aleppo-based journalist Zain Halabi told Syria Direct, “[r]egime engineers repaired the station under the auspices of the Red Crescent, as IS possesses neither the expertise nor the materials to do it themselves.” SANA also claimed that engineers of Aleppo Water Establishment would immediately start necessary measures to fix the damaged pumping stations.

SANA wrote on November 27, that the international coalition ‘targeted […] water pumping stations in al-Khafseh area […] causing them to go out of service.’ This report also appeared on Fars News Agency.

However, it is clear that at least the air strike(s) on al-Khafsa II was or were conducted by the Russian Air Force; they have released the footage themselves. The Russian MoD claims the facility is (or is used as) an ‘oil refinery’. It is evident, based on the satellite imagery and the document of the German companies that the purpose of these facilities was and is water treatment. That is not to say that any facility can be used for other purposes, for example artisan oil refining as some suggested, which can be done basically anywhere.

IS’ claims that it was Russian planes that struck the al-Khafsa I facility cannot be verified.

The Syrian Civil War has caused an “indescribable harm” to Syria’s water infrastructure, the Strategic Foresight Group writes in their November 2014 report “Water and Violence: Crisis of Survival in the Middle East“. The city of Aleppo has been hit especially hard due to the conflict, an August 2015 REACH report “Eastern Aleppo Household Assesment: Water Security” finds.

The Strategic Foresight Group report mentions that all warring factions have used and abused water-related facilities. This has also led to the contamination of soil, water, and air and the spread of diseases among the Syrian population. Here is a section of the report that gives an insight into the toll taken on Syria’s water infrastructure:

“In July 2014, the government of Syria had estimated that 35% of all water treatment plants in the country had been damaged due to war. In Deir ez Zor, large parts of which are currently under the siege of ISIS, water pumping dropped by 90% due to war and resultant serious damage to water pumps. Both rebels as well as government forces are responsible for the destruction of water infrastructure during the Syrian civil war. In August 2014, when government forces conducted air strikes on ISIS positions in the eastern Syrian city of Rakka, one of the air strikes ended up hitting the city water plant and cut off water supplies to the locals. Whether the government forces intended to hit the water plant is not clear, but the damage was done. […] Militant groups in Syria have not spared even the water supplies reserved for refugees and IDPs. In September 2014, after a drought and a typhoid outbreak in the summer, conflict between government forces and militant groups destroyed the pipelines supplying water to Yarmouk refugee camp in south-western Syria.”

Furthermore, the report states that IS has been diverting water from Lake Assad to Iraq and Aleppo, “partly to provide water to the areas under its control and partly to threaten downstream opponents.” In addition, it says that IS has increased power generation at the dam’s power plant to 24 hours per day, while the maximum limit is four to five hours per day. The Free Syrian Army (FSA) controlled the dam earlier and only supplied electricity for an hour a day, while IS distributed electricity for eight hours a day when it took over. This was a “tactical move to garner support of the locals,” according to the report.

The two recent attacks on Syria’s water infrastructure show the “indescribable harm” is only continuing.