Wikipedia is used widely as a reference tool. The nature of Wikipedia, however, means that it’s accuracy and reliability can be suspect at times. In the area of chemical and biological weapons, Wikipedia is not optimum. It has proven to be inaccurate in some cases, misleading in others, or containing only part of the story. Also, as with most information sources, Wikipedia isn’t very good at letting the reader know that there are other things that they should know, which might be very important, but which are not actually in the article. This case study is a dissection and analysis of the Wikipedia page on the chemical warfare agent commonly known as Sarin.  As Wikipedia constantly changes, I am using the 21 December 2015 version of the Sarin Wikipedia page as the baseline reference for this case study.  In the event that the Wikipedia page changes in the future, a PDF of the page for 21 December 2015 is located here at this link.

Working from top to bottom on the Wiki, the following issues presented themselves to me: 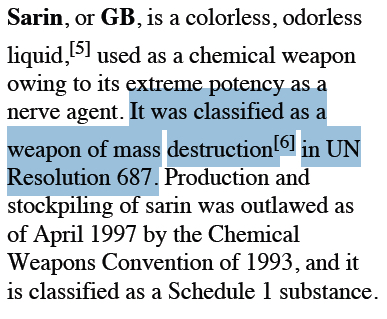 While most (but not all, see here) definitions of WMD would indeed cover Sarin. However, UN Security Council Resolution 687 does not actually mention Sarin. The footnoted reference doesn’t say what the page author claims it says. Therefore this reference is spurious and misleading.

Exposure to Sarin probably won’t kill in one minute. This is somewhat misleading. The actual mechanism of death after exposure to Sarin is hypoxia. The body stops taking in oxygen because of airway obstruction (due to excessive salivation) and/or failure of the body’s muscles to make the lungs work properly. Compromise of cardiac function will prevent circulation of new, oxygenated blood around the body. This process won’t happen in 1 minute. Likewise, a death from Sarin exposure by inhalation can take much longer than 10 minutes, depending a wide variety of factors. So, the 1 to 10 minute figure in the Wikipedia page is not accurate. The literature varies widely on exactly how fast Sarin death occurs, with a very small statistical pool from which to draw accurate measurements. Sarin animal studies show death occurring a fair bit slower than a few minutes, even for fairly potent lethal doses by inhalation causing death after 9 minutes in rats. (Ref: R. Gupta [ed], Handbook of Toxicology of Chemical Warfare Agents, 2009. Page 62). I do not believe this reference is freely available online, but it is widely available in larger libraries.

This section is somewhat misleading. While biperiden has been investigated as a nerve agent antidote (as correctly stated later in the article), it is not fielded or stockpiled in a widespread manner for this purpose. Use of the word “typically” is not correct here. In addition, the US government web page cited as footnote 5 does not mention biperiden. Use of this footnote to justify this sentence is incorrect. 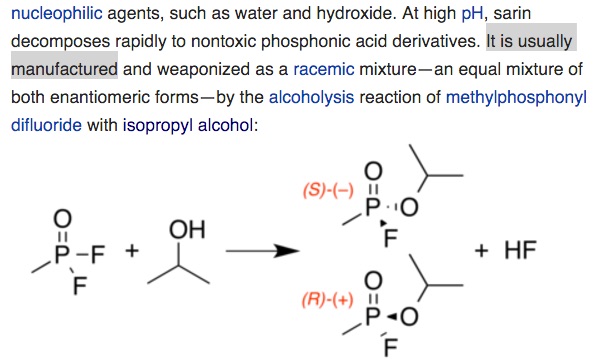 The chemistry is correct here. However, this passage is deceptive. There are numerous production pathways that lead to Sarin. There are two actual final steps to make Sarin. One is the step above wherein methylphosphonyl difluoride (DF) is combined with isopropyl alcohol, resulting in a 50:50 mix of Sarin and hydrogen fluoride (HF). The other method is quite different, mixing a cocktail of DF and methylphosphonic dichloride (DC) with isopropyl alcohol, yielding a mix of Sarin and hydrogen chloride. This process is referred to as the “Di-Di” process or method. It is misleading to imply that the DF + Alcohol method is the only way to make Sarin.

It is also misleading to say that the DF + Alcohol method is the “usual way” to make Sarin. The Di-Di method yielded a product which was not largely contaminated with HF. HF is nasty substance which is, in many ways, more dangerous than Sarin and rapidly destroys or degrades storage containers and weapon systems, as well as seriously reducing the shelf life of the Sarin. For this reason, the United States used the Di-Di method to product its very large stockpile of Sarin in the 1950s. All of the Sarin stockpiled by the US military was produced by the Di-Di method. A variant of the Di-Di method was also used by the USSR, and was one method tried by Iraq. (See here.) Use of the word “usually” is wrong in this context, when well over 90% of the Sarin ever made was not made by the indicated method.

This statement is wrong. This issue has come up before. The only recorded uses for isopropylamine in Sarin are in binary weapons, wherein DF and isopropyl alcohol are mixed on the way to the target (or right before launch, theoretically). The vast majority of Sarin manufactured in world history did not contain isopropylamine, including the Sarin made by Nazi Germany, the US, the USSR, and even the Aum cult. This issue has already been discussed at length on Bellingcat, in this post. 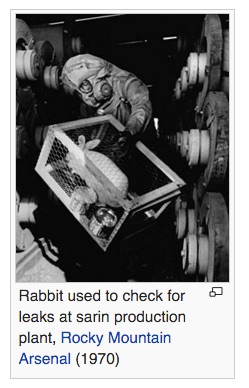 This photo and this statement provide incorrect information about Sarin production in the United States. US Sarin was produced at Rocky Mountain Arsenal. However, production ceased in August 1957. The re-distillation claim is correct, however. If the photo does date from 1970, it would be of storage or possibly redistillation activities, not production.

This passage contains some errors. Correctly manufactured Sarin, with residual acid largely removed, correctly stored, has a shelf life measured well into multiples of years not weeks. US Sarin produced at Rocky Mountain Arsenal, albeit with additives, lasted well into the 21st century, much of it as good as the day it was made. Mind you, significant research and development efforts were undertaken to ensure this shelf life. Thousands of tons of Sarin produced in 1953-1957 lasted through the cold war. This is not possible if it has a shelf life of months. Sarin with it’s impurities left in after manufacture, however, does have a very poor shelf life.

This statement is vague and ill-defined. There are multiple forms of cyanide and multiple routes of exposure (inhalation, ingestion, etc.) This statement does not state the basis of comparison, i.e. a like for like respiratory exposure over a specified period of time.

This paragraph is not up to date. While it is accurate in what it says, it is quite dated.  There is a newer technique, used by the WHO/OPCW investigatory mission to Syria, called fluoride regeneration. This technique, described here and here, can allow for post-exposure diagnostics for a much longer period after exposure than IMPA assays or cholinesterase activity.

The Wikipedia article on Sarin is not terribly accurate. I would not rely on this information as it is a cocktail of truth, half-truth, misleading information, and occasional errors.  Alas, other chemical and biological warfare-related Wiki articles contain similar errors.  Others may find other errors in this particular article.  If so, contact me by the comments section and I will include additional errors in this article as time permits.