Ahead of the commencement of the MH17 trials in the Netherlands on March 9, 2020, various Russian government officials have made statements defending Russia against accusations that Russia provided the Buk missile launcher that shot down MH17 on July 17, 2014. Russian Ministry of Foreign Affairs spokesperson Maria Zakharova complained of “planted news citing some mythical ‘irrefutable’ evidence, with witnesses’ details classified and links to sources that cannot be opened” and complained of a “media campaign” against Russia supposedly launched before the trial.

Other Russian officials have been more specific in their accusations. Referring to images of a Buk missile launcher in separatist held Ukraine and linked to the downing of MH17, Russia’s Ambassador to Australia, Dr. Alexey Pavlovsky, told Australia’s News9 that “Many of these pictures have been heavily tampered with. It seems that the Australian Federal Police as part of the investigation also had information to this effect but it somehow chose to withhold it from the public.”

Russia has repeatedly claimed images of the Buk in Ukraine were fake, with the Russian Ministry of Foreign Affairs stating in June 2019 that Russia had produced “precision expert analysis proving that the video clips supporting the JIT’s [Joint Investigation Teams] conclusions were fabricated” along with an earlier presentation by the Russian Ministry of Defence in September 2018, which claimed videos published online and used by the JIT to detail the route of the Buk through Ukraine were fabricated — seemingly plagiarising said claims from bloggers. 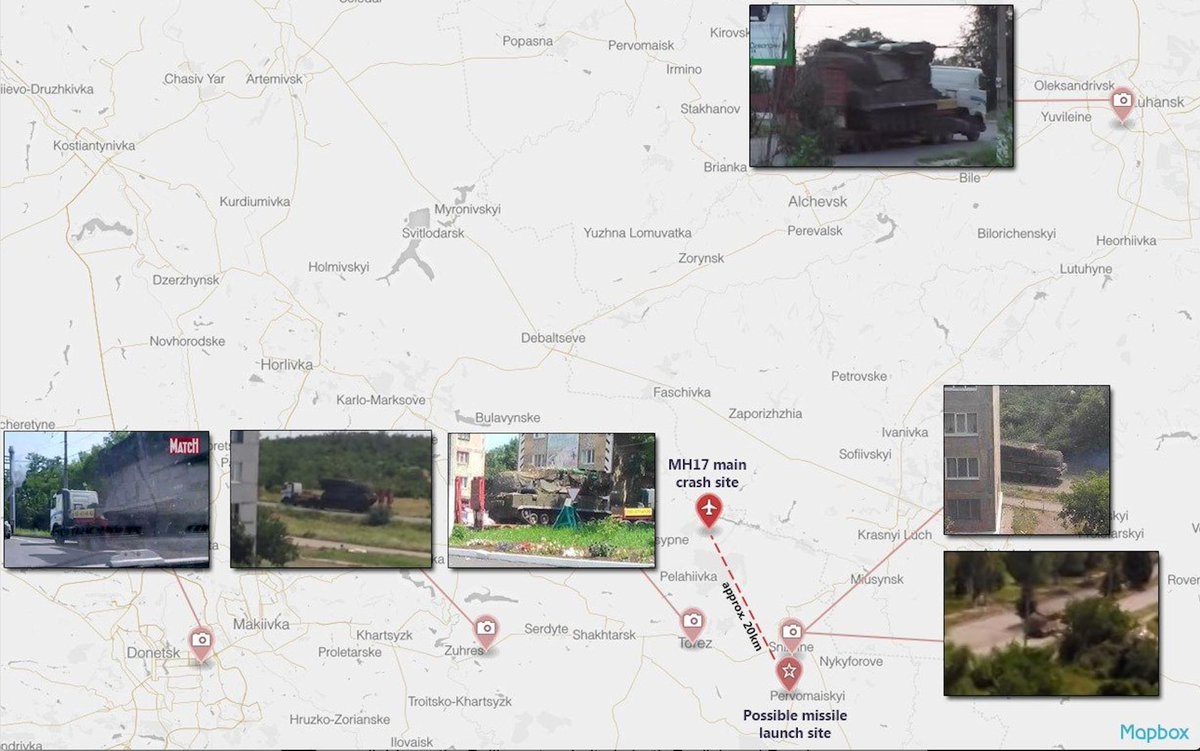 A map showing the locations of images geolocated by Bellingcat and others of a Buk missile launcher travelling through separatist controlled territory on July 17, 2014

While it might seem bizarre for any government to provide plagiarised conspiracy theories and online rumours as their evidence in issues as serious as MH17, Russia has a well established track record of doing so, both with MH17 and earlier incidents, such as the August 21, 2013 Sarin attacks in Damascus, wherein Russian officials, including Russia’s Foreign Minister, Sergey Lavrov, repeated claims made on conspiracy websites in their statements to the media.

Russia and its supporters rely heavily on these claims that the videos and photographs of the Buk in Eastern Ukraine were faked — so, for a moment let us take these claims at face value. What if these images really were faked?

First, the fakers created images along a route that allowed it to be tracked from Donetsk to Snizhne, close to the location that would later be described by both Bellingcat and the JIT as the launch site of the missile that shot down MH17. This, of course, is not impossible, especially if the claimed launch site is part of the conspiracy, but there’s much more than just several photographs and videos of the Buk.

Along with the images of the Buk, there were a number of social media posts made about the Buk travelling through various locations along the route. These posts were published prior to MH17 being shot down, and, often, shortly after the Buk had passed through the area. The timing of these social media posts was consistent with details established about the time the images were taken, such as the position of shadows, or else the time it would have taken the Buk to have travelled from one location to another. For example, the following post, made at 12:16 p.m. local time, describes the Buk travelling through Torez towards Snizhne, consistent with the timeline established using other sources:

So not only were images supposedly faked, but social media posts were also faked, and published prior to MH17 being shot down — the clear implication being that the videos and photographs were not hastily created after MH17 was shot down, but part of a preplanned effort to fake evidence to blame Russia for shooting down MH17.

These social media accounts had existed for quite some time, so they would have been created months, if not years, in advance. Does this mean the plan to fake the shooting down of MH17 had begun even before the conflict in Eastern Ukraine kicked off? This would have required extraordinary foresight, and is hopefully something the Russian Federation can explain at some point.

But it doesn’t end there, more organisations then would have become part of the conspiracy. In May 2016, Stratfor published satellite imagery provided by Digital Globe, showing the convoy transporting the Buk missile launcher at exactly 11:08 a.m., in a location very close to one of the videos showing the Buk convoy. This image is also now available for anyone to view on Google Earth, so following the logic that the images were faked, this means Stratfor, Digital Globe, and Google are all part of the conspiracy. 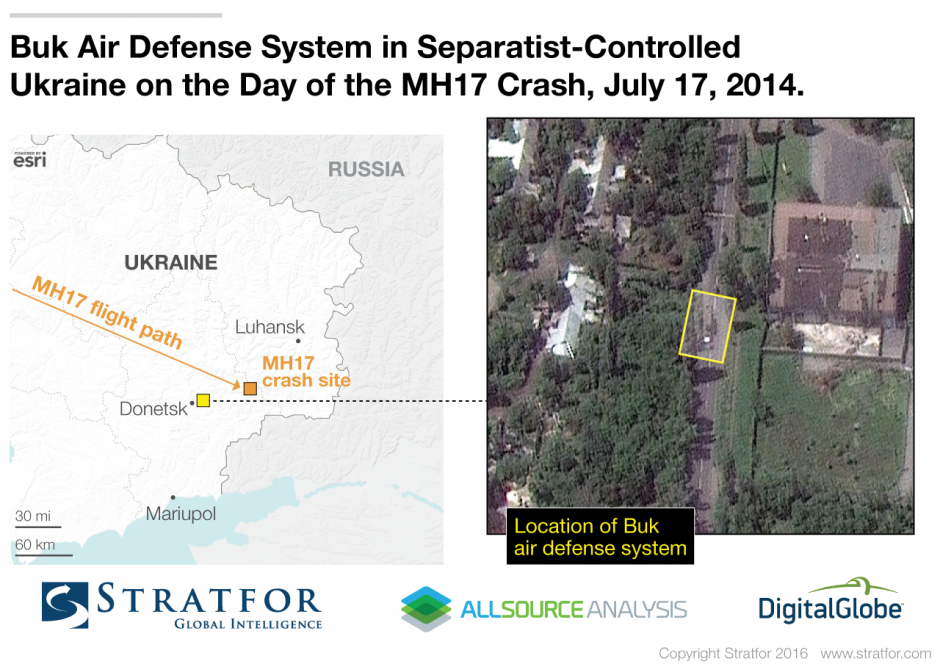 The media also would have had to get involved if a cover up took place. Before it was publicly known MH17 was shot down, a story was published by the Associated Press which included details of a Buk missile launcher arriving in Snizhne, the final location where the Buk missile launcher was filmed and photographed. If these images captured in Snizhne were fake, then it would stand to reason the AP reporter was part of the conspiracy, as he reported seeing this non-existent Buk before MH17 was shot down.

After MH17 was shot down, reporters on the ground in Ukraine went to the locations where the images of the Buk were geolocated to, and found witnesses who spoke to them confirming the Buk had passed through those areas at times consistent with the timeline established, using other sources. If Russia is correct and these images are fake, then either the reporters, working for multiple outlets, created fake witnesses, or the witnesses they spoke to were som how part of the conspiracy. Exactly how this was supposed to work is another question for the Russian Federation to answer.

Even some of the separatists must’ve gotten onboard with the conspiracy. Alexander Khodakovsky, commander of the pro-Russian Vostok Battalion, spoke to Reuters in July 2014, confirming that separatists had a Buk, stating:

“I knew that a BUK came from Luhansk. At the time I was told that a BUK from Luhansk was coming under the flag of the LNR [Luhansk People’s Republic]… That BUK I know about. I heard about it. I think they sent it back. Because I found out about it at exactly the moment that I found out that this tragedy had taken place. They probably sent it back in order to remove proof of its presence.”

In addition, multiple audio intercepts were published by the Joint Investigation Team and SBU (Ukrainian intelligence) between multiple individuals belonging to various separatist factions, the identities of which Bellingcat established, discussing the transportation of the Buk through the locations seen in in the videos and photographs. According to the Russian theory, this would mean all these audio recordings were faked, with details, both big and small, entirely consistent with all the other open source evidence gathered.

To believe that Russia’s claims about images of the Buk in Ukraine being faked are true, you would have to believe in a conspiracy, planned months, if not years, in advance, using fake social media posts posted online before MH17 was shot down; carefully crafted videos and photographs being created; fake satellite imagery distributed by Stratfor, Digital Globe, and Google, the involvement of multiple journalists and/or fake witnesses both prior to MH17 being shot down and afterwards; a separatist commander telling Reuters a Buk was transported through Luhansk on July 17, 2014; and multiple audio recordings faked to carefully support the fabricated imagery.

The absurdity of this scenario, and the total lack of real evidence to support it, reveals the vacuous nature of claims made by the Russian Federation about this evidence, and demonstrates, yet again, that Russia’s capacity for deceit in the case of MH17 seems only limited by the amount of conspiracy theories it can rustle up online. If this is the best the officials of the Russian Federation are able to muster when faced with a wealth of evidence detailing its involvement in the shooting down of MH17, then the prospect of the MH17 trial starting on March 9 must fill them with dread.