MH17 In Their Own Words: Witness Testimonies on Social Media from July 17th, 2014

On July 17, Bellingcat conducted a reenactment of the social media reaction to the MH17 disaster from the account @mh17live. All of the information here, along with many other reactions and speculations from 1 year ago, was retweeted and translated on this account.

In the days following the downing of MH17, narratives fell into place from the sides of Russia / pro-Russian separatists and Ukraine / Western nations. Journalists and investigators have gathered numerous witness accounts that attest to both Ukrainian narrative (a Buk anti-aircraft system brought down MH17 from south of Snizhne) and the Russian narrative (Ukraine shot down MH17 either with an SU-25 fighter jet or with its own Buk, likely near the village of Zaroshchenske). The most raw and unfiltered information available is not in the interviews taken in the weeks and months after July 17, 2014, but instead the social media postings that were composed in the morning and afternoon of July 17 before the tragedy, and immediately after the downing, before it was clear that nearly 300 innocent people died in a senseless act.

This article will examine the available social media accounts available that confirm the existence, location, and general timeline of a Buk anti-aircraft system in separatist-held territory on July 17 and reports of locals reporting an event that is consistent with a Buk missile launch just minutes after 4:20PM (Kyiv time), when the tragedy took place. Even though initial witness reports can be unreliable, there is a clear, remarkable consistency in these independent reports that strongly support the notion of a separatist-controlled Buk being murder weapon in the MH17 disaster.

The generaly accepted timeline of Buk 3×2, which is suspected in the downing of MH17, with very approximate and broad ranges of time:

Many of the tweets attesting to a Buk (or, at least, a large piece of military equipment that very well may have been a Buk) are attributed to @666_mancer. This popular user likely may not have seen any of the scenes himself, but instead collected witness accounts from others and re-posted them in one place. A similar pattern will later be seen with @Wowihay, who no longer lives in Torez, but collects witness testimonies from locals. As it is often not safe for someone to post an sighting of separatist military maneuvers on a personal Twitter account, it is safer for a single person (who is either anonymous or no longer lives in the town) to post them. Additionally, the #Stopterror (#Стоптеррер) hashtag that frequently appears in these tweets was meant to inform the Ukrainian military of separatist military maneuvers, thus providing crowd-sourced intelligence from locals with eyes and ears on the streets. 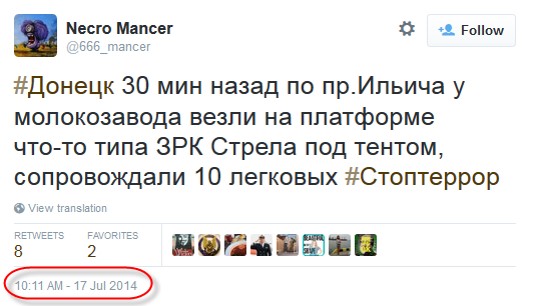 Donetsk 30minutes ago along prospect Ilicha by molokozavod some sort of anti-aircraft complex, like a Strela, was transported on a platform underneath a cover, accompanied by 10 normal vehicles 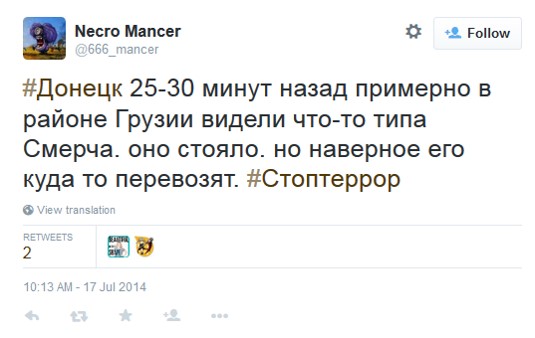 #Donetsk 25-30 minutes ago around the Gruzia area something that looks like a Smerch was seen. It was sitting there. But maybe they are going to transport it somewhere or another. #Stopterror Donetsk: “Not a smerch. 1. Its base is tracked. 2. No long firing tubes are not long. It visually resembles a BUK a lot. However, there were no mounted rockets” #Stopterror #Donetsk witnesses: the front of the vehicle is similar, but then came a trailer on which there was something underneath a cover, tracked, with one cannon #Stopterror in the morning people wrote that it [a Buk] was at the crossing Shakhtostroiteley Boulevard and Prospekt Ilyicha, facing Makiivka. they were waiting, it seemed… shakhtersk kamaz of terrorists, 3 tanks. Before them possibly a Buk passed by, covered up #ato 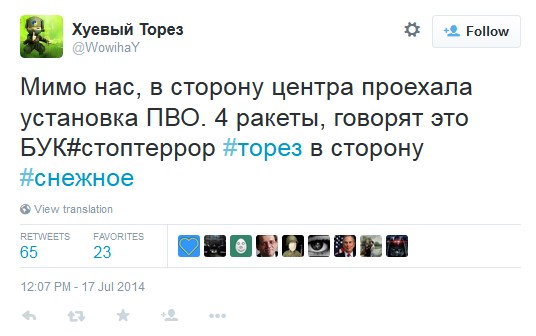 They hauled a rocket complex on a low-loader escorted by two vehicles through Torez towards Snizhne at 12:10pm A BUK is going through #Torez to #Snizhne #Stopterror 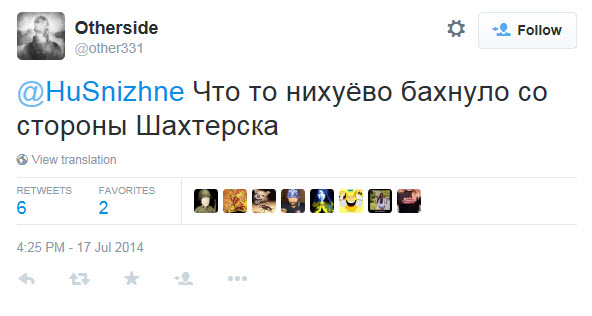 Below are the replies to this message, which describe the sounds that the locals heard minutes before: A local Snizhne woman (who is pro-separatist) named Olya Krivosheenko heard what was likely a rocket above her before MH17 was struck. Later in the comment thread, she said that it was good that they hit a Ukrainian plane if they were there to bomb the town, as had happened in Snizhne just a few days prior. Dima, got it, something buzzed above us but not like a plane, they say that a rocket went up to it

Sergei Petrov, a man who lives in Snizhne without any clear ideological leanings (other than a love of football), described a series of events that sound much like a rocket launch. Vlad, I also didn’t immediately realize. I saw that something was flying. I was out in the country in a tree and picking pears. And then an explosion. There was an extremely strong sound…I would have captured it on my phone (((( but people did capture the end

A local man who supports separatist forces in the area posted:

I saw how this rocket flew!!! I even saw where it came from and where it went!!! It was terrible as hell to see it!!!!

Irina Shcherbakova, a local Snizhne woman who supports the local separatists, saw a rocket launch immediately before the downing of MH17: I saw how a rocket flew from the direction of Saurovka…and then a minute-long lull and a loud explosion…a trail remained in the sky from the rocket…I didn’t see the explosion myself it was very loud….all of my family ran out into the street…..we were all very scared……….I don’t know who to believe but we didn’t hear the sound of an SU[-25]…..it was quiet just like with a normal passenger plane and then that’s all……

Reply soon after from Anastasiya, another local woman from Snizhne who supports the separatists:

Anastasiya: Yes, it was so.

Irina: Anastasiya, you also heard it

Anastasiya: Irina, I saw it

Andrei Tsarev: Someone says that a rocket flew from mine #4, someone from Saurovka, what’s the truth?

Irina: I am saying that I saw it

Kolychiy: Andrei, this is in a direction in relation to the location of the crash

Anastasiya: Andrei, I live at Cheremushki, the rocket flew from the direction of the city. Exactly where it was fired from, I can’t say.

Irina:  But the sound it made….

(later on, Irina posts that she “wants to become Russian” and posts a picture of a Taras Shevchenko [edit: thanks to Andriy Makukha] statue holding a Donetsk People’s Republic flag)

There were two messages from “Vanek Samarsky,” a separatist fighter living in Snizhne whose real name is Ivan Krivobedry, written immediately after the downing of MH17. These seem like they could be related to the incident, but lack context.

are you around the cannon that was at the 4th?

Reply from a local:

The word “cannon” here (пушка) is very broad (see Google Image search result here for a good idea), and most often refers to an actual 18th century cannon or a wide range of modern weapons, including an anti-aircraft gun or nuclear missile launcher.

She uses the feminine pronoun (она) when speaking about the thing that launched and flew. She is almost certainly talking about a rocket (ракета), which is grammatically feminine in Russian.

When discussing “the 4th” and “the 8th,” the two are almost certainly talking about the 4th and 8th mines. The latter is located in Snizhne proper, while the former is located in the village of Removka, just south of Snizhne. When Vanek is talking about the “4th,” he is not just talking specifically about the mine, as locals often refer to the area around the mine as the 4th, or 4th mine (for examples, see these posts: 1, 2, 3, 4) don’t write where they fired from if you don’t want them to bomb us.

“Vanek” (Ivan Krivobedry) posted this message twelve minutes after his previous message about the “cannon” being near Mine #4.

This is the most famous of all messages regarding MH17. This particular post comes from the “Dispatches from Igor Ivanovich Strelkov” VK group. Strelkov (Girkin) himself did not post this message; rather, some “fans” of his posted the message from local information. It was taken down as soon as it was evident that a passenger plane, not an AN-26 transport plane, was shot down. “In the area of Torez an AN-26 plane was just shot down, it is somewhere near the mine ‘Progress.”

And here is video proof of yet another “falling bird.”

The bird fell behind the mine, residential areas were not hit. Peaceful citizens were not hurt.

And there is also information about a second shot down plane, likely a SU[-25]”

Though each piece of social media evidence described in this article is not conclusive on its own, a clear pattern emerged and matches the widely accepted narrative of July 17. A Buk anti-aircraft system was located in Donetsk in the late morning, headed east through Shakhtarsk, moved through Torez at around 12:10, and headed south out of Snizhne later that afternoon. A rocket was fired—both seen and heard by locals supporters of separatist forces—from south of Snizhne immediately before the downing of MH17.

Analysts have investigated (investigated the investigations of) the events of July 17 endlessly over the past year. Among these investigations include dishonesty and the outright fabrication of evidence, as seen in the July 21 Russian Ministry of Defense press conference, the infamous fabricated satellite photo on Russian state television, and a false Ukrainian claim of its arsenal of Buk missiles. While much of this analysis has been vital and necessary in debunking such lies and establishing the narrative of July 17th, one does not need to look much further than the eyewitness accounts of the residents of the Donbass from July 17, 2014 to find the true cause of the downing of MH17.