On May 3rd 2016, a new video of what appears to be the July 17th 2014 Buk convoy was uploaded to YouTube, and was on May 11th discovered by Twitter users @amishjihadi and @loondale. In the video, there are several details visible which seem to indicate this is the same Buk TELAR that has been recorded moving towards the suspected Buk missile launch site, thus associating it with the downing of MH17.

At this time, it’s not known what the origin of this video is and why it was uploaded only now, but the video seems to be dashcam footage, which based on the watermark visible has been cropped with a video editing program called CropiPic.

In the video at 0:47, the same white truck from earlier Buk transport videos can be seen. The truck has the Buk TELAR loaded on the back, and there appear to be four missiles mounted, with a camouflage netting covering them. At 0:48, the side of the unit can be seen, which shows the same white marks that have been seen on the previous close-up pictures of the TELAR. 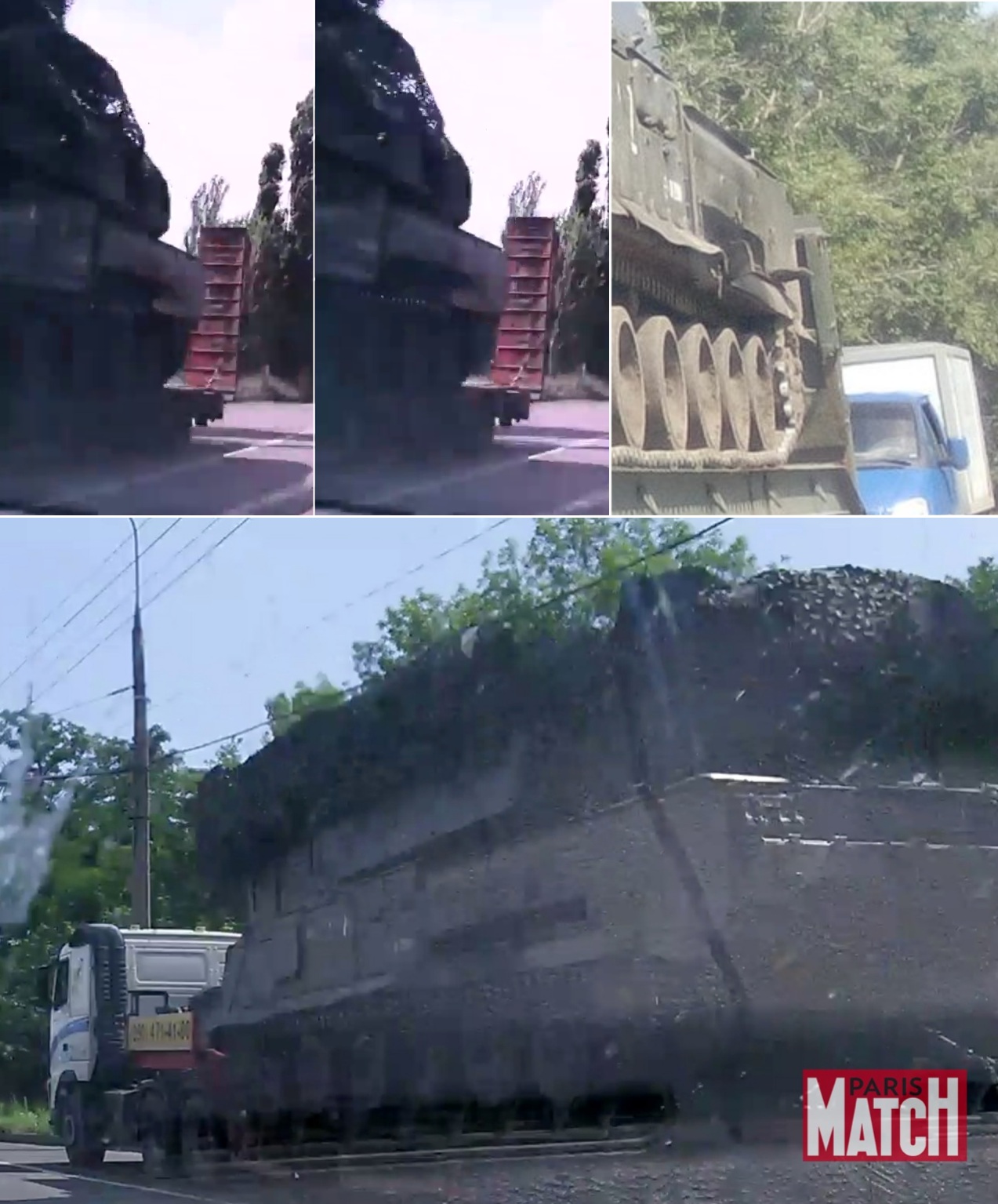 An interesting detail that provides further validity to the link to the previous videos are the escort vehicles that can be seen before and after the truck. Bellingcat has previously reported about the vehicles, and we can direct matches: there is a Toyota RAV4 in front of the truck, with a UAZ-469AZ and VW Transporter following it.

The description in the video claims the location to be Makiivka, east of Donetsk. There are details visible in the video which make geolocation of this video possible. The clearest landmarks are the gas station visible from 0:50 onwards, and the traffic circle towards the end of the video. The Parallel (Параллель) chain signs are clearly visible. In Makiivka, through Google Maps we can find one location which is located near a traffic circle, giving a good reference point for further validation. View from video, in which the fuel station, roundabout, and lines of trees are all visible

More detailed geolocations have been completed by other open source researchers, including Anton Pavlushko and @DajeyPetros (also known as Putin@War/Ukraine@War). The geolocations reveal that the convoy is headed eastward in southern Makiivka. 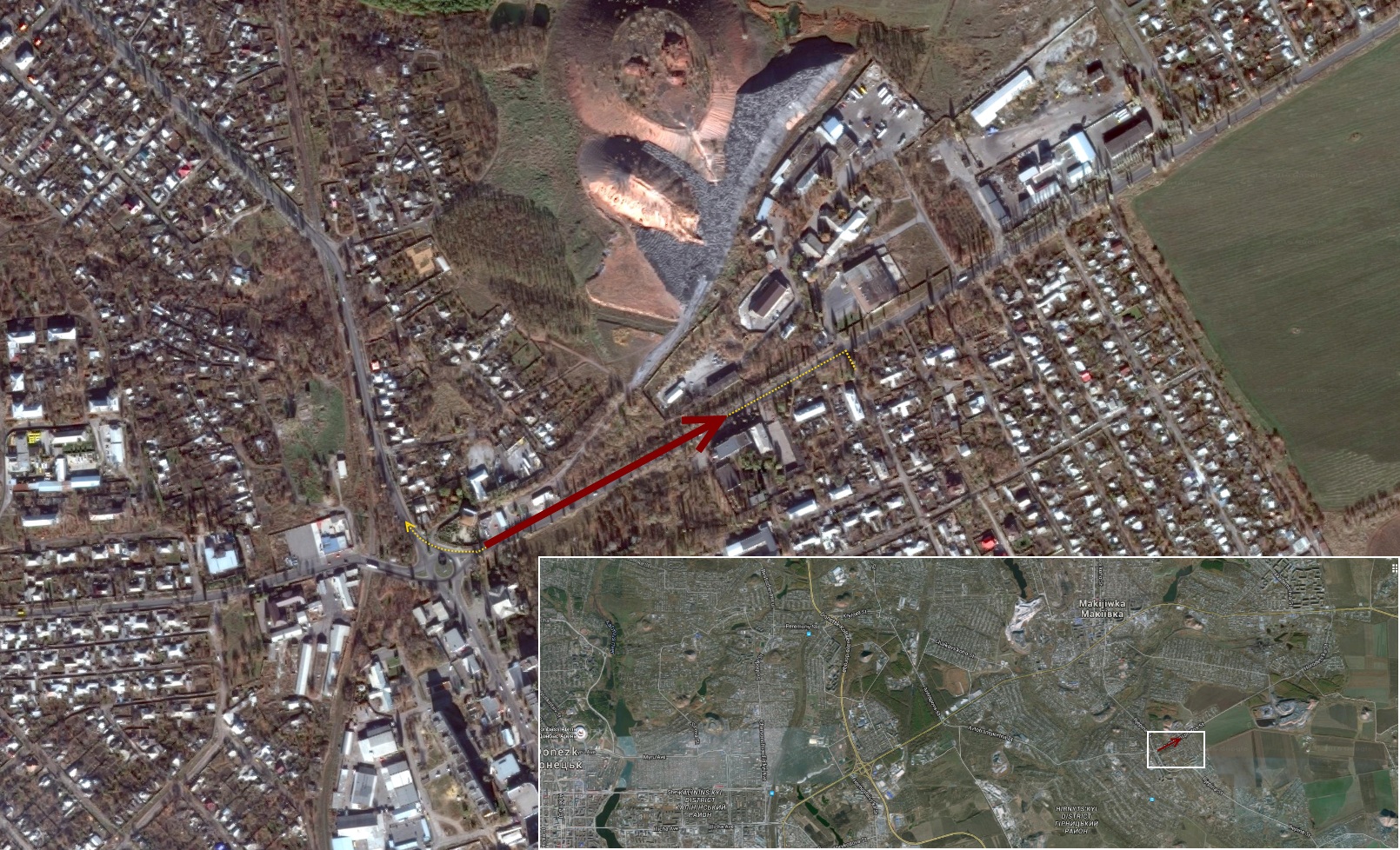 Local map of the convoy’s location and direction eastward, and larger route in eastern Ukraine (bottom)

Additionally, as found by InformNapalm’s Anton Pavlushko, the roundabout and billboard visible at the end of the video matches that of the roundabout just west of Kapitalnaya Park.

Webpage advertising the billboard at roundabout

The time of the video can be confirmed to be in mid-July 2014 as well. As pointed out by Twitter user @WowihaY, the fuel prices in the video match that of a page archived on July 18, 2014 on the webpage of the fuel station in the video. 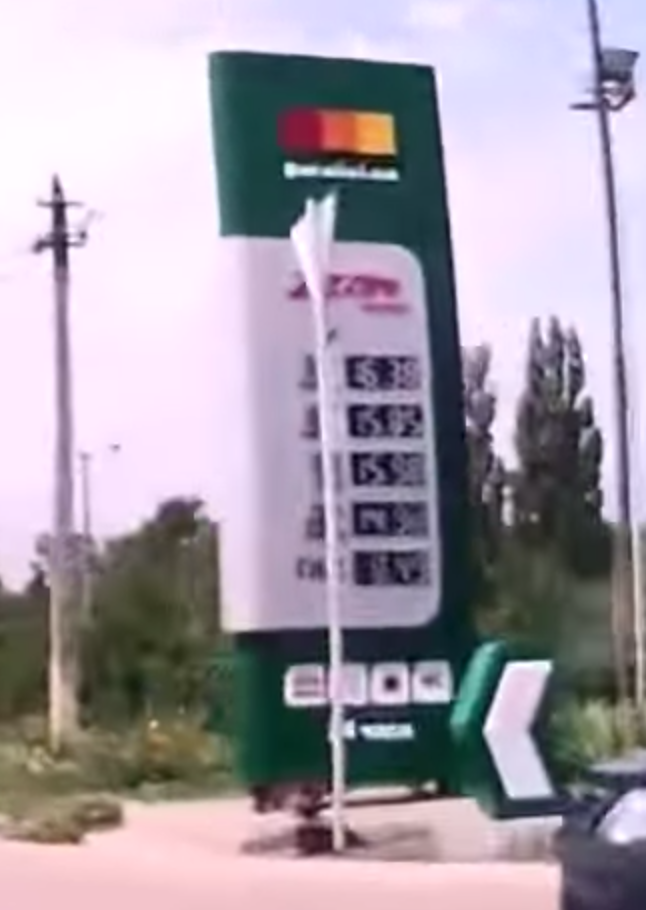 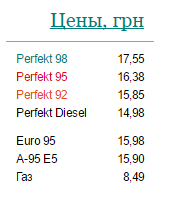 The visible shadows indicate that the video was taken in the late morning, which is in line with the anticipated time frame of the transport. The exact time of the video has yet to be determined.

The importance of this sighting is that it provides further insight to the actual route taken by the Buk convoy. A railway bridge on the H21 road at 48.033594 37.950988 makes the direct route through Makiivka difficult due to the height of the Buk transport, so it seems the convoy diverted slightly from the main road in Makiivka to work around this problem via a southern route through Avtotransportna St. This is the same route taken by a heavy transport convoy on July 15th, where the same escort vehicles were present.

In summary, the new video provides interesting new details about the July 17th 2014 Buk convoy composition and route. Further investigation and validation into the sighting and its implications is warranted.