At 10:40am on the morning of 17 July 2014, one of the first mentions of a Buk missile launcher in Donetsk reached the internet. This came in the form of a post on the “Donetsk is Ukraine!” VKontakte (VK) community, warning of the Buk’s arrival from Makeevka and the presence of three civilian vehicles:

“Bad news. Around 9am, a hauler was going along the Makeevka highway from Makeevka in the direction of Donetsk. On the platform was a BukM1-M2? This AAMS proceeded to the intersection with Shakhtostroiteley Boulevard. The system was accompanied by a convoy that was composed of 1 gray Rav4 SUV, a camouflaged UAZ, and a dark blue Hyundai van with tinted windows. As of 9:15am, the vehicle was located at the intersection of Shakhtostroiteley and Ilycha. The militants got out of their cars, blocking 2 of the far left lanes. Obviously, they were waiting for logistical guidance.”

This news was printed on two Ukrainian news sites, and shared in tweets. The information was later corroborated through reports on local channels of the group voice communication platform Zello.

Two of the automobiles described in this message were later seen in Donetsk and Torez, just meters away from the Buk 3×2, the Buk-M1 missile launcher that is widely believed to have downed MH17. The RAV4 SUV is likely the same one parked next to the Buk in Donetsk hours before the downing of MH17. This RAV4 fits the description of the European version of the 2010 Toyota RAV4, with a non-stock roof spoiler and a rear spare tire. The RAV4 is seen here in a photograph shared by the tabloid Paris Match: 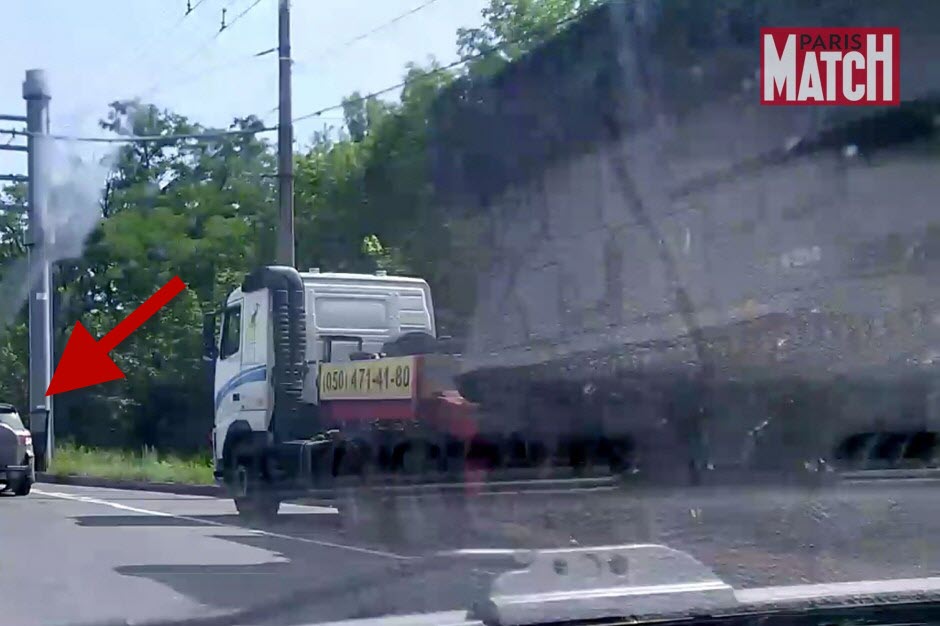 A UAZ-469 jeep was seen with the Buk in Torez just after noon, likely a couple of hours after it had left Donetsk. The photograph was uploaded on VKontakte on the day of the tragedy: 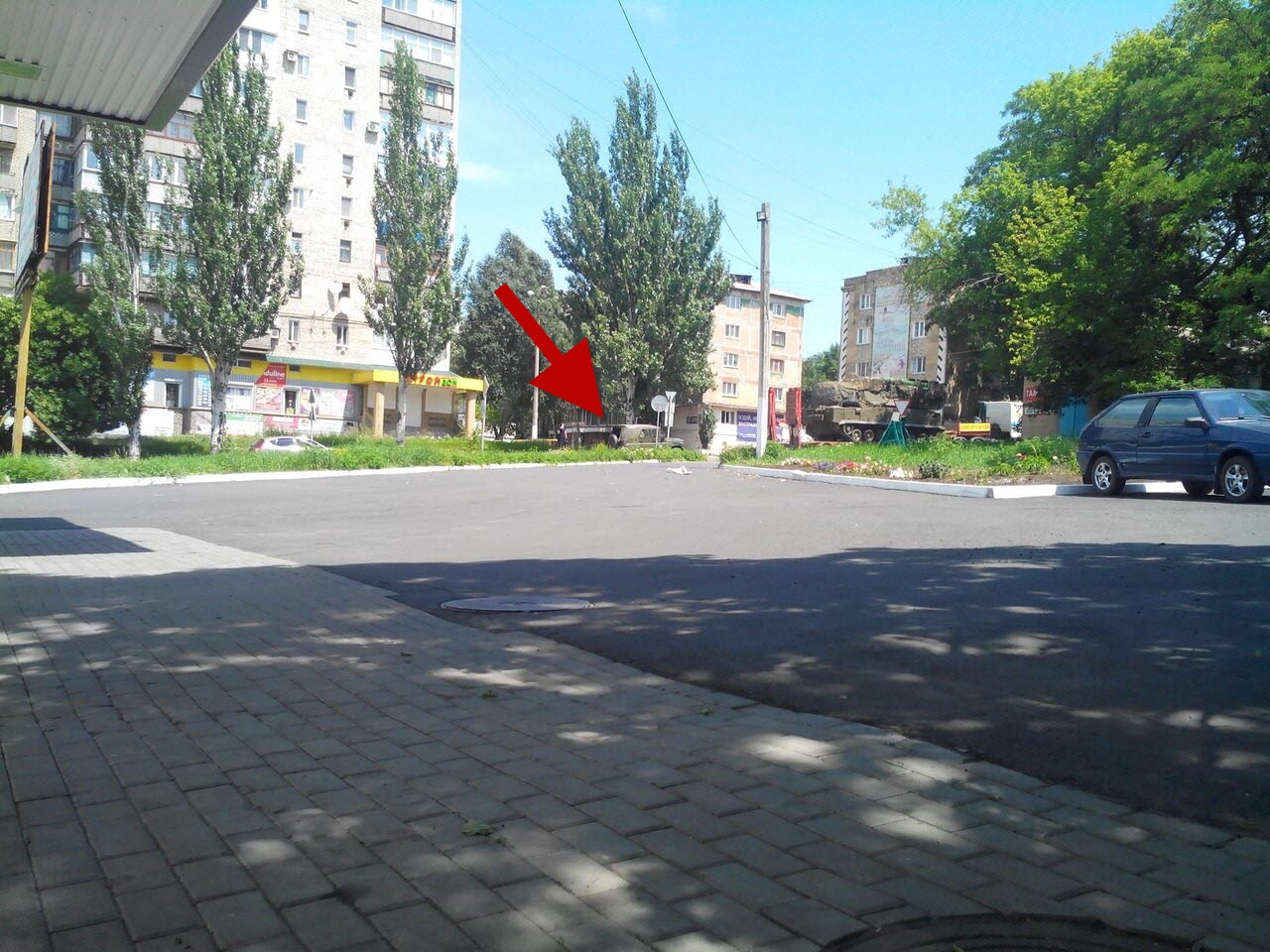 The BBC spoke with an eyewitness (from either Snizhne or Torez) from the day of the tragedy, who said that “an officer in a military jeep escorting the BUK spoke with a Muscovite accent.” This jeep is likely the same one seen in the Torez photograph.

The Hyundai van is harder to pin down, as there are not many Hyundai vans used by separatists in convoys. It is possible that the “Hyundai” van was actually a Volkswagen, which are frequently spotted in convoys with Donetsk separatists, but there is not information on this vehicle to make any reliable determinations. A dark van was spotted with the Buk near Zuhres just before noon, but it is not possible to make a clear determination if this is the same vehicle described in the earlier message.

This post in the Donetsk community is quite notable in its own right as a detailed witness report of the Buk in eastern Ukraine. However, the identification of the UAZ and the RAV4 are even more important when considering that the 2010 Toyota RAV4 and the UAZ-469 were filmed two days before the MH17 tragedy in a separatist convoy headed from Luhansk to Donetsk. There are several news reports, videos, and photographs of this convoy, allowing us to document the convoy’s movements and discern numerous details of the RAV4 SUV and UAZ jeep.

The bulk of the reports of the convoy are from its movement from Enakievo, through Makeevka, and to Donetsk on the afternoon of July 15, 2014. This convoy consisted of the following vehicles, which had various Russian and Novorossiyan flags at different points: 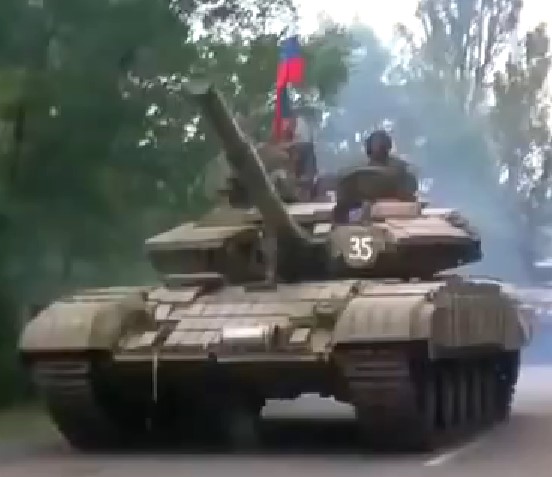 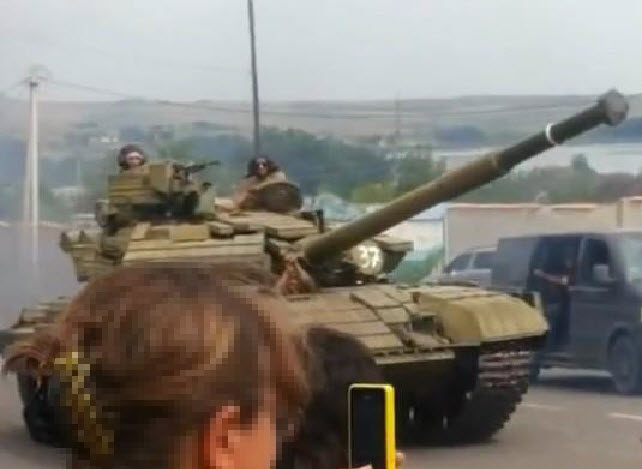 Scania P-series truck (likely a Scania P360 LA4X2HNA), with Scania griffin decal/sticker on the both sides of the cabin: Dark green UAZ-469 with white marks on both driver and passenger doors, license plate “АН 2226 ЕС,” and blue siren light. It is possible that this license plate is counterfeit: 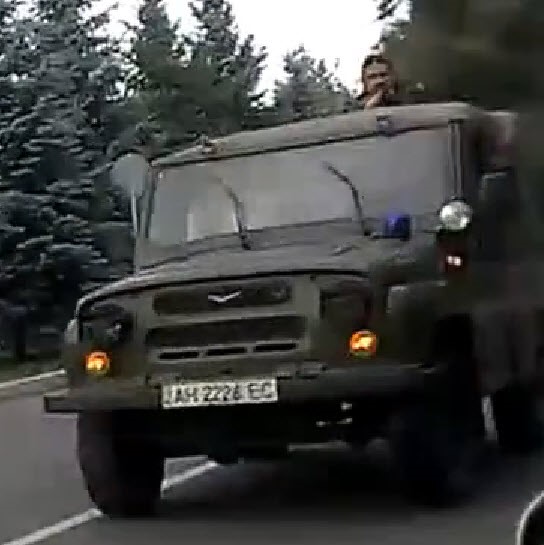 License plate of the RAV4

Further investigation of the RAV4 and UAZ-469

There are a few features to these two automobiles—the RAV4 and UAZ-469—that indicate that they were the same vehicles seen two days later with Buk 3×2. The RAV4 is uncommon with its modified rear spoiler and rear spare tire, both of which are visible in the Paris Match photograph. Compare this rear spoiler to the unmodified stock spoiler on the same vehicle:

The UAZ-469 has a white square on both its driver and passenger-side doors. This white mark is clearly visible in the Torez photograph.

The route taken by the 14/15 July convoy from Russia to Donetsk may not seem remarkable, but it confirms various details related to the transport of Buk 3×2 into and out of Ukraine. The Ukrainian news site Informator provides additional reports regarding this convoy. According to its reports, the convoy arrived in Luhansk at 7:50am on 15 July, including “a few tanks,” a BTR, and a large truck. The convoy was seen in Yubileyny at 8:05am and Alchevsk later in the morning, before arriving in Enakievo before noon.

The same website reported that a military convoy was seen in Krasnodon at 12:18am the same morning after crossing the Russian border the previous night, but it’s unclear which (if any) vehicles in the eventual Enakievo convoy were in this group

The route that the convoy took across the border, through Krasnodon, Luhansk, Makeevka, and finally to Donetsk is extremely similar to the route that Buk 3×2 may have taken on July 16/17 into Donetsk, according to the Joint Investigation Team’s video in which they call for witnesses. The main difference is in the entrance into Donetsk, which does not use Makeevka in the JIT’s map. As seen in the VK post at the beginning of this article, the Buk did arrive through Makeevka and through the Motel roundabout in eastern Donetsk. This location also reflects the Paris Match photograph taken near the Motel roundabout, where the Buk would have gone after coming back from the intersection of Ilicha & Shakhtostroiteley before heading east to Torez and Snizhne. Thus, the JIT seems to have miscalculated the route between Yenakievo and Donetsk, though in the video, the narrator mentions that the exact route between the cities is unclear, and asks for witness reports for a more complete picture. It is quite likely that Russian/separatist forces did not travel through the northern entrance because of Ukrainian control of some territory near the Donetsk Airport, as opposed to the stronger separatist control of territory between Yenakievo and Makeevka. Refer to our map of the convoy for a better view of the situation.

Additionally, judging by the information in the Informator articles, this 15 July convoy almost certainly took Nechuya-Levyts’koho Street in Luhansk—the same street that Buk 3×2 was filmed crossing in the early hours of 18 July, after the downing of MH17. It has long been unclear exactly which roads were under separatist and Ukrainian control on July 17 near Luhansk, as a battle near the Luhansk Airport was raging in mid-July. The route of this convoy confirms that this road through Luhansk and the route out of the city through the west, along with the rest of the route to Donetsk, was firmly under separatist control in mid-July 2014.

The VK post regarding the RAV4, Hyundai, and UAZ was one of the first online witness report of a Buk in Donetsk on the morning of the MH17 tragedy. Further investigation into the vehicles mentioned in this post indicate that vehicles matching the same descriptions were photographed near the Buk on the same day. Furthermore, two vehicles that strongly resemble the vehicles photographed near the Buk and mentioned in the early morning VK post were described, photographed, and filmed in a separatist convoy headed to Donetsk two days before the downing of MH17. If there is any remaining doubt, this connection provides further proof that the videos and photographs of the Buk on 17 July 2014 are genuine and that the Buk missile launcher seen in eastern Ukraine was under Russian/separatist control.

Further investigation must be conducted regarding the identity of the owners and operators of these two vehicles that accompanied the Buk that downed MH17.

Update: The timestamp for the VK post was not adjusted for summer EEST time. This has been corrected.