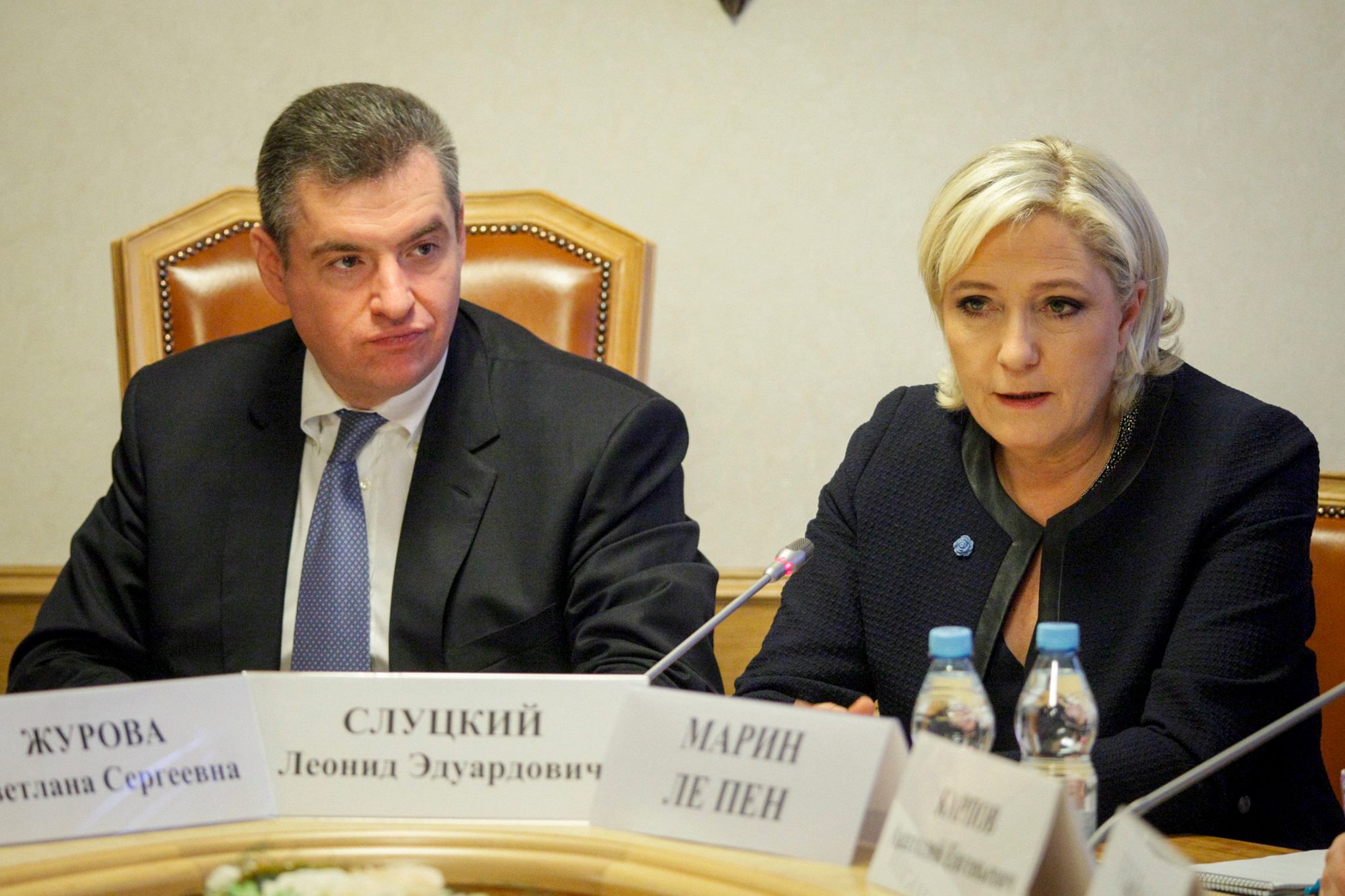 In late March, Marine Le Pen visited Russia, where she had meetings with Vladimir Putin, the Chairman of the Russian Duma Vyacheslav Volodin and Leonid Slutsky’s Committee on International Affairs.

Volodin told journalists that he discussed sanctions against Russia with Le Pen.

Volodin himself has been sanctioned, he was named by the EU as “responsible for overseeing the political integration of the annexed Ukrainian region of Crimea into the Russian Federation.”

According to US Treasury, “Russian President Vladimir Putin’s decision to move into Crimea is believed to have been based on consultations with his closest advisors, including Volodin.”

Discussion with Slutsky was similar, he called on Le Pen to “support Russia on European platforms” , addressing sanctions specifically: “that European and European institutions impose sanctions on us and deprive us of rights is absolutely unreasonable”.

Slutsky is also sanctioned by the EU and the US. He travelled to Crimea shortly after a new government in Kiev emerged. Two days later, a pro-Russian politician was declared prime minister and a referendum on Crimea joining Russia was announced.

After the results of the first round of voting in France, Slutsky said Le Pen voters “are those who want their future and of the French republic to be decided by them, and not by orders and methods from overseas”. He also added that “Le Pen’s entry into the second round shows the rise of protest moods not only in France but on the whole in the countries of Western Europe” 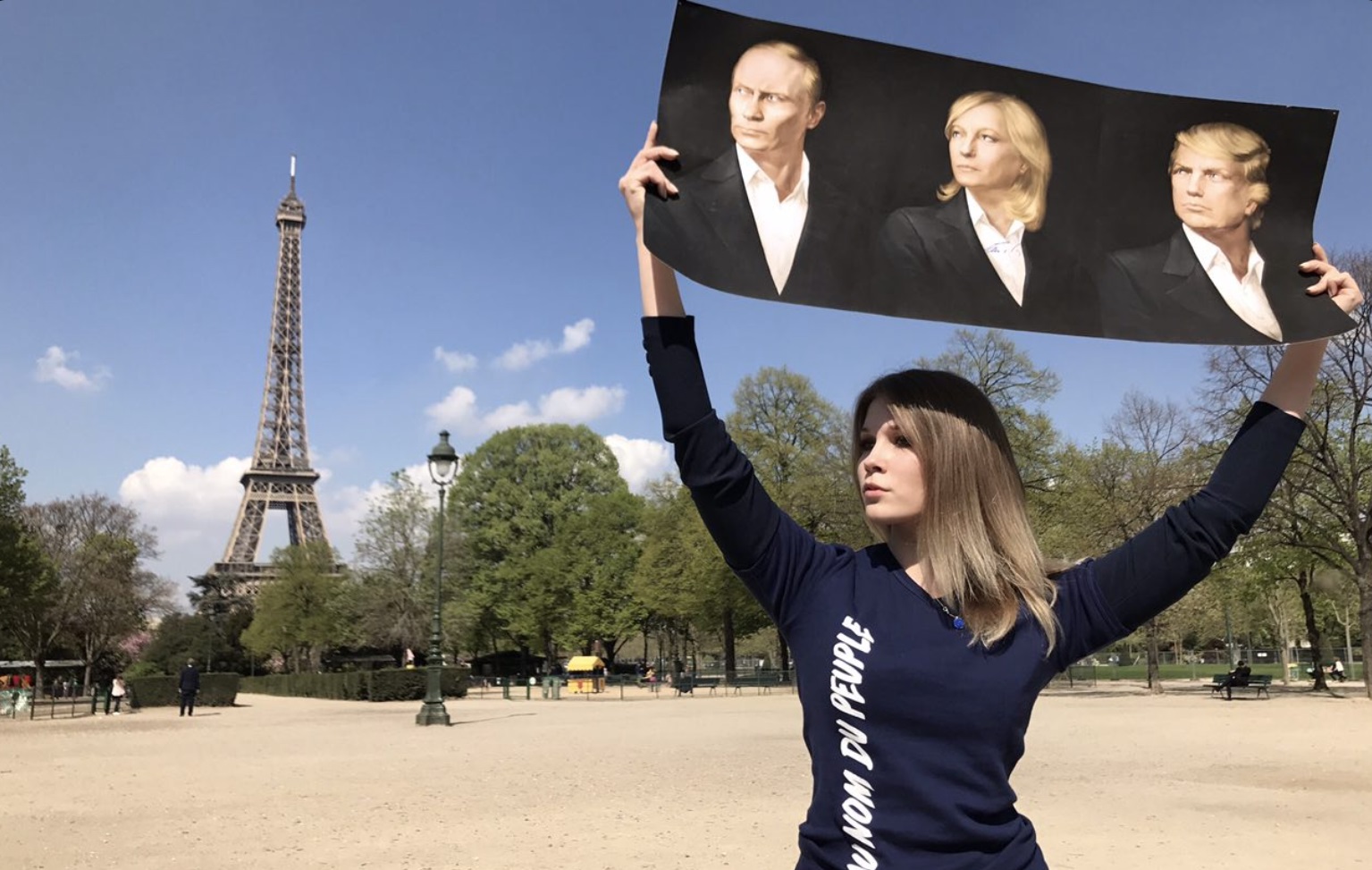 Maria Katasonova holding up the “Triptych” of Putin, Le Pen and Trump

As Donald Trump’s inauguration took place in January, a high-profile party took place in Moscow. The party was focused on portraits of Vladimir Putin, Donald trump and Marine Le Pen representing the idea that the “triptych” of the leaders “will usher in a new world order”. The event included a presentation by the author of the book gifted to Le Pen, Benediktov.

Maria Katasonova, a pro-Kremlin activist present at the party, met with Marine Le Pen twice in March and reportedly set up a movement named “Women for Marine” .

The first meeting took place during Le Pen’s visit to Russia. The second was in France, when Katasonova took the paintings to France and presented them to Marine Le Pen, the event was captured on camera and uploaded by RT’s Ruptly.

Katasonova started her career in politics working for United Russia politician Evgeniy Fedorov, but has come to media attention for her political campaigning. Vice’s Broadly mentioned Katasonova as an example of Russia’s use of “beautiful women in powerful positions”,

While Katasonova claims she is “working entirely in her free time and with her own funds”, the former US Ambassador to Russia Michael Mcfaul commented on her ubiquity throughout the French campaign: She’s everywhere! Who is buying the tickets?”

Her past activity shows efforts to influence foreign political movements. In February 2014, Katasonova and her close associate Andrey Kovalenko headed to Kiev at the height of unrest. A few months prior, Kovalenko met with Russian ambassador to the EU, Vladimir Chizhov.

Kovalenko and Chizhov discussed “instruments of soft power and support to eurosceptics and opposition parties in Europe”. Not long after, Kovalenko was at a talk presented by Rossotrudnitchestvo (the Kremlin’s verson of USAID). He wrote: “Rossotrudnitchetstvo in Kiev promises to support pro-Russian movements in Ukraine.

When Katasonova presented Marine Le Pen with the “Triptych” in France, she explained it “represents a political concept where the multipolar world comes to replace the unipolar world”.

The term “multipolar” is a favourite of Russian political scientist Aleksandr Dugin, who has written a book on the “Theory of Multi-polar World”.

Aleksandr Dugin’s daughter Daria joined Kovalenko when he met with the Hungarian party Jobbik in 2014. Like Katasonova, Daria Dugina has been active in the run up to the French Election.

Up until recently, Dugina reported for the nationalist Russian TV Station and news site Tsargrad under the name “Darya Platonova”. During this time, her father Aleksandr was one of the heads of Tsargrad and Katehon.

In one of her articles, Dugina warned of a civil war if Le Pen failed to win “Such an outcome might turn out to be a catastrophe for France: a civil war may flare up, and the European spring might resemble the Arab spring.”

Tsargrad and its partner website Katehon are owned by the Russian Billionaire Konstantin Malofeev, sanctioned by the EU for being”closely linked to Ukrainian separatists in Eastern Ukraine and Crimea”.

Dugina also published an exclusive interview with the French businessman Philippe De Villiers, described as a ”pillar of French conservatism and traditionalism”. Dugina wrote De Villiers, founder of the theme park Puy De Fou, endorsed Le Pen and claimed; ”the future of Europe must be written together with Russia!”. 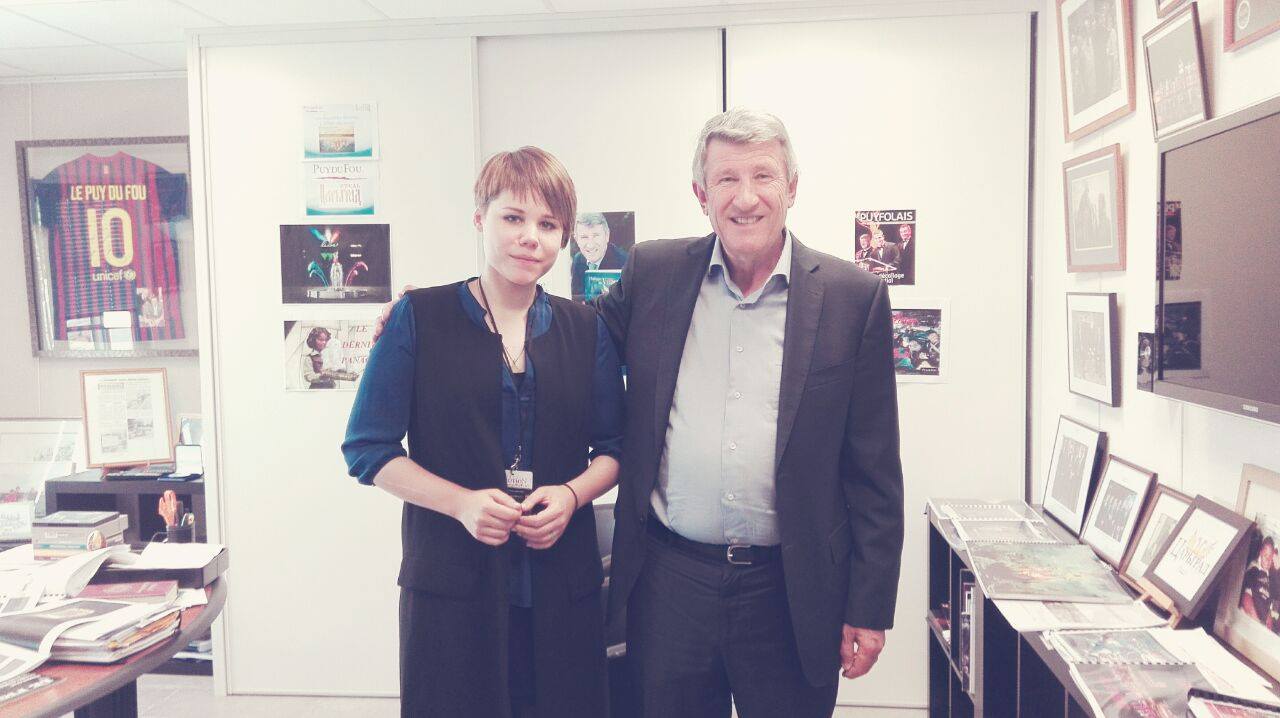 DeVilliers is also a business partner of Konstantin Malofeev, who has pledged to open a $500 million Puy De Fou near Moscow.

Dugina wrote a report accusing the US of imposing a “total ideological dictatorship” in France. The report was a joint project between Katehon and RISI. RISI, the Russian Institute for Strategic Investigations, was headed by Leonid Reshetnikov until the start of this year. Reshetnikov is also on the supervisory board of Katehon.

Earlier in April, Reuters reported that RISI is “run by retired senior Russian foreign intelligence officials appointed by Putin’s office” and that prepared a plan to interfere in the 2016 US Presidential election.

Circle of Russian influence in France

During her March trip to France, Katasonova also met with Pierre Malinowski, member of the Front Nationale.

In an interview published earlier this year, Malinowski said that he often travels to Russia and recently had a meeting with current Deputy of the State Duma Natalia Poklonskaya.

He has also been pictured alongside ex-Russian Railways head Vladimir Yakunin, at an event hosted by Yakunin’s own Association Dialogue Franco-Russe. Yakunin was sanctioned by the US Treasury “because of his official position in the Russian government [and because] he is also a close confidant of Putin”.

The French Member of Parliament Nicolas Dhuicq serves on the board of the Dialogue Franco-Russe. In February, Dhuicq was involved in a fake news story targeting French Presidential candidate Emmanuel Macron.

Sputnik ran an article headlined “Ex-French Economy Minister Macron Could Be ‘US Agent’ Lobbying Banks’ Interests”. Sputnik wrote that according to Dhuicq, “before announcing his bid for presidency, Macron had traveled to the United States. He allegedly conducted controversial political correspondence with former US presidential candidate Hillary Clinton, WikiLeaks founder Julian Assange told the Russian newspaper Izvstia on Friday.”

Dhuicq has also travelled to Russia, he visited the State Duma and shook hands with Russia’s Minister of Foreign Affairs Sergei Lavrov in December 2015.

Dhuicq was also seen at a gathering organised by the group Cercle Pouchkine. The group has hosted influential lectures, including a February 2017 talk by the Russian ambassador to France. Sponsors of the Cercle Pouchkine include Thierry Mariani, head of Yakunin’s Association Dialogue Franco-Russe.

Cercle Pouchkine was founded by Pierre Gentillet, a far-right Youth activist. Gentillet was interviewed by French-language Sputnik in 2014 after he published an article titled “Why France Must Choose Putin”.

On its website, Cercle Pouchkine says its objectives are to “contribute to the rapprochement between the two great French and Russian nations…promote the idea of a multipolar world through civil society” . 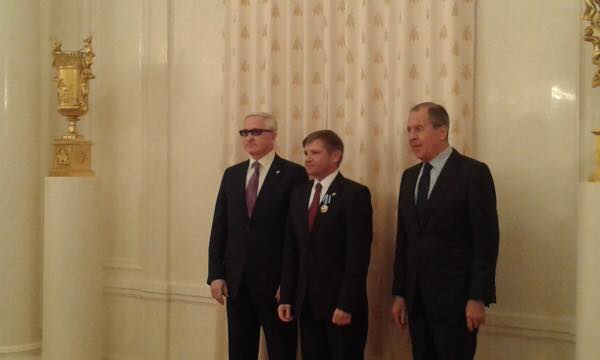 Earlier this month, the New York Times reported that the Dialogue Franco-Russe “seems to be making the case for lifting sanctions against Russia and promoting the Kremlin’s geopolitical views”. It also mentioned “according to the French secret services, the organisation is “infected” with the Russian foreign intelligence service”.

Under “members and partners”, the Dialogue list the French rail transport multinational Alstom: it lists contact information for the Alstom CEO Henry Poupart-Lafarge and President of Alstom Russia, Ukraine and Belarus Phillipe Pegorier.

In May 2014 Pegorier was elected as chairman of the Association of European Business (AEB) in Russia.

In April 2016 Pegorier posted a photo of himself and Lavrov wrote a message to members of the AEB, detailing his work towards rapprochement between Europe and Russia.

Pegorier has spoken out against the EU sanctions on Russia, and his statements have been picked up by RT. Pegorier left his position with the AEB, but is reportedly now in charge of relations with the Russian government for the French Republican Party in Russia.

In February, Izvestia published an interview with Alexis Tarrade, said to be the head of the Russian department at the French Republican Party and “representative of [French presidential candidate] Fillon” (Source).

The headline of the Izvestia piece read “Representative of Fillon: the groundwork for a dialogue with Moscow is in place”.

But links between Alstom and Russia do not end with Pegorier. A “Business Development Manager of the South CIS Cluster” of Alstom, Dimitry Lycett appears to have links with ex-SVR department head Leonid Reshetnikov – the former head of RISI and board member of Katehon. Leonid Reshetnikov (Foreground), the former of head of RISI and ex-SVR department head travelled to Limnos, Greece with the Executive President of the Dialogue Franco-Russe and Dimitry Lycett of Alstom

Lycett and his wife appear also appear to be friends with Vladimir Rodzianko, the co-founder of the pro-Kremlin fake news site The Duran, and the group have been photographed together at numerous social occasions. Rodzianko was also present at their wedding (Source).

The Lycetts’ wedding was also attended by Nicolas Troubetzkoi, of relation to the Executive President  of the Association Dialogue Franco-Russe Alexandre Troubetzkoi.

Other wedding guests included Lycett’s boss Pegorier, and Leonid Reshetnikov. Aleksandra, the youngest of Reshetnikov’s two daughters also “liked” some of the wedding photos on Facebook.

Reshetnikov, his daughter Elena, Alexandre Troubetzkoi and Dimtry Lycett also went on a trip together to Limnos, Greece.

Leonid Reshetnikov has a connection to this Island and has written a publication titled “Russian Limnos” focused around Orthodox Christianity.

We have seen evidence that the Kremlin wants to influence France to lift sanctions against Russia. This includes the efforts of officials like Vyacheslav Volodin and Leonid Slutsky who met with Presidential candidate Marine Le Pen to discuss this issue.

Presidential candidate Le Pen has also been targeted by pro-Putin activist Maria Katasonova, who has been promoting the idea of a “triptych” of Putin, Trump and Le Pen. Katasonova and her fellow activist Kovalenko appear to have engaged in “instruments of soft power and support to eurosceptics and opposition parties in Europe”,

The sanctioned billionaire Konstantin Malofeev’s Tsargrad and Katehon have produced articles on the French Elections. These include an endorsement from Malofeev business partner Philippe De Villiers who emphasized that France should work together with Russia.

Malofeev’s associate Leonid Reshetnikov headed the Russian Institute for Strategic Investigations (RISI) during the period it “prepared a plan to interfere in the 2016 US Presidential election”.

According to French secret services, the organisation is “infected” with the Russian foreign intelligence service”. The Executive President of the Association Dialogue Alexandre Troubetzkoi and Leonid Reshetnikov have links to key figures Alstom in Russia. Alstom is listed as a partner of the Dialoge Franco-Russe. The head of Alstom Russia Phillipe Pegorier is currently in charge of links between French Republican Party in Russia and the Russian government.