The Role of Sergey Dubinsky in the Downing of MH17

Following the publication of “Identifying Khmuryi, the Major General Linked to the Downing of MH17,” additional information has surfaced that further confirms the identity of Khmuryi as Sergey Nikolaevich Dubinsky, born August 9, 1962. The clearest confirmation of our investigation came courtesy of Russian actor Ivan Okhlobystin, who was photographed with Dubinsky on his Odnoklassniki profile. In a February 16, 2017 op-ed with RT (archive), Okhlobystin confirms that Sergey Dubinsky is indeed the separatist figure who went by the name Khmuryi and Petrovsky while serving under Igor “Strelkov” Girkin in Sloviansk and Donetsk.

“Sergey Dubinsky, with the call-sign Khmuryi — a respected Russian soldier, who honorably devoted his entire life to serve the Fatherland, even when his Fatherland entrusted him with senseless and harmful tasks in a period of social disorder in the mid-90s. He had already retired, but he was once again struck with bad luck: a coup took place in his native Ukraine, and as a soldier, he could do nothing except stand up in defense of the Constitution and joined up with the militia in Sloviansk under the flag of Strelkov.” 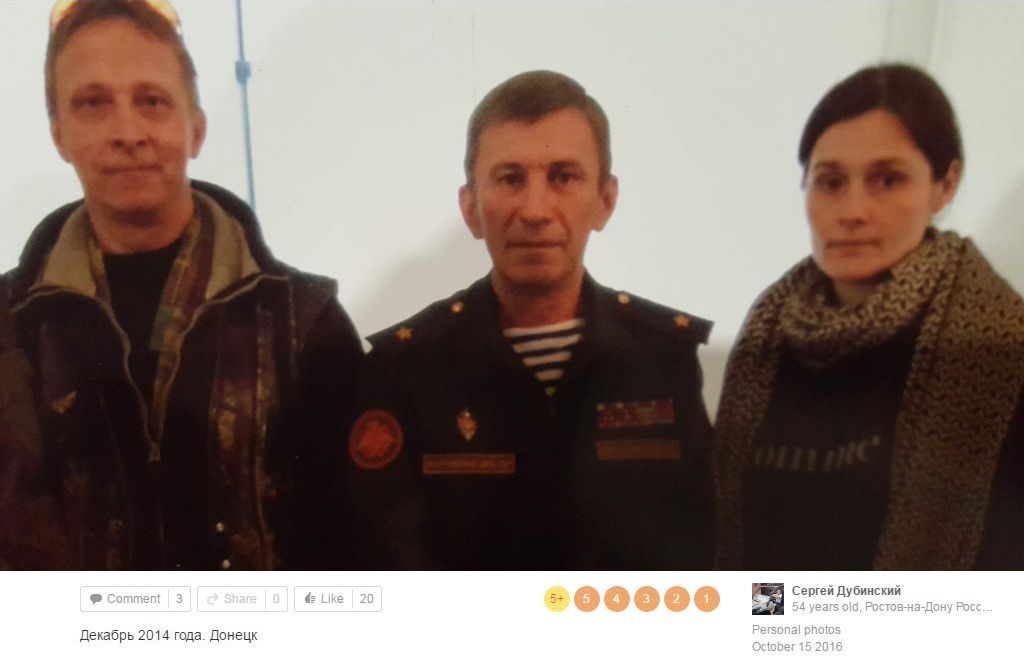 After the publication of our article, a number of readers commented on how Dubinsky had posted for some time on a message board at Glav.su, where he posted under the username “Нехороший” (Bad) in reference to the username “Bad Soldier” that he used in the Antikvariat forum. Numerous long-time users on the message board, including some separatists, confirmed the identity of Dubinsky/”Bad” in his time posting on the message board. He also made various posts that correspond with the biographical details of Dubinsky, such as an off-hand reference about his birthday that corresponds with Dubinsky’s birthday.

Additional information regarding Sergey “Khmuryi” Dubinsky has also emerged since the publication of our article. On February 18, 2017, InformNapalm published an article showing that Dubinsky joined a congress of the “Union of Donbas Volunteers,” which took place on November 4, 2016 in Moscow. Dubinsky himself gave comments to the BBC Russian Service in response to our article. Dubinsky did not refute his identity as Khmuryi, and instead claiming that a Ukrainian Buk was responsible for the downing of MH17, though the location provided by the Russian Ministry of Defense for this supposed Ukrainian Buk shootdown has been thoroughly debunked. 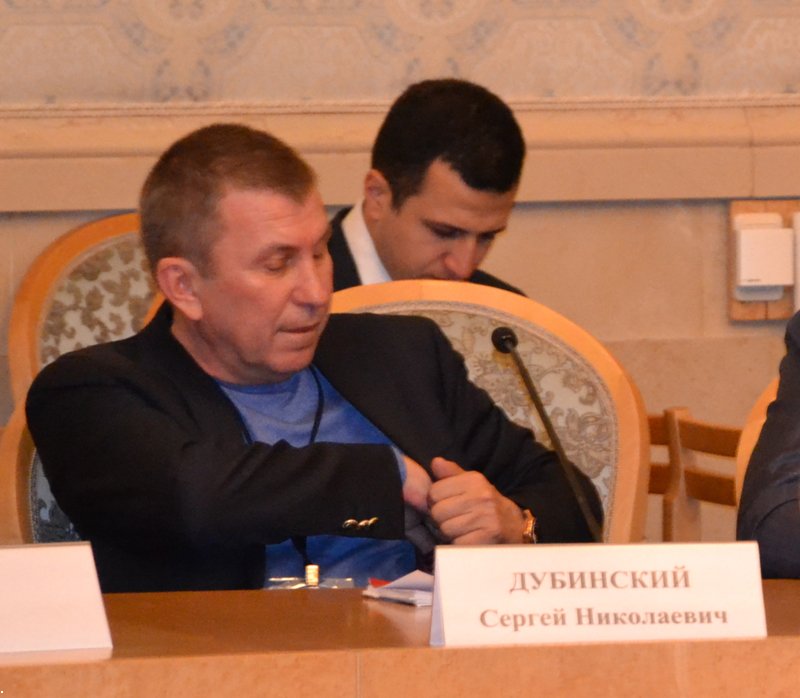 With Sergey Dubinsky’s identity as “Khmuryi” confirmed beyond all reasonable doubt, both in his additional discovered posts and confirmation from his friend Ivan Okhlobystin, we can now provide additional analysis regarding Dubinsky’s role in the transport of Buk 332 on July 17, 2014 through eastern Ukraine. As this analysis will show, Dubinsky was a key–or perhaps even the key–figure in organizing the transport of Buk 332 from Donetsk to a field south of Snizhne on the day of the tragedy. Furthermore, this additional analysis confirms the authenticity of the intercepted telephone conversations involving Dubinsky published by the SBU on July 18, 2014. Some details of these calls were previously under dispute or unclear, such as references to downed jets and Gvozdikas in a call between Dubinsky and “Botsman,” but a closer look reveals that even minor details in the calls can be verified through open source materials.

The following sections will provide both a summary and detailed analysis of the five calls involving Sergey “Khmuryi” Dubinsky published by both the SBU and JIT, along with additional commentary on some of the additional details provided in a slightly extended version of a call published by the JIT.

Dubinsky in Intercepted Calls Published by the SBU

Intercepted phone calls published by the Security Service of Ukraine (SBU) reveal numerous details about Dubinsky’s role around the transport of Russian Buk 332 on July 17, 2014. The day after the downing, the SBU identified Khmuryi (Dubinsky) as “Sergey Nikolayevich Petrovsky, born 1964, officer of the Russian GRU, Igor ‘Strelok’ Girkin’s deputy of intelligence, who was in Donetsk at the time of the intercept.” We now know that some of these details are true, and some are a bit off–namely, the year of birth (1962, not 1964) and his last name (Sergey Nikolayevich Dubinsky, not Petrovsky, which was his pseudonym in the DNR). Additionally, in one uploaded version of the conversations, the SBU duplicated information from a previous call (see summary of the fifth call). The SBU provides the number of the telephone that was intercepted: +38 063 121 3401. Two of the original videos published by the SBU can be accessed here (Ukrainian) and here (English). Dubinsky speaks at the following times in the video: 1:33 – 3:52, 4:15 – 5:22.

In the first conversation, Dubinsky speaks with “Buryatik,” a separatist soldier who has never been identified with certainty. Buryatik asks Dubinsky (Khmuryi) where to load a Buk-M1 (which is called a “beauty,” “Buk,” “B,” and “M” at different points), which was taken by Buryatik from an unidentified location to Donetsk. After asking where to unload and hide the Buk from the truck it was towed on, Buryatik confirms to Dubinsky that the Buk came with a crew. Dubinsky tells Buryatik that there is no need to unload and hide it, but instead said that it has to go “to there” now.

In the second phone conversation, which begins at 2:12 in the embedded video above, Dubinsky agains speaks with Buryatik. He asks if he brought one or two Buks. Buryatik explains that there was a mix-up with the transfer, as they did not have or were not willing to give/loan a second vehicle to transfer another Buk with. “They” unloaded the Buk from the truck they transported it on, and the Buk crossed the border on its own and was then transported with a truck. Dubinsky then tells Buryatik that the Buk will be going to its destination with tanks from the Vostok Battalion.

Dubinsky speaks with a different person, “Sanych,” in the third call, starting at 2:43 in the previous embedded video. The SBU describes him as a fighter of the DNR and a deputy of Khmuryi (Dubinsky). In the call, Dubinsky tells Sanych that “my Buk-M” will go with “your guys,” and that the Buk is on a transport vehicle now. He asks Sanych about where to take it to place it in a military convoy. Sanych says to take it to the Motel roundabout.

Dubinsky speaks with a new, unidentified person who is only described as a “DNR terrorist.” Dubinsky tells this person to call a man called “Bibliotekar” (The Librarian), and that he will find “you know what” at the Motel roundabout. The unidentified person affirms that he knows what “you know what” is. Dubinsky then instructs him to take “only those who came back, how ever many you need for the escort, and leave the rest behind here.” He then tells him to go to a spot near Pervomayskoe, and check a map for directions to the area. Once the unidentified soldier reaches the area near Pervomayskoe, Dubinsky tells him to set up and unload the remaining people he has with him. His tasks is to be in reserve and to guard the Buk-M that the person is transporting. He closes the call by saying that a man named Gyurza (The Viper) will also be at this location.

Summary of the fifth call:

The fifth and final call, from the late afternoon or evening of July 17, 2014, is between Dubinsky and “Botsman,” identified by the SBU as an officer of the Russian GRU. Dubinsky tells Botsman that “we are near Marinovka” and things are not going too well. He says that things aren’t so great because they are under constant Grad fire, and that they had recently shot down a Ukrainian Su-25 jet. He mentions that his forces received a Buk-M that morning and that things will be easier now. Dubinsky goes on to say that Ukrainians are trying to escape from Zelenopolye, but to break through they have to go through Dubinsky and his forces. He also mentions that “yesterday” (July 16) they shot down two Su-25s, and another today. At the end of the call, Dubinsky says that “in a couple of hours” he’s headed to Donetsk, and that three Gvozdikas are waiting for him in Donetsk. He will then take the Gvozdikas back to “here” (Marinovka).

“About 15 minutes ago, three Gvozdikas passed through the center of Makiivka in the direction of Khartsyzka. #stopterror” (Archived)

About 45 minutes later, seemingly the same convoy moved through Zuhres, headed eastward along the same route that the MH17 convoy travelled.

“A convoy of heavy equipment is headed towards Shakhtarsk, but it’s hard to tell what’s all in it from the darkness.”

“#Shakhtersk a convoy of heavy equipment is headed your way, it just passed by Zuhres”

Dubinsky in Additional Calls Published by the JIT

The Dutch-led Joint Investigation Team also published intercepted telephone calls, but with some information censored (names) and other information added. In the first call described here from 9:08am–in which Dubinsky speaks to Buryatik about unloading the Buk–there is an extra segment at the end.

Buryatik tells Dubinsky that “they need some time to take a look at [the Buk].” After this, we can hear some conversation in the background. Dubinsky seems to be receiving information in the background here regarding the destination of the Buk, and says “wait a second, Bibliotekar.” It is not entirely clear, but it seems as if Bibliotekar may have been in the same room as Dubinsky during this call at 9:08am on the morning of July 17. Considering how Dubinsky mentioned Bibliotekar in a call to Sanych soon after this one, it is logical to conclude that he received information on where to haul the Buk from Bibliotekar.

The JIT published additional phone calls between separatists that took place the morning after the downing, but the identities of those in the call were not formally established.

Following the downing of MH17, Russian/separatist forces scrambled to retrieve the black boxes from MH17. They did eventually find them and on July 2;1, 2014 handed them over in a press conference to Malaysian officials.

In an intercepted call from July 18, 2014 and released by the SBU on July 21, the head of the Vostok Battalion, Aleksandr Khodakovsky, speaks with a separatist soldier about retrieving key items from the MH17 crash site.

While still searching for the black boxes (Khodakovsky later mentions not knowing what they look like), he mentions that Khmuryi (Dubinsky) has a “key item,” which could be a black box. 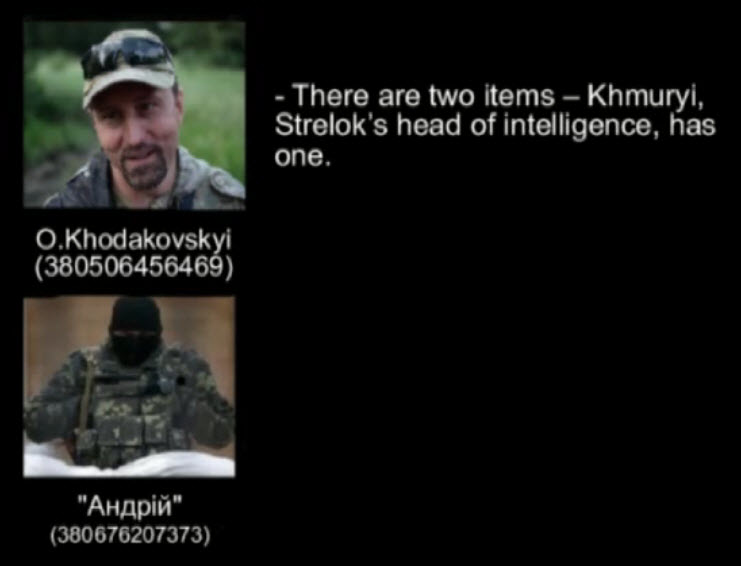 It is unclear what this item was, but it is clear that Sergey Dubinsky was a key organizer in efforts to find materials related to MH17 at the crash site–with an emphasis that people from “Moscow” want them secured, and that these items “do not come into somebody else’s hands.”

This article was collaboratively researched and written by the Bellingcat  MH17 Investigation Team, with contributions from the Conflict Intelligence Team.