Tracking the Vehicle that Transported the MH17 Buk

Thanks to the generous donations of our supporters last month, Bellingcat was able to purchase 25 square kilometers of satellite imagery from Digital Globe. Our latest report used this imagery to definitively demonstrate that the Russian Ministry of Defense (MoD) falsely dated satellite photos it presented to the international community in the days after the MH17 tragedy last year in order to implicate Ukraine. Now, we will use the same Digital Globe imagery to show that the low-loader that hauled the Buk linked with the downing of MH17 was in fact absent from its vehicle yard when it was photographed by Paris Match on the morning of 17 July 2014.

On 25 July 2014, eight days after MH17 was shot down by a Buk missile system over eastern Ukraine, the French weekly Paris Match published a photograph of a red and white low-loader transporting a Buk through the separatist-controlled city of Donetsk. Subsequent geolocation confirmed that the low-loader hauling the Buk was headed east on the H21 highway. Inquiries by Storyful established that the photograph was taken at “about 11 a.m. on the morning of July 17”; shadows cast by the vehicle are consistent with this time of day. Paris Match also confirmed that this was the best quality version of the image available.

Using the phone number on the side of the low-loader, Paris Match contacted the owner of the vehicle rental company, who claimed that the low-loader had been stolen by separatists who had occupied his warehouses since 8 July and that the vehicle was unique in the region. The phone number was also used to track down the exact location of the company, which is located in Donetsk.

Historical Google Earth imagery shows that the low-loader can be seen in the vehicle yard facing north on 2 July 2014, while on 21 July 2014, it has clearly moved and can be seen facing east. 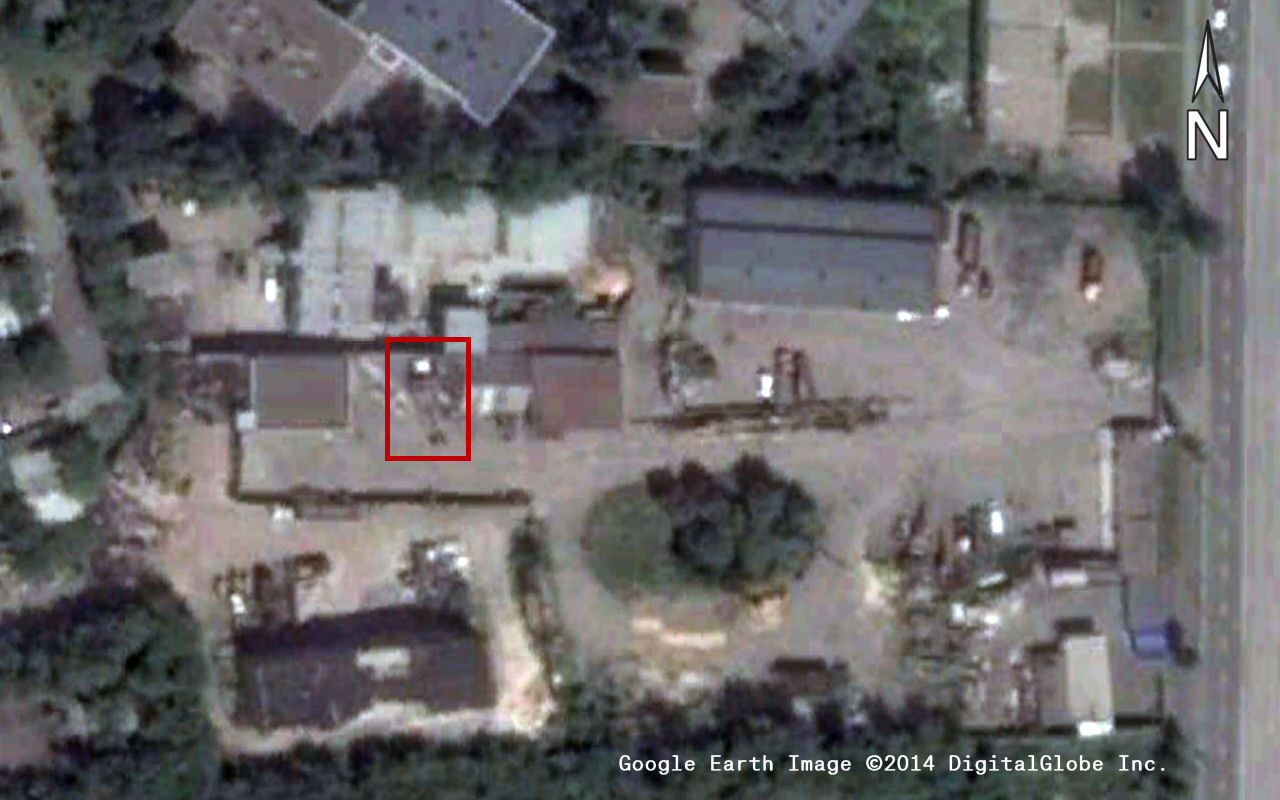 The new Digital Globe imagery Bellingcat has purchased shows that at 11:08 a.m. (local time) on 17 July 2014, the low-loader was not present in the vehicle yard, as would be expected if Paris Match photographed the low-loader heading out of Donetsk on H21 around 11 a.m. Here is the new imagery compared with the most proximate Google Earth imagery available (taken 2 July): 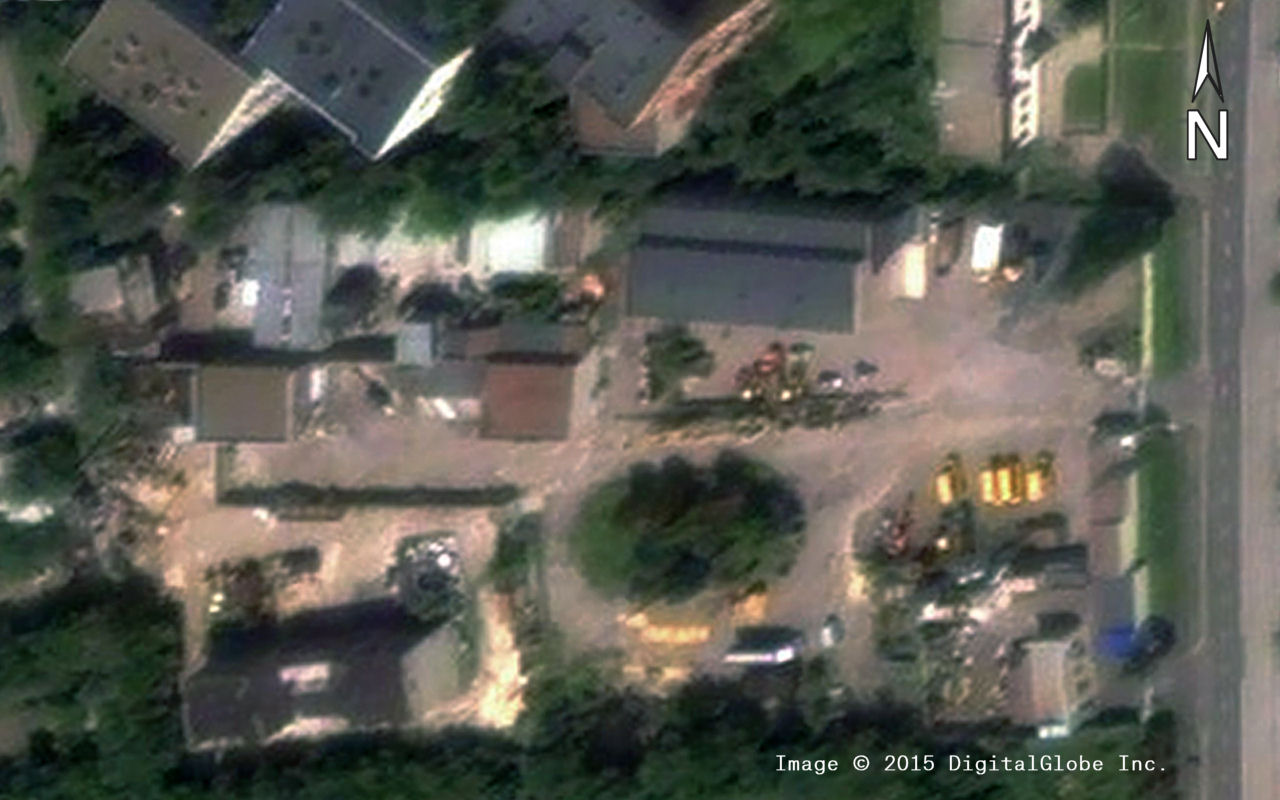 The low-loader’s absence from the vehicle yard at this time is consistent with the timeline of events in the hours before the downing of MH17, as documented in various social media postings, which have been verified by Bellingcat and others.

After being spotted heading east on the H21 highway by Paris Match photographers around 11 a.m., the low-loader was subsequently filmed roughly 36 kilometers farther east on H21 in the town of Zuhres, reportedly at 11:40 a.m. 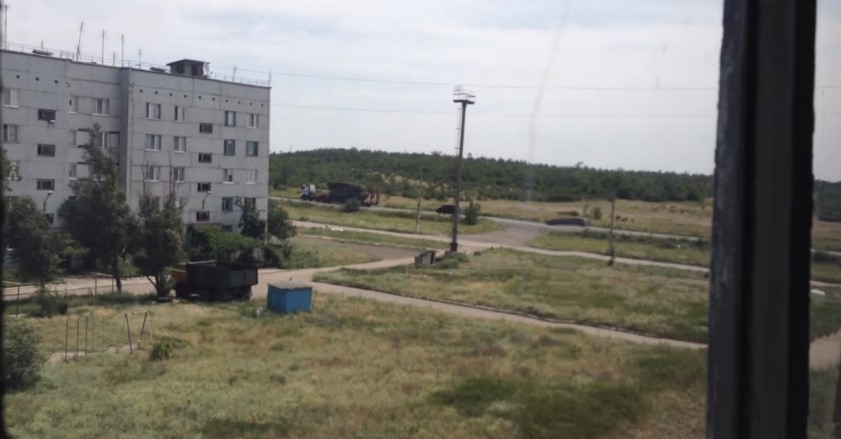 The low-loader was then photographed roughly 25 kilometers east of Zuhres in Torez, at approximately 12:30 p.m., this time with camouflage netting over the Buk. While a photograph and a video posted to YouTube showed the Buk driving under its own power in the town of Snizhne at approximately 1:30 p.m., the low-loader was once again seen hauling the Buk through separatist-controlled Luhansk, reportedly on the morning of 18 July, in a video posted by the Ukrainian Ministry of Interior. Indeed, the Buk can be seen missing one of its 9M38M1 missiles.

With these sightings, it is possible to surmise the most likely route taken by the low-loader. A portion of this route can be seen in the full Digital Globe preview imagery from which the crowdfunded portion was purchased. This full Donetsk image from Digital Globe – which, after purchasing the imagery, we know was taken at 11:08 a.m. – extends roughly one-third of the way to the town of Zuhres. Based on the time of the Donetsk satellite image and the time the Buk was seen in Zuhres (11:40 a.m.), we judged that there was a reasonable possibility that the Buk and low-loader would be visible in the satellite imagery. In order to find out, we crowdfunded the purchase of another sliver of the Digital Globe imagery, this time showing the route depicted above. Unfortunately, the low-loader could not be seen in this image. (We, therefore, will not seek funding for the additional $1,500 required to publish the image.) There are two plausible reasons as to why this may be. First, while the imagery is by and large clear for large stretches of the route, there are not insignificant sections of road that are obscured by either cloud cover or the tree line. Second, the assumption that the Buk would be visible was based upon a number of unknown factors that may have affected the low-loader’s travel time, including the speed of the low-loader, the heaviness of the traffic, and whether any stops were made.

On 30 March 2015, the Joint Investigation Team investigating the cause of the downing of MH17 released a video calling for witnesses in eastern Ukraine to come forward with information regarding the transport of a Buk anti-aircraft system through eastern Ukraine. The JIT video also featured three previously unpublished intercepted phone calls in which separatists discuss a Volvo low-loader truck hauling a Buk from Snizhne to Russian territory shortly after the MH17 shootdown. Two of these calls take place between 8 a.m. and 8:30 a.m. on 18 July 2014, the morning after the downing of MH17 and a few hours after the Buk and Volvo low-loader truck were filmed in Luhansk headed east. The individuals in these two calls can be heard discussing, among other things, the whereabouts of the low-loader (or “lowboy”), which was apparently transported into Russia. 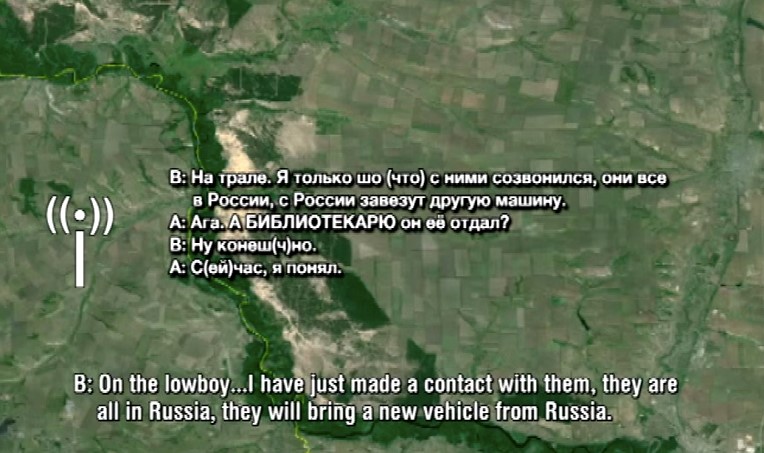 While the low-loader was taken to Russia on 18 July, it returned to eastern Ukraine shortly thereafter and could be seen being used by separatists to transport military equipment. In a photograph shared on 6 August 2014, the low-loader can be seen transporting a BMP infantry fighting vehicle through the streets of Makiivka, just east of Donetsk. Later that month, on 26 August 2014, a photograph and video of an identical low-loader were posted online. The video featured a woman who had appeared in previous separatist-filmed videos, and it appears that the low-loader was being used to transport a damaged vehicle.

Once again, historical Google Earth satellite imagery shows the low-loader in the yard on 9 August, while on 3 September it has since clearly moved. 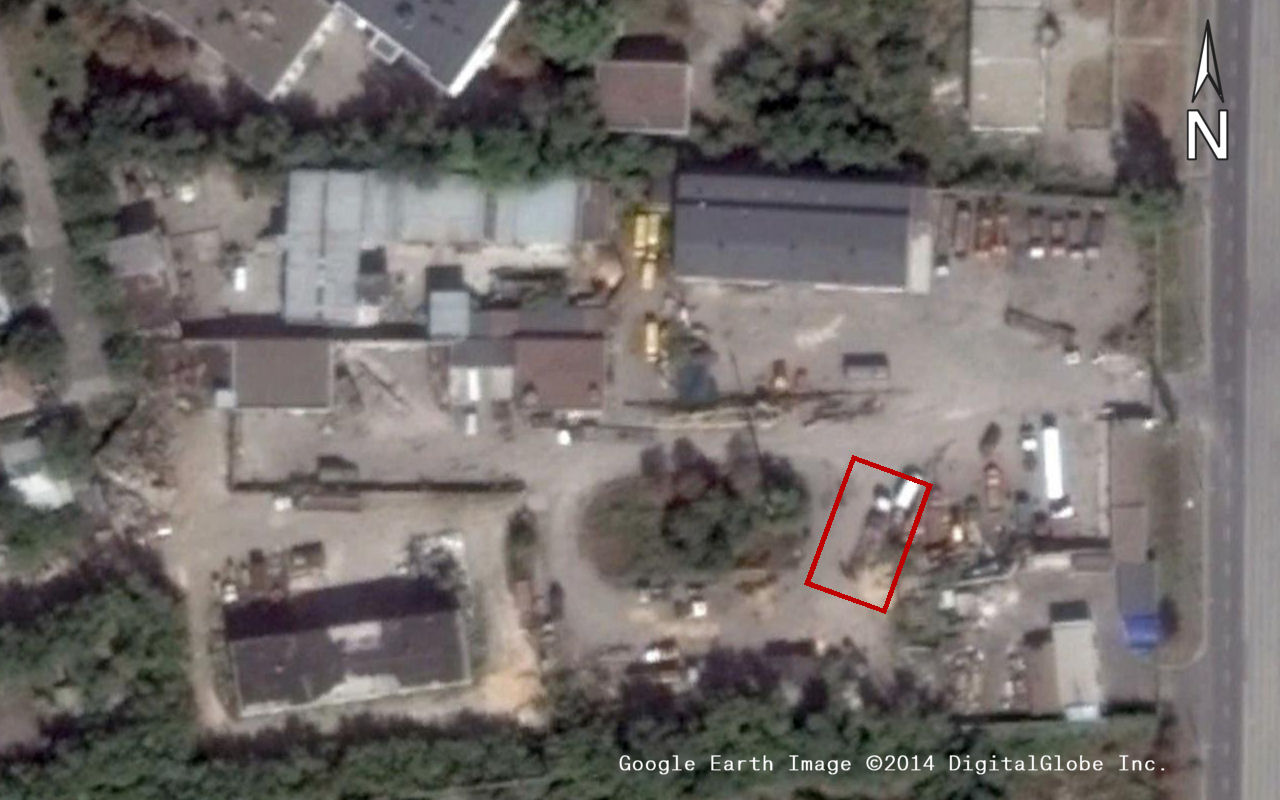 The PDF version of this piece is available in English and Russian.