On March 30, the Joint Investigation Team investigating the cause of the downing of MH17 released a video calling for witnesses in eastern Ukraine to come forward with information regarding the transport of a Buk anti-aircraft system through eastern Ukraine on July 17th (the day of the MH17 crash) and 18th, 2014. In the video, the Joint Investigation Team summarize the path of the Buk from Donetsk, through Zuhres and Torez to Snizhne, to Luhansk, and back to Russia with photographs and videos of the Buk along with intercepted phone calls between separatists. The majority of this information has been long known, as can be found in Bellingcat’s November report on the Buk system that likely shot down MH17. However, this video also provides us with new information that further implicates Russia and the separatists with whom it collaborated in the form of intercepted phone calls placed after the downing of MH17. In these three previously unpublished phone calls, separatists discuss a Volvo low-loader truck hauling a Buk from Snizhne to Russian territory shortly after the MH17 shootdown.

Along with the newly published phone conversations, the Joint Investigation Team video confirms previous facts vital in determining the cause and culpability of the MH17 tragedy. The video, along with a description on the JIT website, confirm the following facts that were also recapped in the November Bellingcat report:

The new information, which has largely been speculated upon before this video, concerns the location of the Buk before being photographed in Donetsk and after the shootdown of MH17.

The Joint Investigation Team has determined that the Buk was likely transported from Sjevernyi, Ukraine in the Luhansk oblast, through Luhansk, and into Donetsk. This transit took place overnight between July 16 and 17, though the exact route is not clear, as the video highlights a few possible alternate routes near Luhansk. The Joint Investigation Team does not speculate where the Buk was located before reaching Sjevernyi; however, the town is located less than a kilometer from the Russian border, raising obvious questions. 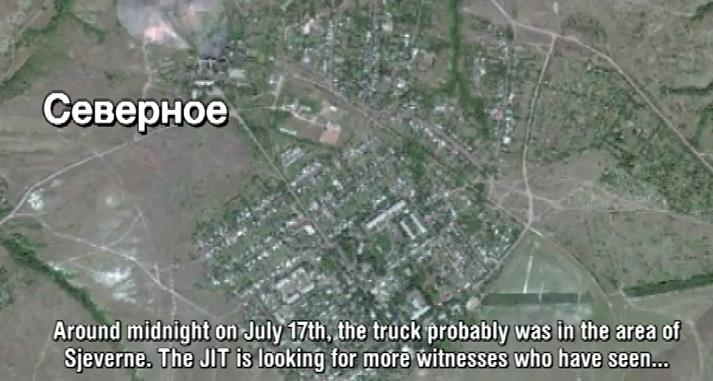 There are three additional calls that the Joint Investigation Team referred to, all of which occurred after the downing of MH17. The first took place at 9:32pm, approximately 5 hours after the MH17 crash, between two separatists. This call concerns how one of the crew members accompanying the Buk was left behind at a checkpoint east of Snizhne. The Joint Investigation Team is requesting any additional information available regarding the location of this checkpoint and petrol station, along with the identity of this crew member. There are a few errors in the English and small parts of the phone calls that are not included in the transcript, which are also not included in the below transcript. Additionally, the Joint Investigation Team redacted the names in the phone call, instead marking them as (…), and the transcript selectively marked expletives used in the phone calls. None of the expletives, excluded parts of conversations, or minor errors change the essential content of the phone calls from the original Russian.

B: Hello, commander. Have you already left, yes?

B: I got it. Within that very region or not?

A: No. I’m not within that region. I’m [going to] to the other direction.

B: Here he is standing at the checkpoint.

A:  Take him and bring in here, (expletive). I’ll be waiting for him in Snizhne near the petrol station.

The other two intercepted calls took place at approximately 8:00am and 8:20am on July 18, the morning after the downing of MH17 and a few hours after the Buk and Volvo low-loader truck were filmed in Luhansk headed east.

A: Good morning, (…) Yesterday was a (expletive) mess, I have nothing to say.

A: Where, is, whatsit (expletive) err…Why did your comrade (…) return. Incomprehensible such movements. I don’t know what was going on yesterday, tell me!

B: They brought the car [note: Every time car or vehicle is referred to in these transcript, the original word used is машина / mashina, which can refer to any vehicle, truck, or a machine. This word is likely referring to either the Volvo truck or the Buk] till crossroad, left it there, the lads went on themselves.

B: So, the car was going in the correct direction and arrived successfully.

B: There were strange incoming calls which began suddenly, from 10 persons.

B: Err. There were different incoming calls got him on the phone from people who begun (sic) to introduce themselves…err…One and then the second, then the third, then the fourth…he told me that he had pissed off…later, (…) begun to phone up.

A: And he turned of (sic) his telephone. (Expletive) of a mess.. err… and we don’t know at all where is the car.

B: The car is in Russia.

A: (Expletive) shit… err…yesterday I [said] (expletive) that we didn’t know.

Twenty minutes later, a second call is placed between the same two people in the previous call (A and B).

A: (…), you should take (…), and come to my place, there is no …car, no one saw it (expletive). That one, which had gone to meet it… returned back without the car, you know what I mean. Where? Whom? Which way did he bring it? (Expletive) disaster, you know…

B: And what about Bibliotekar [note: “The Librarian”]? This is that group of people transported it.

B: On the lowboy [note: The Volvo low-loader truck]. I have just made a (sic) contact with them, they are all in Russia, they will bring a new vehicle [note: Same word – машина – used as in the previous translation to “car”] from Russia.

There are several facts to be extracted from these calls, including the following, which were not included in the November Bellingcat report and only partially speculated upon from other open source investigations:

This new video is the strongest indication yet from the Joint Investigation Team that the Buk photographed and filmed in eastern Ukraine on July 17 and 18 is the culprit of the tragedy. While the Joint Investigation Team has not explicitly ruled out other scenarios, it is telling that they have called upon witnesses in eastern Ukraine for more information while disclosing specific photographs, videos, and intercepted phone calls that all point to the same culprits.