Who's Lying? An In-depth Analysis of the Luhansk Buk Video

On July 21st 2014, only a few days after Flight MH17 was shot down in Eastern Ukraine, the Russian Ministry of Defence held a lengthy press conference, detailing what they claimed to be evidence of who was responsible for the downing of Flight MH17.

The claims included evidence of Flight MH17 significantly altering its course, radar data that showed an aircraft close to Flight MH17, satellite images of Ukrainian Buk missile launcher in the area on July 17th, and a video of a Buk missile launcher shared by the Ukrainian Ministry of Interior that the Russian Ministry of Defence claimed was presenting false information about its location.

One claim in particular was hotly debated. A video showing a Buk missile launcher was shared online by the Ukrainian Ministry of Interior on July 18th, reportedly filmed on the morning of July 18th. 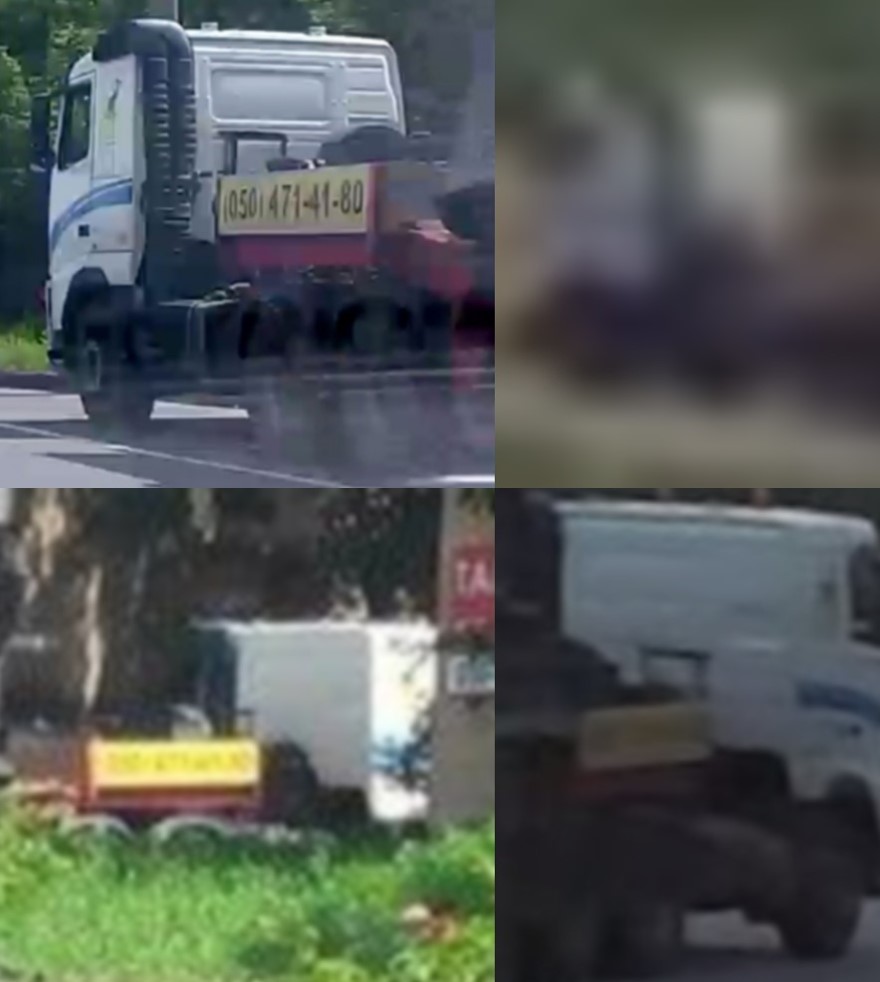 However, the Russian Ministry of Defence disagreed. They claimed the video has been recorded elsewhere, showing a location in government held territory.

“For example, media circulated a video supposedly showing a Buk system being moved from Ukraine to Russia. This is clearly a fabrication. This video was made in the town of Krasnoarmeisk, as evidenced by the billboard you see in the background, advertising a car dealership at 34 Dnepropetrovsk Street. Krasnoarmeysk has been controlled by the Ukrainian military since May 11”

The Russian Ministry of Defence displayed the following image showing what they claimed the billboard said. 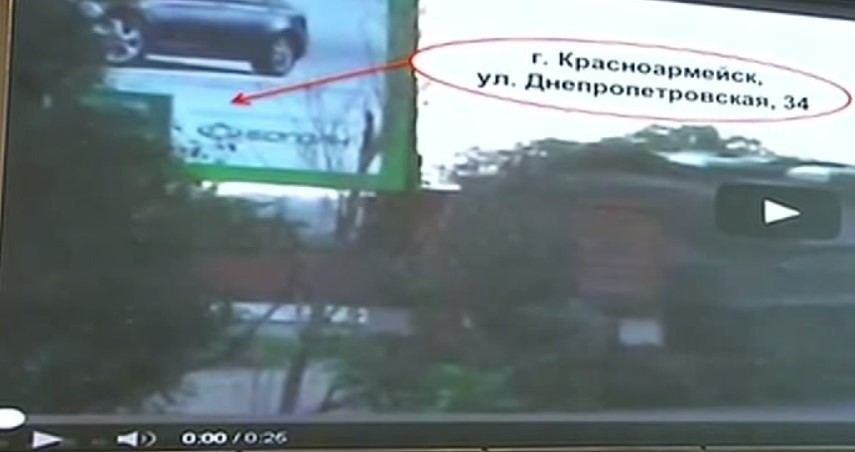 So on one side the Ukrainian Ministry of Interior is claiming the video shows the Buk heading towards Russia, while the Russian Ministry of Defence is claiming the video was filmed in territory controlled by the Ukrainian government, which is especially significant as the truck and low-loader is clearly the same one seen travelling through separatists held territory on July 17th.

Unfortunately for the Russian Ministry of Defence something that would have been at one time very difficult to prove is now, thanks to the internet, just a matter of looking in the right places. On July 22nd the following images were shared on Twitter, claiming to show the exact location the video was filmed in separatists controlled Luhansk, close to the Russian border.

Using a variety of online resources it is possible to confirm that this is the correct location. A website with feeds for traffic cameras in Luhansk included a camera pointing directly at the location that the Buk travelled through. Traffic cameras in Luhansk had been shut down a week before July 17th, but preview images from the cameras were still available. It should be noted since Bellingcat published its original work on the Luhansk Buk video the traffic camera site has been shut down for unknown reasons, but was archived on July 17th, where the preview image is still visible. The traffic camera is positioned to the right of the location of the camera in the Buk video, which was pointing across the top of the trees in the bottom left corner of the picture towards the billboards and intersection. Clearly visible is a billboard with the same car advertisement and green border visible in the Buk video.

Billboards are not unique, but it’s also possible to explore the area using other resources. While Google Street View is a well known service for exploring ground level imagery of towns and cities, Yandex Maps also offers a similar service, which, unlike Google Street View, covers Luhansk, including the area visible in the Buk video. The imagery from the area is a few years old, and the billboards are recent additions to the area, so are not visible in the street view imagery from Yandex Maps. 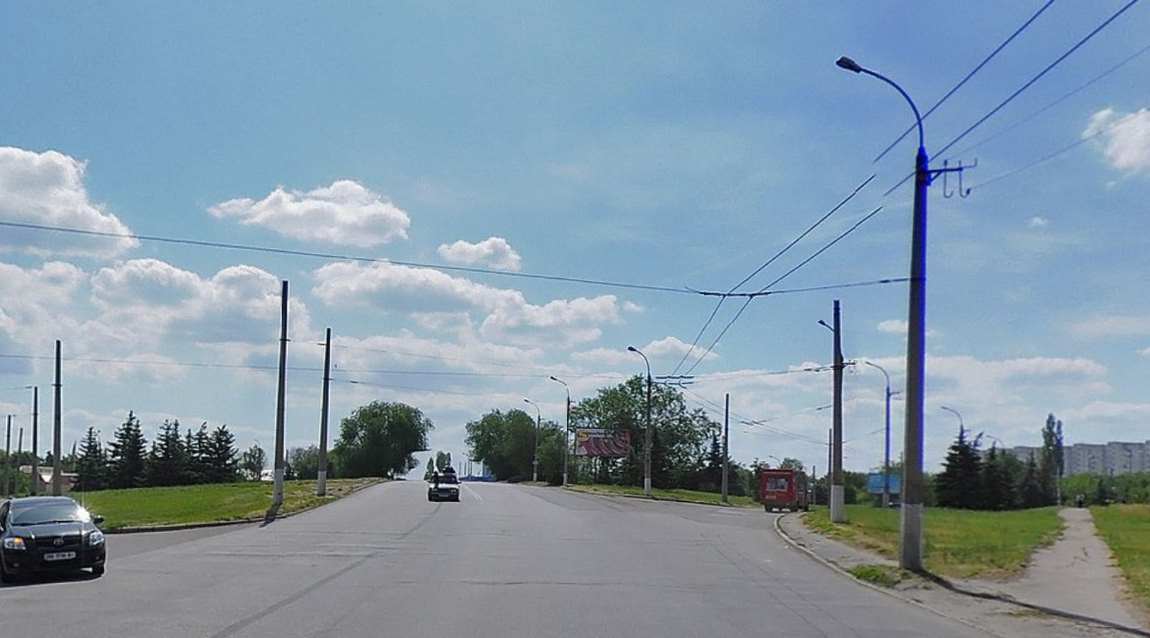 The absence of billboards in the area is apparent in historical satellite imagery of the area from 2011 visible in Google Earth, with the earliest dated Google Earth imagery available showing them in March 2014. 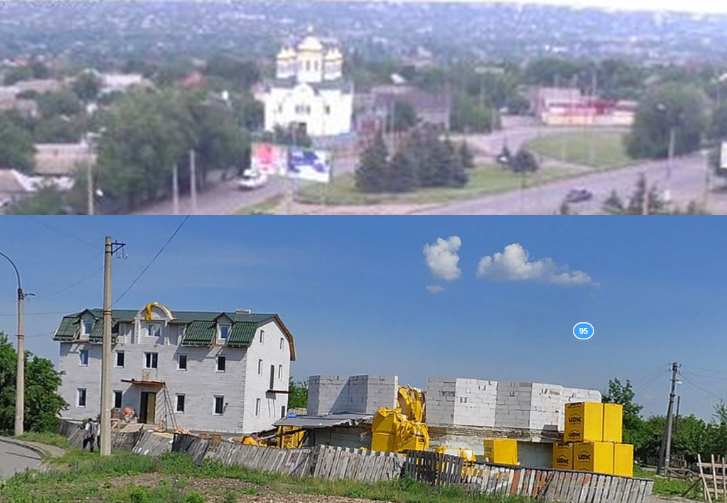 Of particular interest is a set of buildings with silver and red roofs near to the church, visible in the traffic camera image to the right of the church. In the Buk video it’s possible to make out the red and silver roofs, as well as a red and silver chimney, matching perfectly with these buildings. 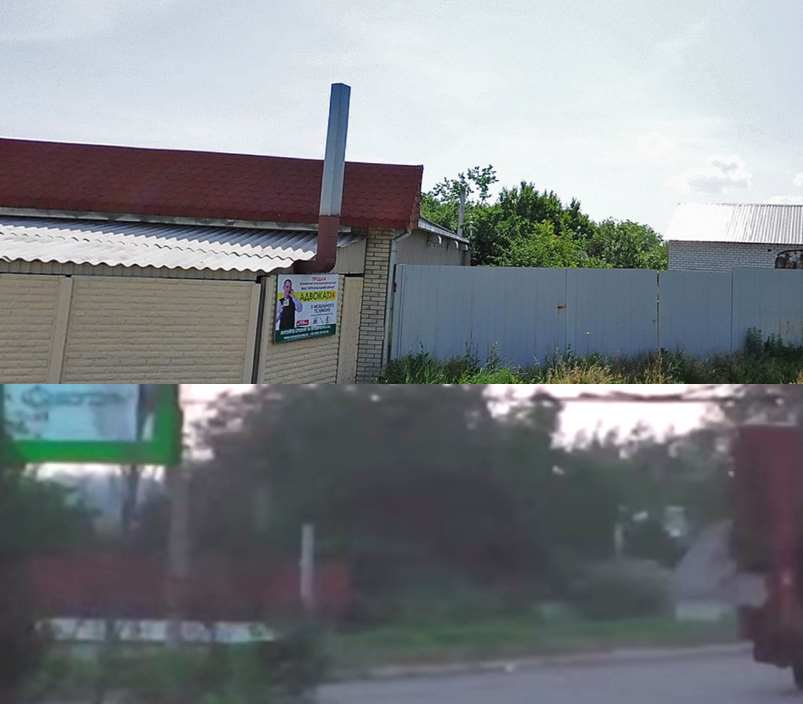 In addition to these matches a Luhansk local visited the site and took various photographs which were then shared on Livejournal, including a clear photograph of the billboards in the area and the local church. 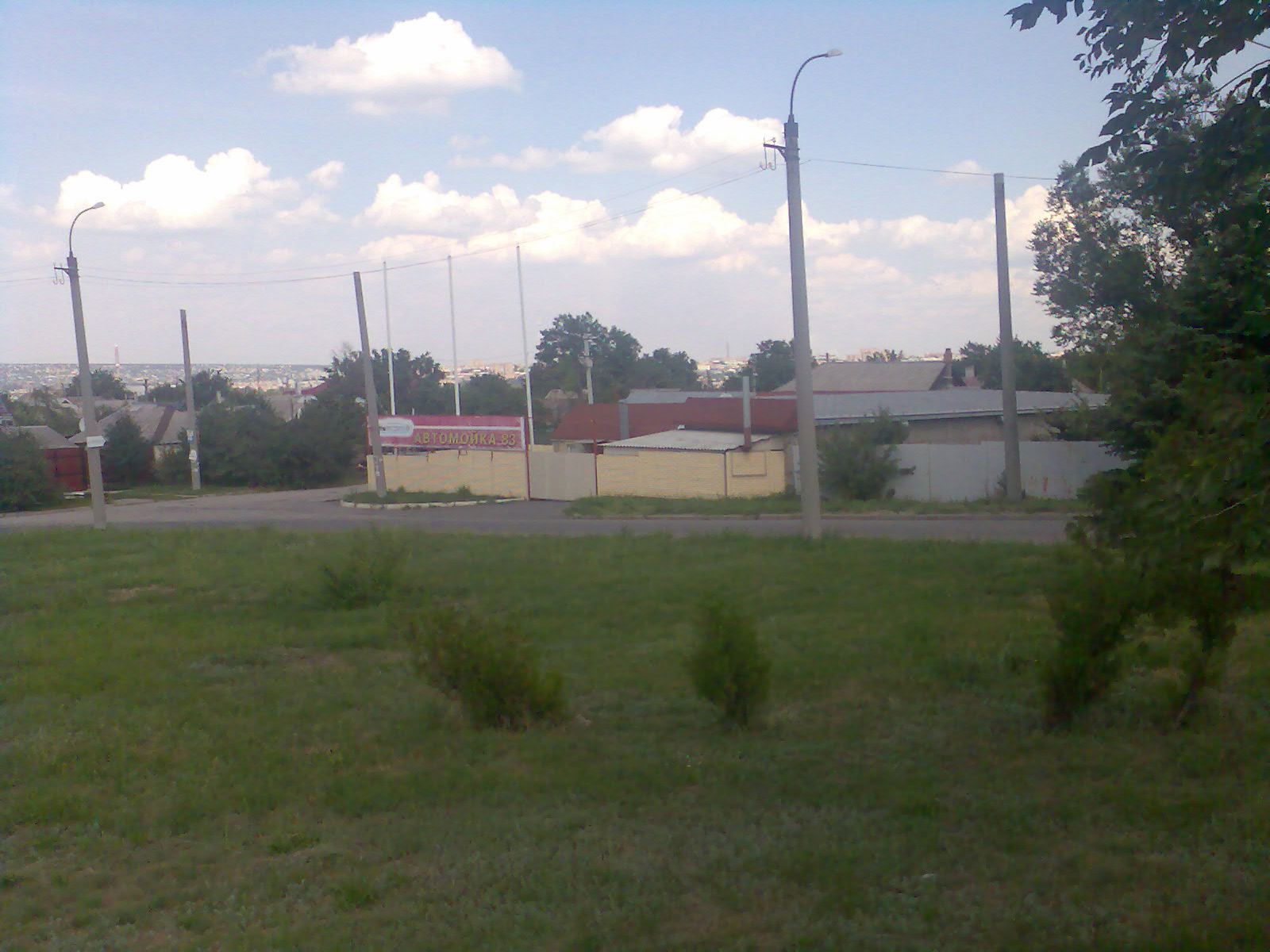 These images allowed smaller details in the video to be matched, such as the detail on the lamp posts, and shape of the curb. Another image of the area is available on Panoramio, described as being taken on October 12, 2013, and showing a position closer to that of the position in the Buk video. 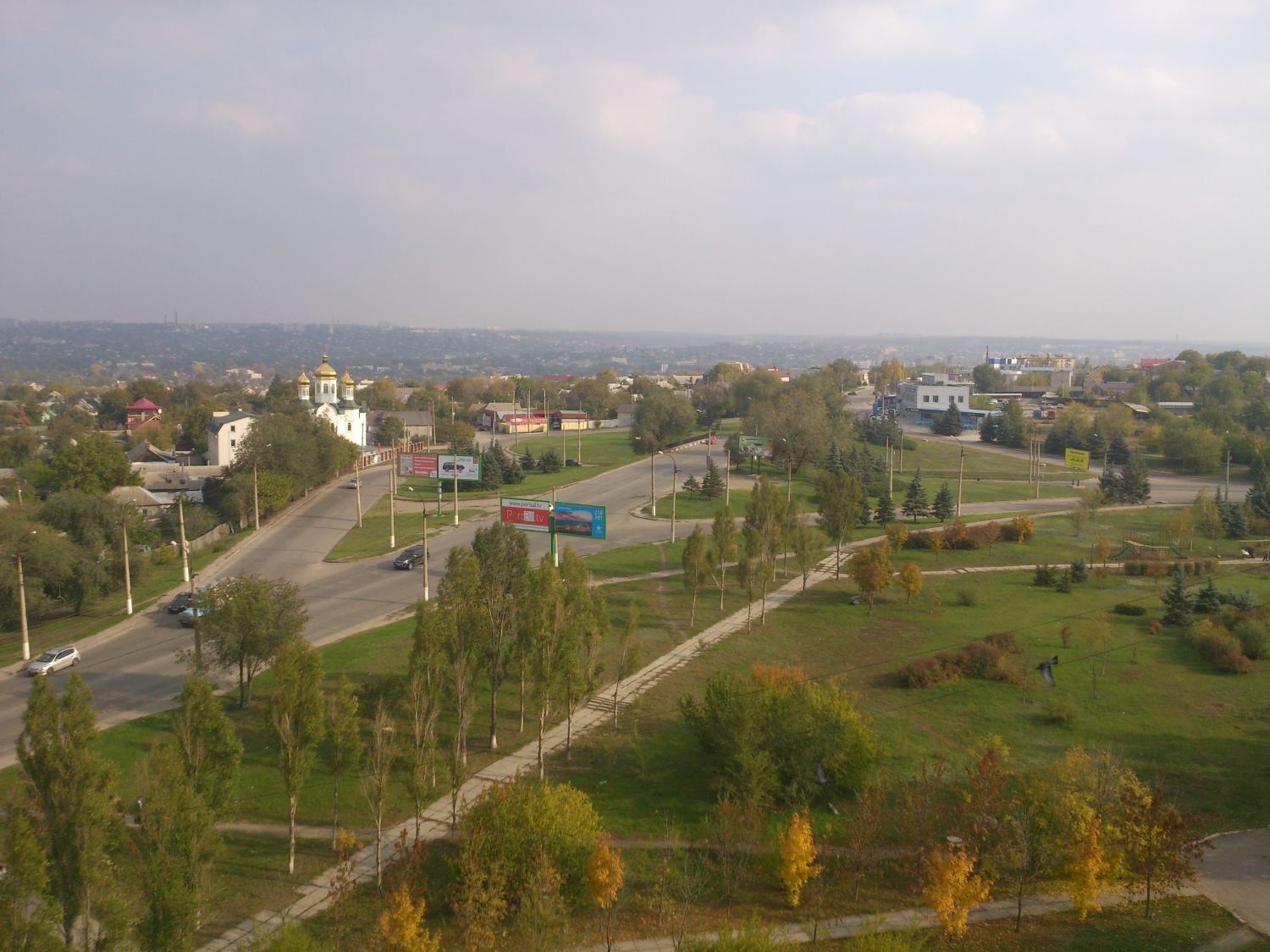 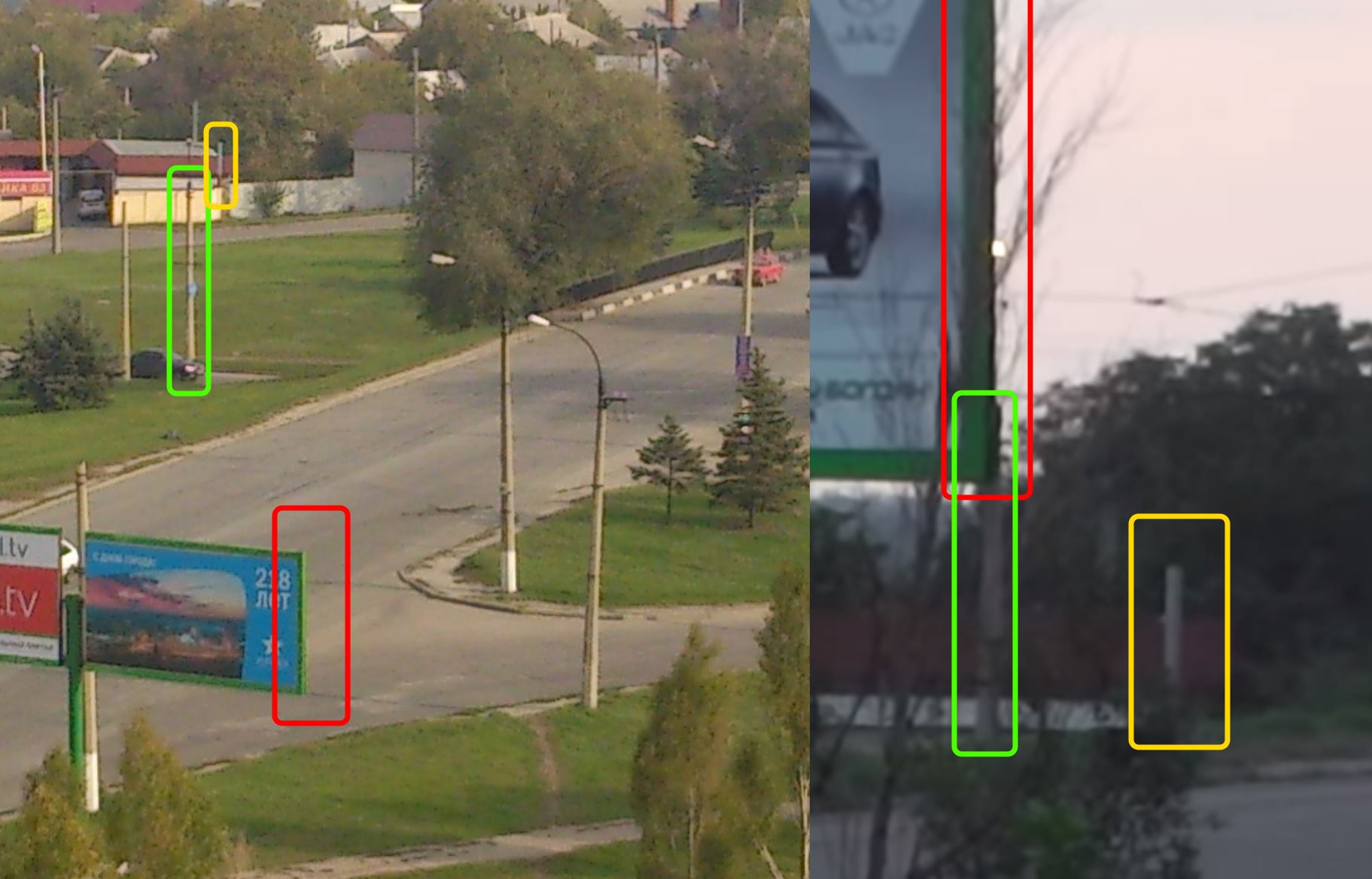 As we can see, to match the position in the Buk video the camera position in the photograph would need to move to the right for the right side of the billboard to line up with the pole, resulting in the chimney appearing to the right of the billboard and pole. That would also mean the tree marked in green in the below image would appear further to the left in the Buk video, obscuring more of the building marked in pink. It’s also possible to make out the pole visible in the Buk video in exactly the right position in the Panoramio photograph. And near the pole the cable connectors visible in the Buk video. Yandex Maps street view imagery can be used again to show us the position of the Buk video camera from the junction where the Buk was filmed. This image shows apartments overlooking the trees visible in the Luhansk Buk video, further confirming this is the correct location. The Russian Ministry of Defence had claimed “This video was made in the town of Krasnoarmeisk, as evidenced by the billboard you see in the background, advertising a car dealership at 34 Dnepropetrovsk Street.”, but this is clearly untrue, the photographs taken of the billboard clearly show it says something completely different from what is claimed by the Russian Ministry of Defence. This appears to have been a frustrating piece of evidence for someone, when Correctiv visited the site several months later the billboard had suffered a very specific piece of vandalism. Although most of the billboards have been stripped, it’s still possible to make out parts of the advertisements that were on them on July 17th. One example is the billboard that was partly obscured in the video, and photographed by the Luhansk local In response to Parry’s initial accusations 60 Minutes Australia showed footage of the pole visible in the Buk video, that was also photographed by the Luhansk local, that also clearly matches. Cables in the Buk video are also visible in the video from 60 Minutes Australia, with the black connectors (boxed in red) and the cable connected to the distinctive pole (boxed in green) visible in both sets of footage. In a piece of footage filmed as they approach the location a distinctive building is visible, which is also visible on street view imagery of the area.

This building is next to the red and silver roofed buildings and the red chimney visible in the Buk video.

Moments later after the grey roofed building is visible the church that’s nearby is also visible. 60 Minutes also filmed the church in other shots, clearly showing that this is the correct location. As we can clearly see, despite accusations by Robert Parry that 60 Minutes Australia was “engaged in a wilful fraud“, 60 Minutes Australia had in fact visited exactly the same site shown in the Luhansk Buk video, further confirming the Russian Ministry of Defence lied about the video at their July 21st press conference.

But this is just one of the lies and fabrications presented by the Russian Ministry of Defence in their July 21st press conference. Radar data presented, supposedly showing an aircraft near MH17 appearing on radar moments after it was shot down almost certainly showed instead the debris of MH17 as it broke up over Ukraine. The claim that MH17 was redirected from its flight path was shown to be utterly untrue, based on data released by the Dutch Safety Board investigation into the downing of Flight MH17.

From this it is clear that the reaction of the Russian government to the downing of Flight MH17 was to create a series of untruths and fabrications, and to present them to the world, including the families of those killed on July 17th. In addition to the above examples Bellingcat will soon be releasing a detailed report clearly demonstrating more of the evidence presented at the July 21st press conference was fabricated.

It is also clear that open source and social media investigation can play a major role in debunking lies and propaganda, and empowers anyone to find the truth, even when powerful governments attempt to obscure it.