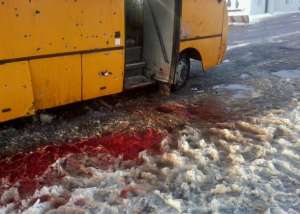 This handout picture taken and released on January 13, 2015 by Anti-Terrorist Operation (ATO) press service shows snow covered with blood and a damaged bus after it was hit by a long-range Grad rocket apparently fired by pro-Russian insurgents in Volnovakha. Ten Ukrainian civilians were killed and nearly 20 injured in the attack. Local police said the rocket appeared to have gone astray after being aimed by the gunmen at a checkpoint set up by government soldiers on the main highway connecting the rebel stronghold of Donetsk with Ukraine’s southeastern coast on the Sea of Azov. AFP PHOTO/ HO/ ANTI-TERRORISTS OPERATION (ATO) PRESS SERVICE / STRINGER
= RESTRICTED TO EDITORIAL USE — MANDATORY CREDIT ” AFP PHOTO/ HO/ ANTI-TERRORIST OPERATION (ATO) PRESS SERVICE / STRINGER – NO MARKETING – NO ADVERTISING CAMPAIGNS — DISTRIBUTED AS A SERVICE TO CLIENTS