Chemical Weapons and Absurdity: The Disinformation Campaign Against the White Helmets

A joint report in collaboration with Newsy

The Syrian Civil Defence (SCD), also known as the White Helmets, is a search-and-rescue organisation based in opposition-held areas. They have recorded some of the worst atrocities carried out in Syria and provided vital evidence of gross human rights abuses by the Syrian government and the Russian military. This has made them the target of a significant disinformation campaign attempting to smear them as “terrorists,” with some pro-government supporters claiming they are “legitimate targets.”

During mid-2018 this disinformation campaign appears to have focused on attempting to associate the SCD with chemical attacks in Idlib. From August to November of this year, the Russian and Syrian governments and state-controlled media continually repeated narratives involving the SCD and movement, or use of, chemical weapons around rebel-held areas of north-western Syria, primarily Idlib. This article will examine the accusations made against the SCD in Idlib and assess the evidence provided. The information we collected can be found here.

It should be noted that no reputable body has ever found that SCD was involved in any chemical incidents in Syria in any capacity other than as first responders to attacks. However, the Syrian government has been identified as the perpetrator in 23 Chlorine and Sarin attacks and has likely been involved in many more.  Both Russia and Syria have a dubious reputation for factual reporting on the issue of chemical weapons due to their accusations of vast international conspiracies, use of doctored satellite images and tendency to present videos and images from computer games as evidence. 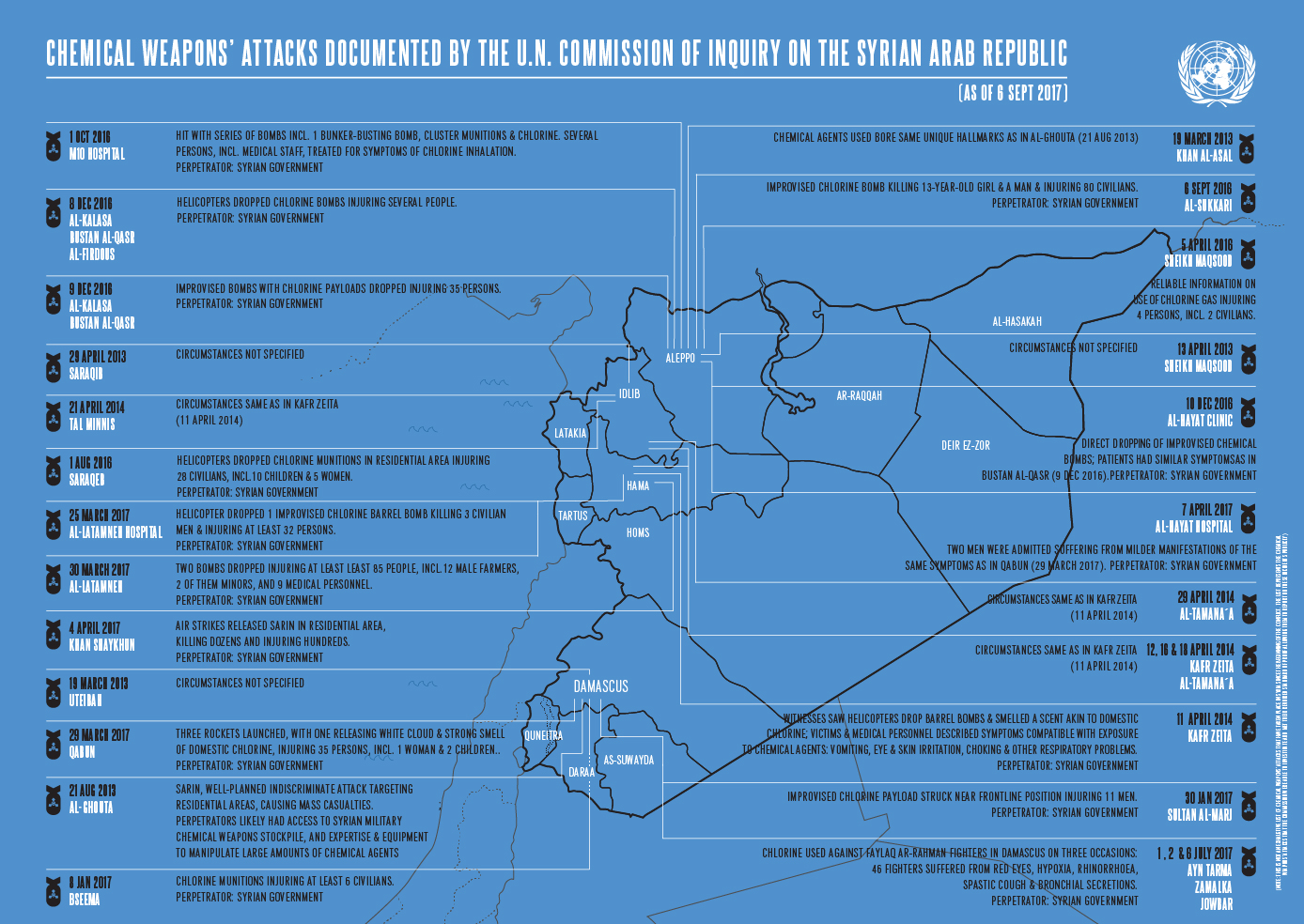 Image 1: Chemical Attacks in Syria, along with perpetrators, according to the UN Commission of Inquiry on the Syrian Arab Republic

Bellingcat has identified 22 separate accusations relating to the use or transportation of chemical weapons in Idlib and the surrounding area in 2018. Where the same accusation has been repeated in multiple articles, we have only included the earliest example. We chose to stop the chart on the 23rd of November due to the alleged chemical attack in Aleppo, which resulted in a large number of speculatory accusations not based on a specific source.

After two isolated accusations in February and June, there appears to have been a surge of accusations during and after the negotiations for the Sochi agreement, which established a truce and buffer zone in Idlib from the 17th September. The rate of these accusations dropped dramatically over the month of November leading up to the Aleppo chemical attack. Image 2: Claims associating SCD with chemical weapons in Idib during 2018

Accusations associating the SCD with chemical weapons cover a wide geographic area, including Idlib, Hama, and Aleppo. The largest cluster of accusations relates to the north Hama towns of al Lataminah and Kafr Zita, areas which have been repeatedly targeted by chemical weapons deployed by the Syrian government. 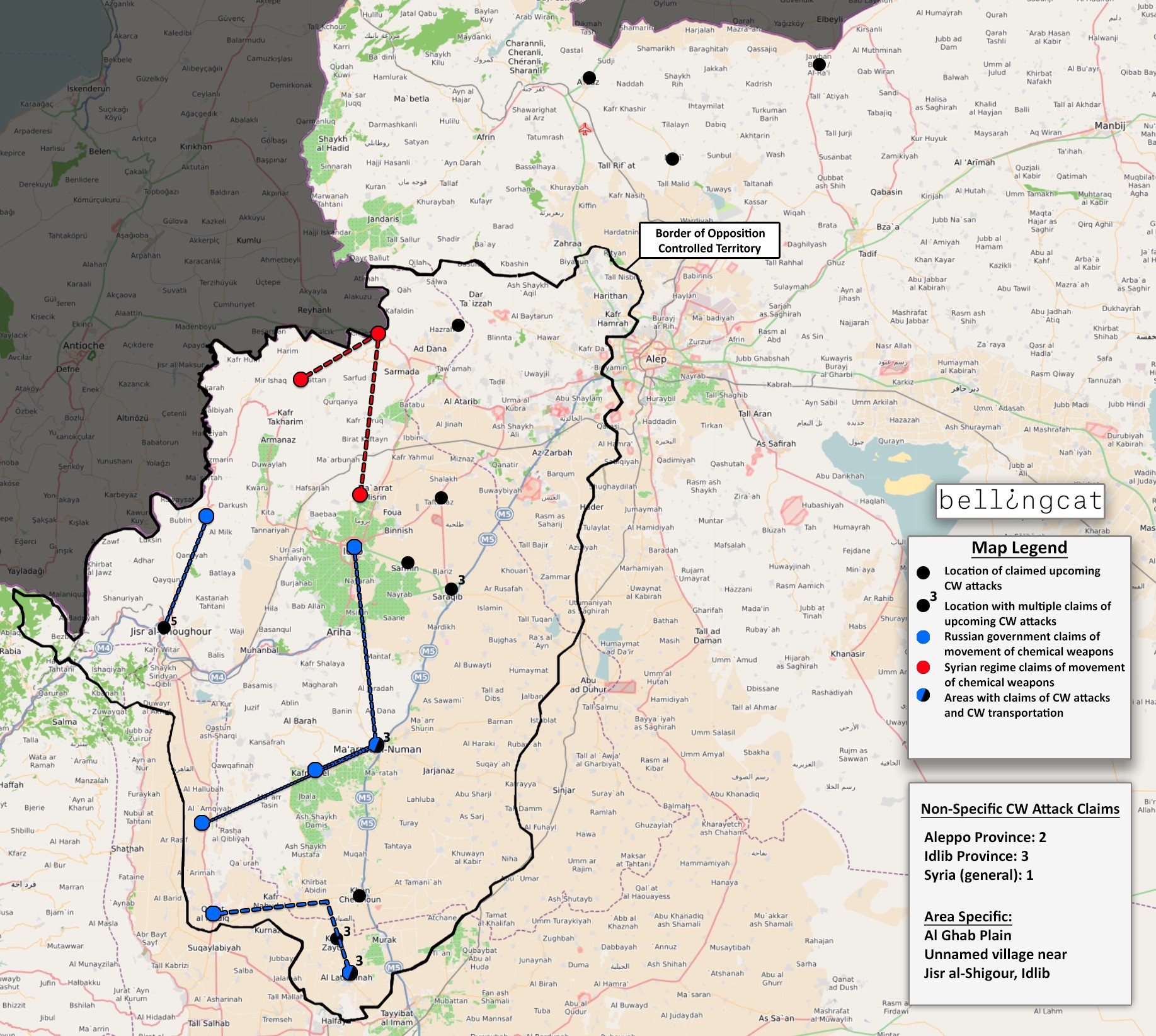 Image 3: Map showing locations allegedly connected to use or movement of chemical weapons by the SCD

A significant proportion, eight out of 22, of these accusations came from the Russian Centre for Reconciliation of Opposing Sides in Syria (RCROSS). As the name suggests, this is a body set up by the Russian MoD, theoretically in order to track violence in Syria and attempt the reconciliation of opposing sides. This investigation indicates that it plays an important role in disseminating what is likely disinformation against civilian first responders, calling into question its stated purpose. 11 of the remaining accusations originate from Russian government controlled sources, such as Sputnik, the Russian Ministry of Defence, or representatives of the Russian government.

Of the 22 claims, all except four explicitly state that future chemical attacks will be some form of “false flag” designed to provoke the West into attacking the Syrian government, targeting civilians in rebel held areas. None of the other four state that the SCD would use chemical weapons to attack civilians in government-held territory. Despite attempting to imply that the SCD was associated with the apparent chemical attack in Aleppo on 24th November, that implication does not match the narrative that is built by the accusations we examined. It should also be noted that we believe the open source evidence from the Aleppo attack is inconclusive, while the British and American governments claim it was carried out by the Syrian government using some form of tear gas.

The accusations occasionally veer into the bizarre. On September 11 and 12 of this year, RCROSS stated that SCD had worked with HTS to create a fake chemical attack. RCROSS claimed this was filmed by “Middle Eastern TV channels” and the “regional branch of the American news channel.” This footage was supposedly to be submitted to the UN and OPCW. Leaving aside the absurdity of the accusation itself, the RCROSS never produced a single piece of evidence to support this claim, and no such footage has been released.

If one were to take the word of the Russian or Syrian governments, there is a vast network of different groups, many of whom are currently fighting against each other, working together to carry out these attacks which didn’t actually happen. Bellingcat has already explored the absurdity of what a “false flag” chemical attack at Khan Sheikhoun would mean. The Russian and Syrian claims would add several layers of complexity to this scenario, as they have variously accused the following groups of being involved:

For those familiar with the Syrian conflict, the idea that these groups are working together is incredibly unlikely. The idea that a huge campaign to create “false flag” attacks would go unchallenged by other groups, local civilians, civil society or foreign press pushes the boundary of absurdity.

Due to the low level of evidence provided with the accusations, it is difficult to debunk each one individually, as there is no real material to disprove. Of the 22 allegations that we identified, the sum of all verifiable evidence provided was a single 9-second video clip and a single image. Both were presented in support of the claim that IS had attacked HTS, taking two chlorine cylinders and killing two employees of SCD. The video depicted plant machinery operating next to a series of caves which can be geolocated to the center of al Lataminah, while the image showed a truck with a possibly cylindrical container on the back. No exact location data was provided, while the picture and video appear to have been cropped or zoomed in, making geolocation difficult.

The video from al Lataminah does show a location associated with the SCD, and it does seem the figure in the video is wearing a white hat or helmet. However, nothing within the image or video supports the claim that there was an IS attack in this area during this time, or that any movement of chemical weapons took place. In both the video and image there appear to be possibly cylindrical objects, but without better quality imagery it is impossible to say with any certainty if they are cylindrical, let alone what they are. 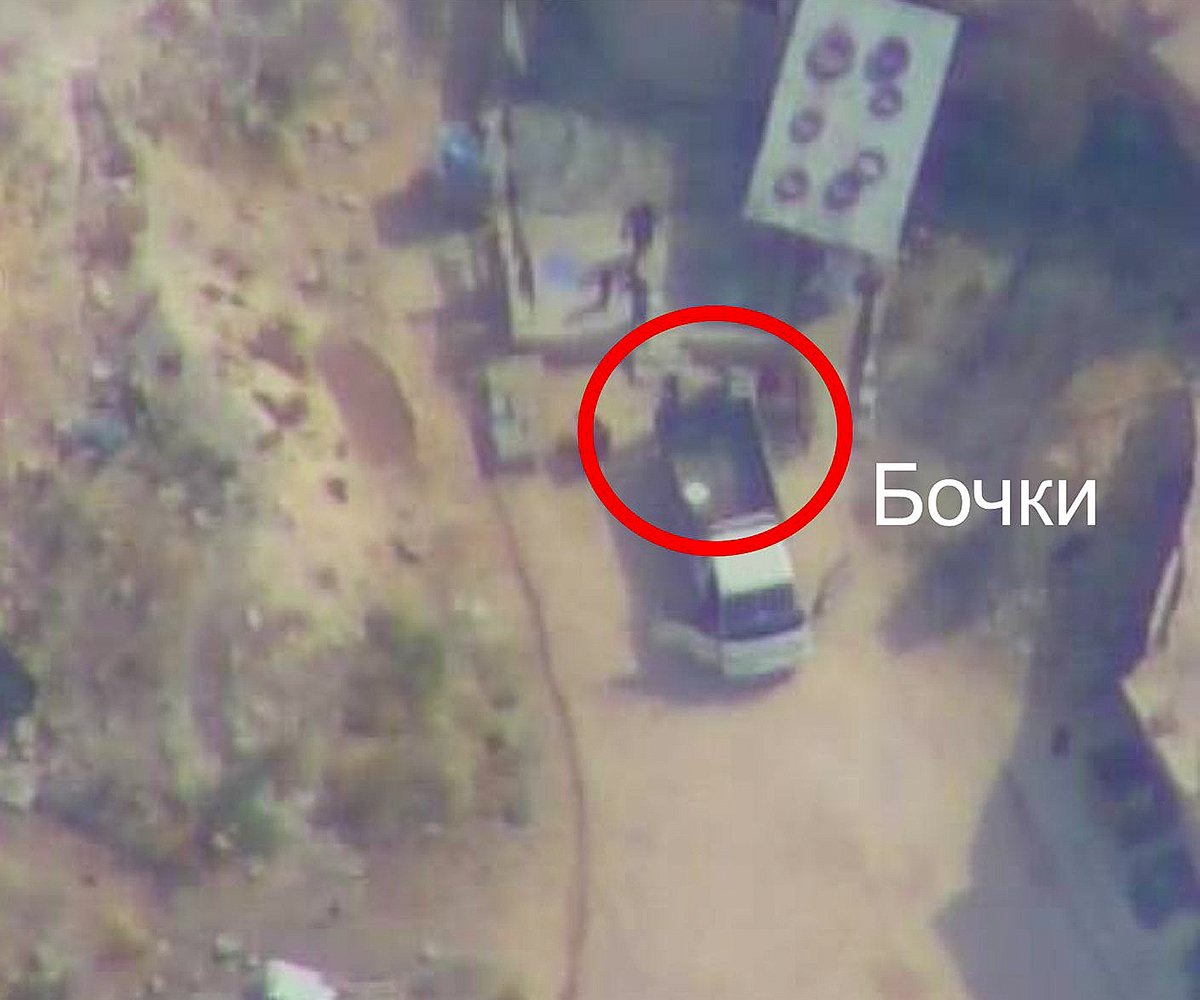 Despite this dearth of verifiable evidence, sources such as the Russian MoD and its monitoring organisation, RCROSS, have continually stated accusations as if they were established facts. The language they use leaves no room for doubt or uncertainty. Indeed, for a cluster of claims in mid-September which appear to be linked, RCROSS stated they had “irrefutable information.” about an imminent attack. This information has not been published. Previous Russian MoD claims of having “irrefutable” evidence turned out to be footage from a computer game.

Time and again the Russian government has provided evidence which has either been faked, doctored or plagiarized from bloggers. To have any credibility when making these accusations the Russian MoD must be transparent and release its “irrefutable” evidence. Until then, based on previous experience, its claims cannot be taken seriously.

The Syrian Civil Defence is an organisation working under extraordinary circumstances, willingly risking their own lives to save others. As with any organisation operating in such a complex conflict, they sometimes make decisions which others would disagree with. However, one only has to watch a fraction of the hundreds of videos of them pulling victims from under the rubble of bombed buildings to understand that they are genuine first responders who have helped to save many thousands of lives across opposition-held Syria.

The disinformation campaign waged against the SCD has been brutal and unrelenting. It has attempted to cast doubt on their ability to provide evidence, painted them as “terrorists” and ultimately tried to transform them into “legitimate targets.” It is clear that Russia and Syria believe that associating the SCD with chemical weapons is a key part of this narrative. Despite claiming to have “irrefutable information” neither the Russian nor Syrian governments appear to have produced any verifiable evidence that actually supports their accusations.

The extraordinarily low level of evidence supporting these accusations, the absurdity of some of the claims and the continual failure to predict a chemical attack exposes these accusations for what they are: a continuation of a deliberate and planned disinformation campaign against a humanitarian organisation operating in the most difficult of circumstances. 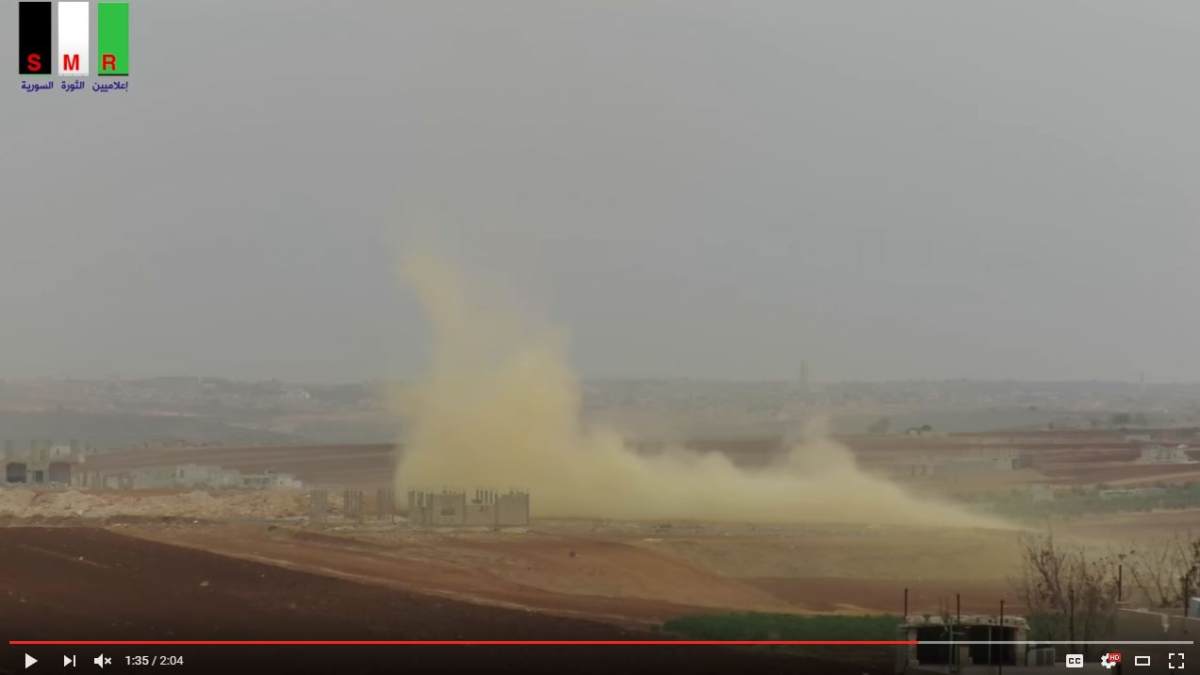