Over the last two years we have observed large increase in the use of commercial off the shelf drones (COTS) in conflict by both state and non-state actors, whether that be the Islamic State, the Iraqi Federal Police, or the multitude of other users across the world. Recently we have seen Israel join other state-level actors in using COTS drones, in this case as a tool for deploying tear gas and disabling fire kites sent aloft by Palestinian protestors, as well as observation platforms. Although Israel has long been a user of military drones, in 2017 it also appears to have purchased “hundreds” of commercial DJI Matrice and Mavic drones, some of which allegedly were allocated to the Border Defence Force.

From March 2018 there has been a surge in reports and examples of the IDF using commercial drones for military purposes. This activity appears to have been localised around the Gaza strip during a sustained period of protesting and unrest which the Palestinians have named “The Great March of Return”. IDF commercial drones have been deployed on a wide scale and using relatively novel tactics. Although the idea of using drones to deploy tear gas is not new, Israel appears to have been the first country to use it on such a wide scale during protests.

Although there are many kinds of lachrymator agents, this article will use the term “tear gas” to refer to the agents used by the IDF as less-than-lethal agents.

The system that has appeared most often in images and video has been a drone which drops multiple small tear gas grenades. These appear to have been used extensively to target protesters, as well as journalists and other activists. The system appears to consist of a DJI Matrice 600 with two pods hung underneath it, each carrying 6 grenades. Each pod consists of two halves that can swing open to release the grenades, and can be opened singly or both at the same time. 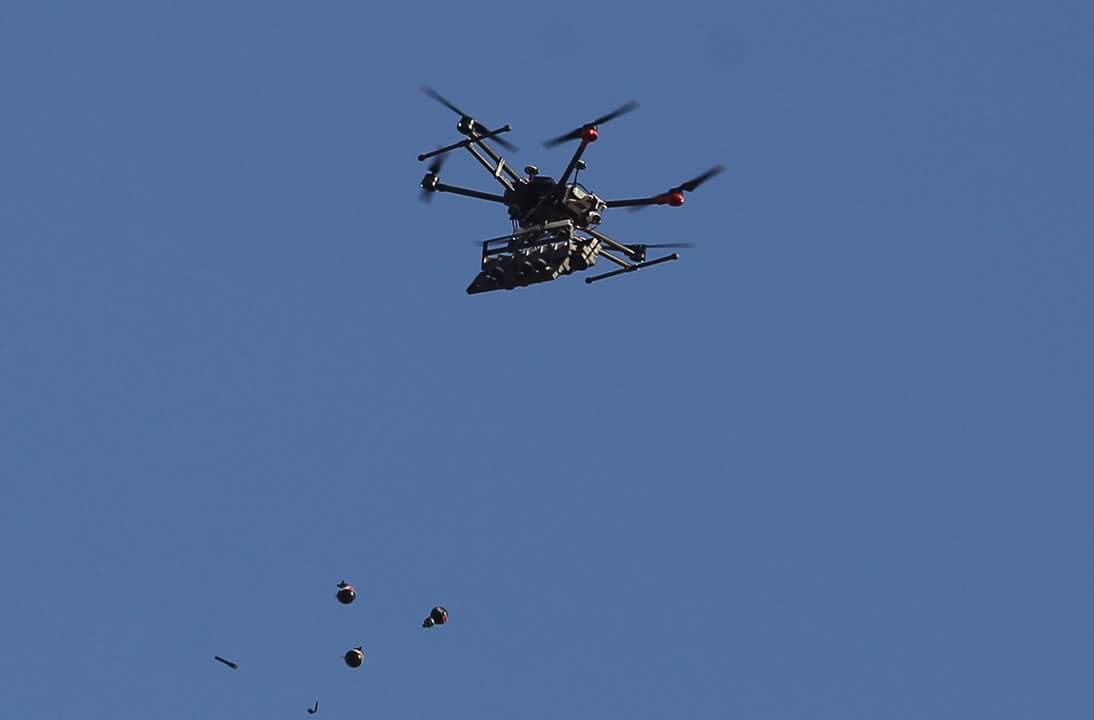 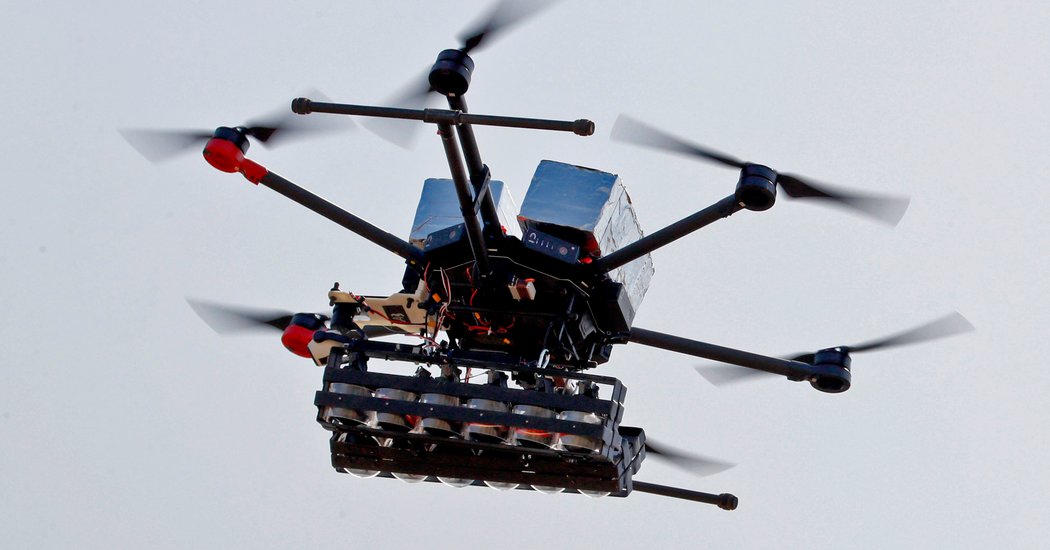 A close-up image of the release mechanism. (source)

The actual munitions used by this sytem appear similar to the tear gas grenades manufactured by Combined Systems, which is already used by the IDF in both a hand-held and rifle-launched configuration. 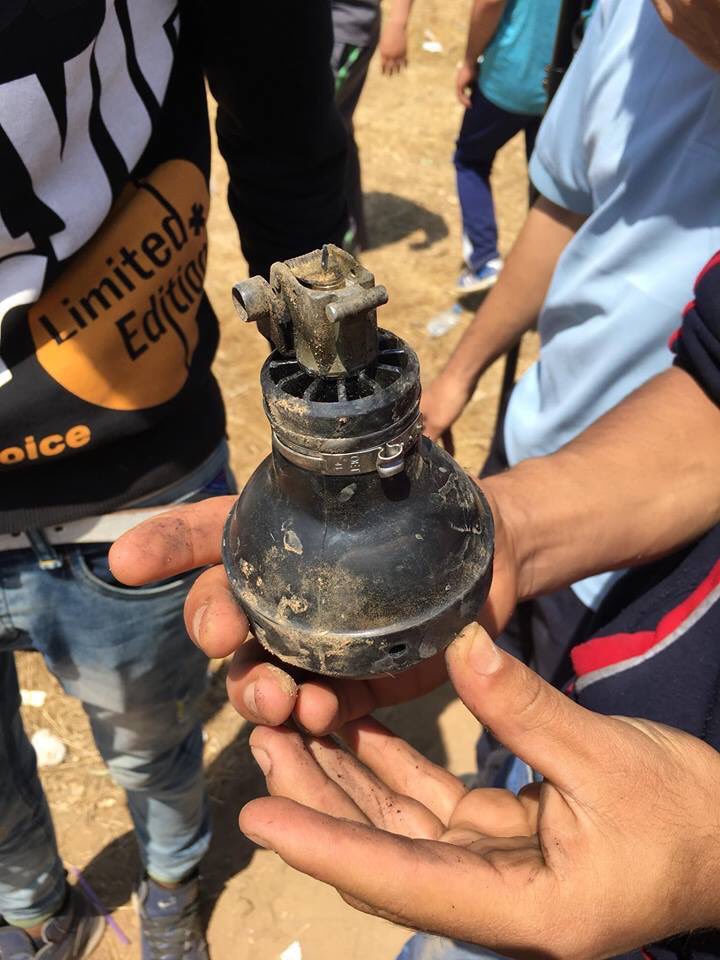 There have also been claims that the IDF has been using the Cyclone Riot Control Drone System from the Israeli Defence Group to deploy tear gas. There is some media which appears to show a similar system in use, dropping small cylinders rather than tear gas grenades. However, these pictures appear to show a rectangular deployment pod, rather than a rounded one. It is possible this is the same system shown in this IDF video, which appears to have six tear gas launching tubes in a rectangular configurtion, also from a DJI Matrice 600. Still from IDF video. Note the six tubes slung underneath the drone in a rectangular configuration (source)

There also appears to be a model of drone which carries a single, larger munition, likely also a tear gas grenade. The video below shows this system dropping a single grenade onto a tent.

Other images, claiming to show a downed IDF drone, also feature what appears to be a single-grenade release mechanism. It is notable that both the drones in the video above and the images below appear to be DJI Matrice 600’s. This release mechanism works by the two servos on either side withdrawing, thereby releasing a strap which holds the munition in the cradle. We contacted the manufacturer of this kind of servo, who stated they were not aware their product was being used in this manner (source) 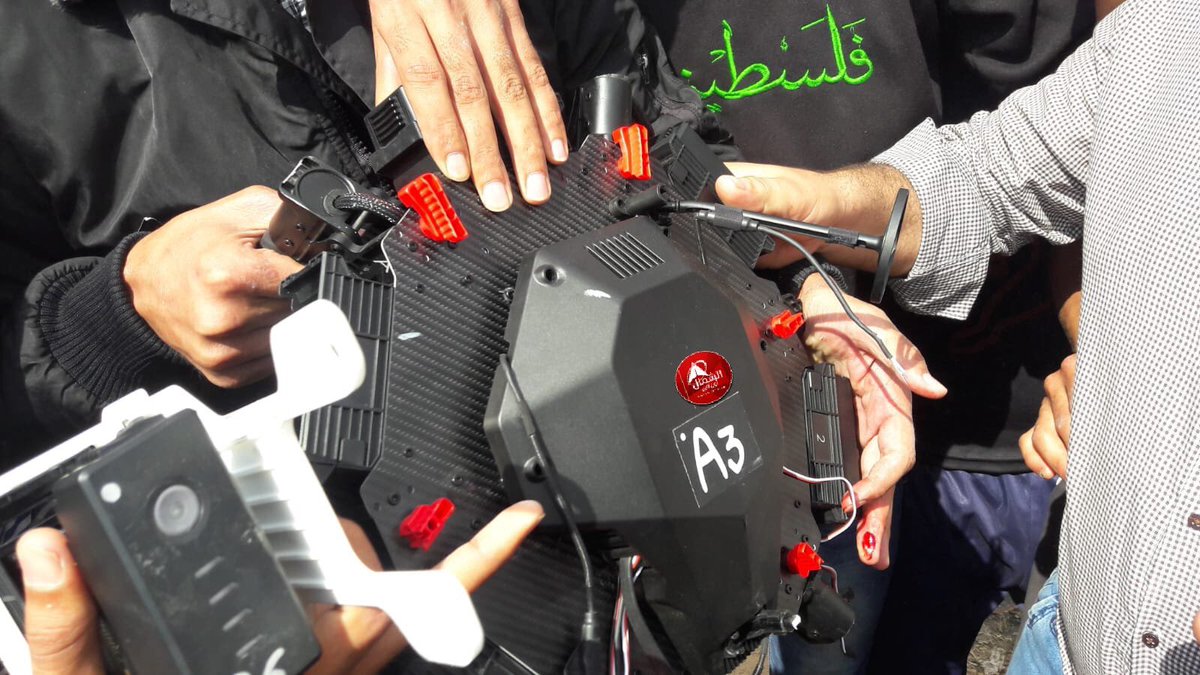 The photo below shows what is alleged to be a drone deploying gas directly from a mechanism underneath its body. The open-source evidence for the direct deployment of tear gas from a drone appears to be limited, and has been seen on a far smaller scale than those dropping tear gas grenades. 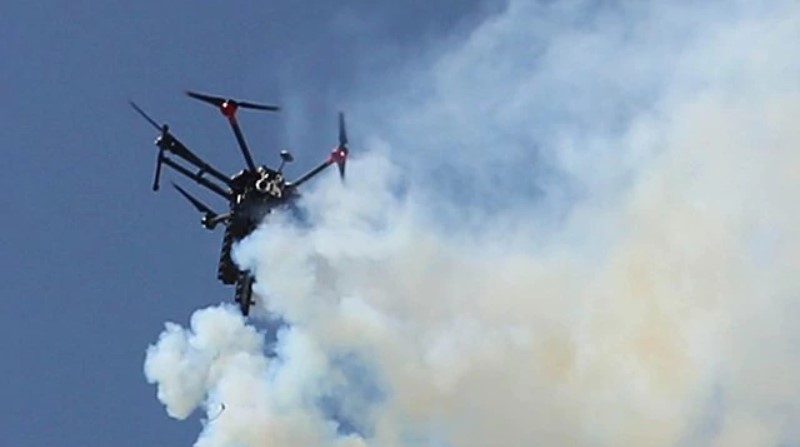 The image below also appears to show a drone releasing a tear gas in this manner, yet the structure underneath appears to be the same as that of the drones which drop multiple tear gas grenades. It may therefore be a possibility that the release of gas from a drone is not intentional. The system could be malfunctioning, with a grenade either detonating accidentally, or being caught and not falling as designed. This appears more likely when one considers that tear gas deployed at this height is unlikely to be as effective as if deployed at ground level. Israel has showcased its use of small drone to destroy fire-kites released by Palestinians towards Israeli territory. This is certainly appears to be a more cost-effective, efficient and safer method of destroying them than other means such as small arms fire. The IDF has showcased the use of commercial drones to take down these kites by demonstrating them for journalists and releasing videos of them in action.

Within the video above, three drones are evident: what appears to be a DJI Matrice 100, a Team Blacksheep Oblivion Racing drone and another kind of unknown racing drone. The two racing drones appear to be flown straight at the target, deliberately tangling in the lines and so bringing the kite down, usually on the Israeli side of the border. The DJI Matrice 100 appears to have been designed for a different technique, as it has some kind of string attached to it, reportedly with fishhooks attached. The intention seems to be to use this string to entangle the kites, allowing them to be towed to a safe area. An IDF racing drone of an unknown type (source)

An IDF Matrice 100, with a sales picture on the right as a comparison (source)

There is even video of what appears to be a toy prop plane being used in an attempt to take down a Palestinian kite.

The use of commercial drones to deploy tear gas is an interesting and recent development in crowd control tactics. It gives the user the power to target tear gas quite accurately and at a much longer range than the current IDF systems, which range from hand-thrown systems, 40mm UGL variants, and vehicle-mounted volley launchers. The vehicle mounted VENOM launchers can fire a barrage of 30 CS gas grenades, however, it is limited in range and has a wide area effect. The IDF does field an extended range 40mm gas grenade with a range of several hundred meters, however it cannot be fired in large volleys. Therefore theses drones offer a new capability that can deploy a large amount of tear gas, at a range of up to several kilometers, with relative accuracy.

During this survey, we identified five different commercial drones being used by the IDF for various tasks: DJI Matrice 100, Matrice 600, a Blacksheep racing drone, an unknown racing drone and what appears to be a toy RC plane. It is likely that other models are also being used.  Given the wide range of drones being used for similar tasks it seems likely that the IDF is still experimenting with different models, indicating this is still a nascent capability. This is further supported by the reports of reservists and senior officers who happen to be drone hobbyists being activated as drone pilots. It remains to be seen how this drone air-force will be used in future, and whether it will be seen in other areas of confrontation with Palestinian protestors.

The ethical debate about the use of drones for crowd control is one that has not been fully explored yet, but which will no doubt generate vigorous arguments. The tactics used by the IDF have already started to raise questions about how to create and enforce norms related to the use of small drones by state-level actors for crowd control and during conflict. This debate is especially important in the context of what appears to be the use of commercial drones by the IDF to deliberately target journalists and activists beyond the “front line”.

It is likely that other states will be keenly watching this experimental use of small drones for crowd control. Even as simple surveillance platforms, small UAV’s can be an effective asset for commanders on the ground, and are far cheaper than helicopters. It seems likely that the use of drones in this capacity is a theme that will soon become more prevalent, and we should anticipate further systems being fielded by both Israel and other countries.