On January 31, footage emerged from sources within Syria showing what is claimed to be a chemical weapon attack in the countryside of Damascus. This article will use open source analysis techniques to examine the footage and judge its veracity.

Injured: 11 (3 of them in critical situation)

The media office of Al-Marj has published photos and the below video showing the remnants of the rocket that contained the chlorine gas. 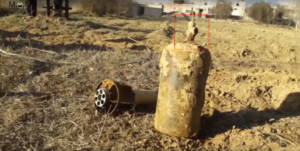 Zooming in on the above still from the video, we can read the following: 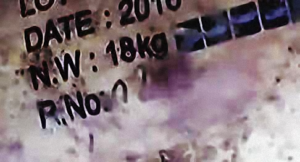 We can clearly see the impact crater as a result of the rocket attack below:

Another video has been published by Qasioun News Agency about the same incident also shows the type of munition used. 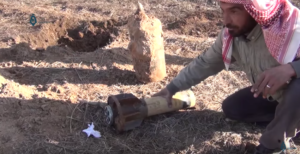 Other photos were published by Azem Lens, a group of photographers that accompany Jaish Al Islam, showing the same type of rocket. We notice from the below photo that the marking numbers are different than the first rocket. 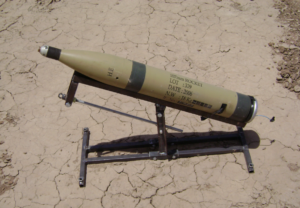 It’s very clear the rocket in the video is a match for the Iranian examples, with similar colouring and markings. A very interesting detail is the date of manufacture (2016), which can be clearly seen in this screenshot taken from the media office of Al-Marj video.

The design of the munition is close to that of improvised rocket assisted munitions (IRAMs) used by the Syrian military and documented since 2013, which also use 107mm rocket motors. A typical IRAM takes a conventional rocket and replaces the warhead with a much larger one, increasing the destructive power of the munitions while sacrificing range and accuracy. What’s significant about the IRAMs used in the above attack is instead of an explosive warhead, the warhead was reportedly filled with chlorine gas, the first document instance of this in the conflict. While there have been previous claims of chlorine rockets being used in Syria, this is the first time there has been visual evidence. Previous examples of chlorine gas use recorded in the conflict have been from air dropped munitions, not surface to surface rockets, as seen in the previous example.

The medical office in Al Marj published a report about chlorine gas attack:

On Monday 30/01/2017 at 4:00pm Damascus time, The emergency department of Al Marj received injured civilians as a result of a poisoned gas attack (probably chlorine gas).

The number of injured was 11, this includes 3 who are in a critical health situation and they had the following symptoms:

The injured who came to the hospital said that the exploded bombs contained green gas with a very bad smell. They had breathing difficulties immediately after they were exposed to this smell. We provided treatment for those who were injured. The following video was published by the YouTube channel of Erbin surgery hospital. The person in the video says:

On Feb 9th 2017 in the morning, we received several cases that had the following symptoms: eruption, absence of consciousness, vomiting and irritation in the eye. These symptoms are the result of the chlorine gas exposure.

A second video shows several individuals being treated in what appears to be a field hospital. The video was uploaded to the YouTube channel of the Qasioun News Agency.

This morning we received four injured as a result of a chlorine gas attack. There was one casualty out of the four injured. The symptoms were related to breathing difficulties, the absence of consciousness. We treated the injured with hydrocortisone and hexon as well as oxygen.

Smart News Agency has also published a video about this incident in February 10, 2017 from the frontlines in Eastern Ghouta, where they interviewed one of the fighters who appeared to be with Failaq Al Rahman Brigade. He said:

The frontline was attacked with a rocket that contained poisonous gas which resulted of one casualty and three injured. They are still in the medical point. Another video published by SMO Syria YouTube channel shows the frontline that was allegedly attacked with chlorine gas and fighters from the Failaq Al Rahman Brigade.

We were able to geolocate the building which appeared in the video above. This is the location that was allegedly attacked by a chlorine rocket. We made certain that this was the correct building by cross-referencing the above image with a photograph uploaded to Panoramio. We geolocated the same building through a video that has been published by the Smart News Agency on February 7, 2017. They claim in the video that the same area was attacked by five airstrikes from the Syrian government. This was only two days before the alleged chlorine gas attack in this same area. Below is the terrain behind a building, showing the same hills seen in the videos above. Below is a recent satellite image dating February 7, 2017, which shows significant damage and destruction at the impact site. It appears that Syrian government forces attacked Al Marj and Erbin, which are located in Eastern Ghouta in the suburbs of Damascus, with a poison gas that was identified as chlorine by local medical workers. Syrian government forces have been trying to advance in Erbin and have reportedly conducted airstrikes before using chemical weapons when their advance failed against the Failaq Al Rahman Brigade.