Why Assad's Press Officer is Speaking at an Anti-ISIS Meeting in Washington, DC 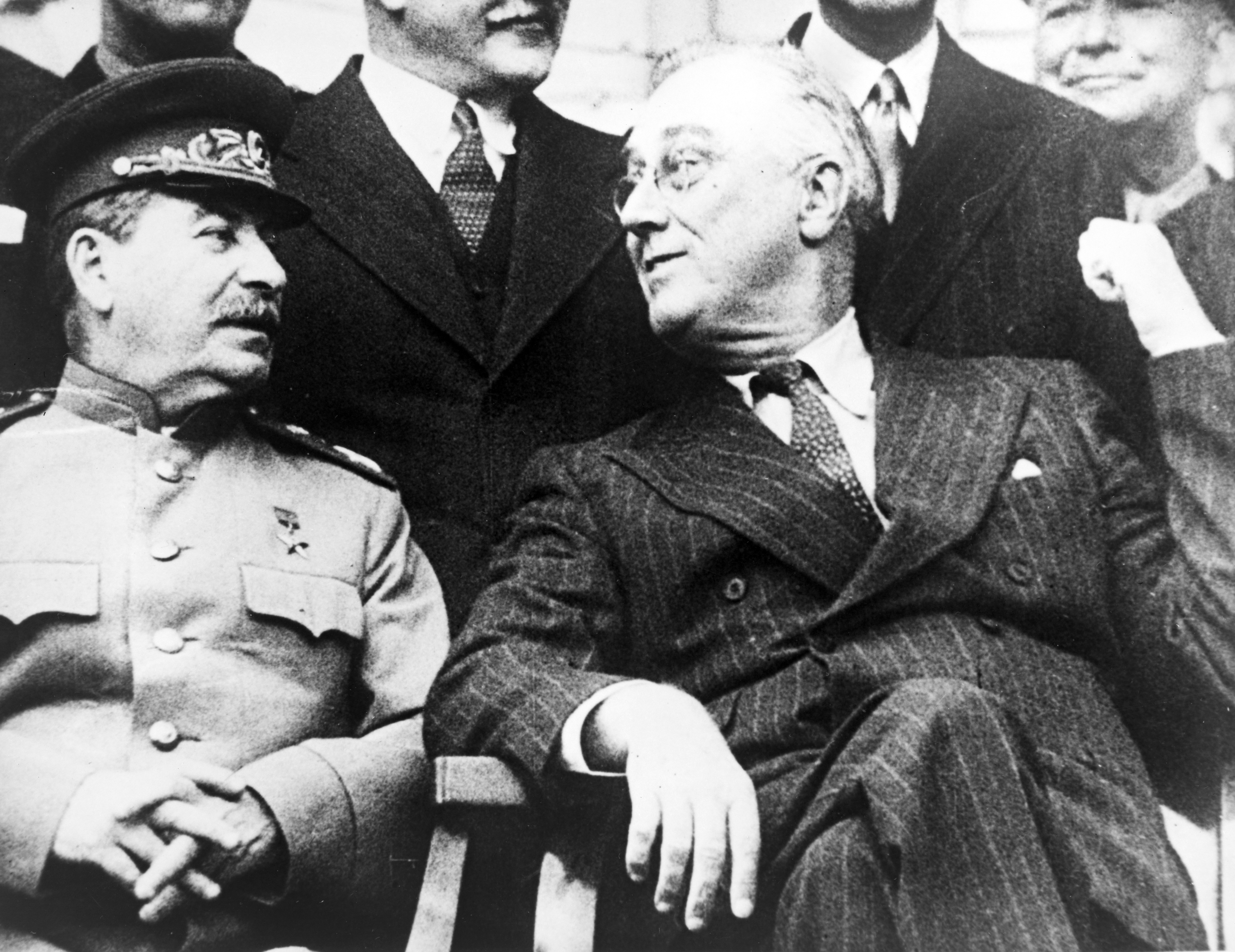 “For me, I love the picture of Roosevelt and Stalin. You know the picture? It represents the reality of the world, of what must be done to stop a global threat of death and destruction.”

In 1943 in Tehran, Iran, the heads of state of the three Allied powers — Roosevelt, Stalin, and Churchill — met to discuss military strategy in how to end the encroaching threat of Hitler and Nazism.

Roosevelt, Stalin, and Churchill all had different reasonings for their war against the Nazis.

Stalin had a vested interest in securing Soviet territory against aggression and establishing a unitary Communist state, which is why he pursued an alliance with Britain and France against the Nazis, then a non-aggression pact with the Nazis themselves after he was rebuffed.

Churchill had an interest in stopping the encroachment of the Nazis, and protecting Europe against a looming wall of fascism which threatened to expand and consume everything — Poland, France, Britain, and the world.

Roosevelt had an interest in maintaining the global order, and stopping Europe from slipping into economic and social despair at the hands of fascist ideology.

But all agreed, at the least, that Hitler had to be ended. And all met to coordinate the effort.

Ahmad Maki Kubba, the founder and president of the Global Alliance for Terminating Al-Qaeda and ISIS (GAFTA), believes this image is the answer.

I spoke with Maki to ask why the GAFTA was hosting Bouthaina Shaaban, the political and media advisor to Bashar al-Assad, as a guest speaker for the upcoming United We Stand to Terminate ISIS meeting on June 2 at the National Press Club in Washington, DC.

Shaaban is one of three guest speakers, though she must teleconference in via Skype to avoid US sanctions levied on her in 2011 for her role in the Assad regime’s atrocities. The others include Bassam Al Hussaini, the Iraqi government liaison for the Iran-backed Popular Mobilization Forces, and Imam Hesham al-Hussaini, of the Shia Karbalaa Islamic Education Center in Dearborn, Michigan.

The role of the latter two individuals in opposing ISIS can not be disputed. The PMF has been instrumental in combating ISIS militarily in Iraq. And as ISIS is a group which does not represent any practical definition or interpretation of Islam, the American Muslim perspective on ISIS is, as Maki told me, “key to challenging ISIS and Al-Qaeda on all fronts.”

“This war is not just a military war. It is a media war, and a propaganda war. ISIS fights truth with dishonesty, and it does that not only through fighting, but through distortion of reality.”

The participation of Shaaban, on the other hand, is perhaps more dubious.

The exact extent by which the Assad regime has been culpable in the rise of ISIS is unclear, muddied by the fog of war. Certainly, like many parties, the regime has exploited ISIS for its own gains. Maki noted this. He also noted ISIS had been exploited for economic and political gain by Turkey, by Russia, by the United States, and by the opposition. And this, in general, is true.

As Carnegie associate Aron Lund aptly put it, whichever group you dislike most — whether the Assad regime, the FSA, the YPG, or Turkey — they all trade with ISIS.

“Syria is not the scene of some sophisticated plot. It’s the invisible hand of the free market wearing brass knuckles,” said Lund.

But why Shaaban? The Assad regime has, on countless occasions, embraced media and propaganda to achieve its political ends in Syria. They have, on just as many occasions, exploited the presence of ISIS in their end game against the rebel opposition — an opposition which emerged in direct response to widespread human rights abuses by the regime’s mukhabarat.

In 2012, Shaaban was captured on tape discussing the explosives she could provide to Michel Samaha, former Lebanese tourism minister and convicted terrorist, in order to kill leading Lebanese Christian officials and spark a sectarian conflict. Shaaban even suggested potential targets where Samaha could carry out his terror attacks.

Inviting the propaganda officer of the Assad regime can only entail a recipe for disaster, or perhaps a further addition of propaganda to Syria’s already muddied propaganda war.

Maki was confused at this question. Offended, in fact. He raised his voice, and spoke rapidly. But he explained.

“Listen, we [the GAFTA] do not support any group. I do sympathize with the Syrian people, for what they have been through. But we must understand all of the elements of the conflict, and we are bringing in this dialogue from all parties because that is what is necessary. That is what must be done to combat a greater threat.”

Maki was a dissident under the Baathist Saddam regime, who was persecuted and fled in 1979 after facing imprisonment, torture, and an impending death sentence. He was one of the early ones, who felt the brutality of the autocratic Baathist state as Saddam twirled his cigar and pulled “enemies of the state” out of the room, one by one, to be executed for their unspoken crimes.

Perhaps that is why he became so upset when questioned on the participation of Assad’s propaganda officer in the anti-ISIS meeting he organized. He knows, perhaps better than anyone, the truth of the Assad regime and other regimes like it. He has felt its pain and its humiliation.

Or perhaps not. In GAFTA’s “Golden Vision” statement, Maki alleges that ISIS was created and supported by “Saudi Arabia, Turkey, Qatar, and Israel.” He says these groups used ISIS to carry out the “removal of President Bashar al-Assad for their own interests,” and they should be “held accountable for their involvement in state-sponsored terrorism, and crimes against humanity.”

None of the statements included in GAFTA’s Golden Vision have any substantial basis in reality, and as it stands, are unsubstantiated by all available information and analysis of the Syrian conflict. They reveal a portrait of the Syrian conflict from the perspective of a man who may have forgotten that the Baathist dictatorship of Syria differs from the former Baathist dictatorship of Iraq in name and religious affiliation alone.

Either way, the removal of Bashar al-Assad from power is not Maki’s ideological end-goal.

It is clear that Maki believes ISIS to be the terminus of Syria. He described them not as Muslims, but as Wahhabis. From his perspective, and from the perspective of the GAFTA, the conflict is bloody. It is brutal. It is complex, with various actors pursuing various objectives through various means.

But despite all this, ISIS exists. It is a death cult, it corrupts Islam, and it is a far greater threat than any temporal conflict. Not only is ISIS a threat to Syria and Syrians, Iraq and Iraqis, it is a threat to Islam and to the lives of the 1.6 billion people across the world who practice it.

“So why do you ask me ‘why Shaaban’? I do not understand. She is a critical element in destroying ISIS. And we are not affiliated with any group or government. But Syria is a proxy war, and this proxy war means everyone must be involved to take down the greatest enemy. And for me… For me, I love the picture of Roosevelt and Stalin. You know the picture?”

Like Assad, Stalin was a brutal dictator, responsible for countless deaths and the systematic persecution of his countrymen. Just as Assad, Stalin embraced brutal tactics of war. Forced conscriptions, mass arrests and executions, tortures, scorched earth… These weren’t simply a reality of life under the Soviet state throughout Stalin’s reign. They were critical aspects of Red Army tactics in World War II, the same war which ended Hitler and liberated the concentration camps.

And like the government-fueled press rooms of Pravda and TASS in Stalin’s USSR, Shaaban represents the media wing of a brutal dictator, responsible for advising his propaganda and directing it internally and externally. But does this reality mean we should not embrace her role to fight a greater enemy?

Perhaps not. Reality is more complex. It can not be said thusly that ISIS is a greater enemy than the Assad regime, especially considering the reality of Syria — who is responsible for greater death and destruction? Who has killed more Syrians, caused more chaos, and created the vacuum for the emergence and spread of ISIS throughout the world?

But that does not mean ISIS isn’t a threat. And the Global Alliance for Terminating Al-Qaeda and ISIS was created to address that threat — not by shutting down dialogue, but, at least according to its founder, by creating more of it. Time will tell whether GAFTA will serve as an important forum to defeating ISIS, or a platform for the Assad regime to continue its campaign of total war and crimes against humanity under the auspices of “defeating terrorists.”

“This is just the first of many meetings. We want to reach out to everyone. We will invite Turkey, and Iran, and the opposition. But above all it is important to create dialogue. The Obama administration has shown what can happen when there is no dialogue, when you have no clear goal to combat ISIS. We need to fight with our friends and our enemies, but we need to fight.”

The GAFTA is hosting its “United We Stand to Terminate ISIS” meeting on June 2 at 8:30 AM (EDT) in the Murrow Room of the Press Club, 529 14th St. NW, Washington DC. The meeting is open to the public, and Maki says he hopes many will attend and join in the fight to end ISIS.