Natalia Antonova is the former editor of Bellingcat. She is also a writer and researcher, interested in Russia, disinformation, and various adjacent topics. Her writing has appeared in the Guardian, the Washington Post, Vox, Strange Horizons, Newsweek, n+1, et al. She does not wish to argue with you about the capitalization of the word "oblast" (OF COURSE it's not capitalized).

There is no such thing as harmless disinformation during a pandemic. Yet COVID-19 disinformation spreading within and about religious communities deserves particular attention.

Think about it this way: Within insular groups, especially those that are critical and/or suspicious of science, lies and misleading information about a global health crisis can spread faster than a virus.

Misconceptions influence behavior. When more people underestimated the virus, it affected how they interacted with each other. Some are still underestimating the virus today. For example, there are those who believe that religious gatherings should be exempt from lockdowns and social distancing recommendations, as we have seen in Kansas and elsewhere, for example.

There has been a lot of flippancy on social media over how religious communities choose to act in response to the virus, with this being a fairly standard response:

Flippancy on social media is nothing new, but we have to be aware of the fact that “Darwin-award winning” fundamentalists are still going to infect other people. Unless you’re living on an island, completely cut off from the outside world, your day-to-day decisions in a pandemic affect others and others’ decisions affect you, especially as healthcare systems become overwhelmed.

Religious communities are especially at risk because of emphasis on collective worship — this means both acting collectively, and getting together in the same space to pray, to perform religious study, and so on. These people will then go on to interact with cashiers at the store, with neighbors in the street, and so on. The threat will not be contained.

In The Conversationalist (full disclosure: I was the co-founder of the organization that helped launch this website and have contributed to it in the past), Chrissy Stroop has written a breakdown of how Christian extremism in particular can threaten public health. It is important to note, however, that other religious communities can and have ignored the rules on social distancing — and that this is a worldwide problem with many different contributing factors.

If you are doing research in this area, it’s important to keep your eyes on the big picture, and to allow for nuance.

For an open source researcher, one interesting area of study is how different topics can overlap in the pandemic conspiracy fever swamps. Your personal experiences may be of use here as you pick a particular topic to research.

I live in the United States and grew up in the so-called Bible Belt, for example — and am therefore interested in keeping a close eye on how disinformation can be accelerated by existing hot button issues in the local Christian communities.

One hot button issue for American Christian conservatives is abortion. After hearing from multiple readers that conservative Christians were linking abortion to a possible COVID-19 vaccine, I became intrigued as to how these topics play off each other on social media.

I typed in two search terms, abortion and vaccines, into the Twitter search bar recently, as if I were a layperson, doing a casual search on the subject.

Here’s what immediately came up for me in the top search: Then I immediately get a tweet by a conservative commentator accusing pro-choicers of hypocrisy on vaccines, with a linked article. I must keep in mind that my feed will be tailored — and so this is what you must also keep in mind as you do your own searches.

Scroll down a bit, and the links between abortions and vaccines are argued more explicitly by other Twitter users.

Here you can see the latest top tweets by adding min_faves:250 or whatever number you want, so you can get your eyeballs on what other people are favoriting at this time.

This is what I got recently, via another casual search: If I am a regular person who isn’t familiar with the issues involved and is trying to find out more, what is the picture that I am going to get? That’s right, that evil abortionists are using the pandemic to push dangerous vaccines on people — and worse.

You can do simple searches like this for any number of disinformation vectors — though I highly recommend this TweetDeck guide from my colleague, Charlotte Godart, if you want to save yourself some time when doing more specific, targeted research.

Hopping over to Facebook, I type in coronavirus and abortion, doing another casual search, and am greeted with this in the “All” search column (as you can see in the left column, I can tailor my results to where I currently live, such as Washington D.C. or, another city where I’ve lived, such as Kyiv, Ukraine, but once again, I am trying to mimic a casual search here): Because I’m searching for coronavirus, Facebook is immediately instructing me on safety measures — which is not bad.

This is immediately followed by articles from reputable media outlets and the WHO’s official Facebook page: 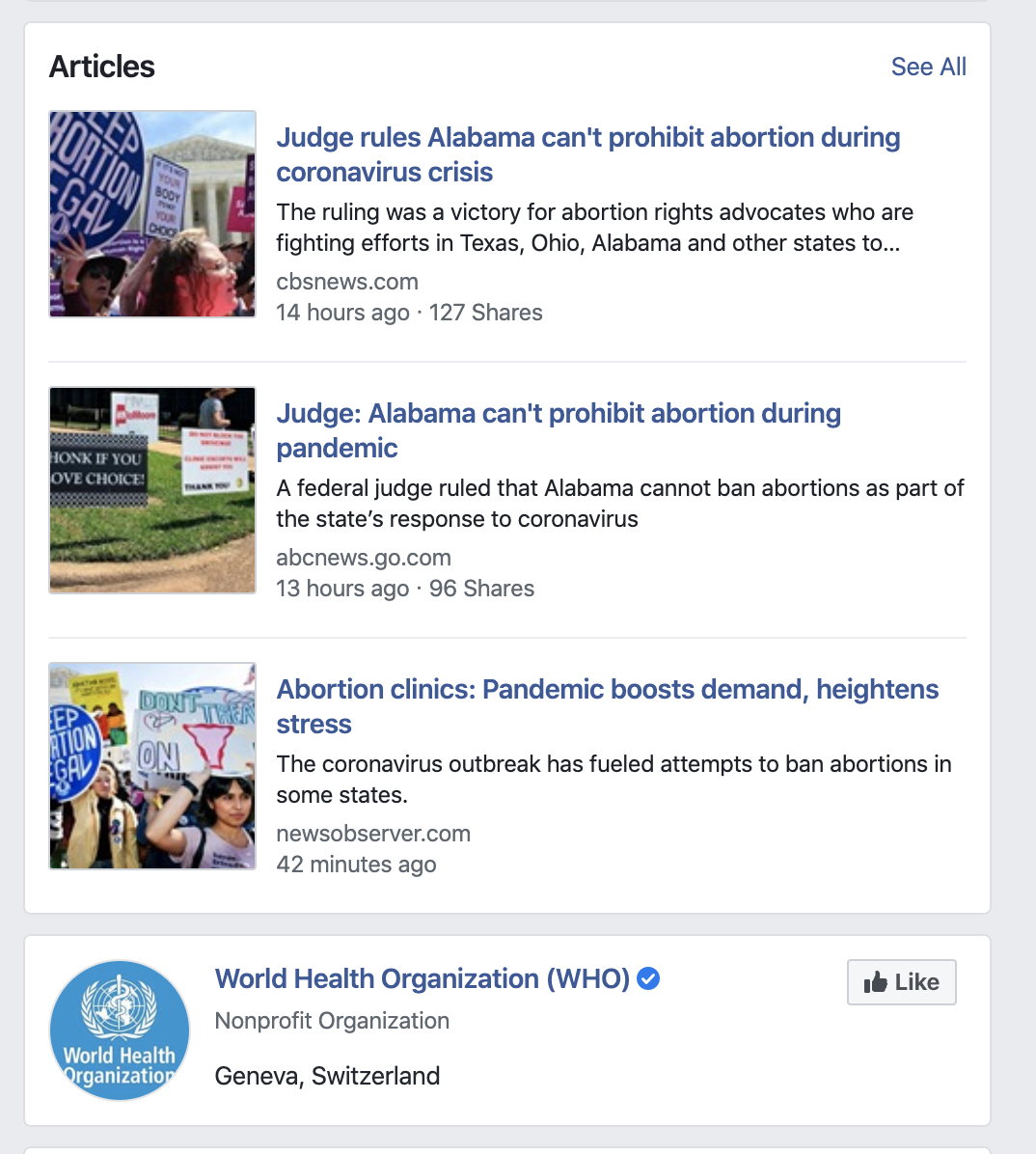 Next, I click on the “Posts” tab, as a person might when they want to know what their friends are saying about a particular issue: 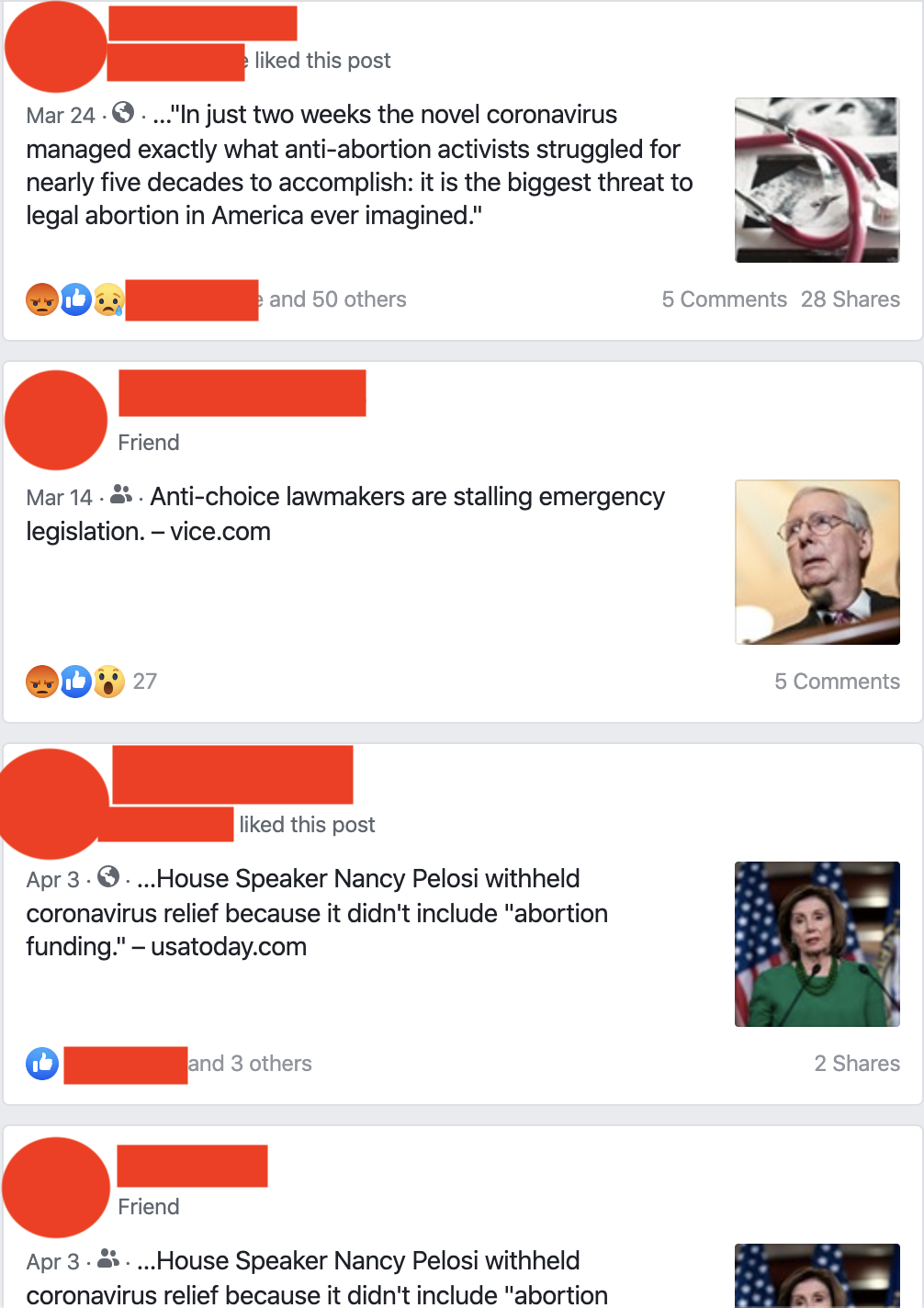 Facebook provides me with a selection of posts by my friends and their friends.

IMPORTANT: Here is where you must remember that most of your friends are likely to be of the same ideological bent/background as you are!

I live in a densely populated urban area and many of my friends are liberal/progressive — this augments my Facebook experience.

Imagine what a member of a tight-knit religious community might be seeing? A person with many conservative Christian relatives who are very active on Facebook?

A Twitter follower of mine from a rural Midwestern town, with many conservative Christian relatives, sent me some screenshots of what happened when they searched for similar content on Facebook. Here is one of their top results — a video on how Bill Gates is driven by Satan to spread dangerous vaccines: 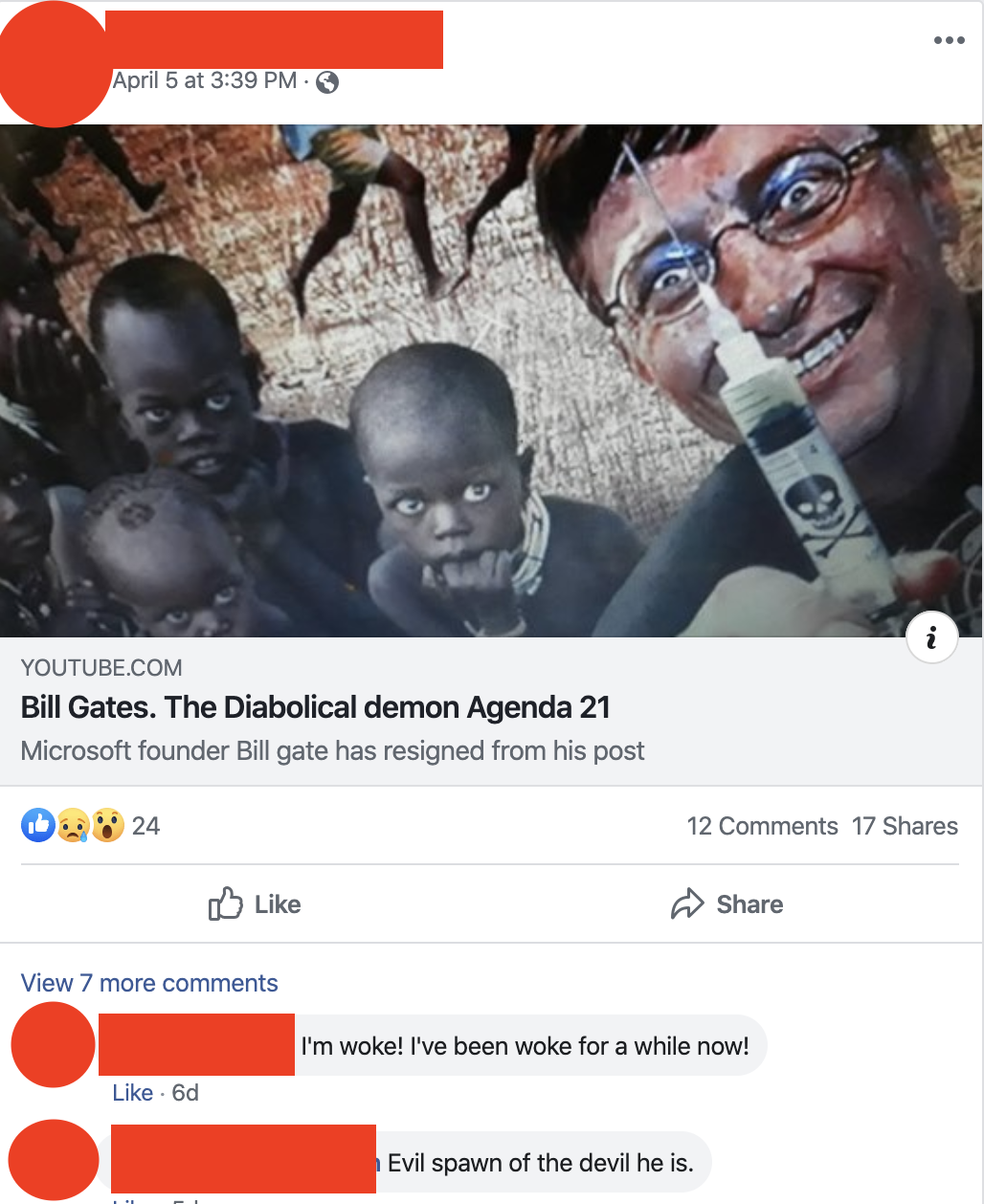 Here is what another follower saw:

When conducting research on Facebook, it’s important to consider that we all have different information networks. Your “normal” may look very different from somebody else’s.

Therefore, you must not allow yourself to have tunnel vision as you do your research.

Be aware, be able to step outside your own experience — this is what’s important if you are studying disinformation today.

This isn’t just useful for research. In a public health crisis, it’s important to know if the people in your town are behaving dangerously or else spreading dangerous rumors and hoaxes online — and to take necessary precautions.

The Other Side Also Has Fakes!

This is not at all to say that my social media feeds do not contain disinformation and misinformation.

Consider the fact that fakes about religious fundamentalists have also sprung up as the internet continues to react to the pandemic.

Televangelist Pat Robertson, for example, was recently quoted as saying that oral sex was the real cause of COVID-19. Snopes traced that back to a website that appears to traffic in satire and/or false information.

Yet a viral tweet about Pat Robertson’s alleged statement is still up, making no mention of the original source of the comments: (Here is the original tweet, and the archived version, in case it gets deleted, is here)

Scroll down through the top responses, and you will see that the majority of the people responding have no idea that they’ve been fooled. In fact, it’s possible that the author of the tweet is similarly in the dark. 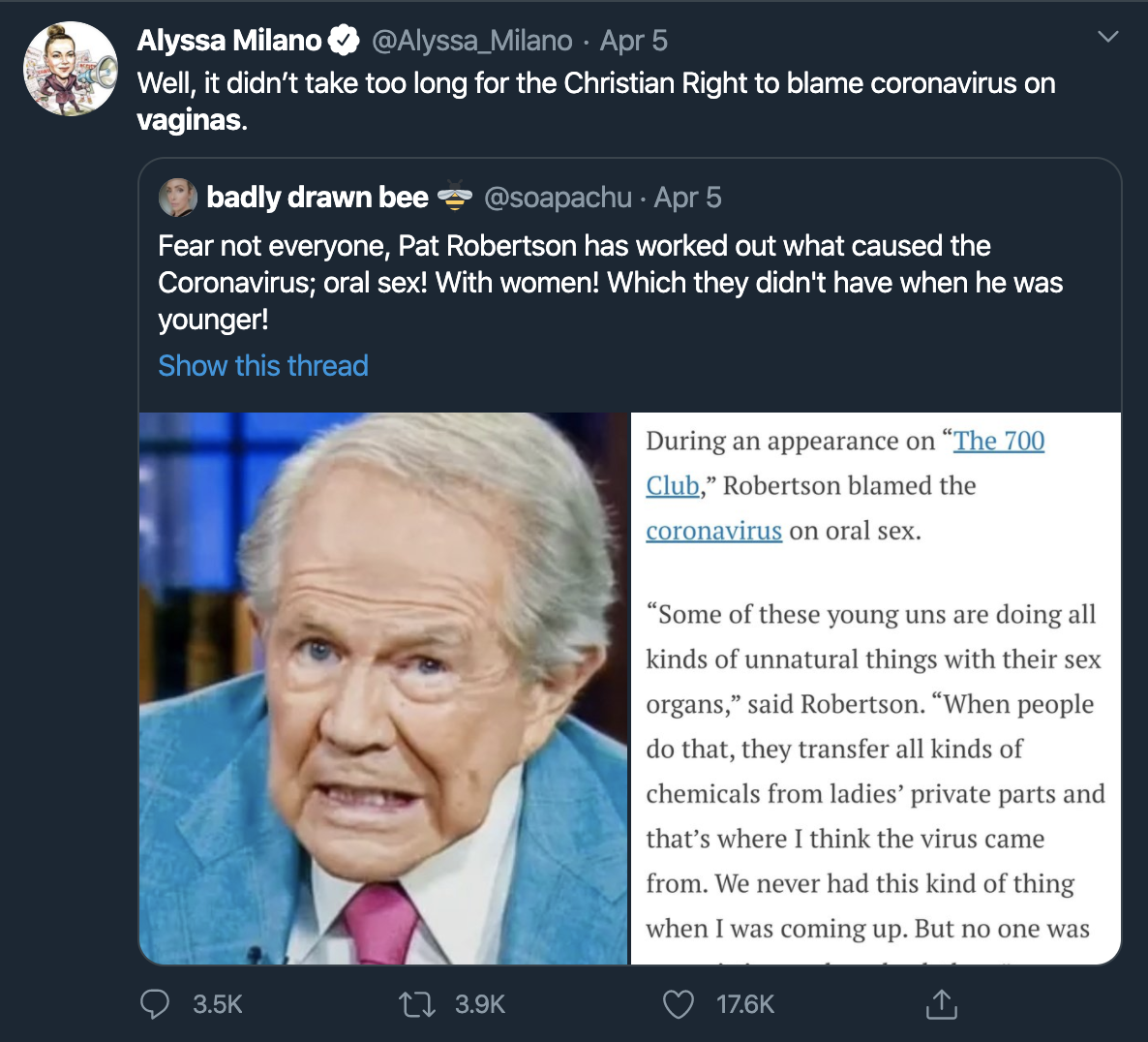 Having originally noticed the viral tweet myself, I noticed that there was no attribution as to the source of the quote.

I also noticed that Robertson was being “quoted” while using informal transliteration of speech— so, “young uns” instead of the “young ones” that would have been standard news speak.

Brushing up on standard news speak, incidentally, is often a good way to spot satire and fakes. You can do that by simply reading a handful of short news articles per day, noting the language conventions.

After encountering the viral tweet, I quickly did some digging and realized that the story was like a satire genie that had escaped its bottle.

This is a classic example of how past statements and events can help shape and accelerate the spread of fakes. Robertson has a history of making bizarre, controversial statements about tragic world events and helping amplify such statements.

Therefore, without some research, it’s very easy to believe that he made a similar comment about the current pandemic.

What’s interesting about the hoax website that originally published the Pat Robertson story, is that it calls itself “The Business Standard News.” Plug that into Google, and the first result for you will likely be a respectable Indian newspaper with pretty regular seeming output, or so was the case for me: 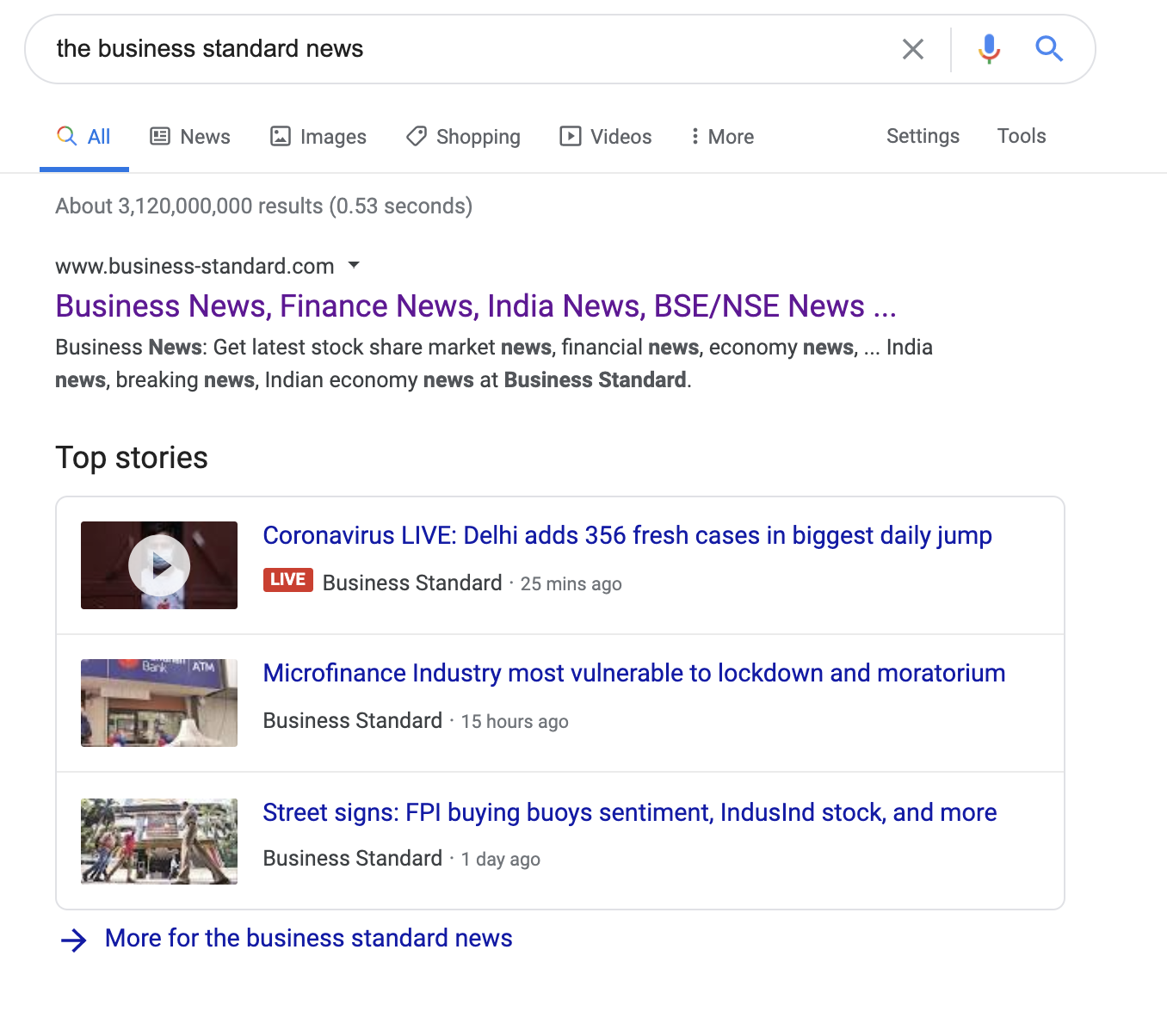 So even if the author of the virat tweet about Robertson had quoted the source as the Business Standard News — it wouldn’t have necessarily rung any alarm bells!

You might be thinking, “Why is this a big deal? It was just a bit of satire that people fell for — where is the harm?”

The problem is, you can’t apply double standards to disinformation and misinformation. If you’re horrified by people spreading hysteria that can cost lives in the middle of a pandemic — you can’t give them ammunition to do so.

In other words, if you don’t want your grandmother to send articles to her quilting appreciation group about how we must halt vaccine research because it is Satanic, you can’t turn around and retweet a fake story about Pat Robertson blaming “ladies’ private parts” for the pandemic.

Or, at the very least, undo the retweet, and tell your followers that you’ve been had.

We all hate eating crow, but sometimes, it is necessary.

Where Do We Go From Here?

A pandemic is a time of anxiety, and anxiety is the perfect breeding ground for fakes, hoaxes, rumors, and lies.

While social media greatly amplifies false information and speeds up its spread, in many ways, this phenomenon has always been with us. Remember that time European Jews were blamed for the Black Death, for example?

Having a sense of perspective is important in a time like this. As is the understanding that many people spread lies completely unwittingly.

Any long-term solutions to the spread of false information online must factor in intent — most people pushing this stuff aren’t evil masterminds. This is especially true of religious communities where literally communing with one another is a big aspect of life to begin with. People geta bit of “news” about how “aborted babies” will be used in a COVID-19 vaccine and feel it is their spiritual duty to share it.

By ascribing these people the role of evil masterminds, we lend the lies and hoaxes that much more power.

What matters more in times like these is simply shining a light on what is happening. This is why I look forward to hearing from those of you who are plugged into these networks — what patterns have you noticed? What conclusions have you drawn?

Let me know in the comments below, and stay healthy and safe in the meantime.