In the last few years the US military has carried out a series of airstrikes using a secretive weapon.

To this day, the US authorities have made barely any public statements about the R9X Hellfire missile.  It appears to be used as a targeted assassination weapon against high-value targets: commanders and other prominent individuals. Over the last three years there have only been 11 confirmed cases involving the weapon. Many of these took place in Syria, although the R9X missile is believed to have been used in Afghanistan, Libya, Somalia and Yemen.

One such case occurred in February 2017 when Abu al-Khayr al-Masri, an Al-Qaeda deputy leader, was killed in what appeared to be a drone strike in Syria’s Idlib Province. However, there was no explosion. Instead, the roof of his car was torn open, as though sliced with a massive razor.

Few knew at the time that this was the hallmark of the R9X Hellfire missile, about which there has since been much reporting in international media. That’s because unusually, this missile carries no explosives. The R9X instead destroys its target using its kinetic energy and six blades that are deployed from the missile before impact. This minimises the missile’s area of effect, ostensibly reducing the chance of civilian fatalities, while resulting in a catastrophic effect on anyone unfortunate enough to be directly hit by it.

But human rights defenders have cast doubt on the idea that the R9X is a humane alternative to more conventional missiles and armed drones. As Letta Tayler, an Associate Director of the Crisis and Conflict Division of Human Rights Watch (HRW) pointed out in an interview with Bellingcat and Newsy, “part of the danger here is that these weapons seem so failsafe […] but the R9X is only going to be as good as the intelligence used to guide it. Even if the US determines it wants to kill a particular person, that doesn’t mean that it can legally do so.”

Given the prominence of its targets, tracing airstrikes by the R9X could be of importance to researchers watching US activity in several conflict zones. The effect it has on its target and the remnants it leaves behind means that the R9X Hellfire missile leaves a distinctive signature. Here’s what to look for.

The R9X, or to give it its full name the AGM-114R9X, is an air-to-ground missile (AGM) with reportedly six blades. There does not appear to be any public images of this missile before it has been fired. However, given that the R9X is a modified version of the well-known Hellfire family of missiles (code 114), and based on fragments recovered from the scene of attacks, it’s possible to make an educated guess about what it looks like. 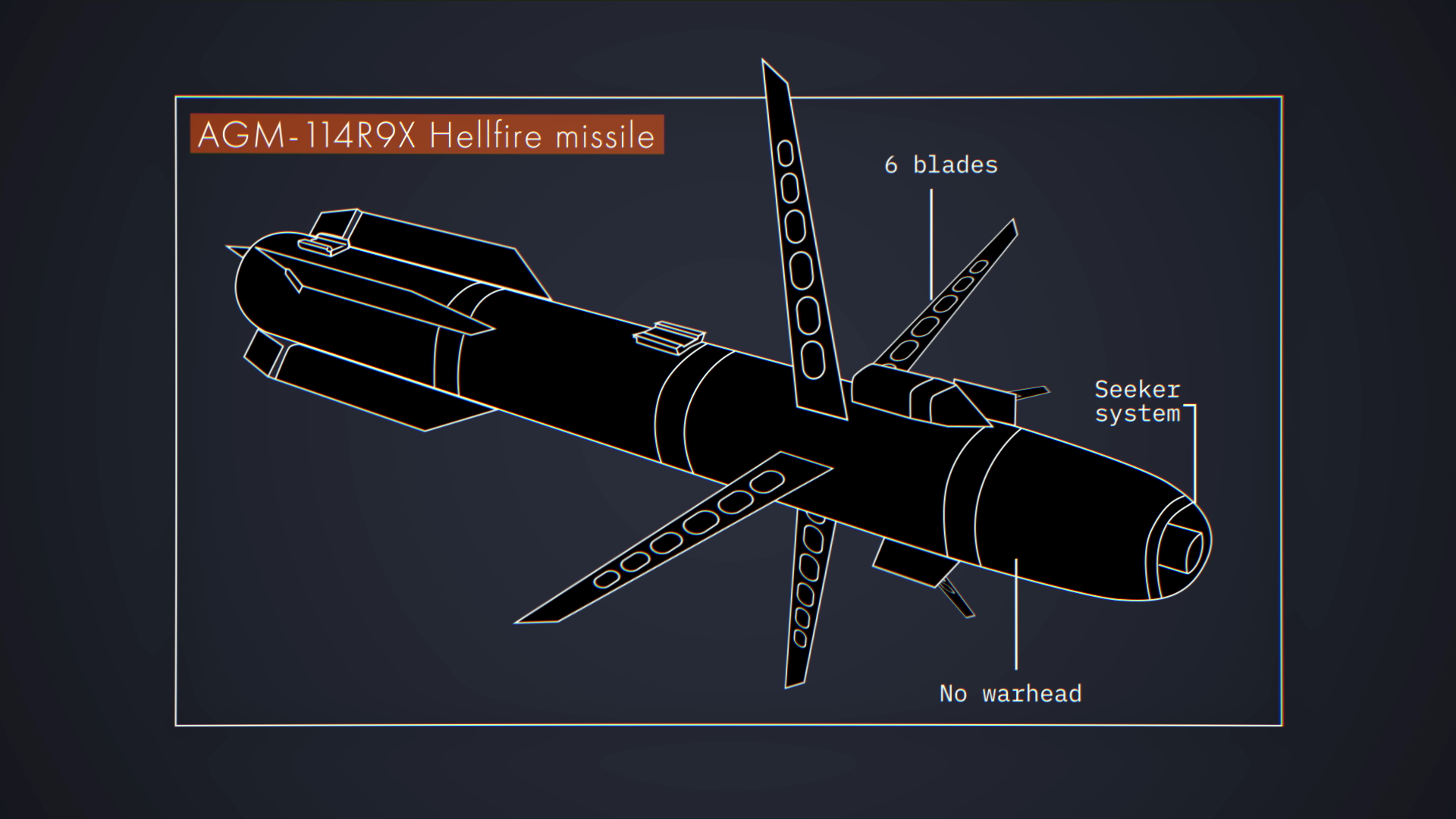 The fragments that appear in open sources have all suffered heavy damage, however certain parts of the missile are visible and appear to be unique to this specific type of Hellfire missile.

The blades themselves seem to fragment on impact. So far, no complete blade appears to have been recovered from an R9X strike. Those fragments that have survived indicated it is unpainted metal with cut-outs, likely to save weight.

The point at which the blades attach to the R9X missile. Note the holes visible within the blades themselves. Image courtesy of El Dorar

Another distinctive fragment which has shown up after an R9X strike is a red ball. This has been documented within relatively intact R9X remains as well as at the scene of at least one other strike in Syria. The Drive’s War Zone, a US defence blog, identified this as a pneumatic accumulator and added that, though distinctive, this ball is not unique to the R9X and features in other types of Hellfire missile.

#PT debris of a Hellfire missile, the red sphere of a pneumatic accumulator, common to many AGM-114 variants – unless that's just a pomegranate pic.twitter.com/eBhOzQ5qyz

This video of the aftermath of another R9X airstrike in Idlib airstrike is currently the most clear publicly available example of a largely intact R9X missile. Please note that we do not believe the quoted tweet underneath this video depicts one of the blades, but rather trim from the vehicle that was struck.

As can be seen, externally it appears to be consistent with a normal Hellfire missile, but with a unique internal construction. The same video also allows us a good look at the external markings of the missile, including the “R9X” designation.

We can also see from this video that the weight of the missile is 49 kg, which is similar to the many other Hellfire variants.

As far as can be ascertained, at the time of writing the R9X has only been used to target individuals in unarmoured vehicles. With their relatively light and easily-penetrated metal skin, the bodywork and windows of such vehicles testify to its force.

When struck by a conventional missile, the explosive warhead creates overpressure, or a blast shockwave above normal atmospheric pressure. Usually this results in a vehicle’s bodywork being severely damaged, with windows blown out and large parts of the bodywork thrown from the vehicle. There may also be multiple small holes from the fragmentation of the warhead blast.

Because the R9X does not have an explosive warhead, vehicles hit by it tend to suffer significantly less damage than from a conventional munition. Car windows not in the direct line of the missile appear to be able to survive its impact, and the car exterior is generally more intact. However, these lower levels of damage are not a definite indicator of an R9X strike. Other munitions exist which use low-yield or inert warheads which can result in similar levels of damage.

1 killed after an airstrike targeted a car in Western Gaza. Impressive precision. Reminds me of the R9X strikes in Syria but as far as I know, Israel do not possess them. pic.twitter.com/cfmIc64JF7

The most definitive indicator of an R9X strike is the tell-tale slices where the blades have impacted a vehicle. These slices appear to be a unique marker of an R9X and are extremely distinctive.

In the image below, distinctive damage can be seen to the car in which the Al Qaeda militant was travelling: 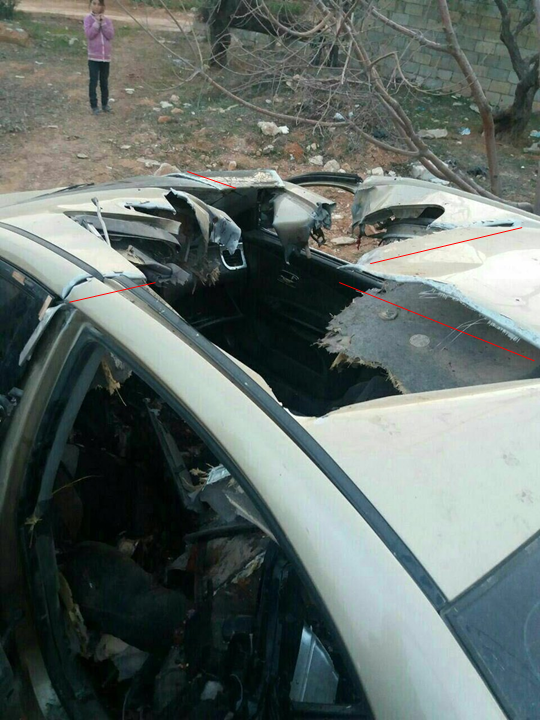 Note the very clean slices in the bodywork of the vehicle. Courtesy of Tobias Schneider.

Sometimes multiple missiles appear to have been used on the same target, resulting in a much less clearly defined set of slices. Despite this, the distinctive slices are still visible within the remains of the bodywork.

This can be seen in the roof of a car targeted in another airstrike in Idlib Province, over three years since al-Masri’s death: 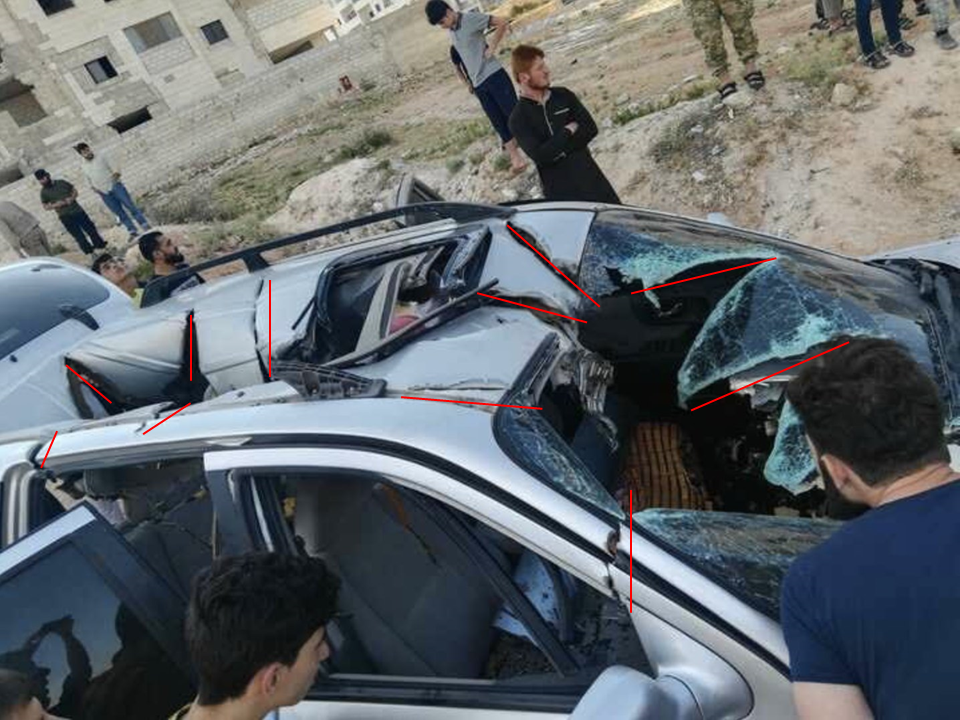 Strike on 14 June 2020 in Idlib Province, Syria. Note the multiple clean cuts in the body of the car, indicating multiple missiles were used. Image courtesy of MEMA Missiles

The internals of vehicles hit by the R9X are usually destroyed beyond recognition by the impact of the missile, but usually do not show any indication of being exposed to high temperatures such as burning. However, this is not a strong indicator given that it is entirely possible for a vehicle to be hit by fragmentation from a conventional missile and not burn. Conversely, an R9X airstrike could pierce the fuel tank and start a fire.

The R9X is an unusual weapon system, and not just because it uses six blades to destroy its target. It is a missile that is shrouded in secrecy, but announces its presence with an extremely distinctive signature. Though designed to reduce the fatal radius of a conventional munition, it has a profoundly traumatic effect on the bodies of those targeted.

Further R9X strikes in the future cannot be ruled out — they will likely be made on prominent individuals in targeted strikes. By looking out for the distinctive fragments and witness marks of this missile, it will be possible to establish where it has been used.