(Please contact the author via the comments feature to ask additional questions, which will be answered as time permits)

VX is a chemical warfare agent. It is part of the family of chemical warfare agents known as the nerve agents, because they affect the chemistry of the human nerve system. There are two main families of nerve agents, the G-series and the V-series. The G-series includes such nerve agents as Tabun, Soman, and Sarin. VX is the principle member of the V-family. The long discontinued pesticide Amiton (VG) is also a member of the family. 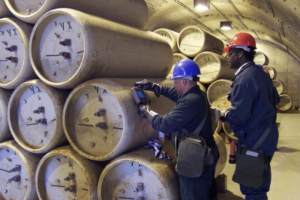 VX in 1 ton containers, being inspected by OPCW inspectors in the USA.

What does the name mean?

The actual name of VX is hopelessly complex for routine use: Ethyl ({2-[bis(propan-2-yl)amino]ethyl}sulfanyl)(methyl)phosphinate.  VX is the NATO digraph for this chemical. NATO assigned two letter codes for all of the various chemical warfare agents. For example, GB is Sarin and HD is Distilled Sulfur Mustard, also known as “Mustard Gas”. It is reported in several sources as well as anecdotally that the V-series of agents was designated V for venomous.  (If anyone has some documentary evidence from the 1950s on this, please contact me.)

Is the name “VX Gas” accurate?

It is not accurate to call VX a gas. As I will discuss below, it has an extremely low vapour pressure and a high boiling temperature. It is a liquid. Indeed, even the phrase “nerve gas” is highly inaccurate as all of the nerve agents are liquids at normal temperatures.

The word “volatile” is often misused and various people have referred to VX as being volatile. Volatility, in chemistry, is the propensity of a substance (solid or liquid) to evaporate or vaporize readily under normal conditions. By this definition, VX is not volatile.  VX is a large, heavy molecule and as such should not be referred to as a “gas”.

In military terms, VX is classed as a persistent agent, in that liquid contamination will remain for a very long time after use. 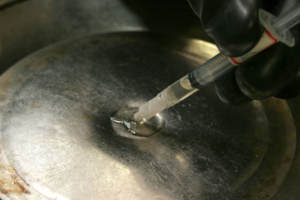 VX in use in a live agent training facility in the US. (Public Domain Image)

No. The word toxin is similarly misused with high frequency. The definition of toxin is a toxic or poisonous substance produced by the biologic processes of biological organisms. Snake venom is a toxin. But being wholly synthetic, VX is not a toxin.

What are VX’s physical properties?

This table, extracted from page II-27 of the US military’s Field Manual 3-11-9 (January 2005) summarizes the key physical characteristics of VX. This information is in the public domain. 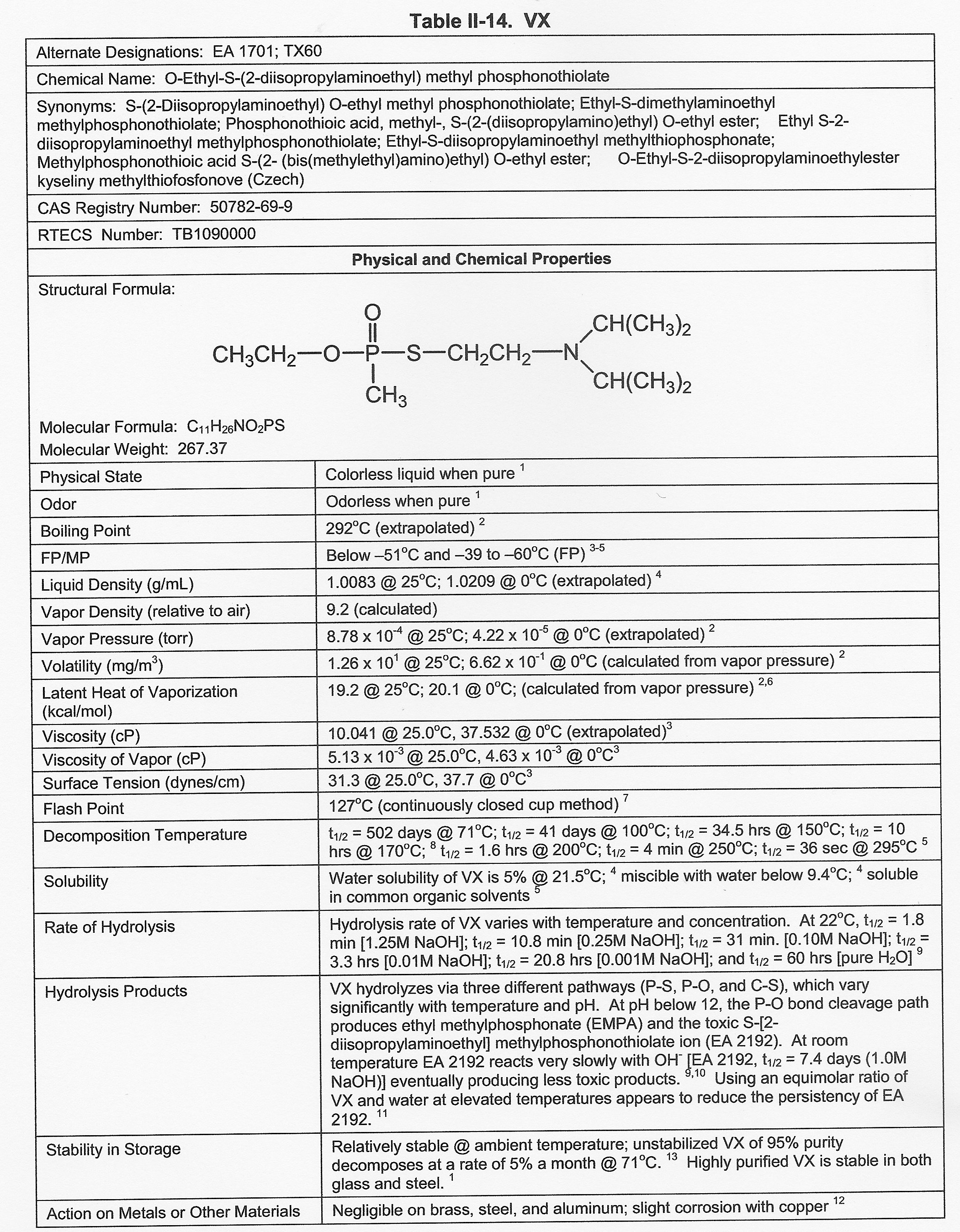 The important points to take from this chart:

How long does VX remain in the environment:

VX, due to it’s liquid form and very low volatility, will remain for a very long time, depending on the characteristics of the surface material, ambient temperature and presence of moisture. Under some conditions, VX could last for many months.

How does VX affect the human body?

VX works like all of the other nerve agents – they attack the human body’s nervous system. VX can be absorbed through the skin or eyes. It can be inhaled, although the most likely way for this to happen is through a spray or aerosol, due to the non-volatile nature of the chemical. In addition, it could be ingested in food or drink.

The human nervous system requires a delicate balance of chemicals to regulate itself. VX binds to a chemical known as acetylcholinesterase and, in doing so, disrupt the electrochemical reactions required for the body to operate properly. The binding of acetylcholinesterase leads to a build-up of acetylcholine, which then in turn leads to a syndrome called a “cholinergic crisis”. In effect, the nervous system starts to over-act and muscles and glands start to work over-time.

The signs and symptoms, and their order of appearance, vary depending on the route of exposure. These are drawn from the Textbook of Military Medicine volume on chemical warfare agents:

Rate of Action: Minutes to hours after exposure

It should be noted that miosis (pinpointing of eye pupils) is often a late sign in situations where the victim is exposed only to liquid.

Rate of Action: Seconds to minutes after exposure

How dangerous is VX?

VX is extremely dangerous by contact with skin or eyes. Again, as said above, the scenarios whereby it is immediately dangerous by inhalation depend largely on making a spray or aerosol of fine droplets that can be inhaled. It should be noted that the other characteristics of VX are not dangerous. It is not flammable, explosive, or corrosive. Therefore, if contact with the skin can be avoided, it is actually easy to handle. Plastic, glass, or metal containers are adequate for storing and moving VX.

What is the history of VX?

VX was discovered in Britain by scientists working for the chemical company ICI. They were working on pesticides. In fact, a sister compound of VX, Amiton, was briefly on the market before being banned as too dangerous. The British government gave technical knowledge to the United States, which produced VX for use in weapon systems. The US considered VX to be a replacement for Sulfur Mustard. The US produced VX at a facility in Newport, Indiana from 1962-1968. The Soviet Union produced a slightly different molecule, often referred to as “Russian VX”, with largely the same characteristics. Iraq is known to have produced VX. Fragments of Iraqi missile warheads recovered after the Iran-Iraq war showed traces of VX.

Most of the US chemical stockpile of VX has been destroyed, while remaining small quantities await destruction as part of a decades-long campaign of chemical demilitarisation. The use of VX, or indeed, any lethal chemical warfare agents, has not been part of US military doctrine or training for a number of decades.

How was VX meant to be used as a weapon?

Generally, with only one noted exception, VX weapons were generally designed to spread a mist of droplets, for the purposes of causing immediate casualties (either through inhalation of droplets or contact on skin) and long-term contamination of terrain and equipment. For this reason, most VX weapons were designed to burst or spray above ground level. Known weapon systems for dispersal of VX included: 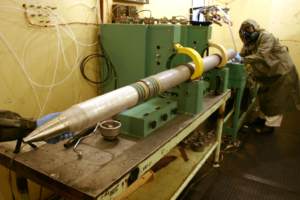 A US M55 Rocket, which contained either Sarin or VX. Awaiting destruction.

VX was considered to be an area denial weapon. VX could be used to make airfields and ports contaminated, and could contaminate large amounts of military equipment, such as pre-positioned stockpiles of armoured vehicles (e.g. US POMCUS/REFORGER sites in Western Europe during the cold war).

Is it easy to make?

VX is not easy to make, particularly in quantity or in the purity needed for long-term storage. The US devoted significant effort to develop the industrial scale production facility at Newport, Indiana. It took years and many PhD’s to work out the problems and issues of VX production. However, small quantities can be done in a laboratory if access to (proscribed or restricted) precursor chemicals can be achieved. The extremist religious cult Aum Shin Rikyo managed to produce small quantities of VX, although they invested a very large amount of money and effort to be able to do so.

Has VX ever been used in an assassination?

The Aum Shin Rikyo cult used VX to attack three people, one of who died. This occurred in late 1994 and early 1995. This attack is described in several documents and websites. (Here and here.)

Is there a way to treat exposure to VX?

Treatment of someone exposed to VX requires both general supportive care, decontamination, and specific drug interventions. Supportive care includes making sure that the airway is kept clear, and that breathing and circulation are maintained. Decontamination is the systematic removal and/or neutralisation of any VX on the body. Soapy water isn’t bad for this in the lack of a more sophisticated decontaminant. Drug therapy typically includes atropine (to inhibit excess acetylcholine), an oxime – 2-PAM chloride is one in current use (to reactivate acetylcholinesterase that is bound to VX molecules), and anticonvulsants, such as Valium, to control convulsions and spasms. A lengthy discussion of treatment of nerve agents is found in Medical Aspects of Chemical Warfare available online.

What about pre-treatment – can you give yourself a medicine to prevent VX poisoning?

There is such a thing as “pre-treatment” for nerve agent poisoning. Generally, this involves taking a medication from the carbamate chemical family (e.g. pyridostigmine bromide) that temporarily binds with some of the acetylcholinesterase in the human body. However, it binds in such a way as to be easily re-activated by proper administration of antidotes. Pre-treatment does not reduce your vulnerability to VX exposure, nor does it prevent the appearance of signs and symptoms. It merely improves the efficiency of one type of antidote, oximes.   The use of nerve agent pretreatment was principally advocated as a countermeasure against the Soviet Union’s nerve agent Soman (GD), which has a very fast “aging time” – i.e. there is a very short window in which the administration of oxime-based antidotes is effective.  However, there is some dispute as to whether pretreatment is useful for exposure to VX. (here)

Binary chemical warfare agents are chemical warfare agents that are created by the combination of two less-dangerous ingredients to produce the agent in question. The US military created a form of VX that could be produced by combining a chemical compound known as QL (the digraph for isopropyl aminoethylmethyl phosphonite) and sulfur powder. Exact details are still classified, but the weapon system designed for this purpose, the so-called “Bigeye” Bomb, was very complex and involved heating and mixing of the components in a specific manner that was not fully refined before the programme was cancelled. It can be inferred from now-declassified US government documents that the binary VX programme was plagued with problems and issues.

The BLU 80 “Bigeye” Bomb is pictured below. (Apologies for poor image quality, but diagrams of the Bigeye are rare.) 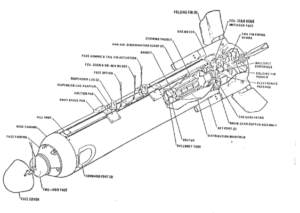