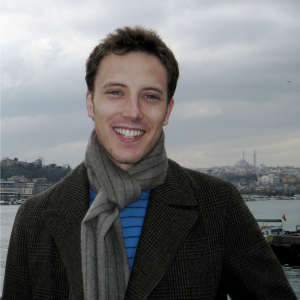 Aaron Stein is an Associate Fellow at the Royal United Services Institute (RUSI). He is also the nonproliferation program manager at the Center for Economics and Foreign Policy Studies in Istanbul, where he works on security and proliferation issues in the Middle East.

ISIS in Turkey? Using Open Source to Find Out

After weeks of clashes between the Islamic State and the Kurdish YPG in Kobane, the Turkish government has beefed up security at the border. Turkey has reportedly deployed between five and fifteen tanks between the Mursitpinar and Yumurtalik border crossings. The tanks were deployed after the fighting prompted thousands of Kurds to flee from Kobane to Turkey. The three Kurdish cantons in Syria, known collectively as Rojava, are administered by the PYD – a group with strong ties to the Kurdistan Workers’ Party (PKK). Turkey considers the PKK to be a terrorist organization and has been engaged in low-level civil conflict with the group since 1984.

Despite these measures, IMC TV, a local Turkish television station, broadcast images of numerous men crossing from Syria in to Turkey, or from Turkey in to Syria.

The Kurdish Political Party, HDP, has reported that the fighters who entered are members of IS. The ID is far from definitive. However, by using geo-location and other open source clues, perhaps I can help to identify where these men came from and who they are fighting with.

In this screenshot, ISIS gangs seen on the soil of TR. This was live on TV till the broadcast interrupted suddenly. pic.twitter.com/QbNIX1DOvd

After the video was first posted, the Turkish daily Radikal published a clearer image of some of the fighters under the headline, “IŞİD Kobani’ye Türkiye’den mi geçiyor?” (Has ISIS Gone to Kobane from Turkey?) 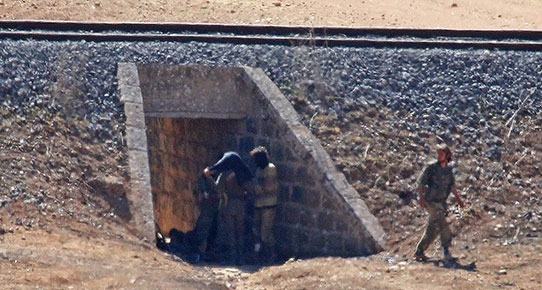 The video of the event does help to identify the location of the alleged crossing. The train tracks in the video run along the Turkish side of the Turkey-Syria border.

There are numerous underpasses in the area, but only one with what appears to be water run off that moves from Turkey into Syria. On the Syrian side of the border, the drainage ditch appears to curve from left to right (if you are looking at the picture). This also helped for me to narrow down the location. 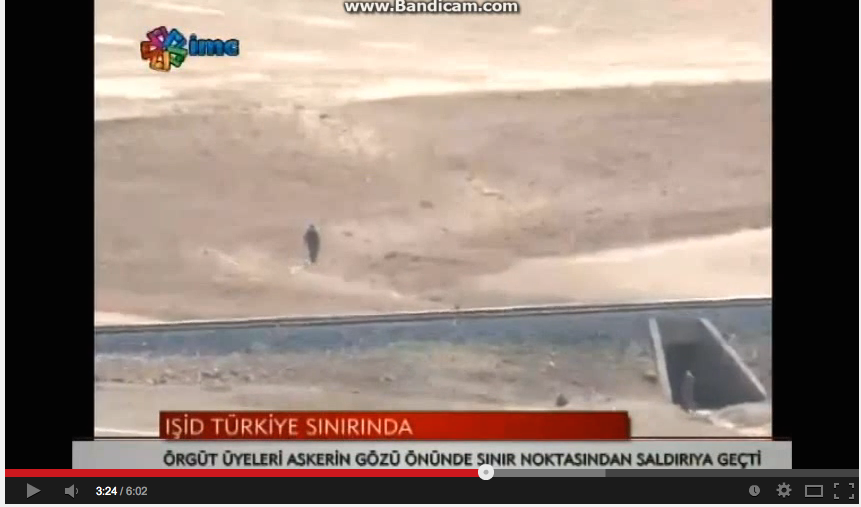 This then allowed for me to use google earth to geo-locate the position of the video. Based upon the imagery, I believe that the tunnel in question is near the border town of Karaca. 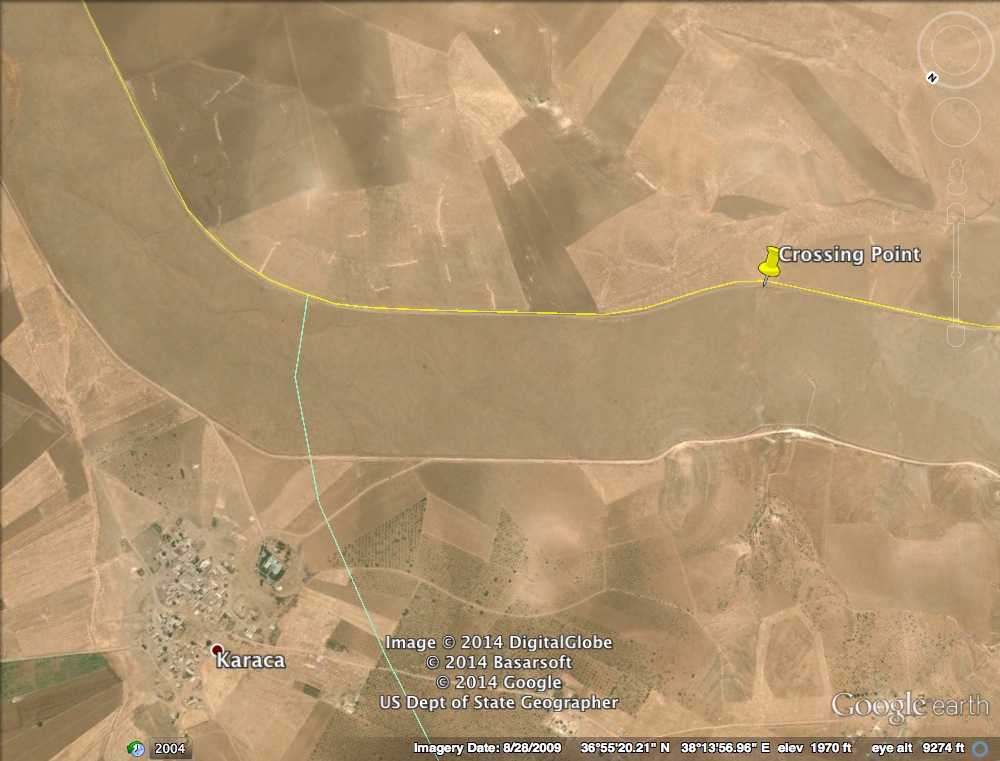 If one zooms in, you can see the distinctive drainage ditch. It is relatively straight on the Turkish side of the border, but then curves from left to right on the Syrian side. 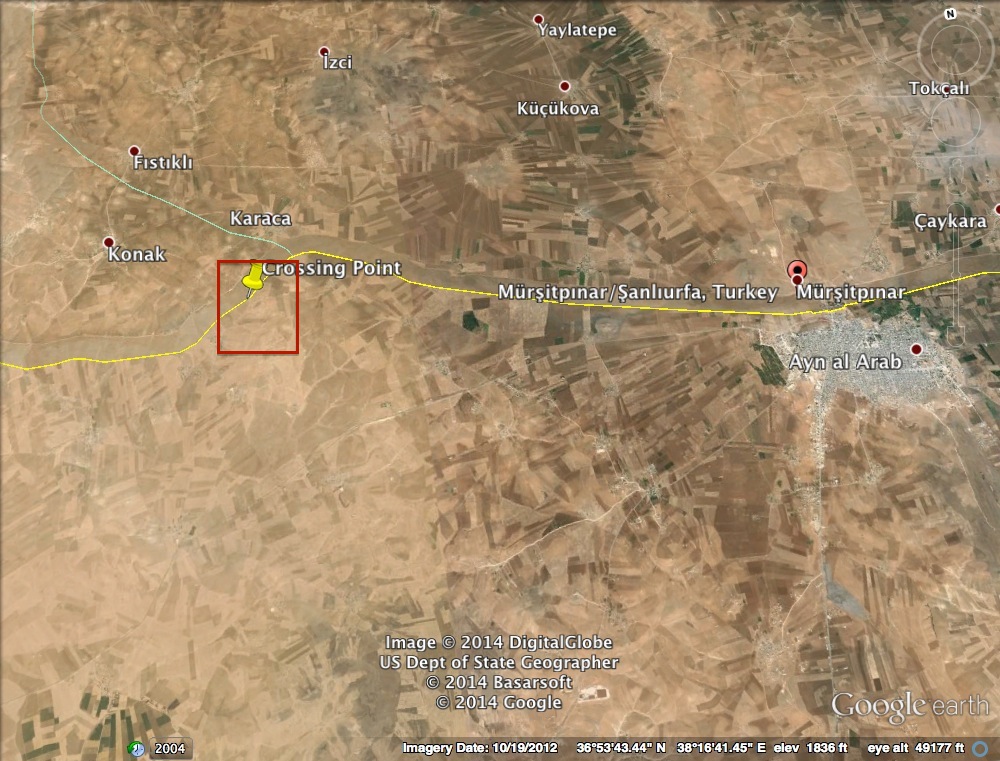 Moreover, at the end of the video, the camera pans from right to left. At the 5:02 mark, one can clearly see a small building in the background. 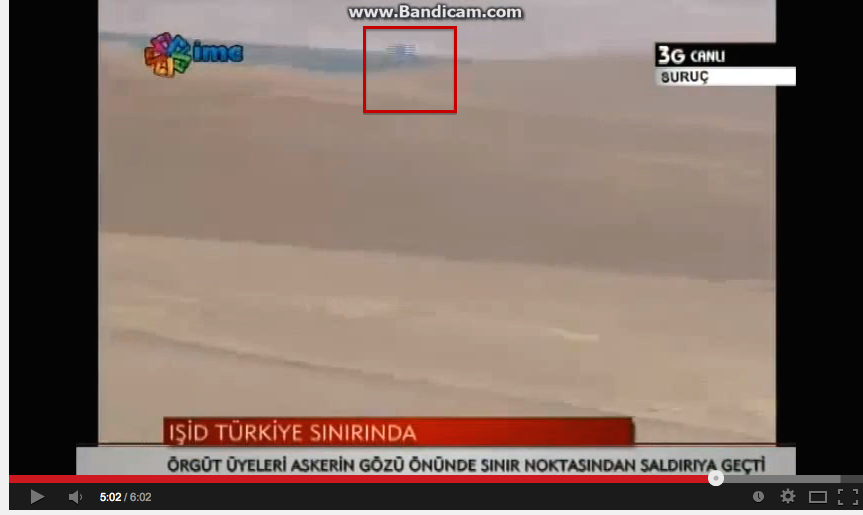 That building is visible on google earth. To the north east of the building, one can clearly see a small group of men, and what looks like a vehicle, sitting on a small hill. The location appears to be in this area. 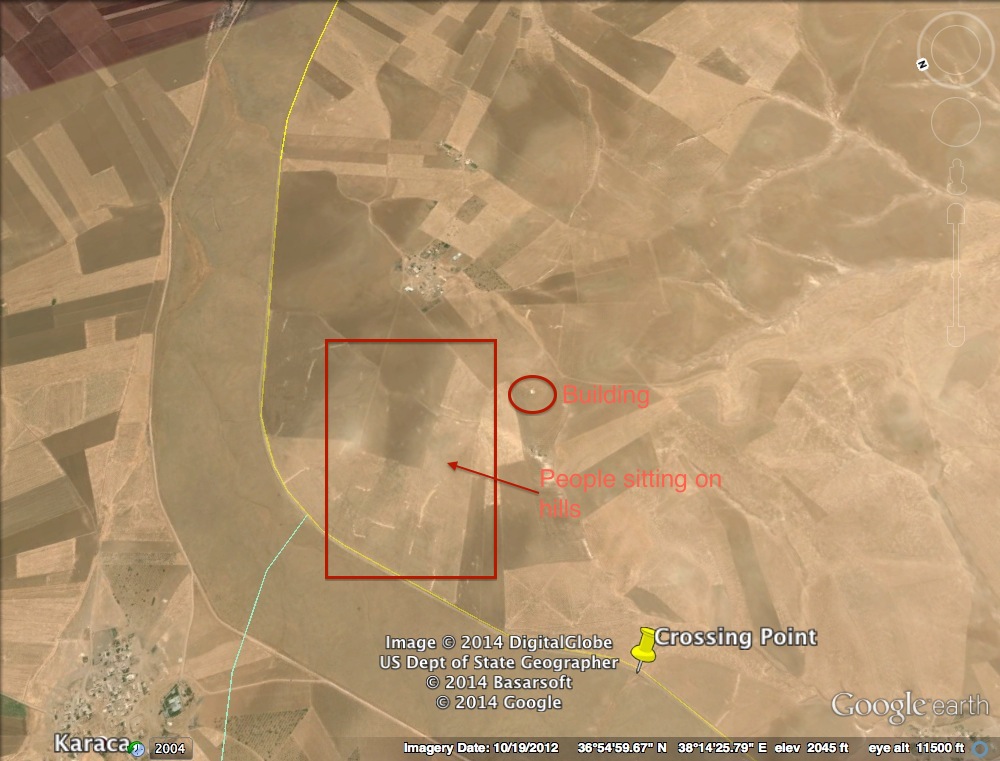 The open source evidence does suggest that the men either crossed from territory west of Kobane in to Turkey near the town of Karaca, or were crossing from the Karaca area to Syria. Those men wore military style fatigues. The men tucked those fatigues in to their trousers and boots. The location and the style of dress suggest that the men are fighters from ISIS, but that ID is not definitive. They could certainly be from another group, but that group needs to be operating in the area where I think the video was filmed. Moreover, the YPG dresses a bit differently, although there are certainly similarities to some of the images of Kurdish fighters that have been posted online.

The video, however, does not give any evidence that points to Turkey allowing IS to transit its territory to fight the YPG in Kobane. What it does show is that Turkey’s border remains porous. This is understandable, given how long the border is. But it is clear that military deployments are still sporadic, even in areas that border conflict zones.