Anatomy of a Sarin Bomb Explosion (Part I)

Part I: The Bomb, its contents, and their likely fate

The recent chemical attack in Khan Shaykhun in Syria is alleged by witnesses to have been delivered by an air-dropped bomb.  The purpose of this article is to systematically break down a Sarin bomb into its components and analyse what happens to them.  This first part addresses the contents of the bomb and how these components interact with the environment.

What’s in an air-dropped Sarin bomb? A Sarin bomb will contain more than just Sarin.

Sarin. The nerve agent Sarin will be in liquid form. However, no chemical reaction makes pure Sarin and no weapon system known to date contained just pure Sarin. Other things are likely to be present in some percentage. They are listed below.

Hydrogen fluoride (HF) : This results from the DF + isopropyl alcohol reaction. Also results from DF reacting with water.
Byproducts: chemicals that are formed by improper DF + alcohol reactions, or are left over in the DF as impurities from earlier stages of production.
Degradation products : Sarin, unless made properly, degrades quickly. And Sarin degrades in the presence of moisture. Degradation products are chemicals that result from degradation of the Sarin, such as isopropyl methylphosphonic acid, which in turn degrades to methylphosphonic acid.
Additives: Anything additional added, such as acid scavengers and anti-corrosion inhibitors, e.g. hexamine, tributylamine, etc. Also, as some additives are designed to react with the residual HF, the presence of these compounds, e.g. salts, may be present.

Fuze and Bursting charge: Explosive material to make the bomb burst open and create an aerosol. This would include the whole firing chain, with fuzing and several different explosive materials, as well as wiring.

Case material: This is the body of the bomb, including coatings and linings.

Design and Intent of the weapon 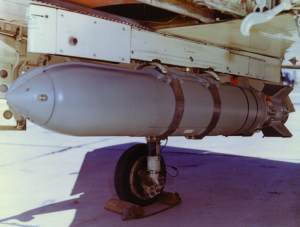 Non-persistent nerve agents, such as Sarin are used for immediate production of casualties, as their ability to produce contamination is time-limited. As such, Sarin weapons generally function on the principle of producing as much aerosol (a finely divided mist of droplets) as possible. Persistent nerve agents, such as VX, are designed to contaminate terrain and equipment, and cause immediate­­ casualties primarily by skin contact. Therefore, they are often designed to cause dispersal of larger droplets.

How big an explosive charge?

The necessary “charge to agent” ratio is needed to ensure proper dissemination of the chemical agent contents.   A bursting charge that is too small means that too little aerosol is created and you end up with a large pool of liquid or large splashes of Sarin – extremely deadly in the immediate vicinity, but not good for causing casualties over a wide area. If the bomb uses too much explosive, much or all of the Sarin is destroyed.   Sarin decomposes at higher temperatures. At its boiling point, around 150 deg C, it decomposes rapidly. A large amount of high explosives would easily heat much of the Sarin in a bomb to 150 deg C.

The thickness and structural integrity of the case of the bomb is a key factor in the size of the burster charge, and one of the reasons why air-dropped bombs have a higher ratio of chemical agent to explosive than artillery shells, which, comparatively, have a thicker case.   Data on charge to agent ratios for air-dropped bombs is rare, but some information from the old US chemical arsenal has now seeped into the public domain. These charge to agent ratios were fine tuned with extensive field testing at proving grounds and resulted in optimum formation of aerosol. For example, the MC-1 Sarin bomb contained 100kg of Sarin and had a burster charge weighing 6.8 kg, although not all of the 6.8 kg will be explosive weight, i.e. some of that weight will be wire and casing. The US Mk94 bomb held 49kg of Sarin and had a 7.3 kg burster. The Weteye bomb appears to have contained 159 kg of Sarin and had a large bursting charge, around 27 kg, leading one to deduce that it had a much thicker case. I can find no comparable statistics for USSR-produced systems.

Ever since the development of chemical bombs and artillery shells early in the 20th century, the general consensus among chemical weapons experts is that non-persistent agents are detonated at or near ground level, whereas persistent agents, whose primary purpose is contamination of terrain and equipment, are detonated as air bursts.   Non-persistent agents are designed with production of casualties in mind and keeping the aerosol at or near ground level helps to maintain a higher concentration of the chemical agent than detonating in the air. The latter serves to dilute the concentration a little or a lot, depending on local conditions. With persistent agents, the idea is to have a wider radius of dispersal of droplets to cause contamination of terrain and equipment.   The air-dropped bombs for delivering Sarin developed in the US in the Cold War were all impact fuzed for ground burst. 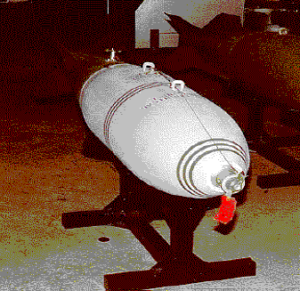 What happens when the Sarin bomb is dropped

The following chain of events happens when a typical Sarin bomb is dropped in an air strike:

This chain of events causes dispersal The Sarin inside the bomb will end up dispersed in a number of ways simultaneously.

The distribution of the Sarin into these categories will vary heavily based on the design of the weapon and a little bit from local factors, such as weather conditions and the type of surface the bomb hits. For example a bomb dropped into a swamp will behave differently to one dropped onto dry land.

The eventual fate of these dispersed bits of Sarin will vary according to the categories above. Let’s examine what happens to each category:

Part II – Coming soon. How the Sarin bomb and its contents will interact with its victims.  This will address the key issues of how Sarin enters the human body and how and why responders were seen handling victims with relatively little protective equipment. 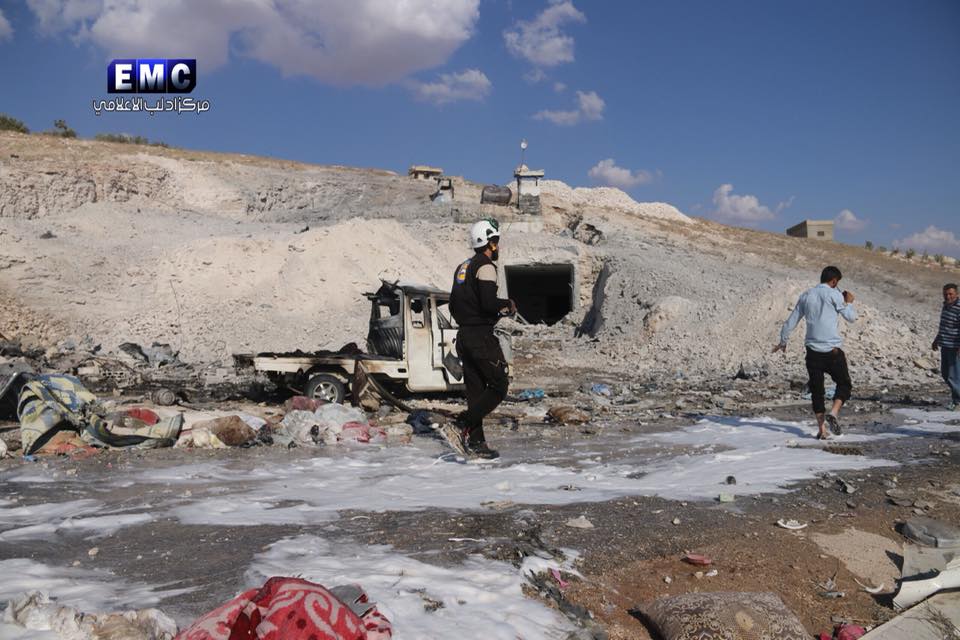