Is it Mustard or Not? Guidelines for Assessing Claimed Use of the Mustard Family of Blister Agents

There have been a number of alleged incidents claiming to involve “Mustard Gas” (i.e. Sulfur Mustard or one of its variants) in the last year. Some are more credible than others, but it seems that allegations of Mustard usage are becoming more commonplace. Some examples of claimed use include the following:

Venezuela: In February 2014, it was alleged that the Venezuelan government was using “Mustard Gas” against student demonstrators.

Ferguson Missouri: Numerous tweets and posts alleged use of “Mustard Gas” by police in August 2014. Most are now deleted.

Gaza: Several people alleged that Mustard was used in Gaza in July 2014.

Kobane, Syria: It is alleged that some sort of blister agent, possibly Mustard, was used in at least one incident by ISIS against Kurdish forces.

The MERIA Journal report noted that the type of chemical agent used on the Kurdish fighters in Kobane has been verified by its Israeli experts, who after analysing the blisters formed on the bodies on several Kurdish soldiers found that it was caused by mustard gas.
The bodies of three Kurdish fighters showed no signs of damage from bullets. Rather “…burns and white spots on the bodies of the dead indicated the use of chemicals, which led to death without any visible wounds or external bleeding,” said Kurdish health minister Nisan Ahmed.

The apparent willingness with which people jump to announce that Mustard has been used, in some cases quicker than the onset of signs and symptoms would be for actual Mustard, means that there is a definite need for a basic guideline to assess claims of Mustard use. My own experience in the last year is that very few people understand the basic facts about the Mustard-series of blister agents. The following guideline is to help assess as to whether a situation might involve Mustard. There are several minor sub-variants of Mustard, but the form generally known to have been in Syrian, Iraqi, US, and Soviet stockpiles is overwhelmingly Sulfur Mustard. Importantly, none of the sub-variants cause rapid effects.

What are the physical properties of the material that caused the problem? Sulfur Mustard or Distilled Mustard (often referred to somewhat erroneously as “Mustard Gas”) is an oily liquid, not a gas.  The volatility of liquid Mustard (i.e. its propensity to give off fumes) is actually quite low except at very high temperatures.   Mustard is considered It is a solid at lower temperatures.

Perhaps the most important question to ask if assessing a potential Mustard incident:  How quickly were people affected by the unknown substance?  Although smell will be noticed immediately, and minor eye irritation within a few minutes are possible, the effects of Mustard take hours, in some cases many hours, to develop.   The following table shows the likely signs/symptoms and their rate of onset for Mustard. 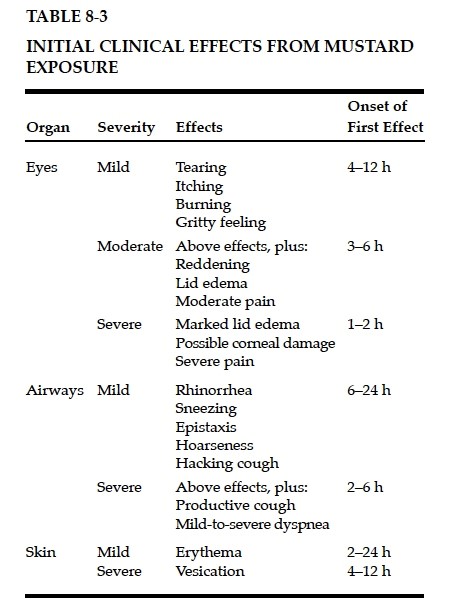 The bottom line is: if there are serious immediate effects the causative agent is not likely to be Mustard.

The lethality of Mustard is actually quite low compared to many other chemical warfare agents.  Although Mustard was used prolifically in the First World War, it was responsible only for a minority of the chemical warfare fatalities during the conflict.  Only 3% of Mustard injuries were fatal in World War 1, despite the general lack of modern medicine.  However, Mustard is theoretically capable of killing.  The important thing to note is that Mustard does not kill quickly.  Mustard generally kills from respiratory complications, after some days of illness.  The statistics about how quickly someone died after Mustard exposure during World War 1 are shown below: 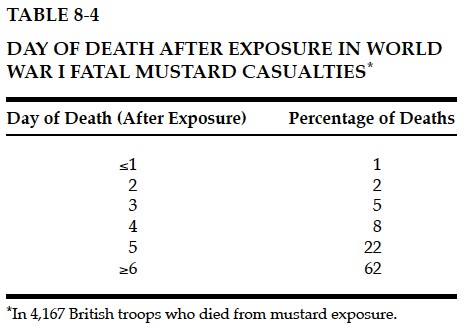 As can be seen from the table, only a total of 8% of the fatalities occurred within the first three days after exposure.

There are some loose rules of thumb, based largely on WW1 and Iran-Iraq war experiences, about how to estimate if someone has received a possibly lethal dose of Mustard:

Once again, the bottom line: if there are serious fatalities it isn’t Mustard that is the killer.  Mustard might indeed be there, but it doesn’t kill that quickly.

The information in this document and the data tables are reproduced from the US government’s reference book, Medical Aspects of Chemical Warfare, available freely here.