Those of us who live and work in London like the place, or at least tolerate it. Many of us love it. Certainly, like with any large city, there are people who dislike it. Over the last few years, however, there have been a number of fake, misleading, and/or downright hateful things spread on Twitter about London. Is this just random nonsense on the internet, or is it part of some overall campaign to accomplish some nefarious objective?

Disclaimers:  This particular series of posts is limited to Twitter. With assistance, further posts can be extended to cover other social media platforms. Some of the examples cite here contain objectionable material. It is included for instructional purposes only.

In any analytical effort, definitions are important. It is hard to go hunting for something or collect the necessary data if we do not properly identify what it is that we are looking for.

I have looked at thousands of London misinformation and disinformation tweets, and they generally follow one theme, or else multiple themes. Some themes are quite broad, while others are narrow in scope. Some tweets may fall into multiple categories. For lack of better definitions (and I would be happy to eventually sharpen these definitions further), I have developed these 11 broad categories, each with one or more examples. There are more, but this analysis, for now, focus on these 11 categories.

These tweets allege that London has “no go zones” as defined by Islam or ethnicity. Alternately, London is alleged to have areas where the police are not allowed to go  because these areas are controlled by people of a specific ethnicity or members of a specific religion. Mostly, these tweets allege “Islamic No Go Zones,” although a few have alleged “no go zones where white people/Christians are not allowed.” A previous Bellingcat article from November 2018 addressed many of the commonly found “no go zone” memes.

@SadiqKhan
If #London is so open then why are there "No Go Zones" in London?#England #CWC19

AGREE
LONDON HAS NO GO ZONES
MEANING NO WHITE PEOPLE TOTALLY CONTROLLED BY MUSLIMS
68 SHARIA COURTS TO SELF GOVERN
THAT NOT ASSIMILATION https://t.co/uUxDWKFVeB

These tweets allege that all or part of London is under “Sharia law.” Alternately, they claim that London has Sharia courts/councils that overrule English law. Examples:

#Londistan is real! The real London is long gone and taken over by Sharia Law. Stay out! https://t.co/3YYH8kMs4z

(Note that @Dolphinflats’ profile pic is a stock photo found on 679 other sites according to a TinEye image search.)

Because the police have to now thumb through two rule books to see if what someone is up to, is unlawful, these types of crimes go unpunished.

These accounts allege that London actively has, in the present, “sharia patrols” or “Muslim patrols.”

It is important to note that there were small, ad hoc attempts to do such “patrols” some years ago but the participants were arrested and jailed. One example from 2013 is described here.

These are accounts of a particular mosque being on fire. This is a fairly specific disinformation theme.

On September 26, 2015, the very large Baitul Futuh Mosque in Morden in South London suffered from a significant fire. The damage was repaired and the mosque reopened.

However, at recurring intervals in following years, waves of tweets would claim that this was happening again, in real time. 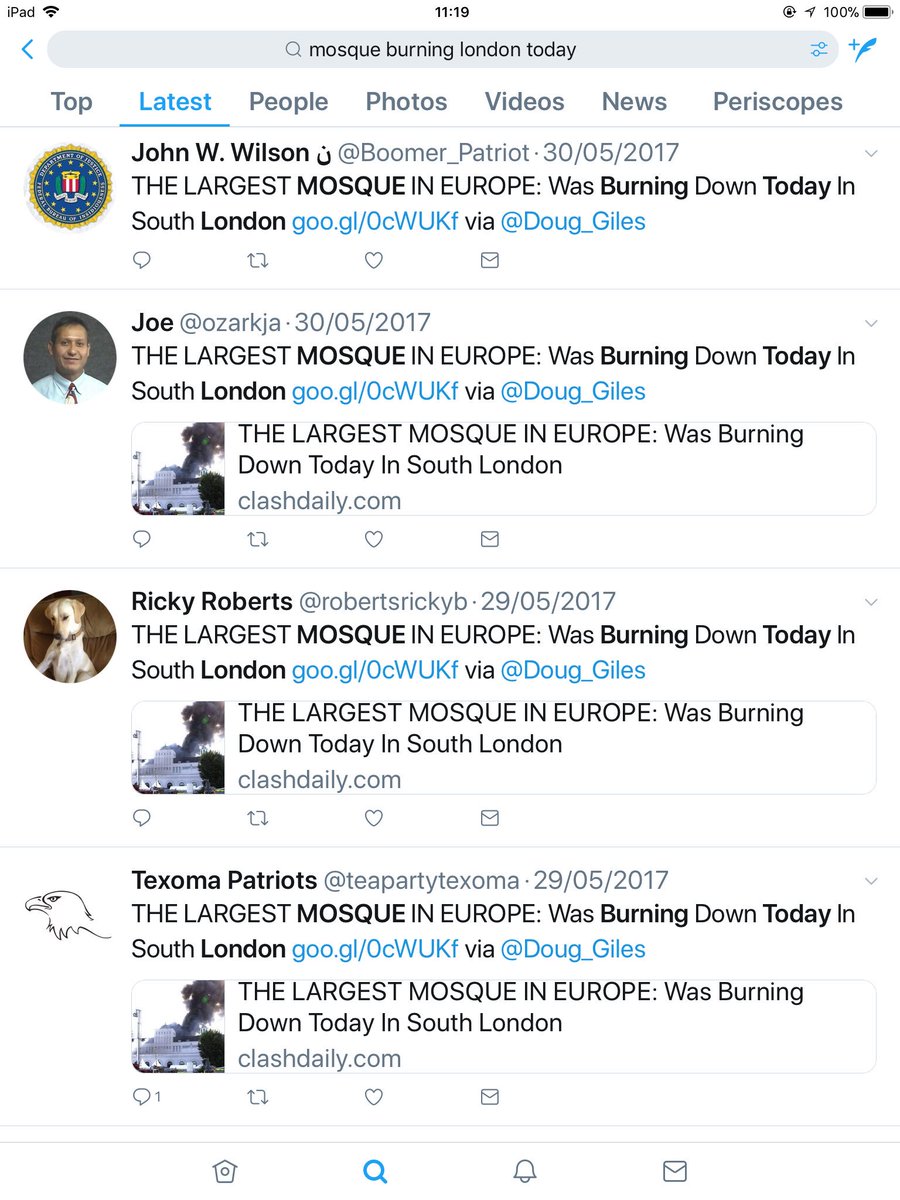 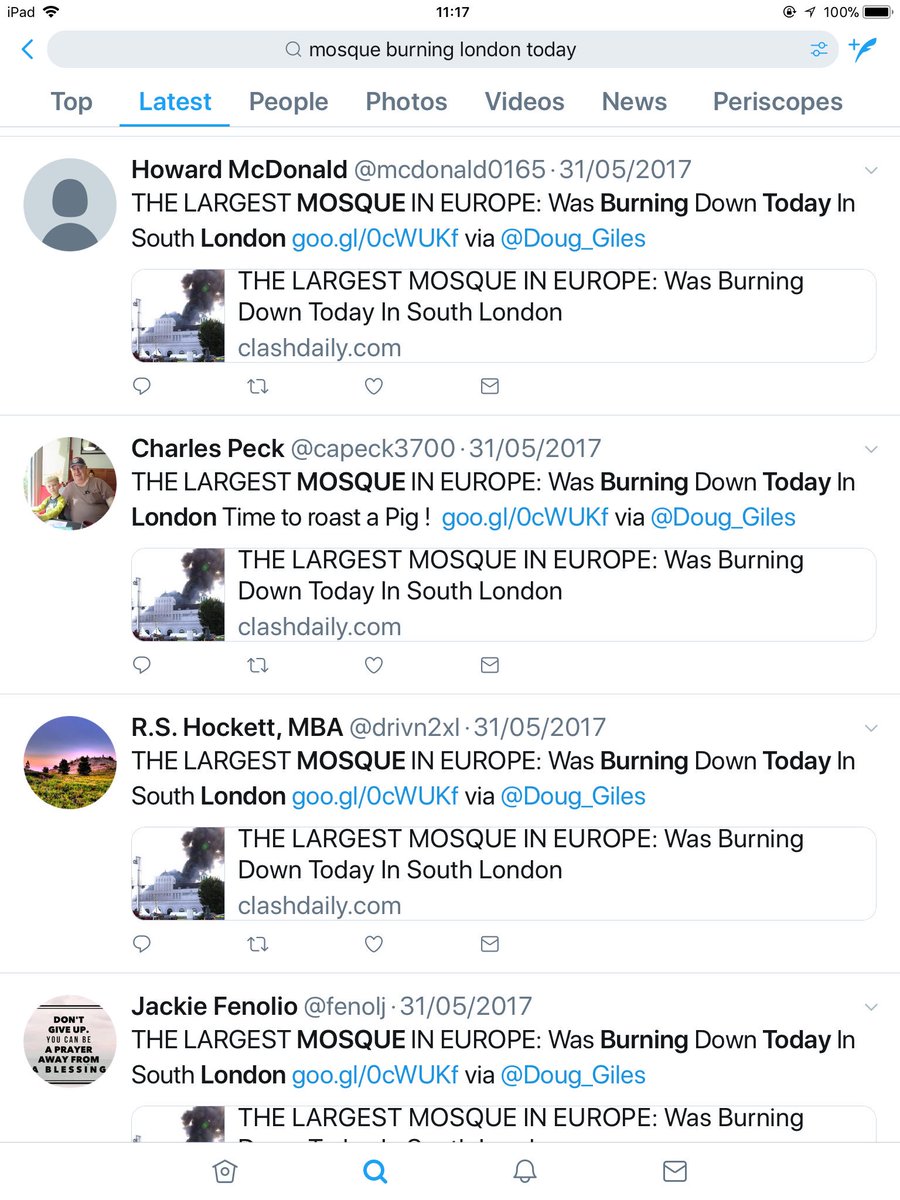 These are claims that London’s murder rate is “skyrocketing” or else is “higher than New York” or is “highest ever.”

This particular theme exploits a small set of news articles from early 2018. I debunked these claims in an earlier Bellingcat article.

There was one month (Feb 2018) where New York City actually had noticeably fewer murders than greater London.  In June 2019, there was a concentrated “fishwrapping” campaign to take one particular Reuters article  and tweet it as if it were current news. 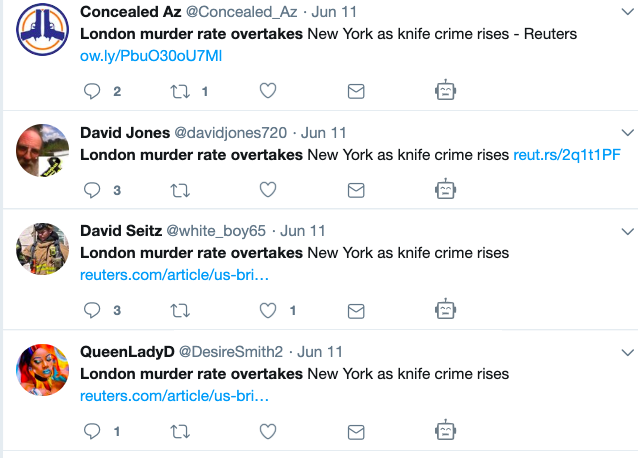 These are tweets exaggerating knife crime, such as conflating the number of reported “knife crimes” with “stabbings,” or reporting every stabbing as a “murder.” 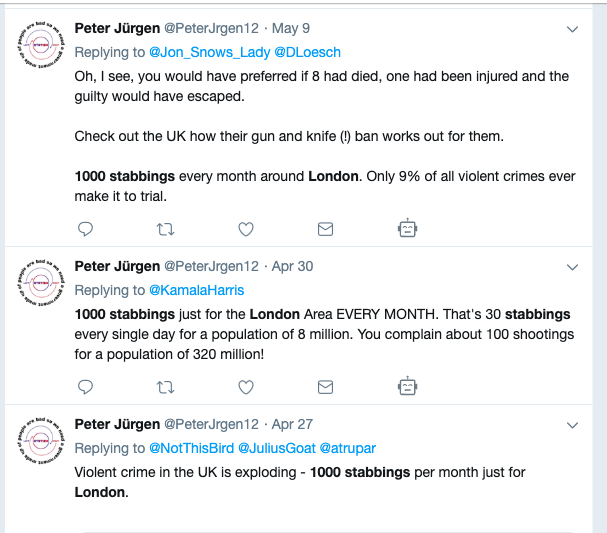 This particular theme states or implies that gun laws have “disarmed” the London population and have removed the ability of Londoners to defend themselves, as if Londoners were well-armed before the post-Dunblane firearms laws.

The Dunblane Massacre was a mass killing in Scotland in 1996, which resulted in a revision of firearms laws in the UK, banning private ownership of handguns.

Did you know that London is disarmed? Not unarmed, disarmed. https://t.co/sJGMm7U0TI

8. London Is “Bad” Because It Is “Multicultural”

These are tweets that imply that the diversity of London is a bad thing. This is a theme that can be hard to define, but it generally ties the city’s problems to one particular element — a diverse population.

5 killing in as many days in London. What a multicultural paradise.

These are tweets that are disparaging of Sadiq Khan based on his ethnicity or his Muslim religion. They often accuse Khan of being an immigrant (he is not, in fact, an immigrant) or use the racist epithet “Paki.”

Time to sock it into him too! https://t.co/PgxXNBY4GP

This category is broadly defined as a tweets that use the epithet “Shithole” or phrase “Third World Shithole” to denigrate London in general terms.

Some of this rhetoric may be inspired by U.S. President Donald Trump’s famous use of “shithole” when describing various countries whose citizens seek to visit the U.S./immigrate to the U.S.

If you want more evidence of what @SadiqKhan has reduced London to then follow this account. It's now a third world shithole ruled by violence and intimidation. https://t.co/HNn6bl8E64

11. “Londonistan” / The Idea That London Is Majority Muslim

These are tweets that imply London’s population is majority Muslim or else use the word “Londonistan” in a disparaging context.

Yeah good luck. London is majority Muslim now and they don’t like gay people. Why is everyone so shocked

There's an awful lot of muzzies in Londonistan and Corbyn ever the opportunist will stoop just as low as you want to get their vote.
Thing is living in Londonistan he thinks it represents the demographic of England stupid little Marxist creep! ? https://t.co/Z4HX88KobM

Having identified these 11 themes, I plan on following this up with a deep dive into Theme 5, i.e. the “fishwrapping” campaign to push outdated articles on London’s murder rates.

Request to Bellingcat readers:  Analysis like this cannot thrive without data. Although I am an active Twitter user, I am only moderately skilled in Twitter analytics. Assistance with this effort is greatly appreciated. You can contact me via NotOnMyWatch@strongpointsecurity.co.uk if you feel that you can provide data and/or analytical help with this effort. 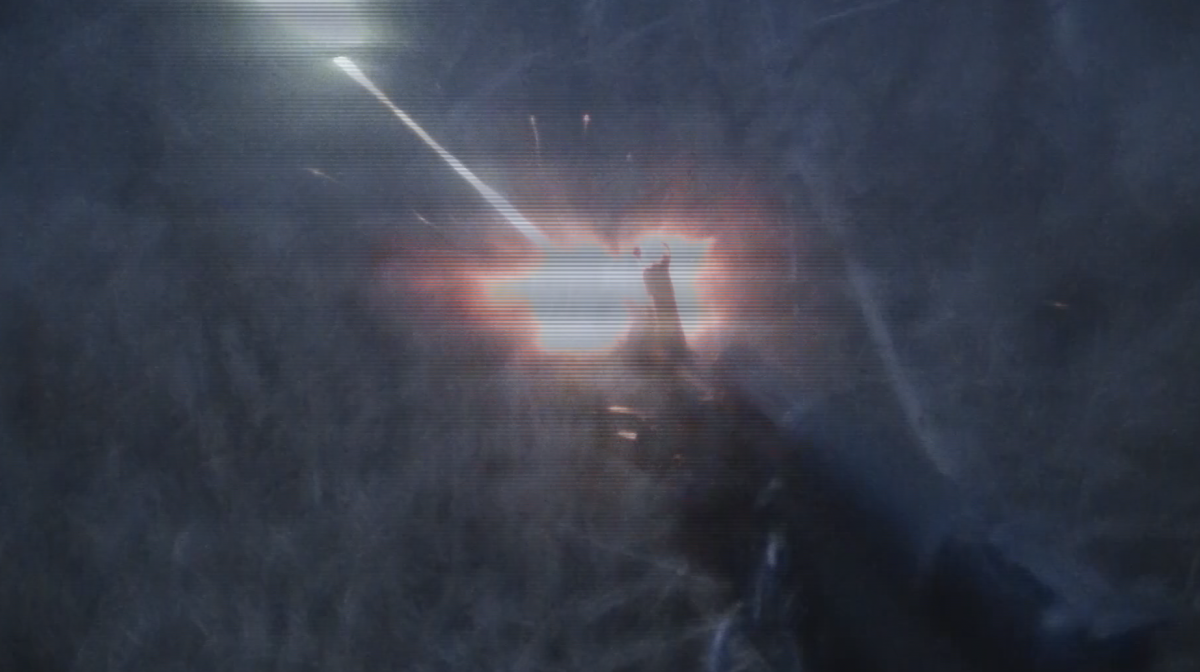