In June 2017, Bellingcat and Transparency International published a joint report entitled “Offshore in the UK” regarding Scottish Limited Partnerships (“SLPs”), their potential for misuse as a home-grown secrecy vehicle and their links to money laundering and corrupt wealth.  On 26 June 2017 the Government enacted new regulations – requiring SLPs to register their persons of significant control (“PSC”) at Companies House – a move which was intended to improve transparency and deter the abuse of SLPs as a vehicle for financial crime.  Bellingcat has continued to monitor these PSC filings, and previous articles on this subject can be found here and here.

Since our last report in November 2017, SLPs have continued to make news due to their links to money laundering and organised crime.  Examples include –

But what has really changed since the requirement to register PSC filings? Bellingcat examined the filings for all of the SLPs incorporated in 2017 to find out.

The first, and most obvious change since 2016 has been a significant fall in the number of incorporations.  2,823 SLPs were incorporated in 2017, compared to 5,215 in 2016. This is the lowest number of formations since 2012 – indicating that the new PSC rules have deterred the registration of thousands of SLPs.  Only 627 SLPs have been registered since the beginning of July.  It is clear that this initiative has been effective, if only as a short-term deterrent to the mass registration of SLPs.

A person of significant control is someone who holds more than 25% of the voting rights of the partnership. But have existing SLPs been willing to file PSC information? Of the 2,823 registered in 2017 –

This leaves 1138 SLPs who have named individuals or corporate entities as having significant control of the partnership. 905 individuals were named on the PSC documents for SLPs incorporated in 2017. Of these, 41 (or 4.5%) were British Nationals.  Ukraine can claim the largest number of individuals named as PSCs (291), followed by Russia (172) and then Belarus (52).  In total, representatives from 63 countries were named as PSCs. 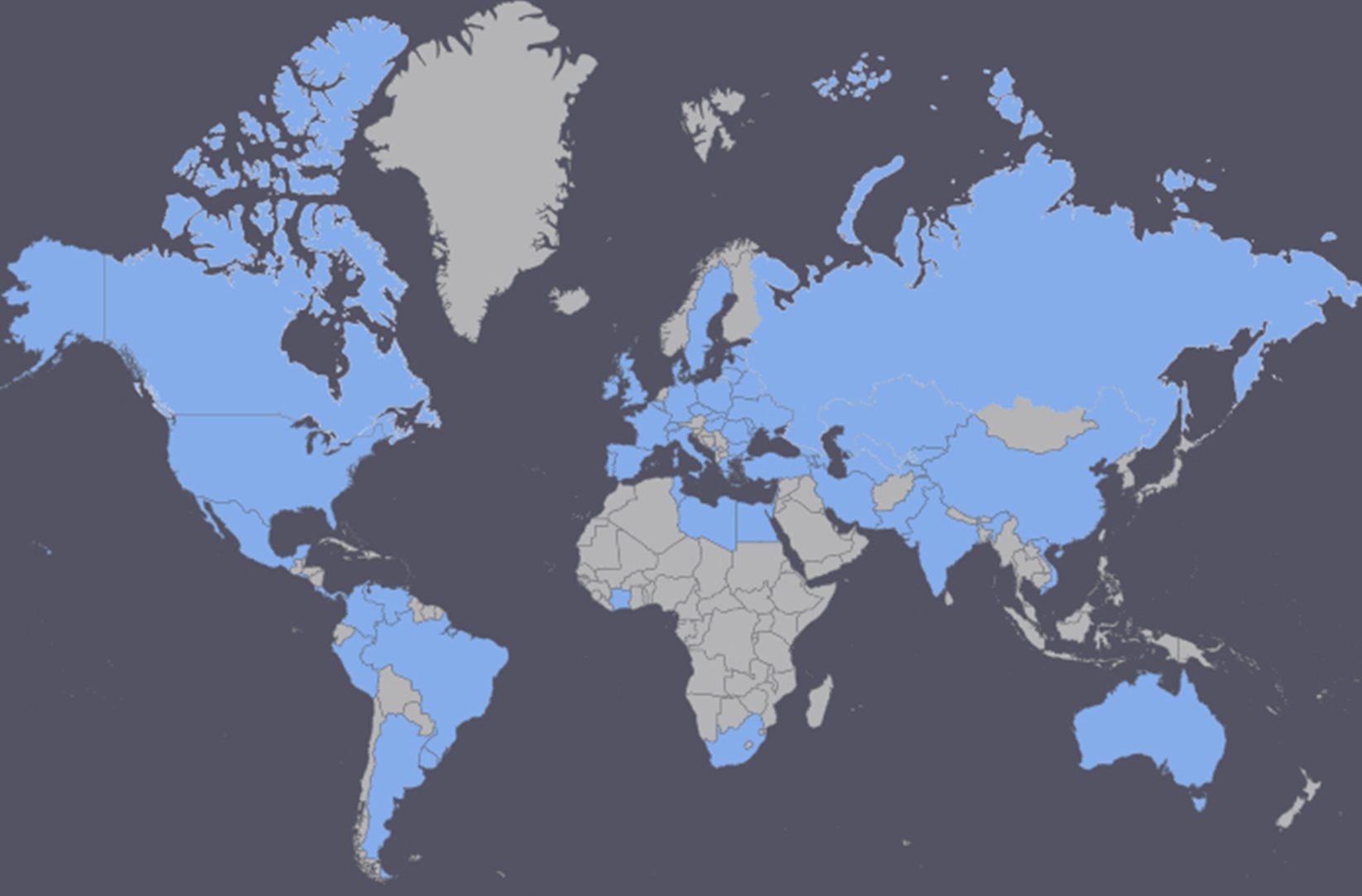 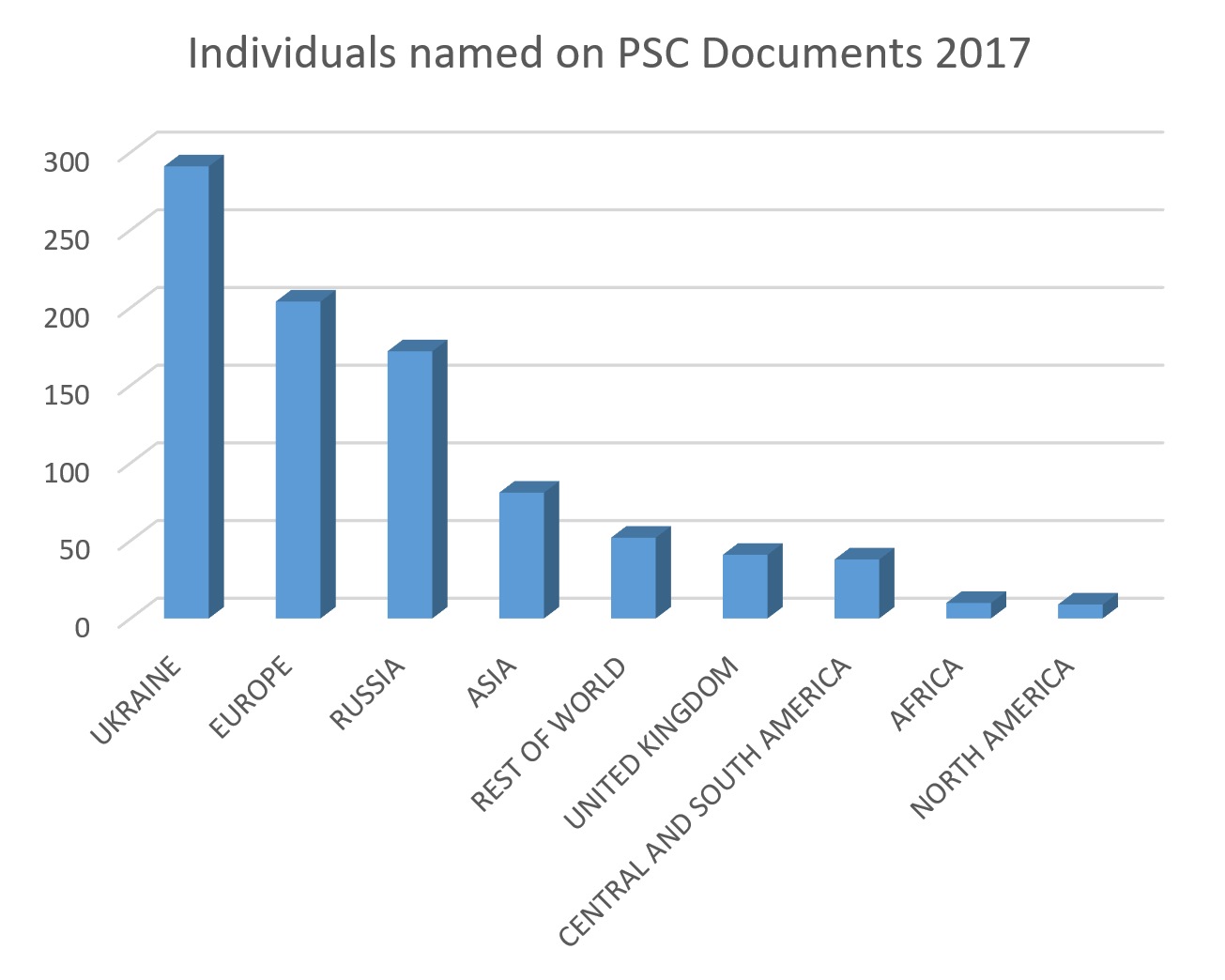 Individuals named on PSC statements rarely come from the UK. SLPs are marketed aggressively online to residents of the former Soviet Union, and this is reflected in their ownership

As well as individuals, other forms of corporate vehicle are also commonly stated as having significant control of an SLP. Bellingcat identified 24 different forms of entities with significant control, 427 in total have been named on PSC documents.  The majority of these are UK-based and appear to be part of legitimate investment vehicles.  However, some appear to be less transparent – 13 SLPs partnered by anonymous shell companies and with no registrable PSCs are themselves named as the partners of 62 SLPs registered in 2017.

Perhaps even stranger, 53 English Limited Partnerships, all of which were set up after the PSC rules came into force – and all of which have opaque corporate ownership are being used as entities with significant control.  This may indicate that rather than a deterrence, the new PSC rules are merely an obstacle for those who are determined to continue business anonymously.

For the purposes of this article, the partners of the 2,833 SLPs incorporated in 2017 were also recorded, as well as their location.  The General Partner of an SLP is, in effect, the controlling partner – as it is the General Partner who makes all the decisions concerning the management of the SLP.

Bellingcat was unable to identify the location of 459 General Partners, as there is no requirement to provide this information to Companies House. 261 were positively identified as being based in the United Kingdom.  In contrast, 812 were found to be located in the Seychelles and 527 in Belize. In December 2017 the EU named the Marshall Islands on their tax haven blacklist – 17.5% of the General Partners of SLPs registered in 2017 are based in the Marshall Islands.

68.4% of SLPs incorporated in 2017 are controlled by General Partners who have a secrecy score of more than 60 on the Tax Justice Networks Financial Secrecy Index for 2018.  The majority of these are corporate partners, but their involvement in the UK company system is not limited to SLPs.

A search was performed on Companies House to see if any of the corporate offshore partners had any appointments in vehicles excluding SLPs. Previous appointments were not included in this search.  The offshore corporate partners of SLPs incorporated in 2017 alone were found to have 3,028 appointments in other types of company in the UK. Overwhelmingly, these were Limited Liability Partnership appointments, usually in partnership with other offshore entities.

The effect of PSC rules on SLP filings

To fully understand the effect of the new PSC requirements, Bellingcat analysed every SLP incorporated after 1 August 2017 to see if the make-up of Partners and PSCs had changed.  485 SLPs were registered during this period.  The location of 397 General Partners was possible to ascertain.  119 were based in the UK, slightly behind 123 located in the Seychelles.  In total 46.8% of SLPs registered during the period were based in jurisdictions with a secrecy score of over 60 in the Financial Secrecy Index.

PSC information is now a requirement on SLP incorporation forms.  Accordingly, all of the SLPs registered since 1 August have made a PSC statement. However, around a quarter (137) have declined to name an individual or organisation, stating that there is no registrable person or have not yet completed reasonable steps to identify their PSC.

252 individuals are named PSCs, just 22 (8.7%) are British. Again, during this period, Ukrainians controlling SLPs (73) outnumber British nationals as do Russians (41).   75% of those named on PSC documents are non-EU nationals.  214 corporate partners are named as PSCs, largely UK based, and typically components of legitimate investment vehicles.

These figures indicate that although the numbers of SLP registrations have dropped, a significant proportion of SLPs still retain opaque partners in offshore havens and remain a popular vehicle for foreign nationals. Additionally, one questions whether it is really necessary to register SLPs on an industrial scale, as thousands of active SLPs already exist. As reported in the Herald on 20 February 2018 SLPs are still widely sold online for as little as 170 euros.  Bellingcat has obtained spreadsheets from Russian language websites, offering SLPs for sale together with Limited Liability Partnerships and Limited Companies.  When these SLPs are all sold will there be another boom in SLP registrations, or will this happen when rogue formation agents realise how easy it is to hide the true owners of an SLP behind further opaque partnerships?

This problem could be easily remedied. A simple example would be to prohibit the use of offshore corporate partners and request full details of partners (contact details, an address, neither of which are currently required). This would further deter those who wish to abuse the system as many already have.  This measure would not harm partnerships used for legitimate purposes, and may help to restore the damaged reputation of SLPs, an increasingly toxic brand.  On 19 October 2017, the then-Under Secretary of State for BEIS stated in Parliament that

Four months on, and the time for reform is long overdue.