Do you have more information about this photograph or the location it was taken? If so, please send information in English, Russian, or Ukrainian to the JIT via their email (contact@jitmh17.com), VK page, or WhatsApp (+31683559290). You can also comment on this article or tweet to us (@bellingcat) to discuss the geolocation of the photograph.

Today the Joint Investigation Team (JIT), the Dutch-led criminal investigation into the downing of Malaysian Airlines Flight 17 (MH17) over Ukraine, published a new photograph of the Russian Buk missile launcher that downed plane from the day of the tragedy. The image shows the right side of the Buk, loaded on the back of the white Volvo truck that hauled it through eastern Ukraine on July 17, 2014. Also visible in the photograph is the blue Volkswagen minivan that escorted the Buk through eastern Ukraine on the same day. This anti-aircraft missile launcher is Buk 332, previously identified by Bellingcat as “Buk 3×2,” belonging to Russia’s Kursk-based 53rd Anti-Aircraft Missile Brigade. 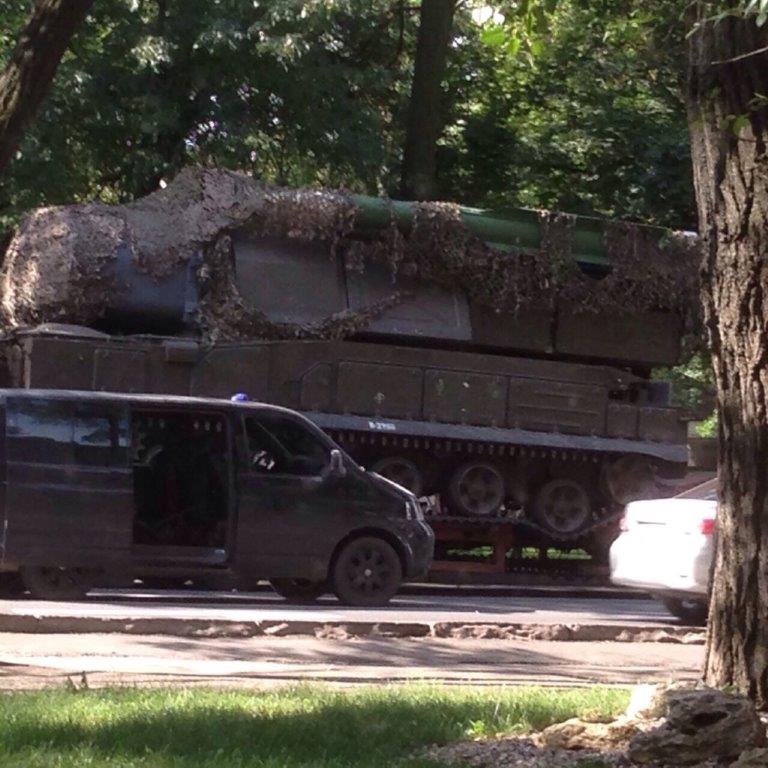 In publishing the photograph, the JIT said that the photograph was “probably taken on July 17, 2014 in the town of Makeevka, Ukraine.” By analyzing the identifying details of the Buk in the JIT photograph and comparing it to two previous videos of the right side of Buk 332, one filmed in Russia and the other in Torez, Ukraine, it becomes clear all three materials show the same missile launcher. However, it is unclear if the photograph was actually taken in Makeevka (Makiivka in Ukrainian), located just east of Donetsk.

The first of these two reference materials was filmed in Stary Oskol, Russia on June 23, 2014, uploaded to the Russian social network Vkontakte (VK) on the same day by a local. An archived copy of the video can be seen below.

A composite image showing the full filmed length of the Buk can be seen below. 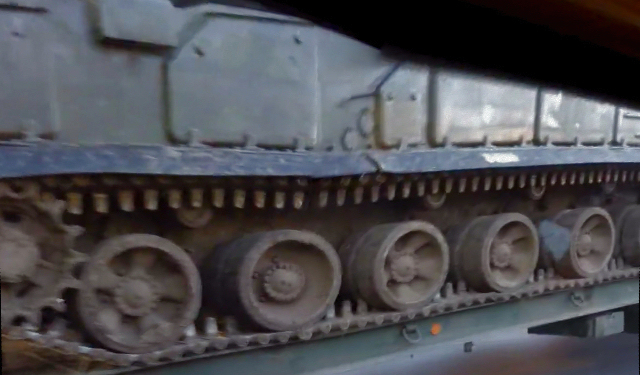 The second reference material is a video published by the JIT during their September 28, 2016 press conference. The video, which was filmed in Torez, Ukraine on July 17, 2014, was purposefully obscured in order to remove details that would allow geolocation of the filmer’s position.

A detailed analysis of the identifying details of Buk 332 can be found in our report “The Lost Digit: Buk 3×2.”

The most obvious similarity between the three images is the numerous white markings on the Buk. The fragments of the painted-over digits match up perfectly, along with the H2200 (oversized cargo code) mark on the side skirt and the gravity mark (cross-hair). The details match in both appearance and their orientation to one another. 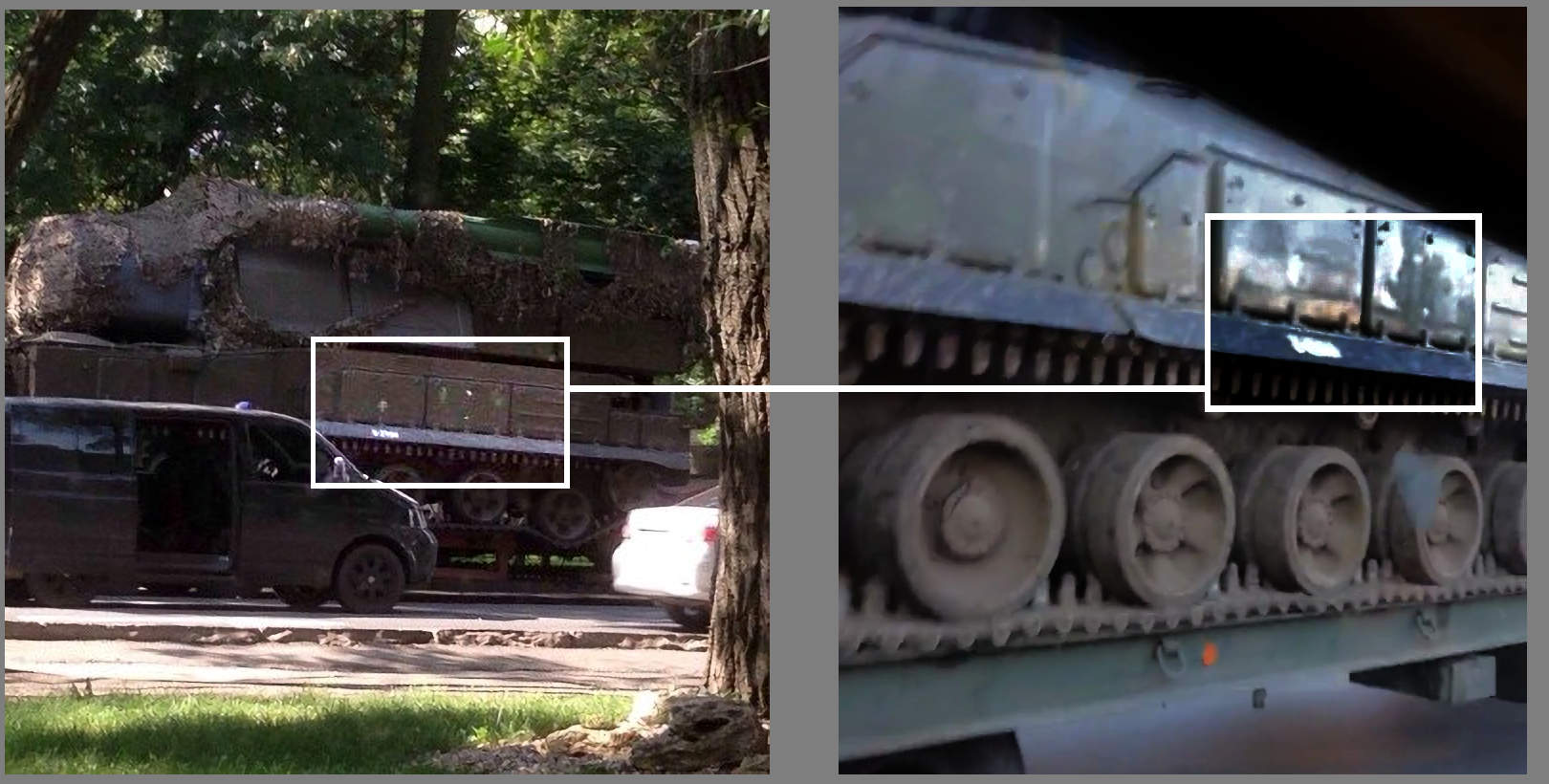 Additionally, the netting placed over the missiles is in an identical placement as it was in the Torez video and photograph. Only four wheels are visible in the new photograph, but they correspond to the Stary Oskol and Torez videos, showing that the third, fourth, fifth, and sixth wheels are spoked (the second, which is not visible in the image, is hollow). There are few identifying features on the side skirt in the newly published image, as the tear on the side skirt is obscured by the blue VW minivan, but the visible details match the two reference materials. This blue VW minivan is the same one that was photographed and filmed escorting Buk 332 throughout the day of the MH17 downing. Additionally, this blue VW minivan served as an escort to a different convoy of Russian-separatist military equipment two days before the downing. 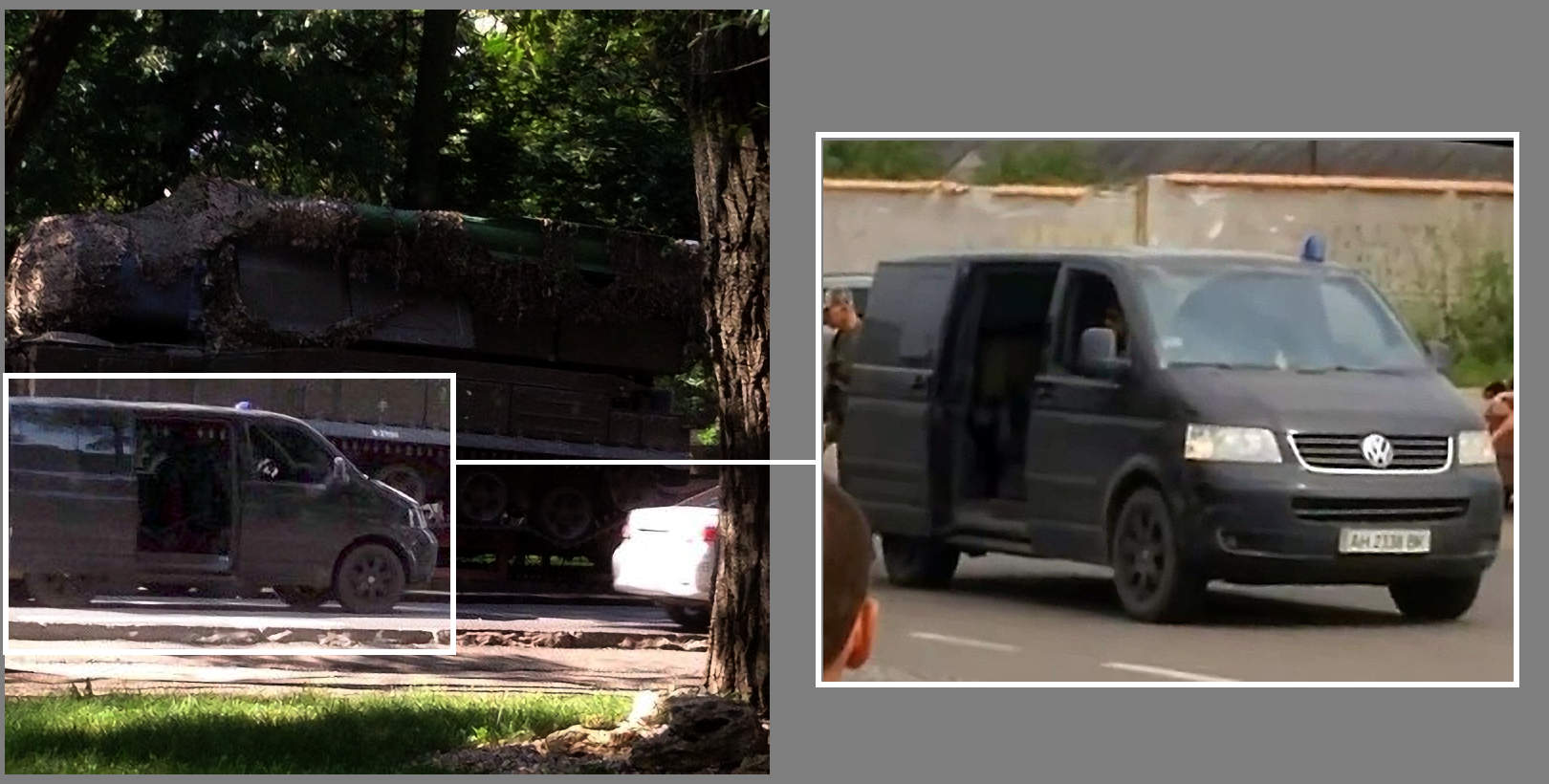 Update: The photograph has been geolocated to Donetsk. Please see our article here for more information.

Do you have more information about this photograph or the location it was taken? If so, please send information in English, Russian, or Ukrainian to the JIT via their email (contact@jitmh17.com), VK page, or WhatsApp (+31683559290). You can also comment on this article or tweet to us (@bellingcat) to discuss the geolocation of the photograph. We are also attempting to geolocate the image through the crowdsourcing platform Check.

This new image is the ninth photograph or video showing Russian Buk 332 in eastern Ukraine, along with a satellite image taken on 11:08am on the day of the tragedy showing the missile launcher in Makiivka, Ukraine. While the photograph does not seem to provide us any new details shedding light on the events of July 17, 2014, it does solidify the Bellingcat’s claim made in November 2014 that Russian Buk 3×2 (now known as 332) from Russia’s 53rd Anti-Aircraft Missile Brigade was the murder weapon in the MH17 tragedy.

Before today, there was little room for doubt in asserting that Russia’s Buk 332 downed MH17. After today, with the ninth piece of visual evidence publicly available showing the weapon belonging to the Russian Armed Forces in eastern Ukraine, there is no room left at all for doubt.