One of the most contentious and important points of the investigation into the downing of MH17 is the launch site for the Buk missile that caused the tragedy of July 17, 2014. The newly released Dutch Safety Board (DSB) investigative report dismisses all alternative scenarios other than a Buk missile launch, including the possibilities of air-to-air cannon fire and an air-to-air missile. Thus, the remaining and confirmed scenario—downing by a Buk missile carrying a 9N314M warhead—becomes the sole focus of the international investigation. While the DSB did not assign blame (as it is explicitly disallowed from doing this), it did provide vital clues as to who was in possession of the Buk system that downed MH17.

This article will analyze the available information from the DSB report and remarks from the head of the DSB investigation. This information will be compared with the launch sites proposed by Almaz-Antey, Christopher Miller & Roland Oliphant (previous discovered by Ukraine@War and @Wowihay, later confirmed by Bellingcat, and other studies), Correct!v, the Russian Ministry of Defense, and Meduza writer Sergey Parkhomenko. Additionally, this article will parse the reasons for the various conflicting launch sites proposed by Almaz-Antey in the DSB and its own two press conferences.

The DSB conducted a thorough investigation into the possible flight paths from a Buk missile, taking into account simulations conducted by the Dutch National Aerospace Laboratory (NLR), the Kyiv Research Institute for Forensic Expertise, and the Russian Buk missile manufacturer Almaz-Antey. Additional research from the Netherlands Organisation for Applied Scientific Research (TNO) was used in various models of warhead detonation, though this organization did not carry out their own flight path simulation. Each of the three organizations carrying out flight path simulations used different data sets, as seen below, which assumed that a 9N314M warhead exploded above and to the left of the plane’s nose. As described later in this article, Almaz-Antey’s flight path simulation used the data set provided by the TNO. The simulation data provided by the NLR is by far the widest, encompassing a 320 square-kilometer area. Speaking with journalists, Tjibbe Joustra, head of the DSB investigation, confirmed that the area that the Buk was fired from was controlled by separatists on July 17, 2014. 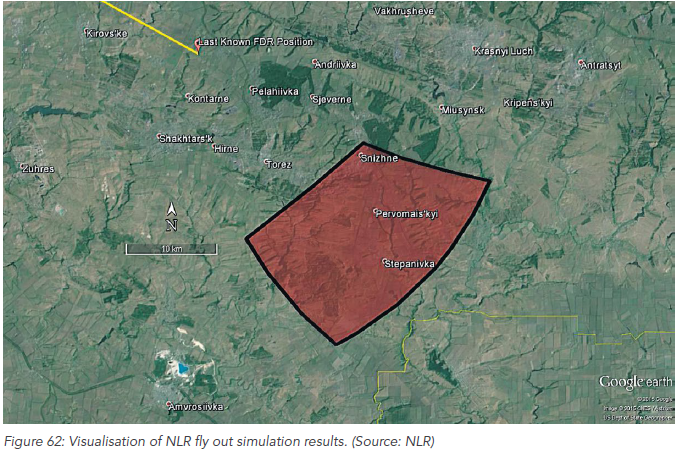 The simulation carried out by the Kyiv Research Institute with NLR’s data is much narrower, with only a 4 square-kilometer area: 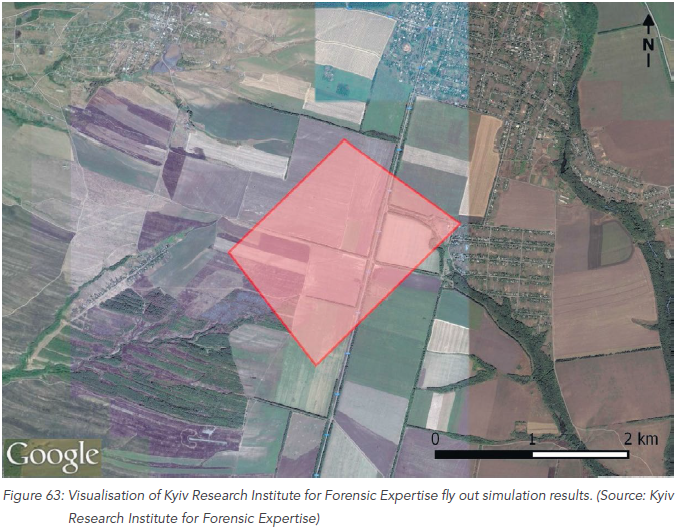 The Almaz-Antey simulation is not quite as simple as those from the NLR and Kyiv Research Institute. The Russian simulation used the data set provided by the TNO:

However, as noted in the DSB report, the calculations from Almaz-Antey are consistent with the Kyiv Research Institute and NLR flight path simulations. The Russian Buk manufacturer carried out separate simulations for a 9M38 missile, and another for a 9M38M1 missile. 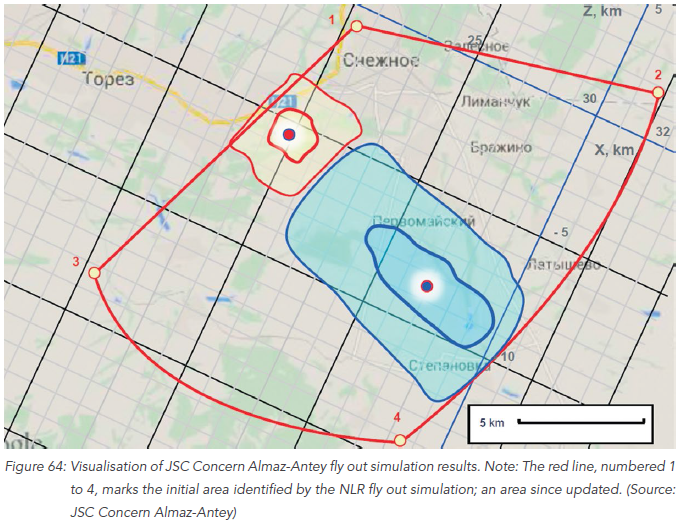 The red outline with numbered corners should be ignored, as it denotes outdated calculations from the NLR. The Almaz-Antey simulated flight paths for the 9M38 and 9M38M1 missiles are marked by the red and blue outlines (respectively).

The DSB was clear in saying that no other positions, when considering the pattern of damage on MH17, is possible for a Buk missile launch. Thus, all launch sites outside of the combined areas from the three simulated flight paths are impossible. 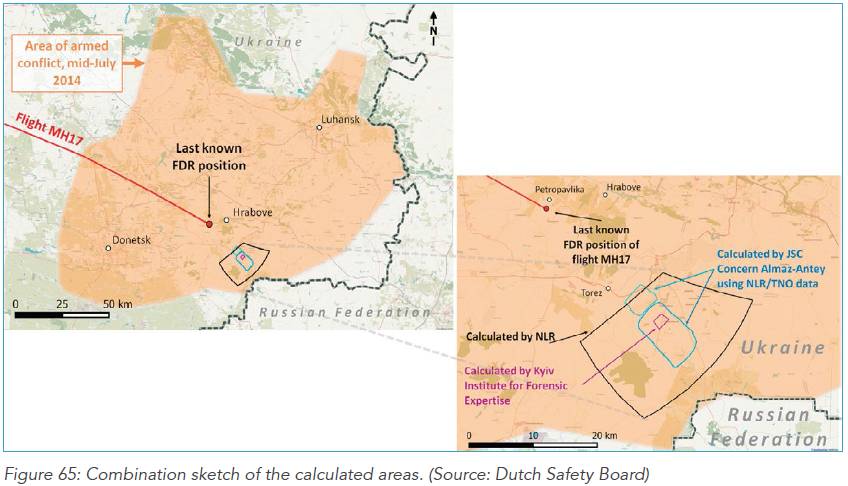 The three simulated flight paths—including the two from Almaz-Antey with differing missile types—are compatible, with the exception of a small sliver in the northwest of the Almaz-Antey 9M38 missile simulation. However, as will be detailed in the following section, there are major caveats with the Almaz-Antey flight path simulation, as explored in the report’s appendices and Almaz-Antey’s two self-contradicting press conferences.

In viewing the launch site map provided by the DSB, it is easy to initially think that Almaz-Antey is in near-complete agreement with the Ukrainian and Dutch scientists and engineers. However, as Almaz-Antey’s two (self-contradicting) press conferences and Appendix Y of the report illustrate, the Buk missile manufacturer has quite divergent ideas regarding the plane damage pattern and missile detonation point, and thus the launch site location. As you see in the table, the azimuth and elevation of the missile in Almaz-Antey’s calculations are drastically different than the accurate models. The difference in azimuth (-27 degrees compared to -72) is due to the differing incoming location, with Zaroshchenske compared to south of Snizhne. The Almaz-Antey calculated elevation of 22 degrees is due to the same reason. According to the rocket trajectories provided by Almaz-Antey, a 9M38M1 missile fired 16km from MH17 will strike the target at an elevation of 22 degrees–the same as the calculations that Almaz-Antey provided to the DSB. The launch site near Zaroshchenske proposed by Almaz-Antey is approximately 16km from the MH17 impact point, and a bit further than 72 degrees away with the calculated azimuth. The 9M38 missile engine stops after 15 seconds, while the 9M38M1 lasts 20 seconds, altering the missile’s elevation at strike point. In its initial findings, Almaz-Antey found that the 9M38M1 was used with a 9N314M warhead, thus the calculations submitted to the DSB were made under the assumption that the 9M38M1 missile was used. In their first press conference, Almaz-Antey went out of its way to confirm that all of its test data pointed to an 9M38M1 missile with a 9N314M warhead: Therefore, we can summarize the various Almaz-Antey launch sites after interpreting the detonation point data in Appendix Y. Let’s take a second look at the Almaz-Antey flight path simulations while using the TNO detonation point data (with more credible azimuth and elevation calculations). The northwestern, red zone is for the 9M38 missile, and is quite unlikely due to its close proximity to heavily populated areas. The southeastern blue zone, which closely matches the site proposed by Ukraine, Bellingcat, and others, is calculated for the 9M38M1 missile. The 9M38 missile area was approximately 20 square kilometers, while the 9M38M1 area was 63 square kilometers.

Comparisons Between All Proposed Launch Sites

The embedded Google Map below compares all available data provided by Almaz-Antey and the DSB on the range of potential launch sites. Four proposed launch sites have been juxtaposed with these areas. Click through the map to view a legend to differentiate the various areas and markers. Thank you to Bellingcat contributor Klement Anders for compiling the area data on the below map.

Clearly, the Miller/Oliphant and Parkhomenko launch sites fit perfectly within the zones calculated by all parties using the most credible detonation point data. The Zaroshchenske sites are, in contrast, not even within the most extreme range of the broad area calculated by the NRL. Additionally, the launch site proposed by Correct!v is not within any calculations from the Dutch, Ukrainians, or Russians.