Freelance journalist Billy Six has recently come to the attention of the world’s media after publishing previously unpublished footage of the MH17 crash site filmed shortly after impact, as well as featuring in Russia Today’s recent MH17 documentary. In this interview with Bellingcat, Billy Six details some of his other investigations into the events surrounding the downing of Flight MH17.

Can you start with your thoughts on the debate over MH17?

Unfortunately public discussion on crash of Malaysian Airlines airliner on 17th of July 2014 has left its rational pathway. There are too many false stories distributed. I´m distressed that the public at large seems to lose interest due to confusion.

You’ve been to Ukraine yourself investigating the circumstances around MH17, including the video filmed in Lunhansk. Can you tell us about that?

Yes, I´m ready to confirm what I know about the famous 14 seconds video which shows a BUK missile launcher on a truck trailer – with at least one missile missing.

As you know Russian officer lieutenant Andriy Kartapolov gave a speech on 21st of July 2014, saying that the car billboard which is visible in the video shows “Dnipropetrovsk Street number 34” in Krasnoarmiisk town as address of car showroom.

And you visited the street itself?

I went there on 14th and 15th of December 2014 to check that place. Indeed there was a car dealer in Dnipropetrovsk Street number 34, but its chief Mr. Jura B. told me that this poster doesn´t belong to him. He didn´t know how to comment on the fact that Russian government announced something different. But he answered that there hasn´t been any state authority or journalist asking him before about this story. He echoed it to me via e-mail on 31st of July 2015. It seems in Ukraine this information was never taken seriously. 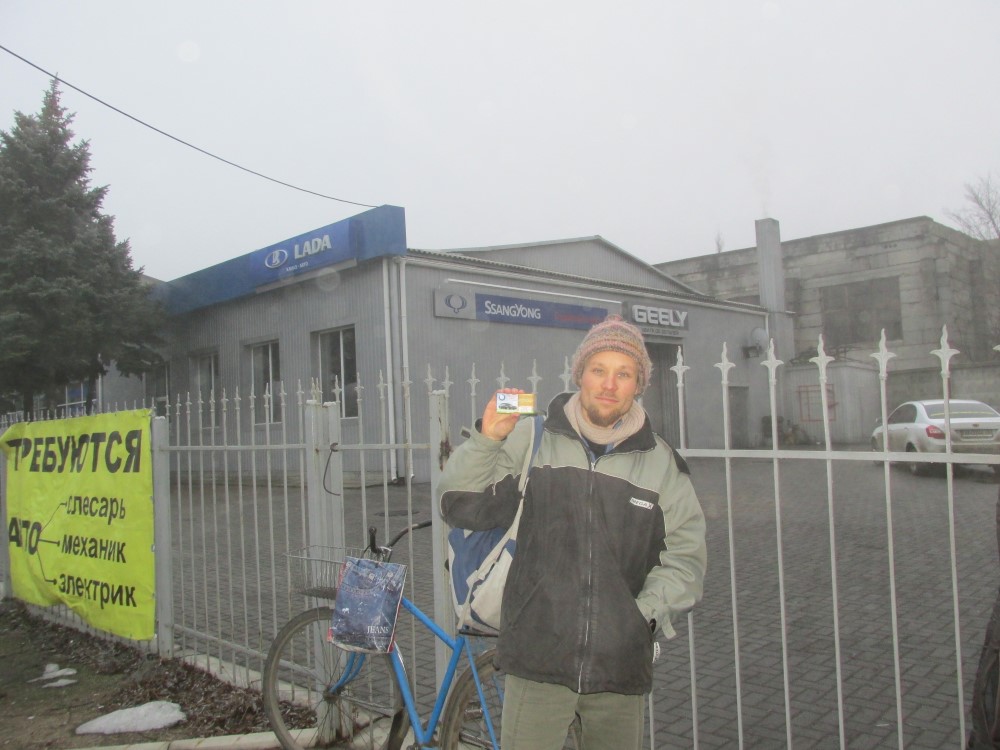 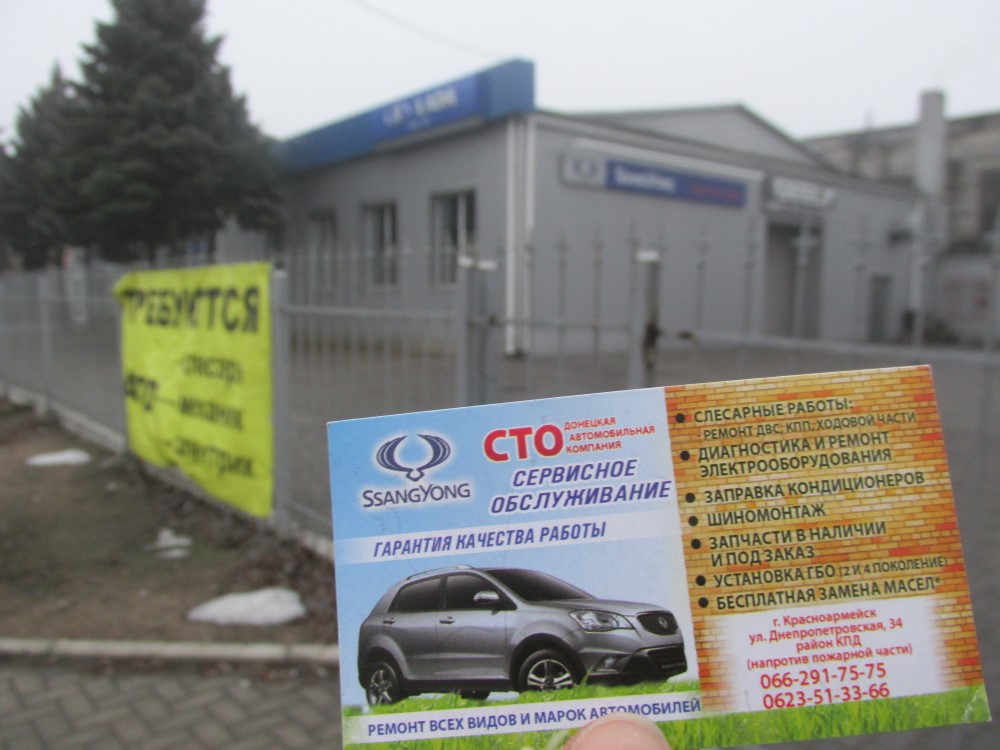 Did you speak to other people in the area?

All people in the streets of Krasnoarmiisk who I asked told me this place wouldn´t be Krasnoarmiisk, although some confirmed to have seen Ukrainian BUK launching systems passing in Krasnoarmiisk and neighbouring Dimitrov.

Do you look for anything else in Krasnoarmiisk?

On the internet Gorky Street number 49 was claimed to be that place in the video (see here) – but I didn´t find any hint for that. Shop owner at this place didn´t do either. That place looks completely different. Furthermore Krasnoarmiisk doesn´t have trolley wire. 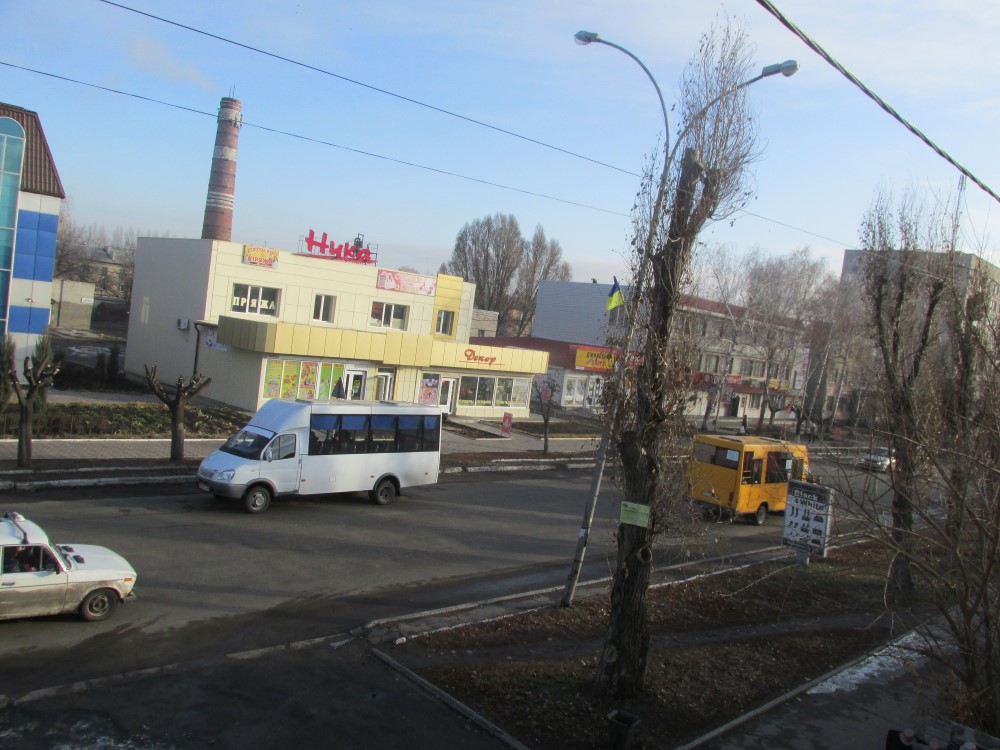 What did you do next?

When I read your posts about the location at Pavlivska Street / Nechuya Levyts´koho Street, I went there to check this one. I explored the area and talked with people of the flats opposite that big street on 27th, 29th, 30th and 31st of January 2015. People confirmed that a lot of army vehicles were transported along this street. Well, each day I could see myself. But nobody confirmed a BUK launching vehicle. However several hints matched with the original video. I don´t need to repeat them, you´ve published it already. Just a new car poster had been pasted over the old one. And the metal chimney behind the billboard had been bent. 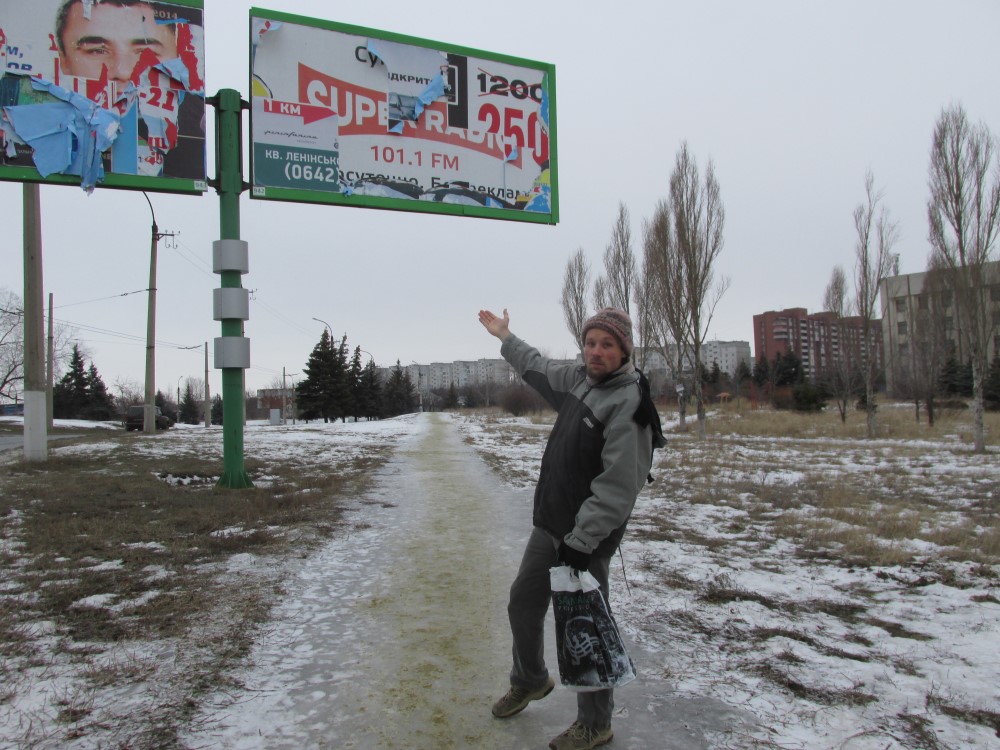 The chimney visible in the Luhansk video. Left, from Yandax Maps. Right, from Billy Six.

And you managed to find the person who filmed the video?

On 30th of January 2015 I met the person who told me they had made this video. I don´t want to mention the exact flat in order not to endanger those people. But I can say that it was from 4th floor of the Soviet style apartment buildings overlooking the road. From a window in the corridor I was able to have a look, and it nearly matched from there. I made a video from here.

My meeting happened in the afternoon, approximately between 1 to 3 pm. I was ringing the bell. A bald man aged between 30 to 40 opened the door. When I tried to tell him that I´m journalist, he became angry. As I didn’t speak Russia I called a friend of mine from Lugansk who was currently in Kiev who did. She explained to him that I was searching for the person who had made the BUK video. He became even angrier and closed the door. I continued talking with my friend on phone, discovering that she hadn´t gotten any answer. So I told her that I would try again.

This time a small woman opened the door. She was between 40 to 60 years old, smiling, a nice character. Opposite type of the guy. She asked me to come inside the private corridor of the apartments. It was for storing the shoes of 2 renters. I gave her my phone to talk to my friend in Kiev as she didn’t speak English. The flat straight ahead was the one with the windows to the street side. But the woman lived in the flat to the right. The guy locked the door and looked at me in an evil way. He demanded to see my press accreditation and passport, using abusive Russian words all time. It was a moment when I started to fear about the whole situation due to the fact that I wasn´t free anymore … caught by someone who seemed to be afraid himself or a psychopath.

The woman returned after some minutes of conversation on the phone – and gave it to me. My friend told me that “she made this video”, but she had mostly asked about me. My goal was to know about the time this video has been made, as well as getting the raw file. But the guy came closer to me, starting to raise his volume of insults. I gave him the number of my Lugansk host from whom I´ve rented a private room – in order for him to feel certain about me. He called the owner and questioned about me – by this way I got his phone number. The woman who claimed to have filmed the video came back and asked me whether it would be a problem to call the police. I said she could do it, no problem with me. She nodded without any emotion. The man showed me something which could have been his passport, but wrapped by Lugansk Peoples Republic cover. I understood that he wanted to emphasize his alleged pro-rebel position. I wanted to come away from this uncomfortable situation, saying that I would feel locked up. The man answered this wouldn´t be true … unlocking the door and kicking me out. I took a deep breath.

What happened once you left?

All this lasted 23 minutes … and my friend who was all the time with us on the phone encouraged me to run away – police would come! But I waited. There was nothing to hide. But the police didn´t arrive for about 30 minutes. So I left, taking some videos of the highway. Because of this I was arrested after some minutes.

Can you tell me about your arrest?

The police who brought me to “Ministry of State Security” didn´t know anything about what had happened in the flat before. Intelligence gave me food and a room to sleep. No interrogation.

The next day chief officer wanted to see me. He called himself Roman Anatolitsch from Sevastopol. “Sorry for your detention”, he said. So I saw a chance for conversation. I asked him for his opinions regarding the BUK video … for some investigation in a case of which he believed rebels to be innocent. He just smiled. Other things were important, MH17 not. “You can research as much as you want“, Roman said. “We don´t care what is written in Western papers – we are unable to keep up at that level.” I could go, not a single image on my confiscated camera was deleted.

Did you return to the apartment?

In the afternoon I returned to the scene of interest. Another friend of the Kiev-based one helping me on phone yesterday came with me personally for translating. Another woman was standing on the window from which Buk video has been made. She was smoking. The window was always open, even though it was cold winter. I very clearly announced my will to buy information. But she answered: “You have been here yesterday with our (inside-corridor) neighbours already. I don´t have anything to say.” However we found a way to come inside the building once more. But ringing the bell at floor number 4 was without success. We waited. After some time a man arrived who wanted to meet the same people. He explained the small woman from yesterday was the aunt of the aggressive man, and he was his brother. Asking about the Buk video he claimed all of this to be a “bullshit story” in a very trustable way. But he also didn´t know that his brother and the aunt had left Lugansk. We discovered it after some minutes, reaching him on the phone. He said: “Everything was told. Don´t ask anything more.”

On August 4th 2015 I received the message of another translator of mine whom I´ve asked to call once more. His (unedited) answer: