This article appeared on Planet Stories

Lydian International, a mining company now registered in Jersey in the United Kingdom, intends to conduct a large-scale mining project for gold in the Armenian mountain of Amulsar, approximately twelve kilometers away from the southern Armenian spa town of Jermuk. Lydian began exploratory works for the Amulsar Gold Project in 2006, and after submitting several environment and social impact assessments (ESIA) to the Armenian government and receiving their approval, the company began construction works in 2015, planning to begin full operation in 2018. In 2016, Lydian has submitted an ESIA to the European Bank for Reconstruction and Development after applying for over $11 million (CAD). According to the project, 10 million tons of ore, containing 7.8 tons of gold, would be extracted from the earth each year over a minimum period of 10-11 years. In total, over 65 tons (2.1 million ounces) of gold are projected to be extracted from Amulsar over the project’s lifespan, with an annual contribution of 1.4% of Armenia’s GDP ($185 million/year).

For years, environmentalists and independent experts in Armenia have lodged complaints and protested against Amulsar project, insisting that the mining and processing of the gold will cause irreparable damage to both the environment of the region and the health of the local residents. One reason for this is because the mining area is near Jermuk, a spa town renowned for its mineral waters, and its nearly 5,000 residents. Up until the 2016 ESIA, Lydian did not designate Jermuk as a community that would be affected by the project, claiming that the mine posed no threat to the environment. Experts, however, are convinced that underground blasts at the mine will upset the hydrological balance in the area, causing a change to the mineral content of Jermuk’s waters. What’s more, the mine may cause serious harm to the town’s tourism, with potentially fewer people wishing to visit a spa town with a nearby operating mine.

The environmental risks associated with the exploitation of Amulsar’s natural resources, however, go far beyond Jermuk. Some experts have argued that the operation of the mine, located at the borderline of Vayots Dzor and Syunik provinces, could result in the pollution of Lake Sevan with chemical compounds. Lake Sevan is the largest body of water in Armenia and the south Caucasus, and one of the largest freshwater lakes in all of Eurasia, providing not just drinking and irrigation water to the region, but also 90% of the fish and 80% of the crayfish catch in Armenia. The Amulsar mine is located in the drainage basin of the lake; sulfidic mine tailings bear the risk of contaminating the waters in the Kechut and Spandaryan reservoirs, which feed directly into the lake, and, subsequently, Lake Sevan itself.

There are also concerns about the fact that Lydian International – which has no prior experience in mining – plans to use cyanide heap-leaching to recover gold from Amulsar. Heap-leaching, as stated on Lydian’s official website, “is a process whereby precious metals such as gold and silver are extracted from rock by placing mineralized material on a lined pad (a base) in a heap and irrigating with a leaching solvent, such as cyanide or acid. As the solution percolates through the heap, the metals contained in the rock are dissolved into the solution and this solution is collected as it drains from the base of the pad into lined collection ponds. Further processing of this solution allows for the metal to be extracted and smelted.” The company claims that is has taken “all measures to ensure that no contaminants are leaked into the wider natural environment. Thus not only Sevan, but all surrounding natural receptors — soil, water and air will be strictly protected.”

Cyanide heap-leaching, or gold cyanidation, is not a rare process, as it is used in the vast majority of gold mining and production operations. However, there have been disastrous consequences on the ecosystems of several countries after accidents. One such example took place in January 2000 in Romania, when the byproducts of gold mining (which included cyanide) spread throughout nearby farmland and rivers, including into the Danube, causing what the BBC called the “worst environmental disaster since the Chernobyl nuclear leak.” However, we do not have to look back almost seventeen years to see the potential consequences of using cyanide heap-leaching in the gold production process, as “more than a million liters of cyanide solution entered nearby rivers” after an accident took place at the Veladero gold mine in Argentina in September 2015. Environmentalists in Armenia fear that Lake Sevan and nearby reservoirs could suffer a similar fate if an accident were to occur.

The area that Lydian purchased and currently constructing their heap-leach facility is located less than a kilometer away from the village of Gndevaz, where agriculture remains the main source of income for the local population. Over the years, both the villagers and environmental activists have voiced the concern that the impacts of the heap-leaching would be disastrous for local economic conditions, as fewer people would risk buying produce from a village so close to a potentially poisonous process.

With the help of Planet Labs, Bellingcat is monitoring the construction of the Amulsar project by reviewing satellite imagery of the mining site, the cyanide heap-leaching facility (HLF), and nearby bodies of water. 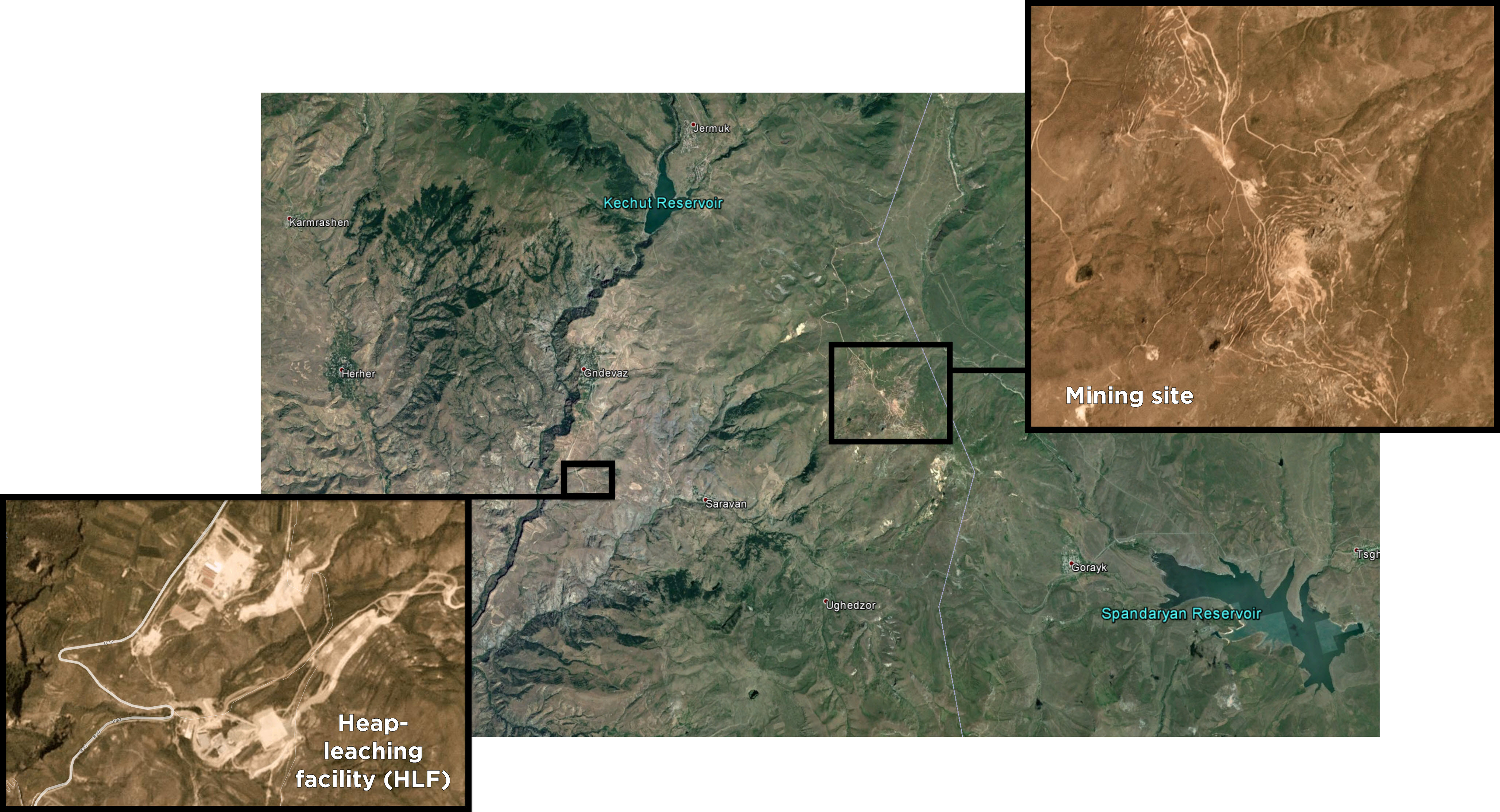 There is a wealth of satellite imagery available from Planet, with around twenty satellite images available every month, in comparison with fewer than one satellite imagery per year (on average) on Google Earth. Monitoring the construction of the HLF is especially useful with this satellite imagery, as maps included within the technical documents published by Amulsar (including the most recent one, here) provide a detailed map of where various sections of the facility will be constructed. 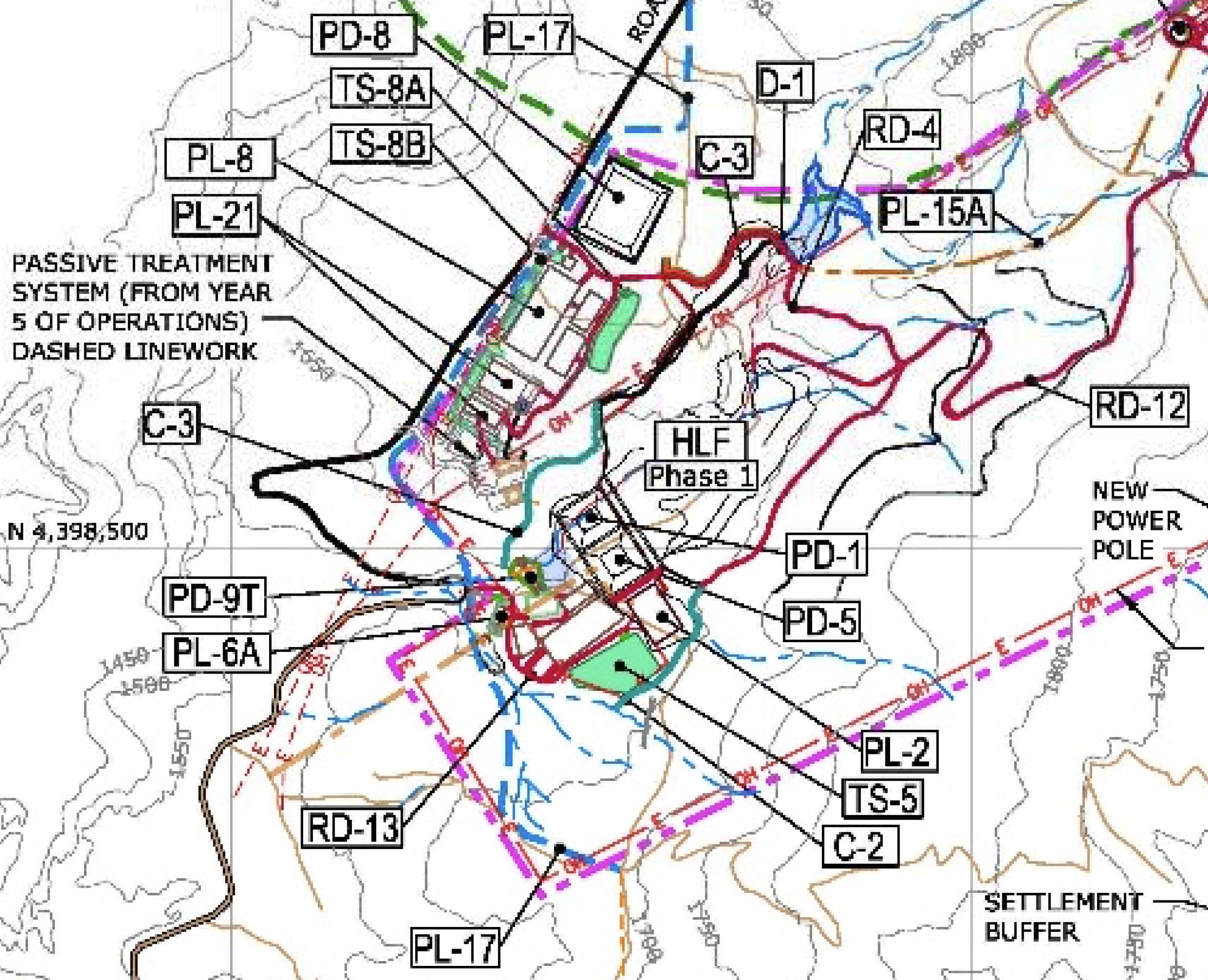 A key to this map can be viewed here.

), a number of maps were provided that will be vital in ongoing satellite monitoring of the project. For example, in the map below, Lydian lays out the planned access roads and areas for the project, compared against vital infrastructure sites, such as a drinking water pipeline and gas pipelines. 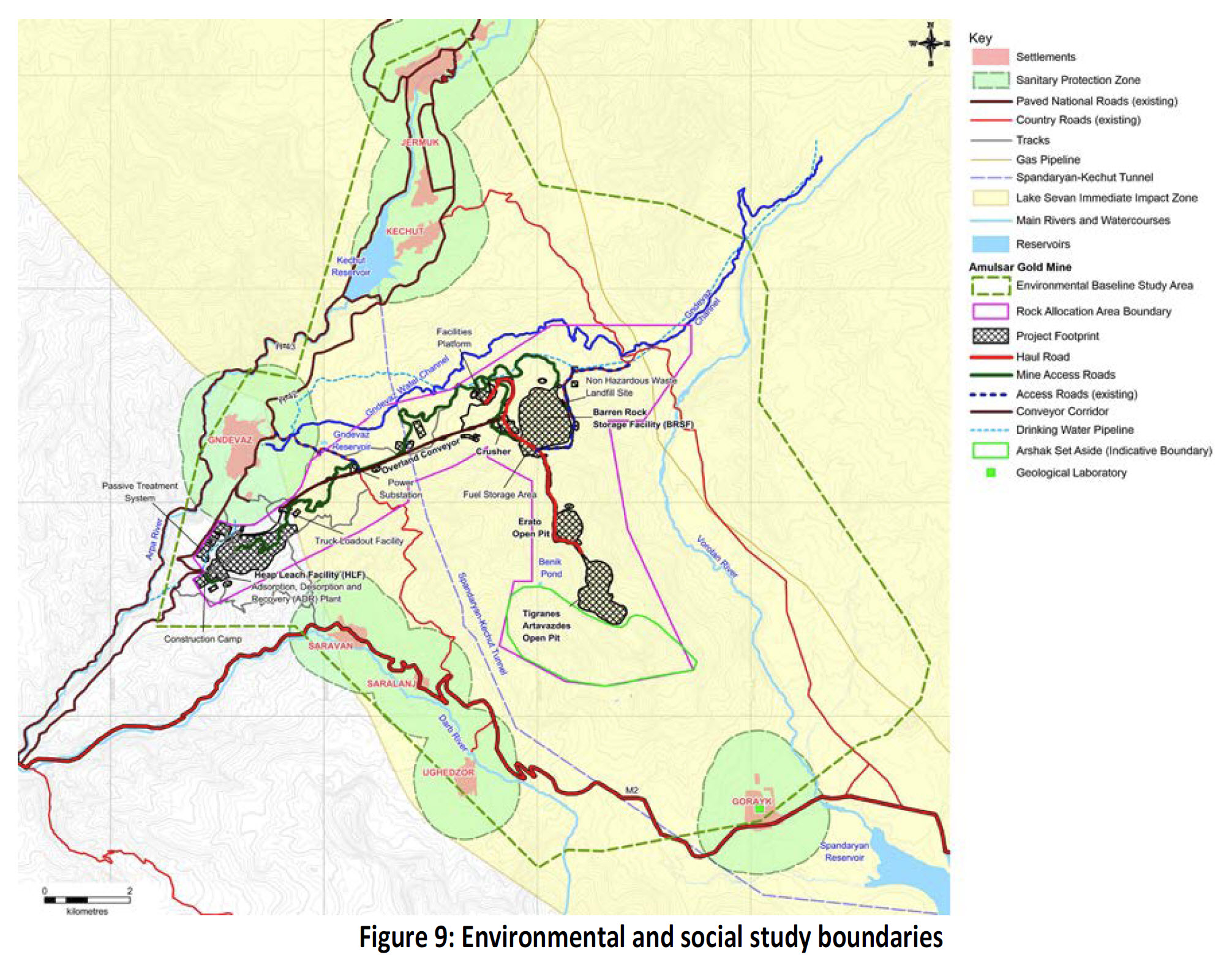 Another map in the ESIA provides data that would not be easy to determine from satellite imagery alone, such as the irrigated arable lands and hayfields in use by the local population, in comparison with the planned areas that the mine project will use and key infrastructure locations. 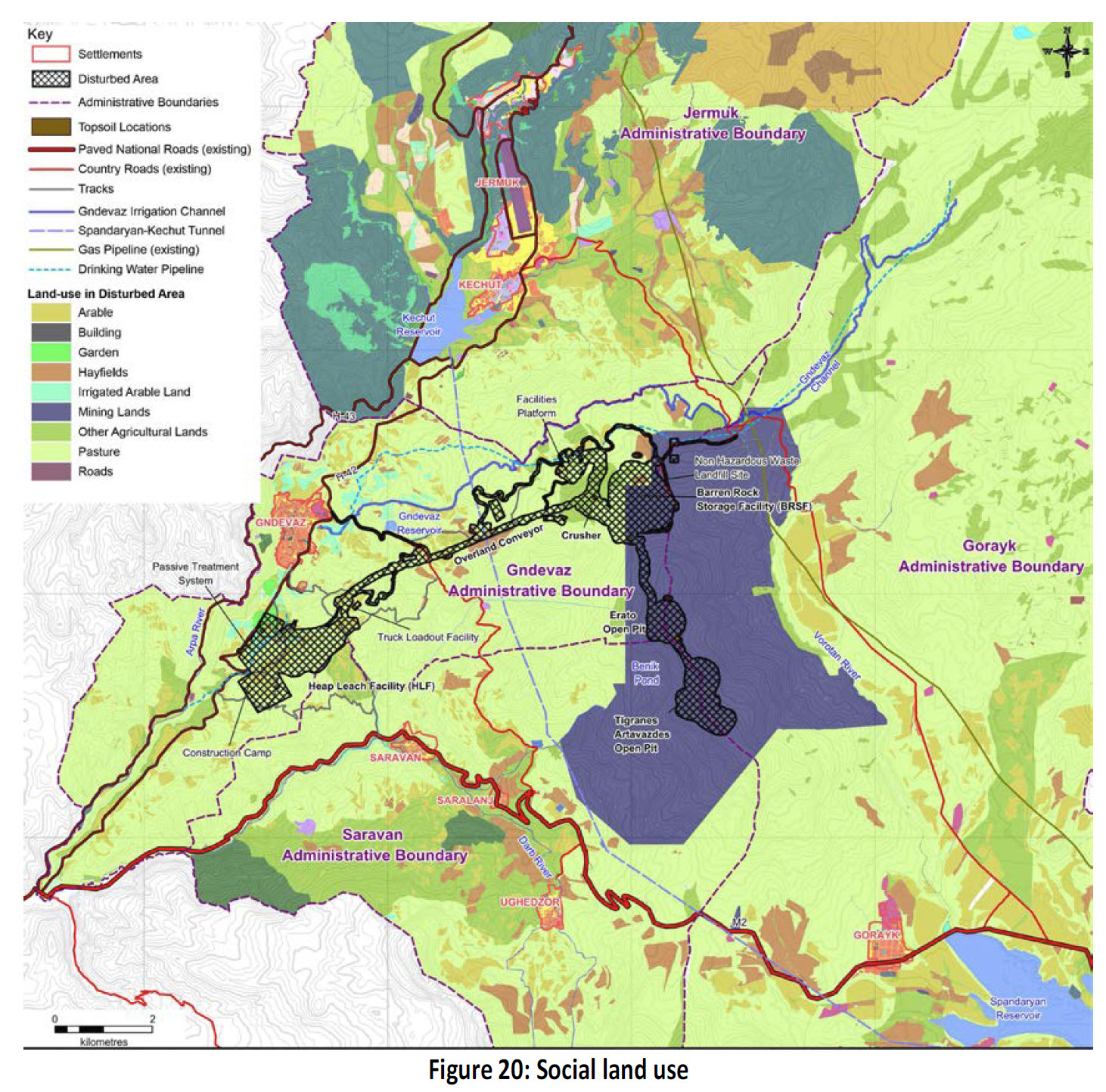 Bellingcat will continue to monitor the progress of the Amulsar project and cooperate with local environmental NGOs to supplement their work with the expertise we can provide in open source research. Activists and researchers on the ground in Armenia can contribute far more to the monitoring efforts of the Amulsar project than us, making it important that our digital research efforts are able to complement their investigative work. We also hope to continue investigative work into the project, blending digital monitoring efforts and traditional investigative journalism. Going forward, we hope that our monitoring efforts will also raise awareness of this mining project, which has tremendous significance in Armenia, and bring about greater accountability and transparency to the project.

Aric Toler contributed to the writing and research of this article. 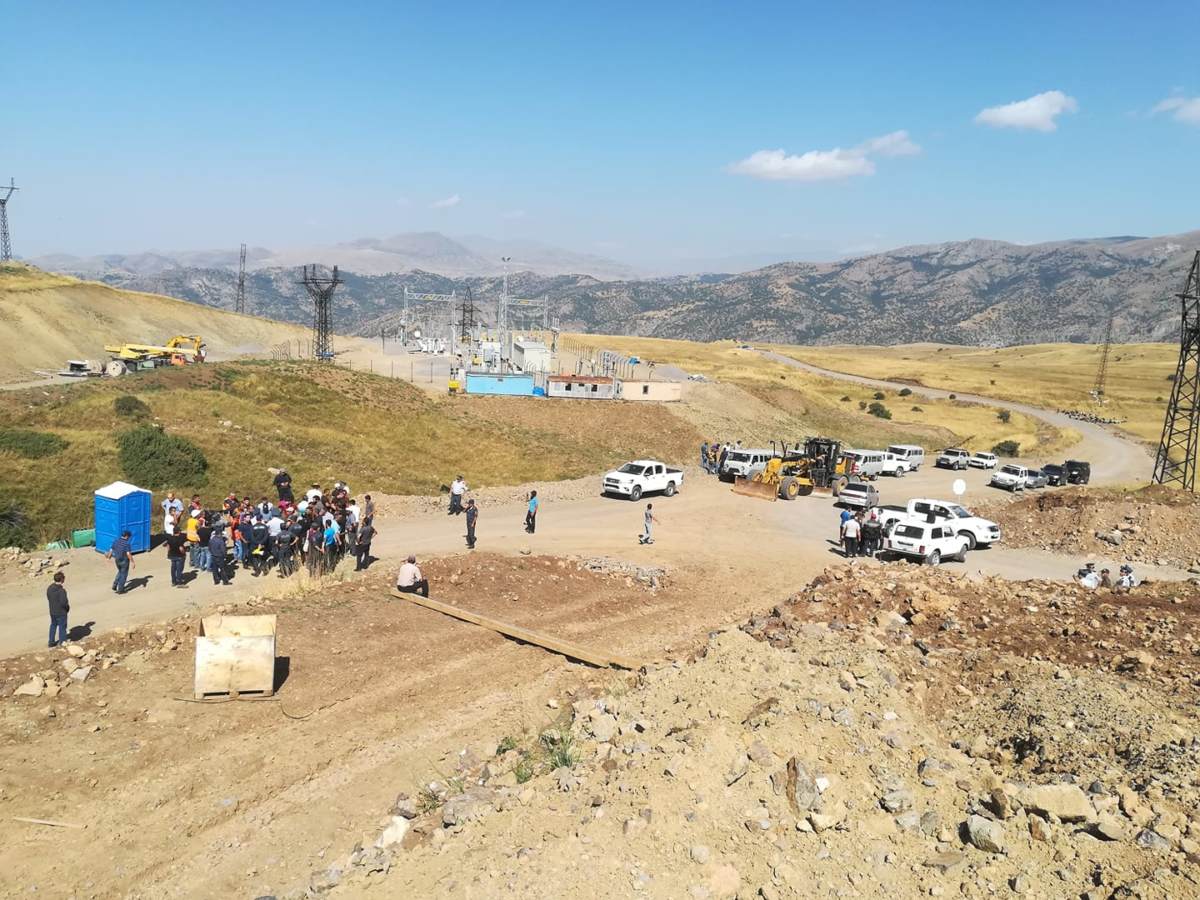