Did Someone Fake this Picture of Restrained Men in Damascus?

Has the Syrian government been forced to chain young men together to recruit them into the military? An image purporting to be from Damascus certainly gives this impression, showing several young men being forced into a van, apparently tied together with a chain or rope, with soldiers standing by.

The image and the explanation for what it allegedly portrays are making the rounds nearly two months after a presidential decree by Assad on October 9, 2018, granting a general amnesty for four months to men who have illegally avoided conscription.

The apparent detention of men for military service depicted in this image caused considerable controversy on Syrian social media. Questions regarding the treatment of conscripts were brought up in discussions within pro-government networks on social media and even surfaced on pro-government media.

After this photo emerged, a version of the image without any restraints on the men also began to circulate. These users claimed that the picture without the restraints was the original and the version with restraints had been manipulated in an attempt to smear the Syrian government.

This article will assess the context around the different versions of the picture in an attempt to identify which one is more likely to be the original. It does not use techniques such as Error Level Analysis, which is unlikely to be an effective tool to analyse these images due to their low quality. It should be noted that this investigation uses currently available sources of information, and further information regarding this matter may yet emerge.

As timestamps on social media posts vary depending on platform, all times given will be in UTC.

We are confident that the location depicted is indeed in Damascus, in a neighbourhood named Mezzeh. This video shows the same area during a protest in 2012, which we can then use to geolocate the original photo to a place immediately outside the Zahra Mosque.

Geolocation — Note the structure of the windows and the posters on the right. (bottom: photo, top: video from 2012): 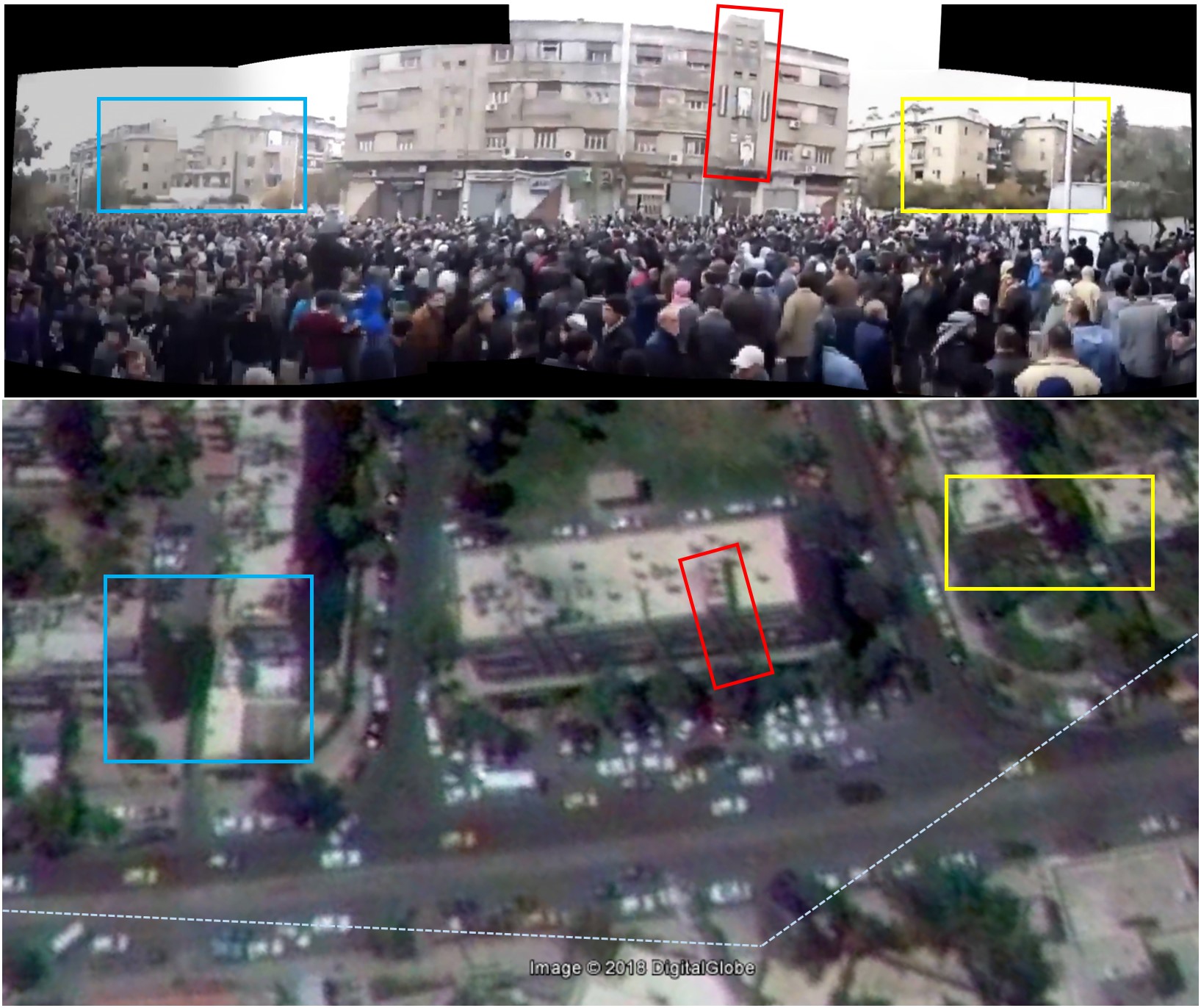 This can be further confirmed using this dashcam video from 2018, in which the vehicle drives past this exact spot.

We can also establish that this location seems to be some kind of assembly point for conscription. Images and a video which can be geolocated to the park immediately to the south-west claim to depict men who are about to start their compulsory military service.

Screenshot from Youtube video with the caption: “Young men from Daraa and Swaidah in front of the Mezzeh branch reporting for military service”

The earliest version of this image we could identify which showed no restraints on the men was posted at 0318 UTC on December 4, 2018 by Maram Susli, also known as PartisanGirl, a notably pro-Syrian government activist based in Australia.

Susli also claimed that the image featuring restraints, to which she was responding, had been photoshopped. We asked Susli if this was the original image and where she had obtained it. She replied that she had “found it online” but declined to share an exact source, stating that someone else had posted it online before her. 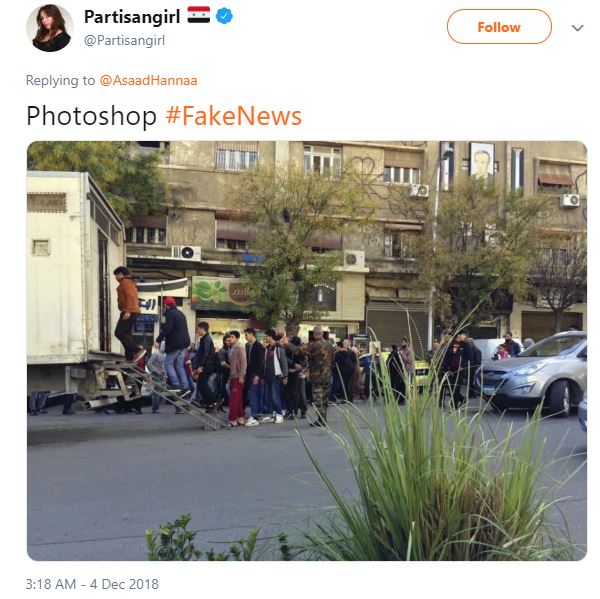 The earliest version of the photo showing restraints which we identified during our investigation was posted on Facebook by @waqee3sory, what appears to be a pro-government page, at 2105 UTC on December 2, 2018.

However, this image was of relatively low quality. The earliest good quality image we identified was posted by a pro-government Facebook page named “syrian.martyres2” at 2128 UTC on December 2, 2018 — still notably earlier than the one posted by Susli. A comparison of the two versions of this image reveals information which indicates that the version featuring no restraints is less likely to be the original. The best indication of this is that the version posted by Susli is slightly smaller than the version shared by syrian.martyres2 on Facebook. 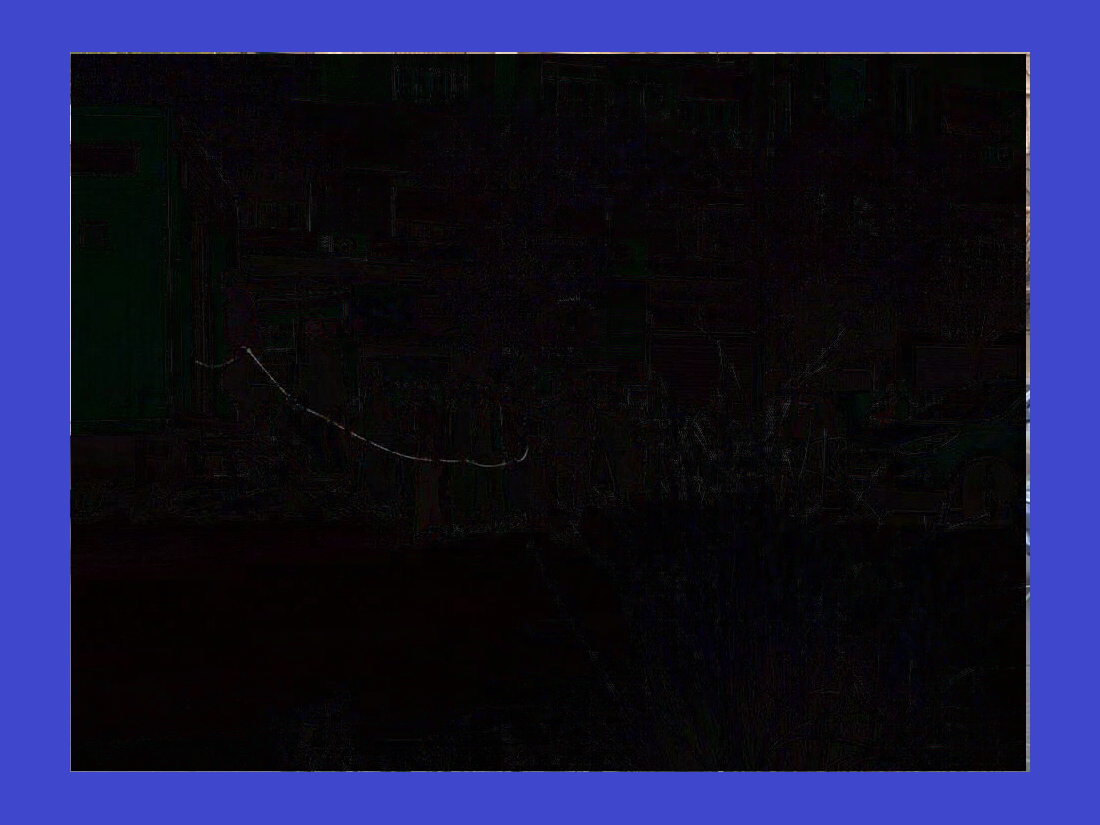 Comparison of the two versions

The above image is a comparison between the two versions of the photo. The dark area indicates where the images match. The obvious difference is the restraints, but this does not tell us anything by itself; it merely shows that one version has the restraints and one does not.

Comparison of the two versions (Gif)

It should be noted that some users have noted that the restraints in both photos appear different lengths between the individuals. Since we do not know exactly what these restraints are, and the resolution of all images is too low to examine them properly, we cannot be sure precisely why this is the case. It may be that the wrist connections are merely placed at irregular intervals, or if the connections are formed around the main line, allowing them to slide along it. There does of course remain the possibility that these restraints were edited in, although for the reasons below we believe this is unlikely.

There remains the possibility that the version showing restraints has been manipulated. However, by assessing what we believe to be the provenance of the original photo, this appears relatively unlikely. As we stated earlier, the earliest posted version of the photo we found had been posted by waqee3sory, a pro-government page. The text, quoted in part below, which accompanied the picture expressed dismay at the manner in which these men were being detained and argued that it was incompatible with a decree made by President Assad.

“We all rejoiced when the President issued a decree pardoning all the military reserve absconders, in Syria and abroad. All the young men, inside and abroad, were happy. Some decided to return within two months to settle their situation and see their families. The young men here breathed a sigh of relief
But the joy lasted only a week ?. Only one week later, the first reserve batch were summoned
How is it possible that a presidential decree can only last a week!!!
– The President issued a brave decision to drop all requests for military reserve
– The Minister of Defense confirmed, through the parliament, that the decree and the order came from the Supreme Commander, and that requests for military reserve are only issued according to need – and currently there is no longer a need. Then he said that if men answer the call, mandatory military service should suffice, and there will be no need for reserves in the near future, nor on the long run.

I took this photo yesterday in Tale’t il Iskan in Mezzeh. Young men in their prime, seized at checkpoints, whose names are on the lists of either mandatory military service or reserve…. Observe, see how they are tying them like cattle and jamming them in a closed van like criminals…. How is this [man] supposed to defend the country!!? He knows he’s going to his death… With such a public display, how are they going to encourage the people to join the army?!! So they would defend so and so, and their sons…

Come back, Syrians in the diaspora, come back”

To protect the original poster, we will refer to him using the pseudonym “Adnan.” We checked Adnan’s Facebook page and identified that he was clearly pro-government, and had posted explaining that he had deleted a recent controversial post. We believe that it is a strong possibility that this controversial post was the primary origin of this photo. The explanation was posted on December 3, 2018, at around 2130 UTC, and Adnan stated he made the controversial post “yesterday,” making that post the most likely earliest example of the original image.

Adnan was supportive of the Syrian government and seemed to have been frustrated by the failure of the military to abide by the decree made by President Assad, as well as the failure of the Syrian diaspora to return to fight for the government. Although we understand this makes verification difficult, we have chosen not to link to Adnan’s Facebook page or identify specific details within his post as we do not wish to amplify information which could put him in danger of retaliation.

If Adnan is the primary source, then his apparently sincere intentions indicates that this photo is less likely to have been manipulated. Indeed, to find or create a fake image critical of the Syrian military and then post it on a personal Facebook page seemingly associated with the genuine identity of a person living in Damascus would be virtually suicidal.

A second image has also emerged, showing the same scene shortly before the first photo was taken. The details are virtually identical, but this second photo was taken from a very slightly different angle, and showed the procession at a slightly earlier stage, with the first man visible before entering the truck.

A feature is also noticeable at the bottom of the photo which resembles the bottom edge of a car window. This would fit with the location, as both photos were taken is in the middle of the road heading to the right as you look at the photo: the plants which are visible form part of the central reservation, which can be clearly seen in this video of the same location. 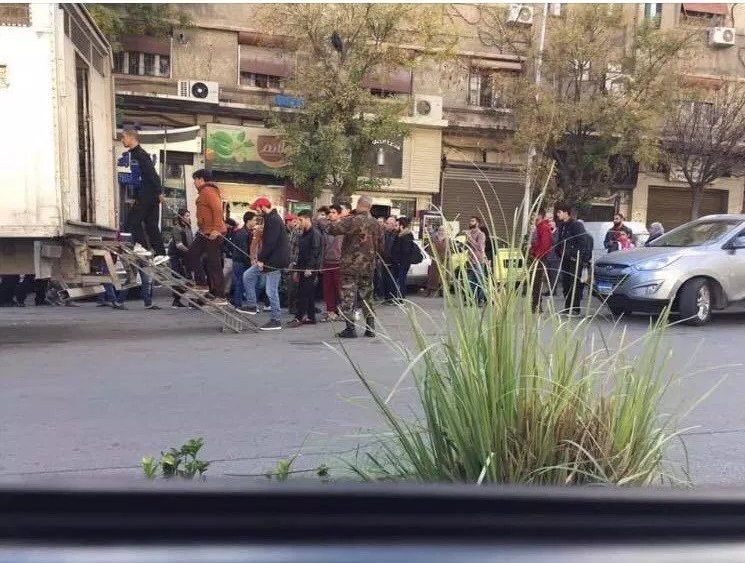 Here is the second image

The resolution of this second image is much lower, but the details mark it as being unique. The earliest version we found of this photo is from a pro-government news report, which posted a cropped and slightly higher resolution version at 1531 UTC on December 3, 2018 (time zone unknown). This second photo supports the argument that the image depicting the restraints has not been manipulated, and is in fact the genuine version. Thus far we have not seen a version of this second photo without restraints, although it should be noted that this second photo’s provenance was not possible to verify.

The one point we can be absolutely sure about is that at least one version of this image has been manipulated.  Although we cannot be entirely certain that the version with restraints is the original, the context in which it was posted and the existence of a second, separate photo depicting the same scene suggests that it is more likely to be genuine.

The amplification of a version of the image without restraints by Susli and Souria4Syrians created doubt about the original photo, despite both of them being noted sources of disinformation (Souria4Syrians has been banned as a source on the Syrian Civil War subreddit, while Susli believes Ebola may have been created as an American bioweapon). As a result, journalists and activists pulled back from the original photo, deleting posts and tweets publicizing it, an entirely rational course of action to take.

Although it is not possible to reach an absolute conclusion in this case, it does highlight the nature of the information ecosystem around the Syrian conflict as a whole, where malign actors, primarily but certainly not limited to those connected to the Syrian government or Russian military, inject doubt using misinformation in an attempt create confusion. Evidently in this case those actors have succeeded, whichever version of the image they created.